After 10,000 miles, Apple’s latest AirPods Pro are my new go-to for travel 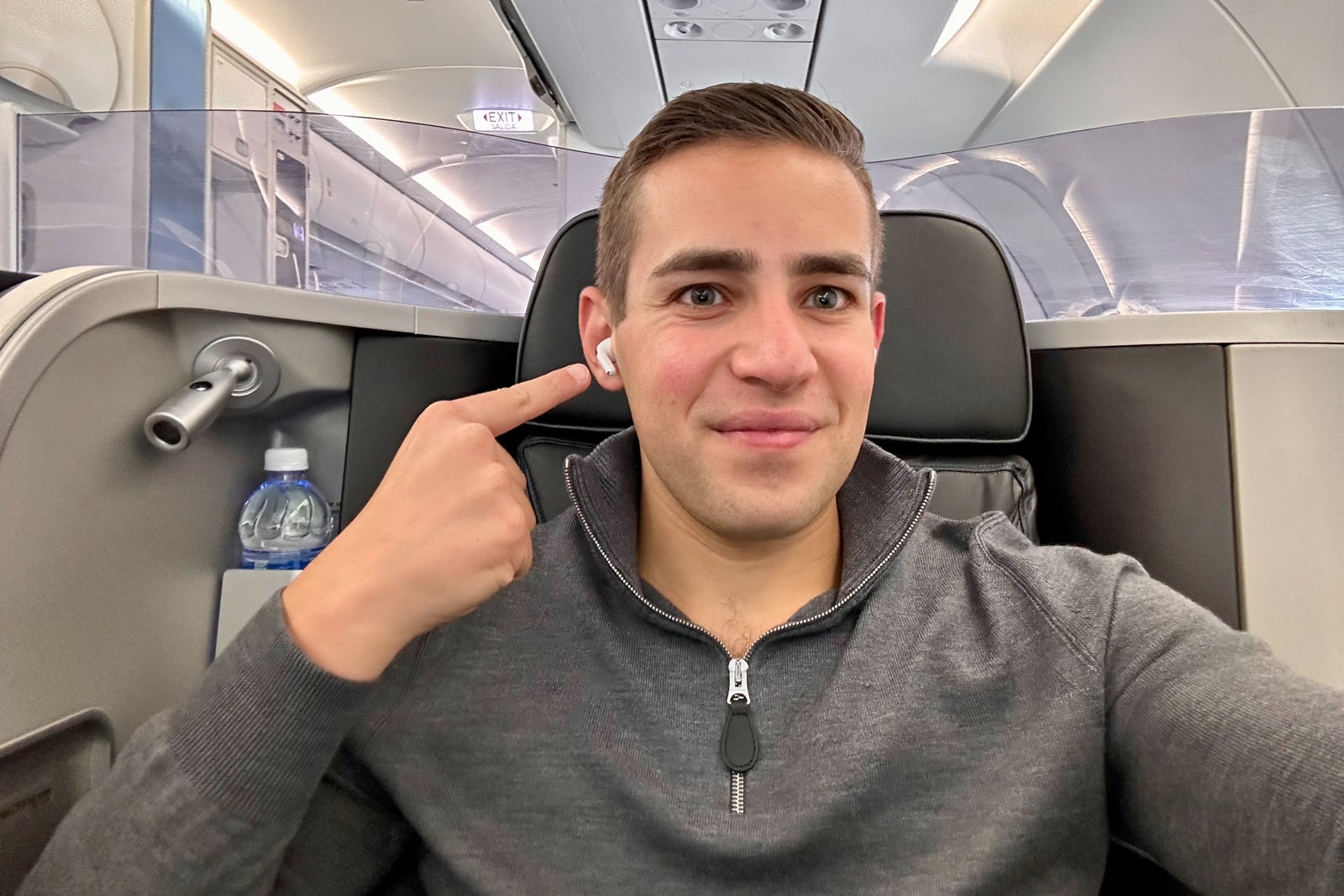 This post has been updated with new information. Pricing is accurate as of Nov. 28 and may change over time.

These earbuds are now more travel-friendly than ever, and I couldn't wait to put them to the test ever since they launched. With Amazon currently offering its lowest-ever price on the second-generation AirPods Pro as part of a Cyber Monday sale, it's definitely worth checking them out now.

Ever since the first generation AirPods Pro launched in 2019, they quickly became my go-to for long-haul flights. With impressive noise cancellation in an incredibly portable package, it was a combination that was hard to beat, especially considering how well integrated they are in the Apple ecosystem.

Of course, some travelers will always prefer to tote around over-ear headphones, including Apple’s AirPods Max, which offer superior noise cancellation but are significantly bulkier.

But for many travelers, AirPods Pro are the way to go. With the launch of the second-generation model and Amazon's latest sale, however, I wondered if they’d be worth the splurge to upgrade.

Well, after five flights and nearly 11,000 miles in the air putting them to the test, I have an answer.

Noise cancellation that’s better than ever

The first generation AirPods Pro packed an impressive sound experience in an incredibly portable package, and the new model takes that to the next level.

As a long-time user of Apple’s pro-level earbuds, I’ve grown accustomed to the sound experience they deliver, and I imagined the next-generation buds would be an iterative update in terms of the audio quality.

But when I put them on for the first time, I was especially impressed by the upgrades to the active noise cancellation.

Powered by the next-generation Apple H2 silicon chip, the new AirPods Pro can process advanced algorithms that weren’t previously possible on the first-generation model. This, combined with a new, more powerful audio driver (which physically produces the sound) unlocks nearly twice as much active noise cancellation as the previous generation.

Of course, there’s nowhere better to put Apple’s claims to the test than cruising at 30,000 feet on an airplane.

And after five flights with the new AirPods Pro, the active noise cancellation was indeed impressive. I flew with both my first- and second-generation Pros and alternated which ones I used throughout the flights to get a sense of the sound quality upgrades.

With the second-generation buds, I was disturbed by fewer announcements and chatty passengers than with the legacy model. The sound quality was noticeably better, too.

Battery boosts for the long haul

Throughout my travels, I tried to put the battery life improvements that Apple made with the second-generation AirPods Pro to the test.

Nowhere was I more impressed than during my two transcontinental flights. With the first-generation buds, I’ve always needed to recharge my AirPods roughly three-quarters of the way through a transcon flight.

But with the new AirPods Pro, the music kept playing until just after we landed. When I flew from New York to Seattle, I put on my AirPods Pro during boarding to help me focus on some last-minute work.

I then listened to a podcast and played music for the rest of the flight. When I arrived in Seattle, I still had roughly 10% of the charge left on the AirPods Pro.

With a gate-to-gate time of just over six hours, my experience with the second-generation AirPods Pro (slightly) beat Apple’s promise of up to six hours of listening time with the new Pros, which represents a one-third increase over the legacy model.

The additional 90 minutes of listening time went a long way during my transcon flights, and it also made a noticeable difference during my long-haul travels. (You’ll get an additional hour of talk time with the new Pros, too.)

While you could always charge the AirPods Pro when they die (five minutes in the case delivers roughly an hour of listening time), I appreciated being able to keep listening during my flights without needing to disrupt my music or podcasts.

The new AirPods Pro are also a great upgrade for travelers who are prone to losing things.

For one, you can always keep them connected to your bag thanks to the new lanyard loop on the charging case.

And if you misplace your second-generation AirPods Pro, the new U1 chip in the charging case enables precision finding within the Find My network, which gives you an accurate look at exactly where they are.

As you get closer, a new speaker in the case can play a sound to help you quickly locate your AirPods, regardless of whether they’re tucked into your couch or lodged between seats on an airplane.

Personally, I’m someone who keeps my AirPods in my pocket, but I’m now reassured that if they were to fall out somewhere during my travels, it wouldn’t take too long to be reunited with my headphones.

Controlling your sound experience while you’re on the go is getting easier with the second-generation AirPods Pro.

Apple redesigned the touch area on the stem of each AirPod to give users more flexibility when playing music or talking on the phone.

With the addition of a new capacitive sensing layer, you can now swipe up and down on the stem to adjust the volume. Pressing the stem controls your audio while holding the stem switches between noise cancellation and transparency modes. (You can always customize these options from the settings menu on your paired iOS device.)

Personally, the new volume slider functionality came in handy during my travels when flight attendants came by my row and when important announcements were made.

When that happened, I quickly lowered the volume directly on my AirPods without needing to use my phone or connected Apple Watch. Then, I was able to communicate with the flight crew and listen to the entire announcement without any interruption. (Alternatively, I could’ve switched to transparency mode — more on that below.)

Of course, reaching for your phone or simply pausing your audio isn’t necessarily an inconvenience, but the new volume slider is a nice-to-have feature.

Transparency Mode gets a big upgrade

Sometimes, you want to be aware of your surroundings when you’re listening to audio on your headphones. Maybe you want to hear what’s going on around you as you navigate a new city or as you’re waiting to board a flight.

In those cases, be sure to turn on transparency mode on your AirPods Pro. This feature will essentially play what’s going on around you without stopping your music.

And, the new AirPods Pro take the transparency mode experience to the next level with the introduction of Adaptive Transparency.

When you’re passing by loud construction or a fire alarm goes off, the new AirPods Pro will dynamically adjust those noises down to a much healthier decibel.

You can customize many aspects of this feature in the accessibility settings on your iOS device, but by default, adaptive transparency will kick in for any audio above 85 decibels. This should definitely help you avoid listening to harmful sounds that could eventually lead to hearing loss.

While some travelers continue to swear by over-ear headphones, the new AirPods Pro offer a compelling reason to ditch those bulky headphones during your travels.

With an even better sound experience in a package that easily fits in your pocket or purse, the second-generation AirPods Pro are especially great for travelers. They’re also better than the entry-level AirPods, which don’t offer active noise cancellation — a must-have feature for people who want to zone out when in transit.

At $249, the new Pros are $70 more than the “regular” third-generation AirPods — and that's without factoring any promotions or limited-time sales. That’s a worthwhile splurge, especially if you plan to travel with your earbuds.

The improved noise cancellation and battery boosts headline the travel-focused upgrades on the Pros, but additional improvements, such as precision finding, redesigned controls and a new adaptive transparency mode, make these Apple’s best travel-friendly earbuds yet.

It is worth noting that AirPods (and Bluetooth headphones in general) still continue to pose a problem for those trying to use their earbuds with existing seat-back monitors on airplanes. While Bluetooth support is slowly rolling out on the newest jets, you’ll still need to pack a dongle (AirFly is our recommendation) on most others.

For those upgrading from the first-generation model, the new Pros do offer a handful of worthwhile upgrades. While an immediate upgrade may be necessary, it certainly can’t hurt to put the next-generation earbuds on your holiday wishlist.

Who knows? Santa may be extra generous this year.