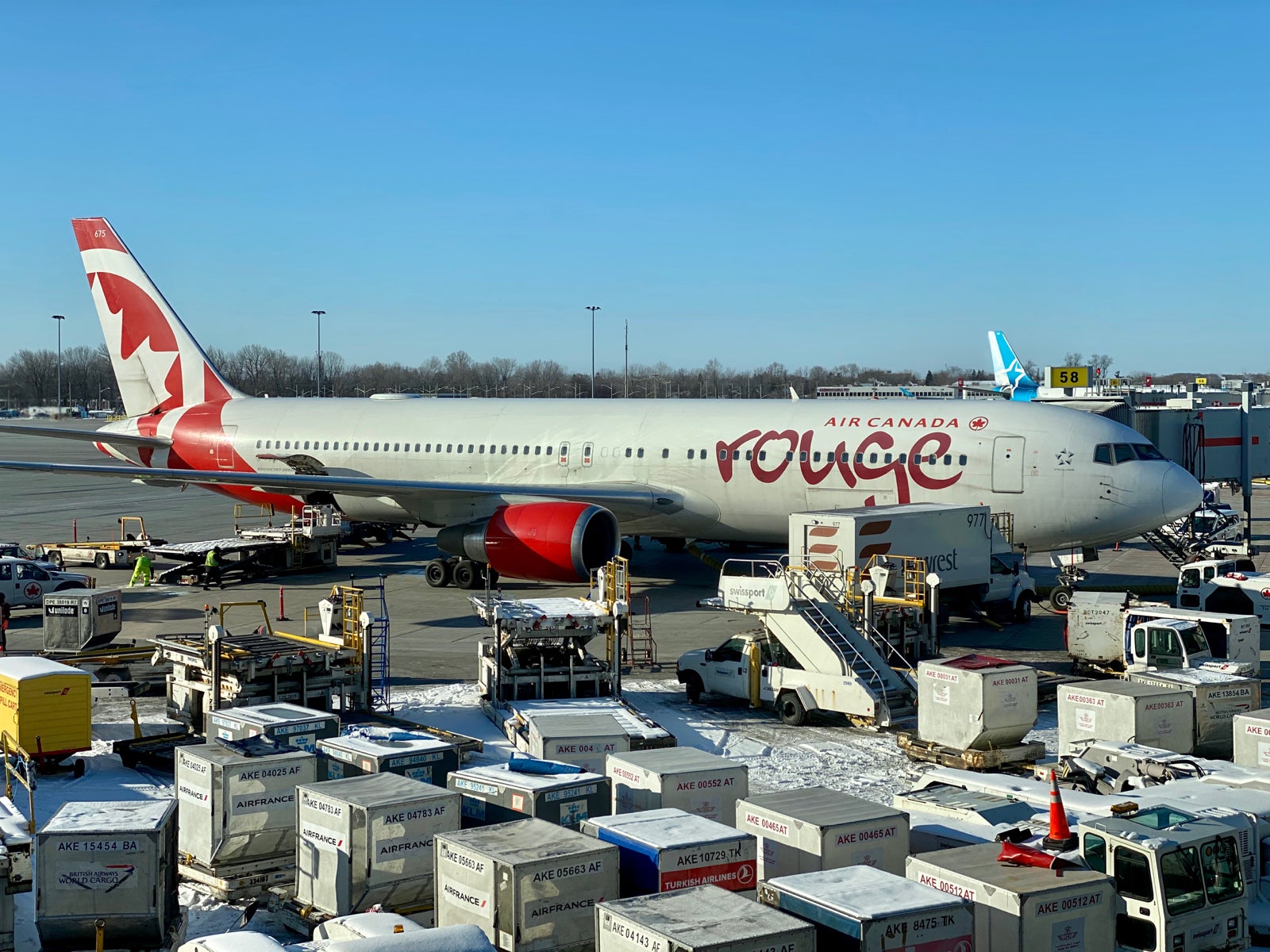 Nice service, ancient seat: Review of Air Canada Rouge Premium Class on the Boeing 767
This post contains references to products from one or more of our advertisers. We may receive compensation when you click on links to those products. Terms apply to the offers listed on this page. For an explanation of our Advertising Policy, visit this page.

As a low-cost subsidiary, Air Canada Rouge flies on both short- and long-haul leisure routes from multiple Canadian hubs. The airline operates both narrowbody Airbus jets and larger Boeing 767s. While these 767s primarily fly to Europe, you'll find them operating flights up and down the East Coast during the winter, since there's a lot more demand to fly from Canada to Florida in January than there is to Greece.

So I was thrilled to be flying a wide-body aircraft for the relatively short hop between Montreal (YUL) and Fort Lauderdale (FLL). However, after all the AvGeekery wore out, it was hard to look past the extremely dated aircraft.

Since Rouge flights operate with Air Canada flight numbers, you can book award seats on the airline with your choice of Star Alliance programs. For a flight from Canada to North America, the various costs are as follows.

In my case, I'd booked the flight as a paid ticket from Calgary to Fort Lauderdale with a connection in Montreal. On the first leg, I was flying the brand-new Air Canada A220, but unfortunately missed the connection in Montreal. Hence, I ended up spending the night near the airport, but at least I was rebooked in the same cabin on the same plane model, sans pre-assigned window seat.

My time with Air Canada Rouge began bright and early on a frigid January morning.

After getting dropped off at the trans-border departures area of the Montreal airport, I quickly checked in for my flight. Premium passengers are entitled to use the priority check-in lane, though there wasn’t much of a line at the regular area anyway.

Within minutes, my boarding pass was issued, and I was off to security and customs. The trans-border ground experience is unique in that you clear customs and immigration in Canada instead of upon arrival in the U.S., allowing you to land as a domestic flight.

Though there’s a Pre-Clearance facility in Montreal, there’s no Pre-Check security, even though my boarding pass was marked as such. However, Global Entry members, along with Priority customers and Visa Infinite cardholders, were entitled to use the fast-track security.

Once airside, it was time for customs and immigration. There were six operational Global Entry kiosks, and I was through in no time.

As a Premium Rouge customer, I was entitled to lounge access. Unfortunately, there was nothing premium about the Air Canada Maple Leaf lounge located on the upper level next to Gate 72.

As the only Star Alliance lounge serving the trans-border terminal, it was packed (and only got more crowded as the day went on).

The small lounge was arranged in one large room with a variety of seating options.

I visited during breakfast and was wholly underwhelmed by the continental assortment. They were serving various pastries, hard-boiled eggs, yogurt, oatmeal, cereals, toast and soft drinks.

There was no bar, and the beer tap was out of order.

The only two redeeming features about the lounge were the incredible tarmac views and the speedy Wi-Fi.

After a quick visit, it was time to head to the gate to board the 18-year-old Boeing 767.

As I expected for a fully-loaded wide-body departure, the gate area was crowded. Fortunately, boarding began on time, and the gate agents very much enforced the group system.

As a Group 1 passenger, I was aboard within minutes of the first call.

The plane looked quite old on the outside, and was even older on the inside. American, Delta and United all have 767s older than this one, but their cabins have been refurbished and sport a more recent look.

The Premium Rouge cabin is arranged in a 2-2-2 layout with standard recliner seats.

The seats themselves have definitely seen better days, as the padding around the seatback and headrest was really worn.

I didn’t even bother using the winged headrest because of how dirty it was.

Aside from the 5 inches of recline, there’s a footrest to keep you comfortable.

The 36-inch seat pitch and 19-inch width is a bit tight for a domestic first-class configuration.

There’s an extended armrest between seats that does a decent job of separating you from your neighbor.

The only storage you’ll find at these seats is in the seatback pocket. The 19.5-inch wide and 9-inch long tray table that folds out from the armrest barely fit my 15-inch laptop.

Sadly, there are no personal air vents on this aircraft. Furthermore, the overhead bins are tiny, which caused most passengers to have trouble storing their rollaboards.

There’s one bathroom for the 24-seat cabin. It wasn’t stocked with any additional amenities, and it felt like it came straight out of the 1990s Boeing lookbook.

The amenities and IFE offering also felt stuck in the '90s.

Each seat featured a power port, but mine was inoperable.

Even if the AC port had been working, I wouldn't have been able to charge my laptop since the power brick was too large to fit in the space.

There’s also a USB port hidden next to the flight attendant call button.

Because these‘s no seatback entertainment, the airline handed out 9.7-inch iPads preloaded with a few movies.

The Bluetooth function is locked on these tablets, so be sure to bring your wired headphones. Otherwise, you’ll need to use the cheap earbuds that they handed out.

Movies included 26 new releases, including Once Upon a Time in Hollywood and the Lion King.

If you’re looking for more entertainment, the iPads also have the Air Canada Rouge app installed. This app connects to the plane’s Wi-Fi network to stream entertainment. As such, it only worked when we were above 10,000 feet. There was plenty more content to enjoy through this app, though I instead chose my own connection to the Gogo Wi-Fi network.

The internet speeds of 3 Mbps download and upload were the only thing that felt like it belonged in the 2020s.

Though the hard product was utterly disappointing, the soft product was quite impressive.

A la Delta, there were small water bottles waiting at the seat during boarding. However, there were no pre-departure beverages served.

After the door was closed, flight attendants distributed menus(!) for the lunch service.

Orders were taken once airborne, and unfortunately they’d run out of the eight pasta dishes stocked onboard by the time they got to me. As a vegetarian, the chicken wasn’t going to cut it. Fate was on my side, though, as they’d catered one vegetarian meal accidentally.

Before the meal was served, we were offered a choice of beverages served with nuts.

I had some water, but the four wine options were quite impressive for a domestic flight. There was a full assortment of hard liquor as well.

The meal was served an hour after takeoff on a single tray with a choice of white or wheat bread. The quality of my grilled tofu and rice entree was well above average.

My seat mate had the chicken, and he really enjoyed it as well.

I could tell that this would be an all-star crew from the moment I got onboard. The two flight attendants serving the Premium cabin couldn’t have been friendlier or more engaging.

Relative to mainline Air Canada, you'll typically find younger (and lower-paid) flight attendants staffing Rouge flights. My flight was no exception, and I really appreciated the energy and excitement that the crew brought to the service.

When handing out the iPads, the crew took their time explaining the features to each individual passenger. When I mentioned that the power outlets were inoperable, the flight attendant immediately tried resetting them. When that didn’t work, he eagerly asked around the cabin for someone willing to switch seats.

Furthermore, the crew was incredibly apologetic about running out of the pasta. Before locating the mis-catered vegetarian meal, they brought me the buy-on-board menu from economy and offered me anything I wanted.

In terms of flow, the meal service was completed via carts and served on trays. This was ideal for a two-aisle cabin on a three-hour flight, as there was over half the flight left to work or watch movies.

Air Canada Rouge offers a no-frills Premium experience. The seats themselves were worn, dirty and uncomfortable. There wasn't much in the way of amenities, and the iPads felt like a band-aid to the fact that there weren't any seat-back screens.

Though the plane felt ancient, the food and beverage was delicious. Having a menu on such a short flight was a nice treat too. And most memorably, the flight attendants provided top-notch service, in line with what I'd expect from a long-haul biz crew.

So, if faced with the choice, I'd prefer to fly with Air Canada. If Rouge was the only option, I'd try to avoid the subsidiary's Boeing 767s. Their interiors are just way past their prime.