Why You Shouldn't Let Fears of Sharks, Snakes and Other Animals Stop You From Traveling

Articles
Brian Biros spent most of the last 15 years backpacking through 100+ countries. He writes TPG's Points & Miles Backpacker column, so you'll more likely find him in a hostel than a Ritz, if you can find him.
Follow
July 29, 2019
•
8 min read 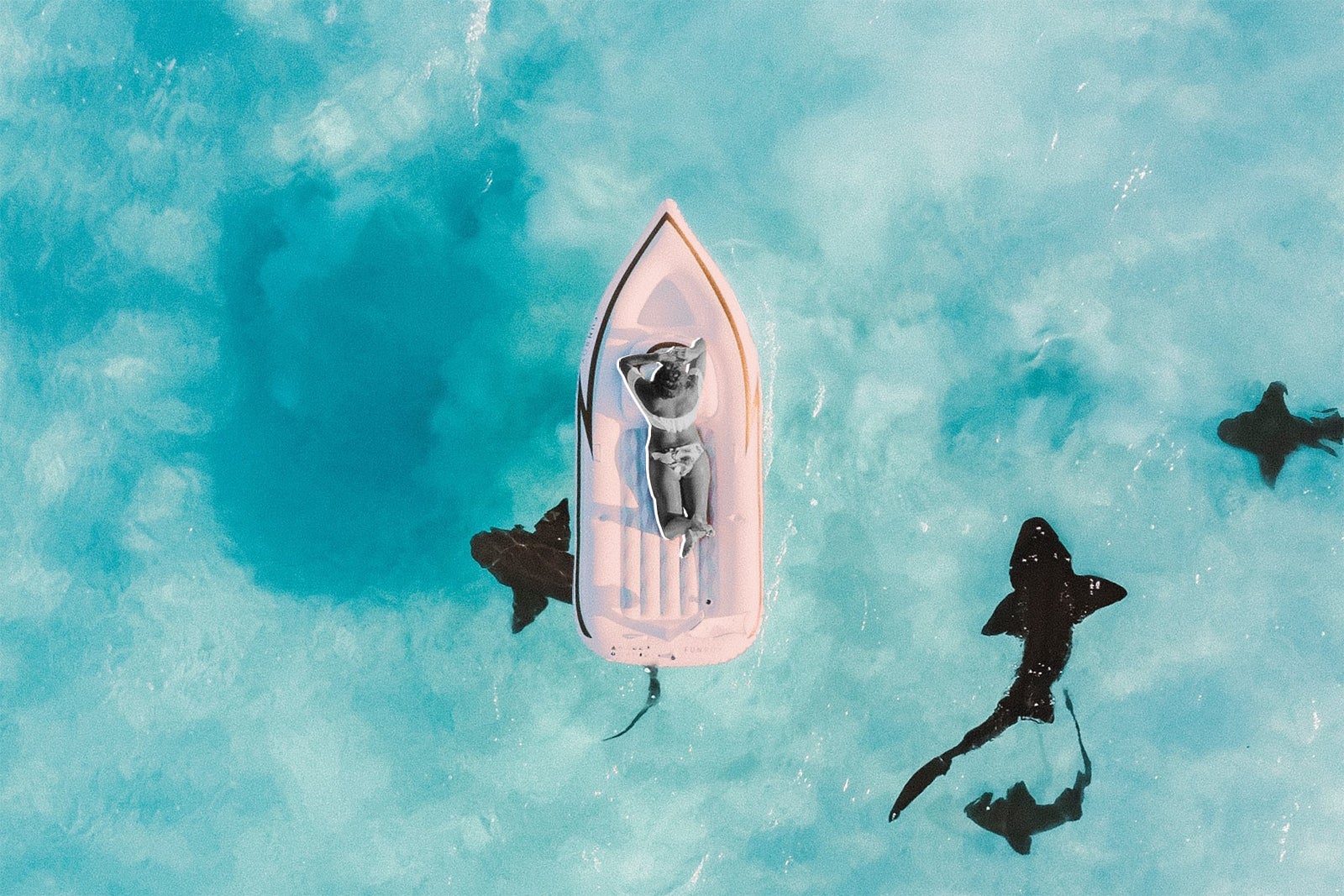 Have you always wanted to try surfing, but are worried about getting attacked by sharks? Has Australia been on your bucket list, but then you read about all those deadly snakes and spiders on Animal Planet? Does the Amazon beckon, but . . . those anacondas!

Take a deep breath and relax.

Being afraid of snakes, sharks, stingrays and other seemingly dangerous animals may be one of the worst reasons to stay home and stop traveling. You need only to look at the statistics to learn that swimming with sharks is far less dangerous than, say, sending a text while driving.

So, it's time to stop these irrational fears. To be clear, I'm not talking severe phobias, which can truly require treatment. I'm talking about putting an end to anxieties about certain destinations or activities because of extremely rare wildlife encounters — sometimes even based on works of complete fiction (cue “Jaws” music).

To help dispel common fears and help you live your best travel life, we're looking at some of the "scariest" wild animals you might see during your travels — and highlighting just how rare it is to get hurt during an encounter.

Remember, even a shark with 15 rows of teeth is less likely to hurt you than a mosquito. (Mosquitoes are responsible for an estimated 725,000 deaths annually due to mosquito-borne illnesses.)

So read on, pack your bags and get ready to put your fears to rest. Just be sure to wear mosquito repellent when you go.

Perhaps no animal has been as unfairly demonized as sharks. Last year, four humans were killed worldwide by sharks in unprovoked attacks. As an ad campaign by the AfriOceans Conservation Alliance pointed out, you're far more likely to be hurt or killed by a defective toaster.

When searching for that clip, I discovered the campaign was also run with chairs (which caused 652 deaths) and kites (which caused 358 deaths). Even though they rarely go after humans unless provoked, some sharks are more harmless than others — slow-moving nurse sharks, for example.

Of course, if you want to surf or swim in the open ocean where more aggressive shark species live, you should always take precautions: You don't want to go splashing around alone far from shore at twilight wearing lots of shiny jewelry and a metallic swimsuit while bleeding from an open wound. But definitely be extra careful when you turn on your toaster for breakfast, you daredevil you.

The number of deaths caused by snakebites is high in comparison to sharks (between 81,000 and 138,000 in 2018), but fatal attacks in regions where tourists are likely to visit is much lower. The World Health Organization (WHO) report on snakebite envenoming states that most of these deaths occur in rural regions of Africa, Asia and Latin America where medical resources are limited.

In Australia, despite having five of the 10 most venomous snakes in the world, only five people died of unprovoked snakebites in 2018. As the WHO report states, “In contrast to many other serious health conditions, a highly effective treatment exists. Most deaths and serious consequences from snake bites are entirely preventable by making safe and effective antivenoms more widely available and accessible.”

Nearly all the places you'd visit as a tourist, such as Australia or regularly trafficked areas of Asia, Africa or Latin America, have those antivenoms and adequate medical care available.

Still not convinced? Green anacondas, native to remote regions of the Amazon, are the biggest snakes of all. However, even locals rarely encounter them, and deaths caused by anacondas are extremely rare.

Statistics are tough to come by, but I couldn't find any reports of deaths caused by a spider bite in 2018. Like snakes, the emergence of widely available antivenoms has made fatalities due to spider bites exceedingly rare. In Australia in 2016, which admittedly has a bit of a reputation for its deadly critters, saw its first spider bite fatality in 37 years.

Stingrays would not have made this list if it weren't for "The Crocodile Hunter" Steve Irwin's death by stingray in 2006. Still, fatal attacks almost never occur. Irwin's death was only the second reported instance in Australia in 60 years. Last year, stingrays killed another man in Australia and in 2016, stingrays killed an aquarium worker in Singapore. But both occurrences were considered rare enough to be newsworthy.

Stingrays will only "sting" out of defense, during which they stab their perceived attacker with a barb hidden under the base of their tail. Normally, humans are only stung on or near their feet after accidentally stepping on a stingray. For an attack to be fatal, the barb would have to pierce them near their heart, which happened in the three unlikely cases above.

Of the 162 reported human deaths caused by these reptiles in 2018, only two were caused by the American alligator. There were none in 2017 and three in 2016, including the two-year-old attacked at Disney World.

Given its location in central Florida, alligators in Disney World are unavoidable. In fact, on a trip there in 2008, my nephew spotted one swimming up to Tom Sawyer Island from the Liberty Square Riverboat in Magic Kingdom. I snapped this picture quickly, and reported it to a worker after the cruise. He didn't seem to believe me, and said it was probably animatronic.

However, after the 2016 attack, Disney increased training regarding wildlife and removed twice as many alligators as they did the previous year. Disney World is safer now than it was before that fatality, where there hadn't been an attack since 1986. I'm sure if I reported that alligator sighting now, it would be handled much differently.

Like with sharks, the best way to avoid an alligator attack is to avoid swimming alone at night.

So don't let the risk of an alligator attack keep you from visiting Disney World. Five hour waits for rides, though — that might be enough to keep you home.