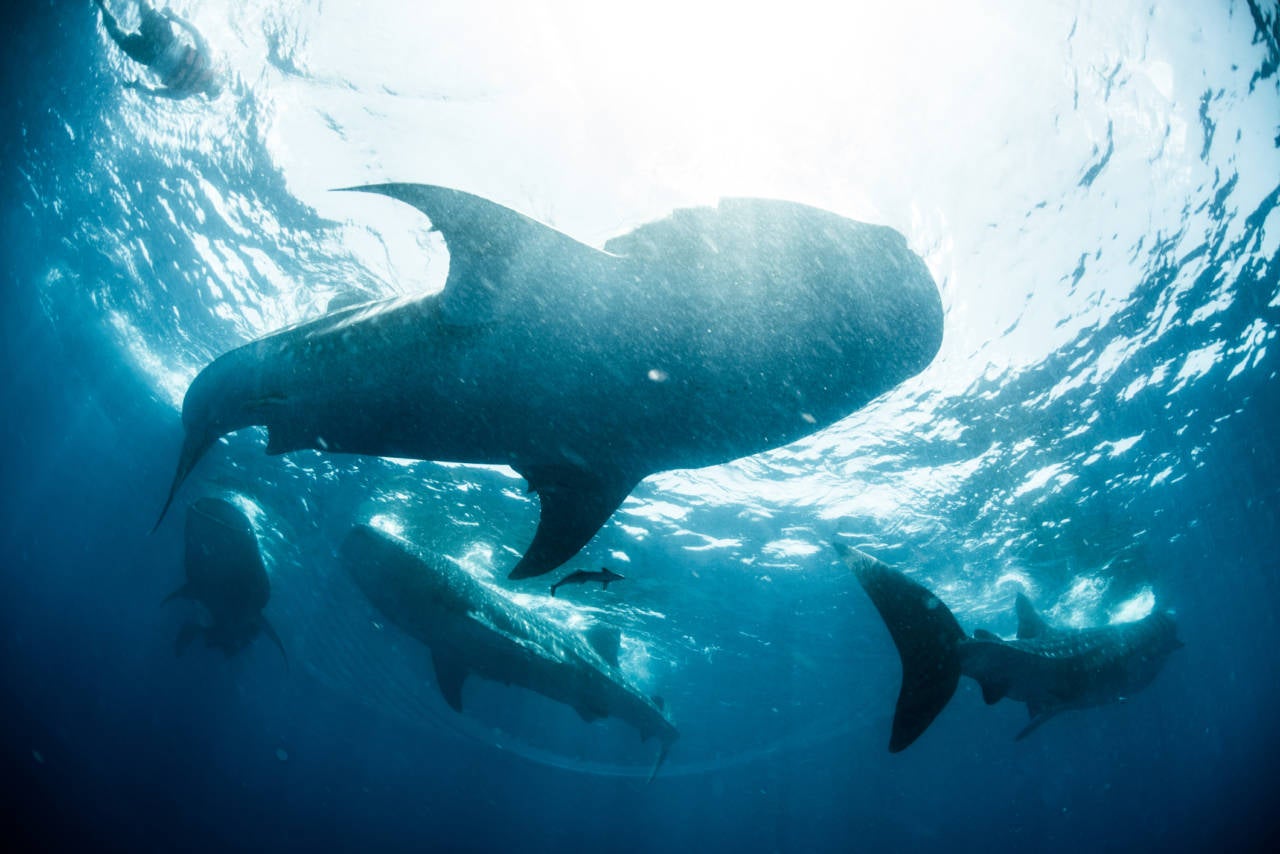 How to Book a Trip to Swim With 20-Ton Whale Sharks
This post contains references to products from one or more of our advertisers. We may receive compensation when you click on links to those products. Terms apply to the offers listed on this page. For an explanation of our Advertising Policy, visit this page.

It’s a good thing no one can hear you scream underwater, because the first time you come face to face with a whale shark, that might be your initial reaction.

Whale sharks are the largest fish in the sea, measuring up to 40 feet in length and weighing more than 20 tons: roughly the basic operating weight of three Learjet 75's. Their huge, gaping mouths look capable of swallowing humans whole, but they’re actually quite gentle. In fact, whale sharks spend their days swimming around slowly, filtering plankton. They’re found in tropical waters all over the world including Mexico, where they migrate each year to feed and mate.

These are magnificent beasts, and swimming with them is an increasingly popular visitor activity. On a guided half- or full-day boat expedition, you can have a short but close encounter with los tiburones ballena as they approach the surface to feed. As with any wildlife interaction, much of it comes down to sheer luck, including how many whale sharks you see and how long you can spend with them. It may last only a matter of minutes, but it will be enough to leave a lasting impression.

As the whale shark glides past you’ll kick hard to keep up. And for a few moments, you may even swim alongside the creature, wondering at its size and strangeness, its spotted coloration and graceful movements.

In Baja California Sur, November to February is peak season for tourists and whale sharks alike, but the latter can be found in the Sea of Cortez anytime from October through April. The Bay of La Paz is a reliable spot to see the jumbo swimmers relatively close to land.

Base yourself at the Posada de las Flores La Paz right on the malecon, (or promenade), or if you don’t mind being further from the center, the ritzy CostaBaja Resort and the Hyatt Place La Paz are both 15 minutes north of town. The latter can be booked from 5,000 World of Hyatt points per night.

Over the summer, whale sharks can be found in the waters of the Yucatan Peninsula, especially off the northern tip of Quintana Roo. Staying on the low-key Isla Holbox (pronounced oll-bosh) gets you as close as possible to the sharks, but you can still expect a 1.5 to 2-hour boat ride to reach them. Whale shark season typically runs from June to mid-September.

There are no major chain hotels on the intimate, relaxed island, so book a room at the boutique CasaSandra or the super stylish Casa Las Tortugas, and put the reservation on your Chase Sapphire Reserve card to earn 3x points.
To get there, you’ll fly into Cancun International Airport (CUN); around 20 airlines travel there from the US including American, United, Delta, JetBlue, Air Canada and AeroMexico. Once you’ve touched down, you’ll need ground transportation to the town of Chiquila, which is 2 to 3 hours away; from there you can board the 25 minute ferry to Holbox, which departs every half hour.

Be sure to book a reputable tour company with good reviews that is authorized by SEMARNAT, the country’s environmental agency. And be sure to find out exactly what’s included in the price before making a deposit. Usually a guide, transportation, lunch, beverages, snorkeling equipment and a second snorkeling stop at a reef are part of the package.

On the East Coast, for example, Holbox Whale Shark Tours include snorkeling, fresh ceviche, a waterproof camera and light breakfast are included in the shared tour price. And CaboTrek, a tour operator in partnership with the Whale Shark Research Project, includes snacks, snorkel equipment, soft drinks and lunch — and their tours can be picked up from either Cabo San Lucas or La Paz.

Just be wary of cut-rate deals: although whale shark tourism in Mexico is regulated, there are plenty of unlicensed operators who don’t adhere to the conservation and safety guidelines. These underwater mammoths are an endangered species, so it’s extremely important that, as tourists, we are conscientious about limiting our impact on them.

Though your guide will be able to provide expert direction, it's important to also familiarize yourself with the rules before your excursion. According to the World Wildlife Foundation, for example, it's crucial that tourists refrain from using sunscreens or other oils during their swim; and swimmers should maintain a distance of at least 16 feet at all times, to ensure the comfort and safety of the whale shark. And touching the sharks is completely forbidden.

Once you’ve booked your tour, you’re set to have the underwater experience of a lifetime. The chance to swim with the largest fish in the sea is yet one more reason to book a Mexico beach vacation — just in case tacos, tequila and palm trees weren’t motivation enough.