Articles
Ben Smithson is a senior writer for TPG UK. Originally from Australia, he is the primary points and miles writer for the U.K. site.
Follow
July 12, 2022
•
8 min read 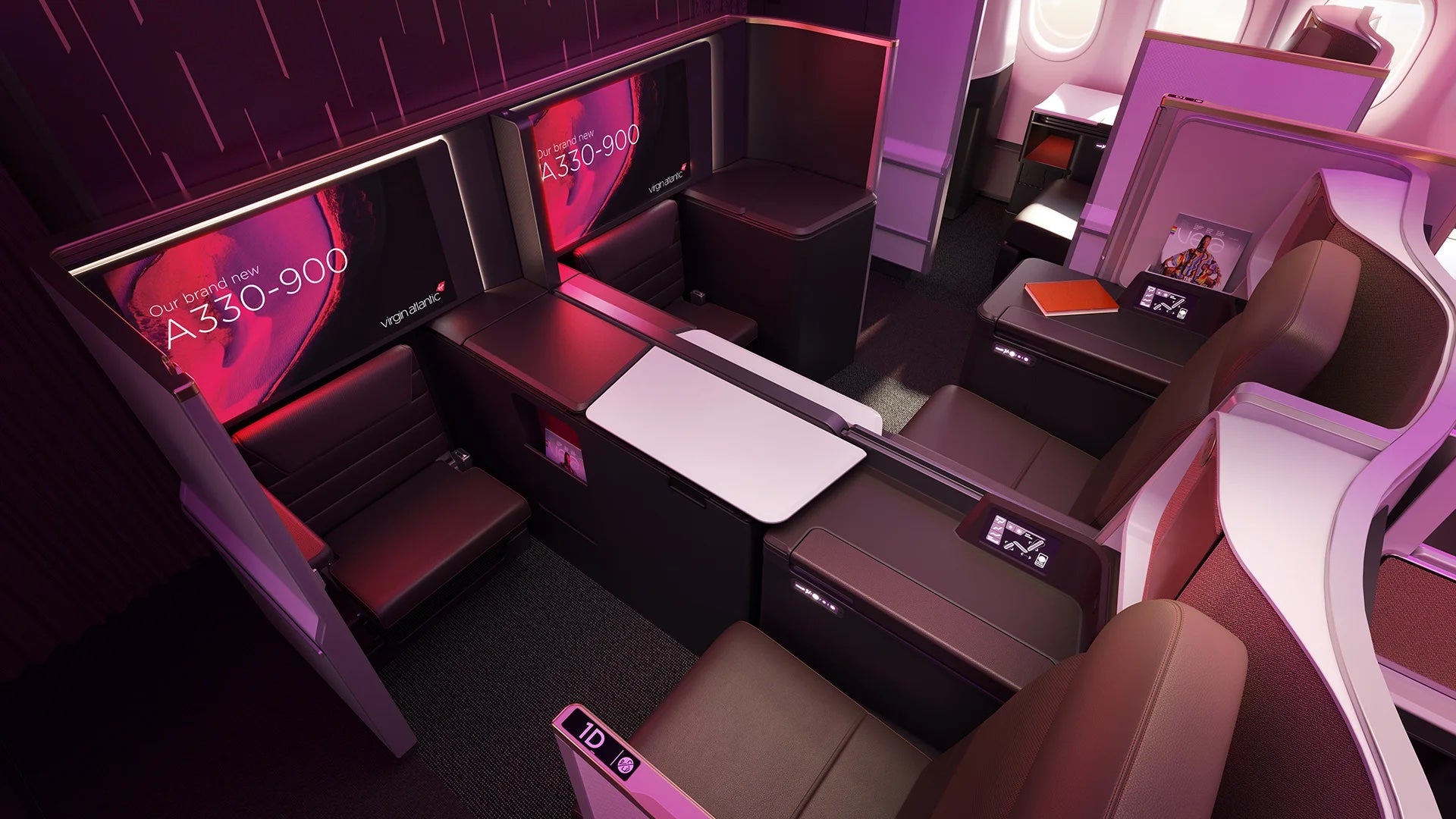 Virgin Atlantic has a new aircraft type with an all-new business class cabin and two very special 'business class plus' suites. The carrier unveiled the new design at a special launch event in London on July 12.

The airline is set to receive up to 16 new Airbus A330-900 neo aircraft, with the first three arriving in September 2022. They are the first U.K. airline to fly this aircraft type.

The aircraft will eventually replace their existing A330 fleet — some of which are now more than 10 years old. At list prices, the fleet order would be valued at more than $4.05 billion, though airlines typically negotiate steep discounts on bulk orders.

The new planes are designed to be 11% more fuel- and carbon-efficient than the A330-300s they are replacing; they are also much quieter, featuring a 50% reduction in airport noise contour. Over the course of a 10-year period, the average age of Virgin’s fleet will reduce to just seven years — much younger than that of its rival British Airways.

While the airline already operates the new Airbus A350-1000 with modern cabins in economy, premium economy and business class, the latest A330 aircraft will feature brand new seats in all three classes. This is a considerable step up from the outdated and unpopular coffin-style seats of the Boeing 787 Dreamliner and the older Airbus A3330 that are still plying some routes.

Related: Crowd pleaser: A review of Virgin Atlantic’s A350 in economy from London to New York

Developed by the Virgin Atlantic in-house design team — in collaboration with Factorydesign — there are some familiar features as well as exciting new concepts awaiting Upper Class guests.

At the front of the aircraft, you’ll find two very special seats known as The Retreat Suite. Considered a ‘super business class’ (or ‘mini first class,’ depending on how you look at it), these two seats are the largest and most luxurious seats Virgin Atlantic has ever offered. They will come with a spacious 6-foot, 7-inch fully flat bed and a 27-inch touchscreen.

Guests lucky enough to be seated in these two suites can even invite a companion to dine with them thanks to a spacious ottoman. Virgin Atlantic told TPG these special suites will be offered for an additional $238 surcharge to Upper Class guests 14 days before departure. They may be available to book with Virgin Points, or, if they remain unsold at check-in, they may be offered to elite status Flying Club members on a surprise and delight basis.

With four guests seated in the two Retreat Suites, the design is not dissimilar to Qatar Airways’ award-winning Qsuites business class center pods.

Related: My thoughts on flying Qatar Qsuite as a group of 4

Thirty new Upper Class suites — arranged in a staggered 1-2-1 configuration — surround the two special Retreat Suites in the front cabin. Each seat will face forward, convert to a fully flat bed and have direct aisle access — a huge improvement over the existing A330 Upper Class seats.

Related: Lofty heights: A review of Virgin Atlantic’s Upper Class Suite on the A350 from London to New York

Suite passengers can also enjoy a social space called ‘The Loft’ which is an evolution of the social space that is onboard most of the airline’s Airbus A350 aircraft. The area has space for eight people, and it will feature new self-service fridges and beverage dispensers to help passengers socialize and celebrate.

The seats in the A330 Loft are higher than those on the A350 and there's a reason for that: Virgin explained to TPG that passengers seated in The Loft love interacting with both the crew and other passengers mingling about the cabin. Having higher seats allows them to be closer to the eye level of those standing around them.

The new aircraft features a large premium economy cabin with 46 seats in a 2-3-2 configuration. Seats feature an industry-standard 38-inch of pitch, as well as 13.3-inch touchscreen televisions and in-seat wireless charging for all Premium passengers. The seats did feel a little narrow when we tried them out at the launch event this evening.

The economy cabin features 28 extra legroom Economy Delight seats, which have 34-inches of pitch, and 156 Economy Classic seats, which have the standard 31-inch pitch. The A330 is one of the most popular wide-body aircraft for passengers traveling in pairs thanks to its 2-4-2 layout; this configuration allows couples to snag window seats with no other passengers next to them. This cannot be achieved on the wider A350, A380, or Boeing 777 and 787 families in economy, as airlines opt for three seats between each window and aisle.

Economy passengers will enjoy 13.3-inch IFE screens — the same size as those in the Premium cabin.

"We’re proud to unveil our state-of-the-art A330neo and show the evolution of our customer experience, with each of our customers receiving a premium experience regardless of the cabin they travel in," Corneel Koster, the company’s chief customer and operating officer, said of the vision behind the new aircraft. "They’ll be better connected with their fellow travelers and our amazing crew in the air, and with their friends and family on the ground."

"The A330neo plays a significant role in our multi-billion dollar fleet transformation, demonstrating our commitment to the planet," he added. "We know the most impactful thing we can do as an airline is to fly the cleanest, greenest, youngest fleet possible and the A330neo is integral to achieving this goal. It’s truly a plane for the future.”

The Airbus A330neo will commence passenger services between Heathrow Airport (LHR) and Boston Logan International Airport (BOS) in early October, with seats on sale later this month. Other routes are yet to be finalized, though they will include service to the U.S. — Virgin's most popular market. The new aircraft will be based at Heathrow. However, Koster also revealed to TPG that Virgin Atlantic may return to London Gatwick Airport (LGW) next year, depending on demand, and he noted there are operational efficiencies from a single hub in London. Virgin is enjoying great success at Manchester Airport (MAN), and the carrier plans to open a dedicated Clubhouse there next year.

Related: Pelotons and planespotting: Inside the reopening of Virgin Atlantic’s Heathrow Terminal 3 and refreshed Clubhouse

When asked about Heathrow's request to stop selling tickets until Sept. 11 to cope with the overwhelming demand amid airport staffing issues, Koster said Virgin is well placed to operate all of its scheduled services this summer; it's currently operating 99% of scheduled services.

He also explained recruitment was progressing well and, although call center wait times are "way higher" than they should be, they should soon be at pre-pandemic levels. He acknowledged many passengers have more questions than usual because of the uncertain travel climate right now, so staff spends more time on each call. Plus, these wait times can increase when there are factors outside their control, such as industrial strikes.