A Mountain of Trash Threatens the Future of Everest Tourism 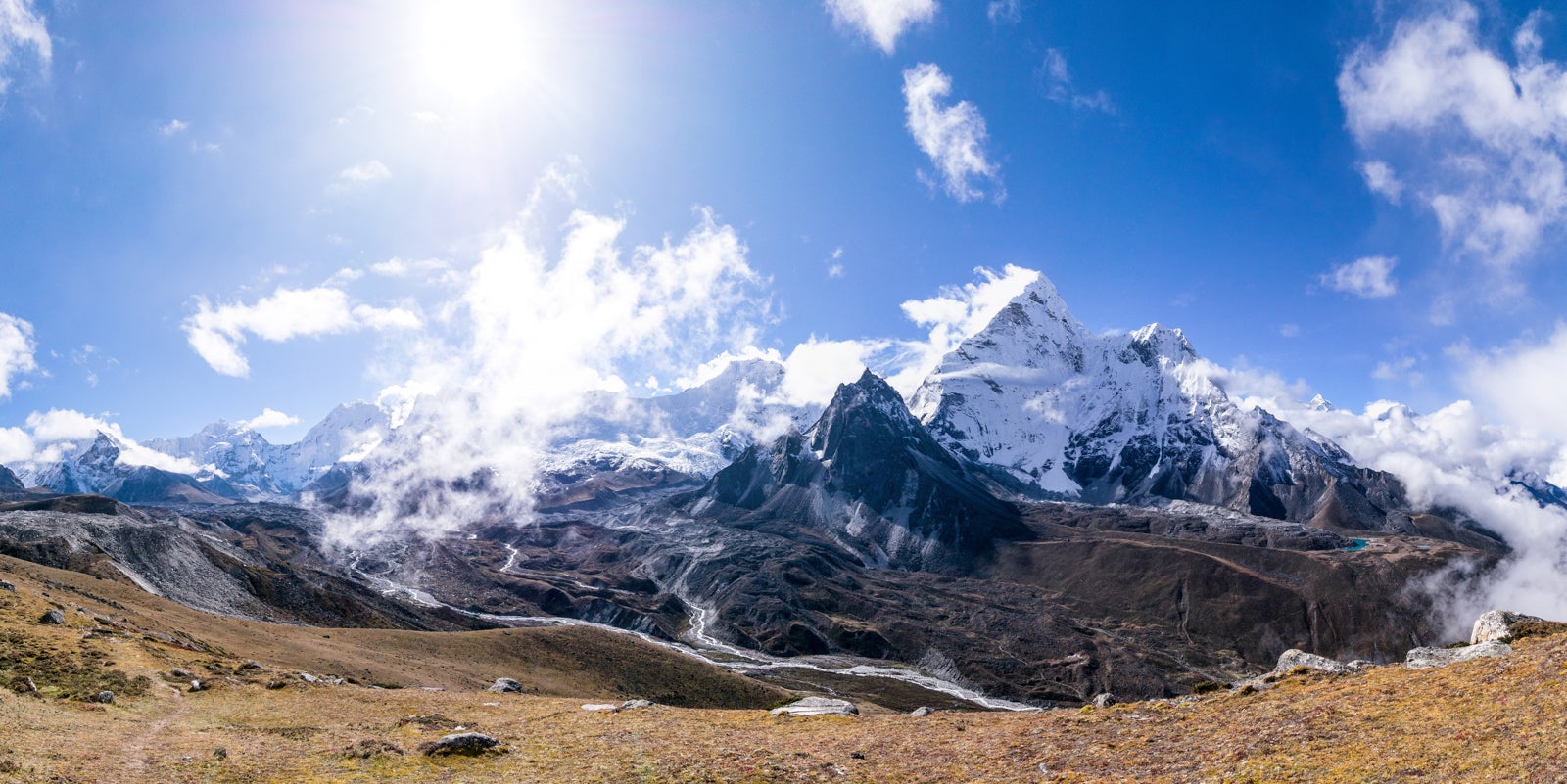 A Mountain of Trash Threatens the Future of Everest Tourism
This post contains references to products from one or more of our advertisers. We may receive compensation when you click on links to those products. Terms apply to the offers listed on this page. For an explanation of our Advertising Policy, visit this page.

As visits to Mount Everest and its two base camps reach upwards of a million each year, business is booming. But the garbage-strewn slopes are making many question the sustainability of tourism on the world's most famous peak.

When Everest was summited for the first time by Edmund Hillary and Tenzing Norgay in 1953, there were only a few elite mountaineers qualified to even attempt such a feat. And in the years following the first ascent, the massive walls and perilous glaciers remained largely untouched, waiting for those who would first grind their teeth on smaller mountains before making the trip to Everest.

Upon reaching the iconic Himalayan mountain, they would be required to forge their own way up the mountain while sharing base camp with a few other parties. They'd set their own ropes and spend weeks sleeping in tents during the trek to and from the camp.

But in 1980, Dick Bass — a wealthy Texas oilman with limited mountaineering experience — and Frank Wells (the former president of Walt Disney Company) came up with the idea to climb the highest mountain on each of the seven continents. In lieu of experience, the two paid the world’s best mountaineers to guide them up each mountain, assisting with camp and meal preparation, overseeing rope management and other basic tasks. After Bass completed his final summit, Everest, on April 30, 1985, the two published "Seven Summits," in which they recounted their experiences. The idea of climbing the world’s highest mountains caught on with not just seasoned mountaineers but also outdoor enthusiasts, and “adventure mountaineering” was born.

Bass proved that, with the right amount of money, anyone can climb Everest and other high-altitude mountains. Today, around 1,000 people attempt to summit Everest each year — some of whom have never been tied to a rope or used crampons in their lives. As a result, Everest Base Camp (specifically, the more popular camp on the Nepalese side of the mountain) has, in a sense, become the world’s highest city.

But those seeking to summit the world’s tallest peak aren’t the only ones inundating the mountain. In addition to the 1,200 people who purchase permits for an Everest attempt each year, thousands more visit Everest’s two base camps — located on the Chinese and Nepalese sides of the mountain. According to the Chinese Mountaineering Association, 40,000 people visited its Tibetan Base Camp in 2015 and even more visited the Nepalese Base Camp the following year.

And with the increasing popularity of outdoor adventure, it's expected that these numbers will continue to rise.

“Each year, there are more and more tourists,” Urgen Sherpa, the owner of Sherpa High Ambitions Trekking and Expedition, told The Points Guy in an email. “They are building more quality lodges and facilities with phone and internet services.”

Modern amenities make the trek to Everest’s Nepal Base Camp more accessible and, as a result, more tourists are encouraged to visit. Trekkers are no longer required to sleep in tents as they walk toward Base Camp — they simply spend each night in local lodges, or “teahouses,” enjoying bottles of wine and prepared meals. On the Tibetan side, a visit to Base Camp requires not much more than a car ride arranged by an organized tour service or travel agency.

“When I first hiked [to Everest Base Camp] in the 80’s, we would hike a mile or two and see a tea house — maybe two or three tea houses in the villages,” said Rick Wilcox during a phone call. Wilcox summited Everest in 1991, has been making the trek to base camp for 30 years and owns International Mountain Equipment in New Hampshire. “But now you’re never out of sight of a teahouse," he said. "They are constantly building new facilities to accommodate more people. And I don’t know where the end of that is.”

While the increased number of visitors each year greatly benefits the local economy, the traffic and associated waste puts a strain on the natural resources. Earlier this year, China took action by closing the base camp on the Tibetan side to tourists without climbing permits.

The closure will serve as a clean-up period during which garbage and human waste will be removed. According to the BBC, an official announcement made by Tibetan authorities in December claimed that last year, three clean-up operations removed eight tons of waste. In addition to waste at the base camp, this year’s operations will also attempt to remove the bodies of mountaineers who have perished in the death zone, some 26,000 feet above sea level.

The problem of garbage and human waste is not a new one in the climbing community. Climbers making their way up North America’s largest wall — El Capitan in Yosemite National Park — defecate in “WAG-bags,” which get packed out along with all of their garbage. But when you have a much larger number of people visiting a single camp (many of whom have not been taught the same “leave-no-trace” practices) the problem is greatly exacerbated.

According to Wilcox, “the solution to pollution is dilution.”

Wilcox told TPG that, "90% of the people that visit Nepal go to the Annapurna or the Everest regions."

“But I’ve taken groups into other regions, and they’re wonderful. There’s hardly anyone there. You kind of turn back the clock. There’s no electricity, no internet, no French wine — you just go up a valley and camp out.”

But for many travelers, visiting these lesser known (yet no less impressive) regions doesn’t quite have the same appeal as being able to tick “Everest Base Camp” off a bucket list.

So, in another measure designed to combat this continuous flow of tourists and the resulting mountain of garbage, China is requiring climbers to carry out all of their waste — including feces. In fact, each climber must carry out at least 18 pounds of garbage and human waste, or pay a $1,500 fee. And on the Nepalese side, a massive $4,000 fee is required.

While there is a system in place to manage the human waste at base camp, the higher altitude terrain has added another layer of complexity. The freezing cold keeps the waste from biodegrading, causing it to leach into the ice and snow climbers melt for cooking. Eventually, the moving Khumbu glacier delivers this feces straight to the doorstep of those at the base camp.

Unfortunately, there is no easy solution to the compounding waste problem at Everest. A lack of regulation and enforcement on the upper reaches of the mountain put virtually all the responsibility into the hands of individual climbers and expedition leaders. And at an elevation where simply breathing is a chore, you can imagine that hauling garbage and human waste is not always a top priority.

Many climbers and industry professionals have doubts as to whether the current trajectory of tourism on Everest is sustainable.

“If you look at the growth between our 1991 trip when there were 30 people [at the base camp] to now — it’s increased by 1,000,” Wilcox said. “Ten years from now is it gonna be 2,000? How can one route sustain that number of people? It’s like ants from the bottom to top of the mountain.”

But Wilcox does have some sense of hope for the mountain’s future. “I have seen some progress. The teahouses have toilets now, whereas before you’d just go behind a rock. So it’s getting there, but like everything, it’s not perfect.”

Featured image by A view of Everest from the Kongma La Pass. (Photo by Toomas Tartes / Unsplash)