Articles
Jordan Allen has produced content for TPG on everything from travel trends to flight deals.
Follow
Nov. 01, 2018
•
10 min read 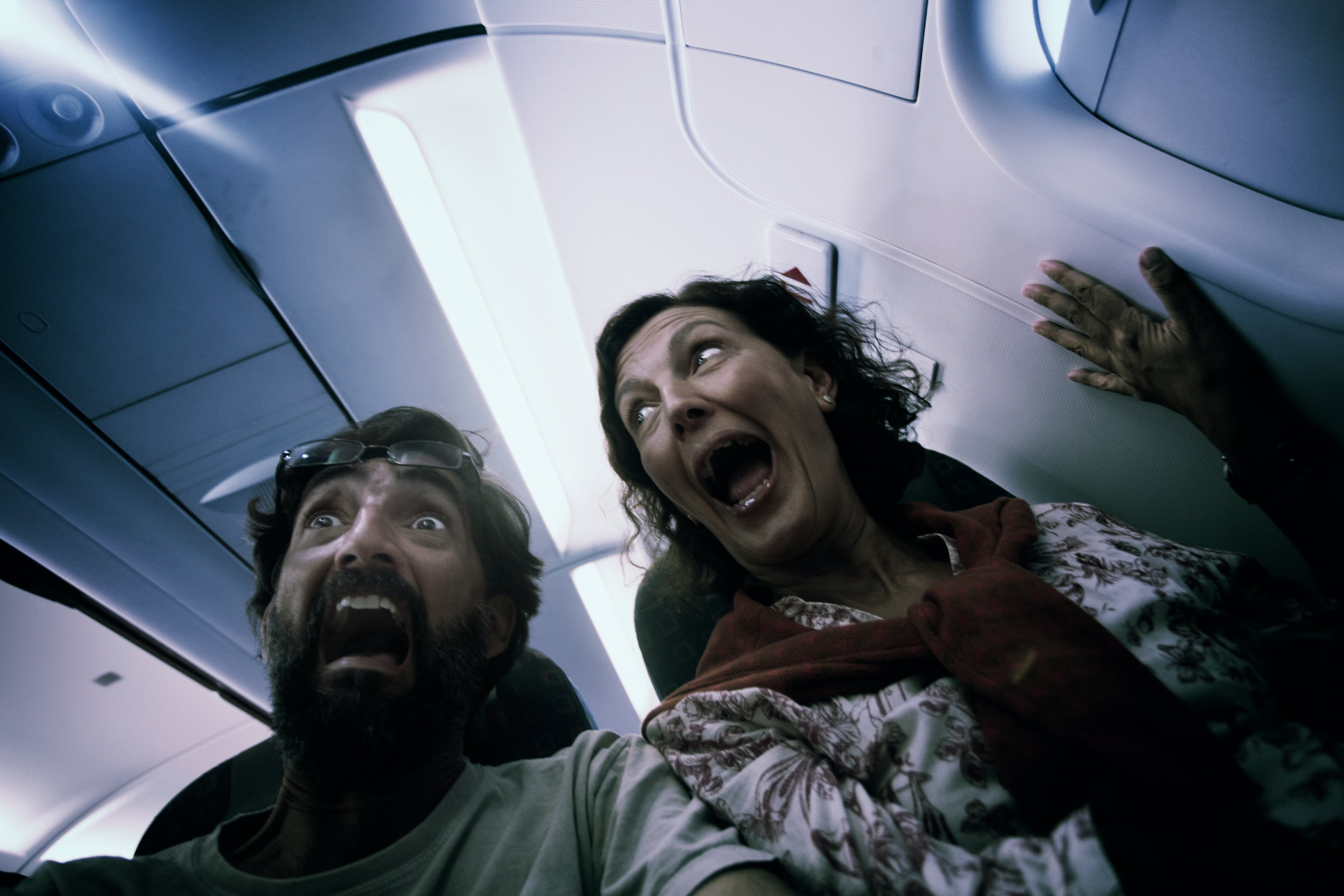 Spooky specters, blood-sucking vampires, decaying zombies — sure, these classic ghouls are pretty scary. But for serious travelers, there are few things more terrifying than a trip gone awry.

In lieu of ghost stories this All Hallows' Eve, a few TPG staffers are holding the figurative flashlight and sharing their most frightful travel horror stories. From the gruesome (airplane puke) to the genuinely harrowing, these six spine-chilling sagas are sure to have you checking and double-checking your next flight itinerary, purchasing trip insurance and stocking up on Wet Wipes.

Tale of the Phantom Ticket

“In 2010, my wife and I arrived at Lihue Airport (LIH) on the island of Kauai, in Hawaii. We arrived about three hours early, and I recall the boarding passes we received at the check-in desk looking a little odd. I’d never seen 'Flight Coupon Required' on a pass, but the agent didn’t seem nonplussed, so I let it go. They got us through security, where we sat patiently at our boarding gate flipping through photos from a terrific anniversary vacation. Fast forward to boarding, and our passes wouldn’t scan properly. 'This isn’t a ticket,' we were told."

"We booked our flights through Expedia, and when a schedule change happened, I phoned Expedia to request a different route. Best I can tell, Expedia never actually saw that the tickets were reissued, leaving us with a ghost itinerary where a route was published but we didn’t actually have confirmed tickets. The check-in desk could’ve alerted us to this three hours prior to our flight, which would’ve been plenty of time to sort things out, but alas. We tried in vain at the gate to remedy the issue, but everyone boarded up and our redeye back to the mainland departed as we stared from inside the terminal, stunned."

"The worst part of the ordeal was the complete disregard for our dilemma by the ground and phone staff. We were laughed out of the airport and had to fight hard just to get booked on a flight the following day, despite having ironclad proof that we weren’t in the wrong. To boot, we had to pay last-minute rates for an overnight hotel stay (this was long before I knew about credit cards with trip disruption protection), and for a taxi there and back."

"It soured an otherwise amazing trip to one of the most beautiful places on Earth, but it taught me a valuable lesson: always check to make sure things are settled in the event of IROPS. And to never fly US Airways, regardless of how cheap the fare was.” —Darren Murph, Senior Writer

“The year is 1977 or 1978. I'm seven or so years old, and beyond excited to go on my first flight: from Milan to Rome, to go see family. I'm also flying as an unaccompanied minor, in the care of the Alitalia flight crew. Which I was also very excited about, as a budding aviation geek. So my mom drives me to the airport, checks me in, a flight attendant takes me by the hand and sits me down at my very own window seat on my very first Douglas DC-9 — my favorite airplane!"

"And then we wait on the tarmac. And wait. And wait. People are getting antsy — this is before cellphones, of course. Finally, after a long time, we are told to disembark because someone called in a bomb threat to our flight. Terrorism was a big deal in Italy in the 1970s; left- and right-wing extremists killed a lot of people, and bombings did happen, with alarming frequency. (This might be more of a horror story if I had actually been scared, but in fact, I recall thinking 'Ohhh, more time on the plane! Yes!' — a sentiment probably not shared by my fellow passengers.) And yes: We eventually did get to Rome, in one piece.” — Alberto Riva, Managing Editor

Invasion of the Bag Snatcher

“In April, my boyfriend and I decided to drive Spain's Costa Brava. We had found an amazing flight deal into Barcelona with Norwegian, and I was celebrating my birthday and a new job. The trip started on a high. After a couple days in the city, we rented a car and began driving north, with plans to split our nights between car camping and camping outside."

"One evening, barely halfway through the trip, we stopped for dinner in Sant Feliu de Guíxols. After a quick meal, we returned to find that our car — which had been parked in a busy, well-lit lot — had a brick thrown through the window. Our packs were stolen, along with our tent, sleeping bags and clothes. (Fortunately, we had our passports, wallets and phones on us, so we avoided that specific travel nightmare.)"

"When we received an alert from Norwegian that our flight was overbooked and they were searching for volunteers to change flights, we decided to cut our losses and head home early. When the €200 per person we'd been offered by way of compensation didn't arrive in the weeks that followed, I emailed the airline but, because I never received a claim number, there was nothing to trace. I was told to resubmit, which I did. Repeatedly."

"It wasn't until late June that I found a way to get ahold of a human on the phone who could give me a claim number and process the payment. Now, it's been more than half a year, and we're still fighting with the car rental company and insurance company to cover the broken window. More like a horror show than a dream trip!” — Melanie Lieberman, Travel Editor

"When my youngest was one, we flew from Houston to Washington, DC for a weekend work event. We had hit the stage in the flight when she started getting bored, but we were approaching landing. Snapchat filters were all the rage at the time, so I pulled that up on my phone to buy us a few more minutes of entertainment."

"As she was admiring herself in the phone with bunny or cat ears, I saw something strange coming at us through the filter. Only, it wasn’t the filter."

"It was the baby getting unexpectedly and violently sick on the phone, on me, on the seat, on everything. We were both 100% covered in puke. I had nothing to battle this puke with but airplane napkins and some wipes, neither of which were remotely a match for the situation. I think I had a change of clothes for her, but me? I got to stay puke-covered through landing and the trip to the hotel. This was not a minor spit-up or a little vomit, this was the ultimate Puke-pocalypse catastrophe. You have not done the parenting walk of shame until you shimmy through the airport stinky, sticky and covered in puke." — Summer Hull, Family Travel Editor

“Two years ago, when I was a student, I spent a semester abroad in Cork, Ireland. Everything about it was absolutely amazing, however, traveling from Cork to other countries around Europe proved to be quite the hassle. More often than not, I would have to take a 3 to 4 hour bus ride from Cork to Dublin to get to the airport, because tickets were way cheaper out of Dublin Airport (DUB) than Cork Airport (ORK). Luckily, the buses ran pretty frequently. Every hour, a bus would depart Cork for Dublin and vice versa. They ran from 6am to 1am."

"Coming back from Barcelona on about 2 hours of sleep, my flight was delayed two hours. I didn’t realize it at the time — but that meant I wouldn’t get into Dublin until after the last bus had left."

"I know spending a night in an airport sounds like more of an inconvenience than an actual horror story. However, that night they tested all of the lights and alarms in the airport. I remember wandering through the dark airport lobby sometime around 3am, phone as a flashlight, catching small glimpses of fellow unfortunate travelers passed out on couches, chairs and the floor — all to the sound of a turbulent alarm. It was sort of like that scene in REC where they find a demon running around in the dark. Sort of."

"When I finally found a space to sit down and shut my eyes, a security agent shook my shoulder and woke me up. 'You have to go outside with everyone else,' he said. That’s when I noticed the group of people standing outside in the rain. They weren’t just testing alarms — they were running drills. When the bus finally arrived at 6 am, I couldn’t get out of there fast enough.” — Jordan Allen, Intern

“When I decided to hike Machu Picchu, I wanted to test a variety of ways to travel to the magical set of ruins. My husband and I booked the train for the way back to Cusco, but thought it would be an adventure to take a van ride through the mountains to a point three hours away from Aguas Calientes, where we would hike for three hours along the railroad tracks past waterfalls, mountains and forests to get to the gateway town. The next day, we'd wake up extra early and head to the lost Inca city."

"We were promptly picked up in our van along with seven other people from Argentina and Chile. About halfway through the weaving roads, we hit intense fog, careening through switchbacks in the thick white mist. Once we made it through, we came to a dead stop for over two hours. It turns out there were teachers striking and blocking the road. After a while, people got out of the van, which was stalled to stop, to stretch their legs. My husband got out and disappeared out of sight, too. Awhile later, we started moving again. But my husband wasn't back in the van and didn't have his phone. We starting moving faster and faster, and the driver told me he couldn't wait for him. Essentially, we'd driven away and left my husband somewhere along the road. I could only hope he'd walked ahead and not backward."

"We finally found him. Apparently, he'd gone to the front lines of the strike to chat with the protesters. We picked him up — the van didn't even make a full stop, we just literally swung him in. We got to the drop off point almost three hours late, where we then walked along the railroad during sunset and into pitch blackness using my phone as a flashlight until my phone battery died. We finally made it to Aguas Calientes around 9pm, ready to wake up at 3:30am to line up for the bus to the ruins. It was a crazy experience, but Machu Picchu was worth it!” — Lori Zaino, Senior Writer