Articles
Mike Arnot is the founder of Boarding Pass NYC, a New York-based travel brand and a marketing consultant to airlines. A private pilot, he can sometimes be found above the skies of New York City.
Follow
Oct. 28, 2018
•
6 min read 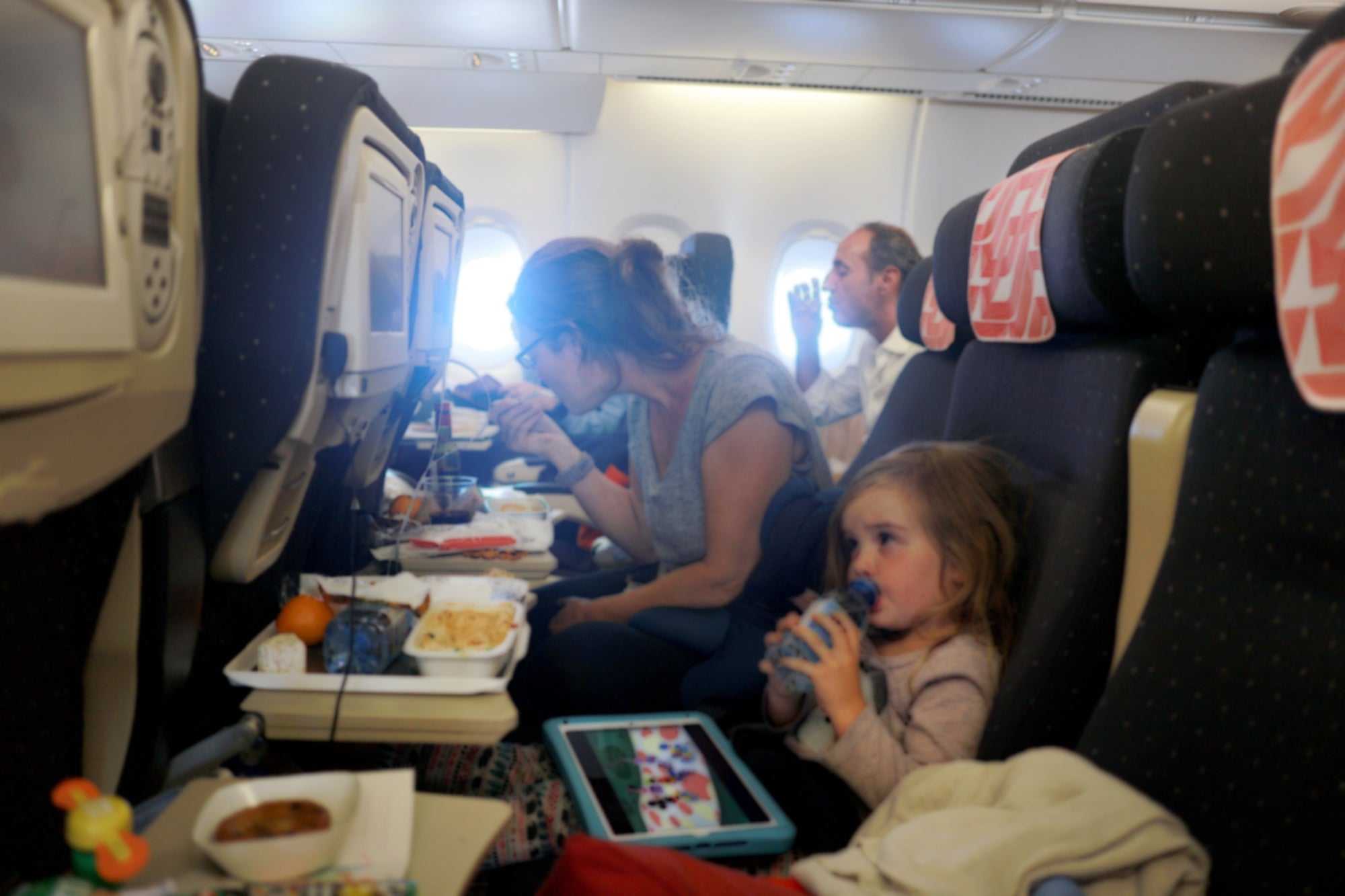 If you are a parent flying with children, you probably know that some flights with kids have the potential to turn into your own personal Halloween — a horror story for the ages. (And for your fellow passengers, sometimes.) It's not the kids' fault, of course — even grownups can get really testy onboard airplanes. You know how it feels: You're constantly worried about your son or daughter's ears hurting. You're self-conscious about being that parent with the screaming child in row 18.

But cheer up: It could be a lot worse. It could be, for example, something like one of the stories we collected below. Four horrifying tales of poop, puke and creepy ladies — and one featuring a travel voucher to soften the blow.

I'll start with my own experience. (The other stories come from friends, whose full names have been withheld to protect their privacy.)

It was an early flight from JFK. I skipped breakfast and picked up some food at the airport for my son, Fred, including orange juice, which he downed. That was my first mistake. Within 10 minutes, just before boarding, he got a strange look on his face, and proceeded to vomit orange juice and bagel all over the carpet in the terminal. I literally held him up in the air and pointed him downwards. Success! Nothing on me. I wiped him off, and he was fine.

But then, it got worse.

Shortly after departure, all of the sudden my lap is warm and my jeans are really wet. I'm covered in more vomit from Fred — a lot of it. Minutes into a six-hour coast-to-coast flight. A flight attendant noticed I was flying alone with my son and came to help me mop up. She must have been a mom. I'm still grateful.

"When our daughter was 18 months, we took her on a flight to Hawaii. We gave her Benadryl (on our pediatrician’s recommendation). Instead of sedating her, it had the opposite effect. She ran up and down the aisles, annoying everyone on the flight, then pooped through her outfit in a massive blowout. I went to change her in the airplane bathroom. A miniature torture chamber. As I struggled with the diaper in the tight space, she decided to finger-paint the walls with her own feces. Once we landed, we picked up our rental car. On the way to the hotel, she projectile-vomited all over the back seat. Aloha!" - David J., Milwaukee

"My husband and I were flying our three-month-old from the US to the UK. It was her first time flying so we were anxious to see how it would go. Upon boarding, we found that we were sitting near a nice middle-aged lady who was enamored with our child. We were relieved. The woman asked our child's name and offered to hold her if we needed a break. (It was a sweet offer, but one we knew we wouldn't actually take her up on.) The lady then happily munched on a bag of Cheez Doodles. Later, the lady came over to see the baby; she cooed our child's name while stroking her cheeks with her orange Cheez Doodle fingers. I was dying to say something but we had another seven hours to go with this woman and I didn't want things to get awkward."

But they did."The bassinet arrived and we tried rocking our baby to sleep and placing her in the bassinet but she kept waking up. 'Just put her in my lap!' the lady said, placing the airline pillow on her thighs. We assured her that it was fine and we could manage. A few hours and a short nap later, I was standing and rocking the baby. Someone came up behind me and reached for the baby. Thinking it was my husband, I instinctively handed her over. I turned around. It was the lady! She took off with the baby, walking her down the aisle of the plane. I gave my husband a look of horror and trailed after them helplessly, unsure of what to do. Luckily, our child's newfound stranger aversion kicked in and she almost immediately started screaming. 'She doesn't like strangers,' I said apologetically, reclaiming my child. Everyone in the plane looked on lovingly, probably thinking how sweet Grandma tried to help Mom out with the baby. I wanted to scream, 'I don't know this lady! She just stole my baby!' but instead, I returned to my seat with my crying child." - Jenna C., Brooklyn, New York

You’ve Got to Hand It to Delta

"I noticed it on boarding but didn't think too much of it. But then it got worse and worse as the flight went on. The smell of poop. It was around me. I knew it was coming from below me. At first I thought I might have stepped in it. I reached under the seat...and put my hands directly into an unwrapped diaper left there by the last occupant. Like, full hands into the diaper. The flight attendants were helpful. They came over and apologized profusely, and gave me mini bottles of vodka to clean my hands.In the end, Delta gave me a flight voucher for $200. I used it to fly to Miami, so I guess it was worth it. It's funny that the trauma could be measured in Delta dollars." - Katie S., New YorkMike Arnot is the founder of Boarding Pass NYC, a New York-based travel brand.