Articles
Kaeli Conforti is a digital nomad and has been backpacking solo around Southeast Asia, Australia and New Zealand since January 2018. She loves inspiring others to travel the world and create their own adventures.
Follow
Sept. 22, 2019
•
7 min read 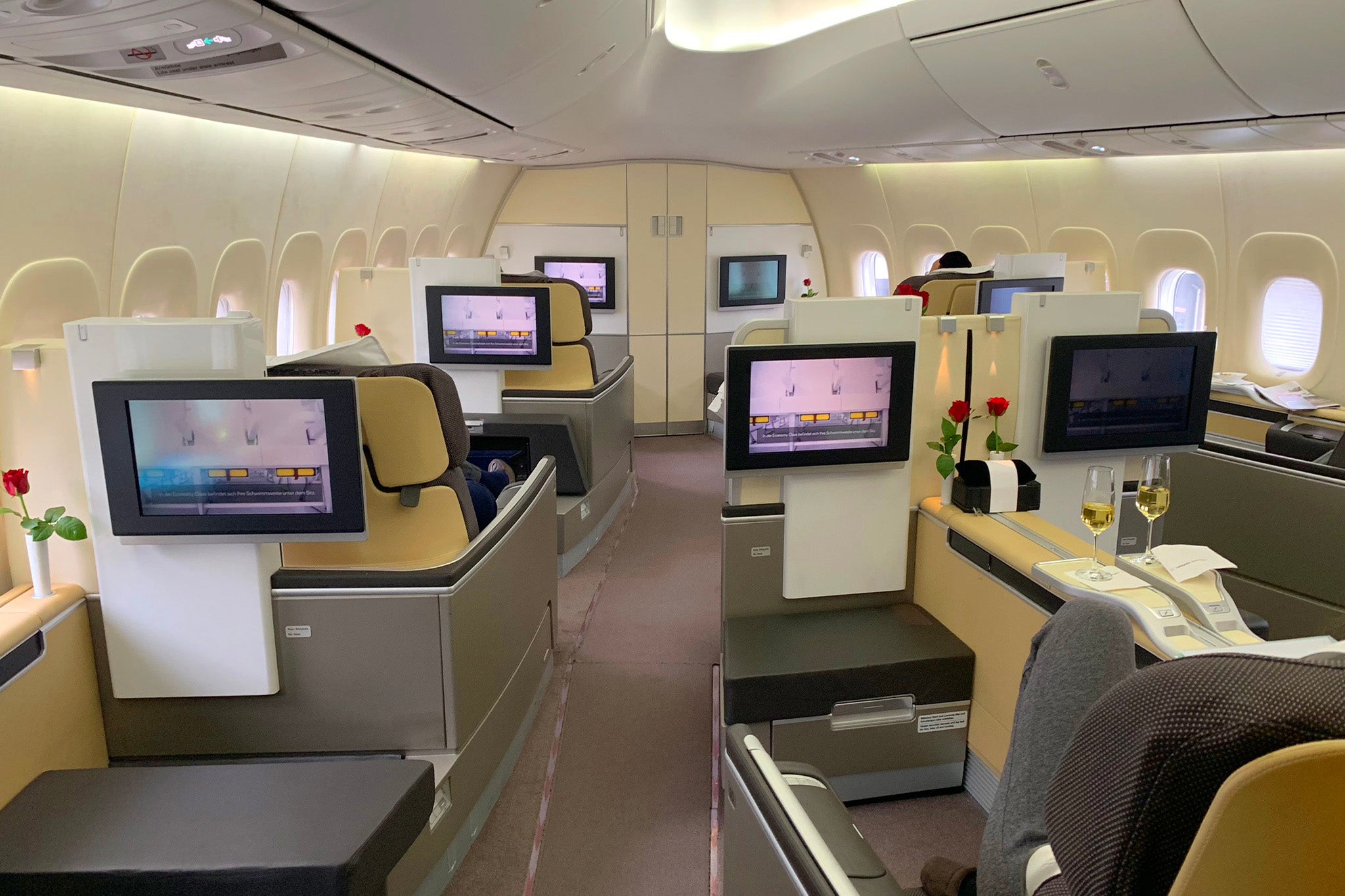 We recently asked our TPG Lounge members to share the best redemptions they’ve ever had with the American Express Membership Rewards program. Here’s a look at some of our favorite answers. (Some responses have been lightly edited for style and clarity).

Epic flights to Europe and the Middle East

Some TPG Lounge members told us how they'd transferred their American Express Membership Rewards points (MR points) to one of the program's partner airlines so they could arrive to their final destinations in style aboard some the best business- and first-class products in the sky.

"I’m sure there are better ones on this list but I’ve consistently booked the throne seat in business class on Swiss Air from Los Angeles (LAX) to Frankfurt (FRA) for 55,000 Amex MR points and only a $40 fuel charge. My biggest success with Amex MR points is the consistency of getting this flight, even during peak seasons." — Zachary S.

"80,000 Amex MR points transferred to Aeroplan, then Lufthansa, to fly first class from Prague (PRG) to Frankfurt (FRA) to Washington, DC (IAD) to Denver (DEN). They picked me up in a Porsche [and took me] to the best lounge ever, then another Porsche to the 747. " — James C.

"Booked Qatar Airways QSuites from Doha (DOH) to Zurich (ZRH) by transferring Amex MR points to British Airways and redeeming just 37,500 Avios plus 112 euros in taxes and fees for seven hours in the world's best business class thanks to Zurich being in a lower mileage band than, say, London. This is now a bit more expensive post-2019 partner devaluation, but still a good deal." — Matthew T.

"46,000 Amex MR points transferred to Virgin Atlantic for a Delta One nonstop flight from New York (JFK) to Tel Aviv (TLV) during the 30% bonus." — Dennis D.

"98,000 Amex MR points to Emirates to fly in first class on the A380. It was everything I ever wanted. The best is flying out of Dubai though, so you can take advantage of the first-class lounge and free a la carte dining." — Johnny Z.G.

Continuing that trend, many TPG Lounge readers said they'd used Amex MR points to fly to and from Asia in first and business class on Cathay Pacifc, EVA Air, ANA and Delta.

"I try to wait for the British Airways bonuses and use those to jet around Asia in Cathay Pacific's business class or Cathay Dragon, which has excellent J class seats, too." — Albert G.

"47,000 Amex MR points transferred to Virgin Atlantic for a one-way flight from Beijing (PEK) to Detroit (DTW) in Delta One Suites during the 30% transfer bonus period. It was my second time in the Suites but I loved it so much. It’s the only product I’ve flown where I can actually get some sleep." — Brian M.

"46,000 Amex MR points transferred to Virgin Atlantic during the 30% promotion, redeemed for a one-way flight from Seattle (SEA) to Beijing (PEK) on Delta One (normally 60,000 points). Got it for two people round-trip. That’s 184,000 instead of 240,000. I took the risk of transferring first, then deciding on the exact dates, which was partly due to the low cancellation and change fee of $50 per person per trip. And yes, you can book Delta flights directly on the Virgin Atlantic website if there is available award space." — Shu Y.

"I used 77,000 Amex MR points of the sign-up bonus to snag my return trip in EVA Air business class from Bali (DPS) to Los Angeles (LAX) via Taipei (TPE). It was probably a $3,000 ticket so it was a nice redemption rate via Air Canada's Aeroplan program." — Tom M.

"[Transferred] Amex MR points to Virgin Atlantic — with the 30% transfer bonus — to get two ANA first-class tickets from Los Angeles to Japan round-trip, flights that were valued at $35,000." — Jason F.

"Redeemed 170,000 Amex MR points, thanks to 30% transfer bonus, for two round-trip first-class tickets on ANA for next April to visit Japan during cherry blossom season! Best redemption value ever at 23 cents per point!" — Christopher B.C.

"Did the exact same thing for our recent trip to Japan. 85,000 MR points to fly round-trip in ANA first class. Best redemption ever!" — Peter H.

Not that we're jealous — okay, we're totally jealous — but a few TPG Lounge members were able to parlay their MR points into epic round-the-world journeys in business class.

"[Using the] Virgin Atlantic 30% bonus to fly round-trip in ANA first class to Japan was the best value. The most interesting was arguably 110,000 points per person for a round-the-world trip in J via ANA to gift our son with seven new countries for his seventh birthday." — Ashley W.H.

"An ANA around-the-world award from Toronto (YYZ) to Taipei (TPE) to Bali (DPS) to Istanbul (IST) to Athens (ATH) to Zurich (ZRH) to YYZ, all in business class on EVA Air, Turkish Airlines, Swiss Air and Air Canada. 125,000 Amex MR points plus $450 in taxes. You do have to call in to book the award but it only took about 30 minutes." — Kyle M.

Featured image by Asiana offers one of the cheapest ways to book Lufthansa first class, but they do pass on massive fuel surcharges. Photo by Zach Honig / The Points Guy
Editorial disclaimer: Opinions expressed here are the author’s alone, not those of any bank, credit card issuer, airline or hotel chain, and have not been reviewed, approved or otherwise endorsed by any of these entities.