Articles
Mike Arnot is the founder of Boarding Pass NYC, a New York-based travel brand and a marketing consultant to airlines. A private pilot, he can sometimes be found above the skies of New York City.
Follow
March 10, 2020
•
8 min read 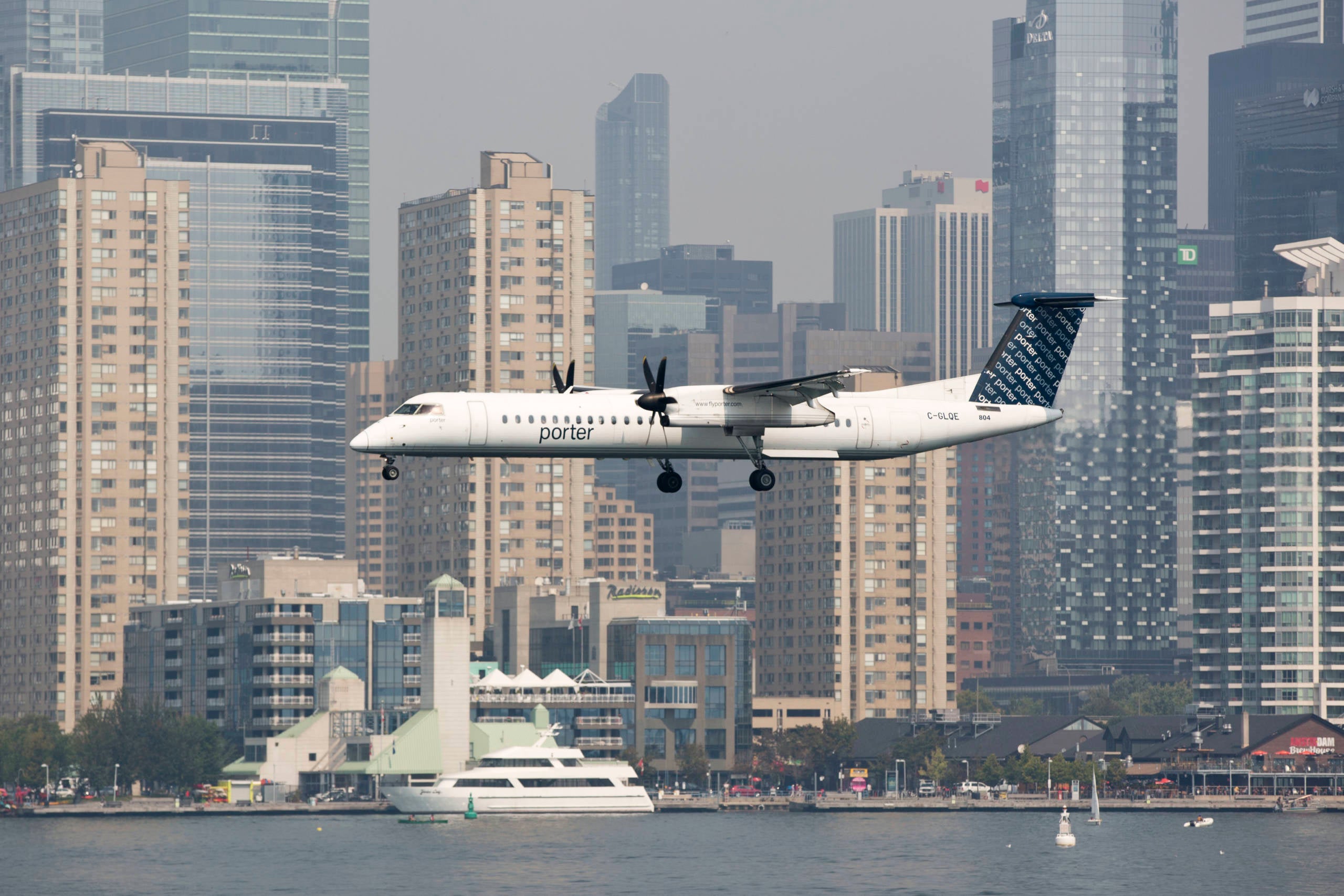 This is why you can't fly to LaGuardia from Toronto's convenient island airport
This post contains references to products from one or more of our advertisers. We may receive compensation when you click on links to those products. Terms apply to the offers listed on this page. For an explanation of our Advertising Policy, visit this page.

Porter Airlines is a godsend for travel to Toronto from New York, Boston or Chicago. Its main hub, Billy Bishop Toronto City Airport or YTZ, is on an island adjacent to downtown Toronto.

But the airport experience in New York isn't quite as pleasant as the views on landing at YTZ. Porter's New York home is Newark's Terminal B. From midtown Manhattan, it's quite a schlep to make for the roughly one-hour flight to Toronto. To top it all off, passengers returning from Toronto clear U.S. customs and immigration at EWR — along with a mass of humanity from around the world.

The answer is simple: there's no U.S. Customs and Border Protection (CPB) Preclearance at Billy Bishop Airport, and no immigration facilities at LaGuardia. Passengers flying to LGA from Canada clear customs and immigration at their departure airport. But they can't from Billy Bishop.

Preclearance at Billy Bishop airport is at least another year away according to Porter and PortsToronto (the airport authority) despite an agreement between Canada and the U.S. signed exactly four years ago.

Porter Airlines sends more than 450,000 passengers per year to the U.S. from Toronto, according to a spokesman for the airline. In contrast, Winnipeg and Halifax airports shuttle approximately half that number to the U.S. — but have Preclearance facilities whose operating costs are covered by the U.S. government. Here's the rub: new proposed Preclearance facilities such as Billy Bishop and Quebec City have to pay their own way, pursuant to that March 10, 2016, agreement between the two countries.

So, what are the costs involved with Preclearance at Billy Bishop? As the airport is negotiating with the Canadian federal government, it declined to comment.

But we can estimate. The day-to-day costs relate primarily to the estimated 20 to 25 U.S. border inspectors that the facility will require. There are also infrastructure and other capital costs, according to a spokesperson with the Canadian government. That's on the order of $10 million per year, by my estimate (and verified with industry sources). Sources at the U.S. CPB said the agency is eager to open a facility at Billy Bishop, which means more jobs for its officers, and that the agency recognizes the economic value of access to downtown Toronto. Preclearance itself was developed for the Canadian market in 1952, and the CPB says that it enhances national security and facilitates growing international travel and commerce.

So, if the U.S. government isn't footing the bill, who's left?

A passenger fee could be levied; it would add around $25 per fare. But PortsToronto, the agency operating the airport, opposes this. "Passengers should not bear the brunt of implementing Preclearance at Billy Bishop Airport. Further, a passenger embarking from Billy Bishop Airport should not pay materially more than they would flying from other airports which already have established Preclearance services," a spokeswoman said.

Indeed, those user fees or so-called "airport improvement fees" have crushed hopes for operators such as Spirit Airlines, JetBlue, Southwest or Frontier of operating to and from Canada, regardless of the airport, an industry source familiar with those considerations told me. It's just too expensive for a low-fare model, and passengers don't want to pay.

A spokesperson for Canada's Minister of Transportation Marc Garneau said "[t]here is no dedicated source of federal funding to support any Preclearance operations in Canada."

And it's not just Billy Bishop airport that suffers, but Quebec City's airport, too.

Air Canada: Not So Fast, Porter

The elephant in the room is Air Canada, which carries by far the most passengers between Canada and the U.S. Between Toronto's main Pearson Airport (YYZ) and New York City's airports alone, the Canadian flag carrier operates around 20 flights per day. WestJet, in contrast has eight. On some flights Air Canada operates its biggest single-aisle jet, the 190-seat Airbus A321. The airline has invested heavily in an impressive new Maple Leaf lounge at LGA.

Preclearance at Billy Bishop would threaten Air Canada's lucrative hold on revenue from business travelers; most of Air Canada's flights to New York land at LGA, with its convenient access to midtown Manhattan. For example, If you've got business in Canada and work at a midtown New York bank or law firm, it's a no-brainer to fly from LGA's new amenity-rich pier. (And you'll rack up Aeroplan points, too).

A spokesman for Air Canada said that it "believes any additional resources for U.S. CBP in Toronto should be devoted to Toronto-Pearson, where resources are currently constrained, causing line-ups and delays. This way, all carriers flying between the U.S and Canada and the vast majority of transborder travellers can benefit."

Another issue to note is that the runway at Billy Bishop is too short for jets. No U.S. major airline operates the turboprops that can land there, except West Coast-based Alaska Airlines. And slot pairs at Billy Bishop — the windows for takeoff and landing that are critical at busy airports — are (for now) fully allocated; Porter Airlines has 172 slots and Air Canada has 30, according to the PortsToronto Master Plan.

In 2015, Porter proposed operating Airbus A220 jets out of the Island airport. The result was a war between it, Air Canada, local elected officials and the residents of the island, with PortsToronto caught in the middle. The proposal was rejected by Minister Garneau, but not before Air Canada lobbied publicly against it, even commissioning a study that cautioned against lengthening the runway to accommodate jet traffic.Then there's the issue of slots at La Guardia. WestJet and Delta are under pressure by competitor airlines to return the eight slot pairs WestJet holds at LGA for re-allocation, because of the antitrust implications of the WestJet/Delta joint venture. Preclearance aside, those slots would not be immediately be available to Porter. In theory, Air Canada or WestJet could deploy their respective fleets of Q400 turboprops to compete head to head with Porter at Billy Bishop, but they each already have full flights from Pearson to LGA on larger aircraft.Still, Billy Bishop makes the case that it needs Preclearance regardless of whether slots at LGA or Washington National are available to its major tenant, Porter. It is preparing a formal application to the U.S. CPB to request Preclearance, if it can solve the issue of who pays for it.

"This is taking time to work through given other priorities before the government at present. We are very keen to implement Preclearance and would like nothing better that to arrive at a solution in short order that would enable us to offer Preclearance at Billy Bishop Airport," the PortsToronto spokesperson said. "Were we to agree on a financial model and approach, we estimate the new facility could be up and running in a year to 18 months, " she said, adding that "much of the planning has already taken place and the terminal upgrade undertaken in 2018 contemplates a future Preclearance facility."

Toronto is hot these days, with a leading international film festival, well-regarded museums and a top-notch scene for foodies. With any luck, Preclearance will come to Billy Bishop in time for the fifth year anniversary of the announcement.Mike Arnot is the founder of Boarding Pass NYC, a New York-based travel brand, and a communications consultant to airlines, none of which appear in this article.