Articles
Andrew Kunesh is a senior editor at The Points Guy covering loyalty programs. He's been a miles and points fanatic since 2014 and previously wrote for Upgraded Points and Credit Karma. Outside of the travel world, Andrew is a cyclist, craft coffee aficionado and — despite now living in NYC — a Chicagoan at heart.
Follow
Sept. 19, 2020
•
10 min read 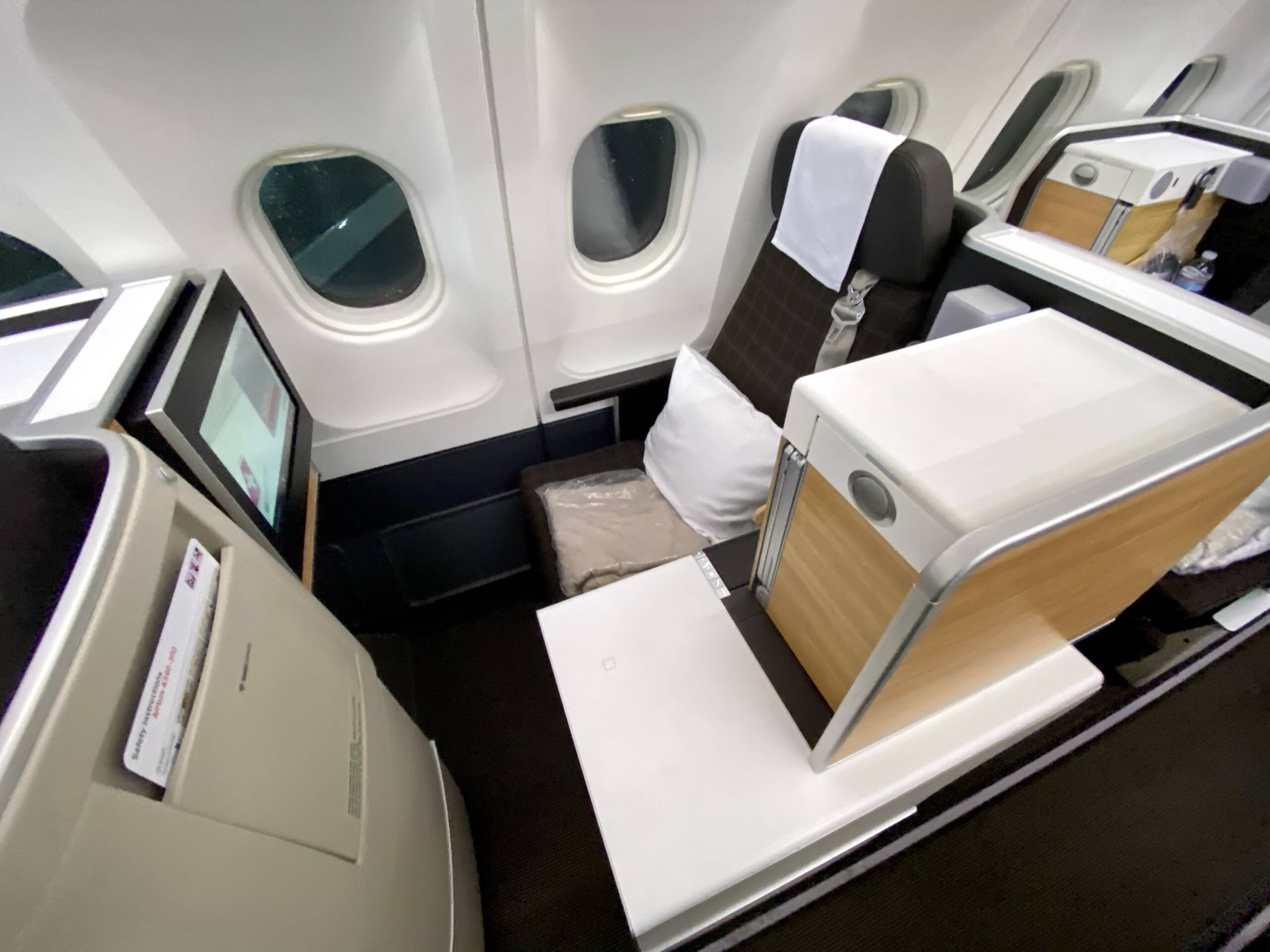 I recently traveled from New York City to Prague for a family matter during the coronavirus pandemic. It was my first time traveling internationally since the start of the outbreak, and — unfortunately — right at the start of the "second wave" of infections in the Czech Republic. When I traveled, the country still wasn't admitting Americans as tourists, but I could enter with my Czech passport and a negative coronavirus test on arrival.

I flew Swiss business class from Newark (EWR) to Prague (PRG) via the airline's hub in Zurich (ZRH). Before I booked, I'd heard horror stories of massively reduced service on other airlines — mostly U.S. carriers — during the pandemic. That said, other travelers had told me that most Lufthansa Group carriers (Austrian, Brussels, Lufthansa and Swiss) were operating at full-service. So naturally, I booked a last-minute Swiss ticket and was on my way.

Interested in what I experienced on my flight? You're in the right place. This won't be a full review of my Swiss flight from Newark to Zurich, but I want to share my general experience of flying the airline during the coronavirus pandemic from start to finish — let's dive in!

For more TPG news and reviews delivered each morning to your inbox, sign up for our daily newsletter.

Check-in was smooth, the lounge was empty

My Lyft pulled up to a mostly empty Newark Liberty International Airport. My flight departed late in the evening — 9:55 pm — so the airport was almost empty. I quickly checked my bag, zipped through security behind the flight crew and made my way to the Lufthansa Business Class Lounge.

Upon arriving, I was told that the lounge was operating at minimal service. There was no hot food or drinks beyond bottled water. Instead, it was only prepackaged snacks. This was a stark contrast to the Swiss Business Class lounge in Zurich (ZRH), which was operating at full service.

The lounge was almost empty. I didn't stay too long since I arrived at the airport late, but it was surely a depressing start to an otherwise excellent experience.

To me, this is a clear cost-cutting measure by Lufthansa. There should still be some measurable amount of service offered to business class and elite flyers during the pandemic. This is especially true when you consider that other lounges — even Admirals Clubs — are bringing back limited food options.

I made my way to the boarding gate and boarded the plane quickly. After my experiences with United, Delta and American during the pandemic, I wasn't expecting much. That said, I was almost immediately offered a glass of Champagne by a masked flight attendant, which I happily accepted. He then took my coat and came back with an amenity kit, dinner menu and breakfast card.

In stark contrast to the lounge, this was an excellent first impression. I was almost sure that pre-departure service would be limited during the pandemic, but that wasn't the case. As strange as it sounds, this little bit of normalcy transported me to a time before the pandemic where travel was normal, luxurious and fun.

Related: Great lounge and service: a review of Swiss Air Lines’ business class on the 777

The seat was nothing special, but nice and clean

I finally settled into my seat, which was just as nice as the last time I flew Swiss transatlantic. I've always found Swiss' business class seat to be very nice, but nothing special. That's fine to me, though, because Swiss' onboard service is always top-notch. It gave me a nice place to rest and recharge on my overnight flight to Europe.

Interestingly enough, the seat still had headphones, a blanket, pillow and bottle of water waiting for me. I didn't use the headphones but the blanket and pillow both seemed clean enough and were welcomed for the overnight flight.

There were only six people (including myself) in business class on this flight. This made sense given the fact that most Americans can't enter Europe, but it was still a sad sight to see. The last time I flew Swiss, the entire business class cabin was full from Chicago (ORD) to Zurich (ZRH).

Related: A Review of Swiss First Class on Its Flagship Boeing 777-300ER

In-flight service was unchanged (and amazing)

After a smooth takeoff, the flight attendant came back around for my dinner order and breakfast card. He told me that dinner would be served in two-courses and that they had to be covered in plastic. Other than that, he said, things would be the same as ever. Happy to hear that, I ordered the beef fillet for my main course and a seasonal beer for my drink.

Side note: this beer was really, really good. I am admittedly a bit of a beer nerd, but this Swiss craft beer was dark yet smooth and full-bodied. I highly recommend you give it a try on your next Swiss flight. I enjoyed the beer and read a magazine on my Kindle while waiting for the flight attendant to return with the first course.

The first course arrived rather quickly and was pretty excellent. It was a decadent mix of cheese, meats and a small salad, which were tasty and fresh. I particularly enjoyed the cheeses (oh, how I missed airplane cheese). I was also offered my choice of bread from the breadbasket. I thought those wouldn't make it in a post-coronavirus world, but it's seemingly alive and well.

As you can see in the photo below, the food was covered with a hard plastic cover. To me, this is much more attractive than using plastic wrap but still provides protection and peace of mind. It's nice to see Swiss take this precaution while still keeping a true premium product.

Course number two arrived shortly after I finished my meal and — as you'd expect from Swiss — was delicious. The beef had tons of flavor and the vegetables were perfectly cooked. Oddly enough, this course didn't come plastic-wrapped, but I felt OK eating it since the flight attendant was wearing a mask.

After this course, the flight attendant offered me dessert. Being extremely full, I politely declined but asked for a hot mint tea. It arrived in record time, so I drank it, put my seat into the lie-flat position and quickly dozed off.

I woke up when we were about an hour-and-a-half from Zurich. Like clockwork, the flight attendant came with my breakfast order. I ordered a small spread of juices, espresso and croissants, and everything arrived as I ordered. There were no replacements, which led me to believe that business class cabins are being stocked with food according to the number of people flying.

After we touched down, the flight attendant brought me my jacket and I was off to clear customs. I left with the flight happy, rested, well-fed and excited about the future of travel.

Related: The good – and bad – of flying United’s transcon Polaris during the pandemic

My Swiss business class was a glimmer of hope for luxury travel during the coronavirus pandemic. I saw no noticeable service changes from when I flew Swiss business class in 2017, making it clear to me that Lufthansa Group wants to keep its premier brand image. I think that this will be a huge help for the airline once the pandemic is over and we get back to flying as normal.

I was pleasantly surprised at the level of service offered by Swiss. Even during normal times, this would've been a well above average flight. I am personally excited to return to the skies with Swiss soon to experience the great food, service and hard product.

My only gripe? The Lufthansa lounge at Newark. I wouldn't expect a full buffet during these tough times, but offering some light food and drink options for travelers shouldn't be too much to ask. That said, the excellent flight more than made up for the lounge mishap.