First look: What it's like at a reopened Six Flags Magic Mountain 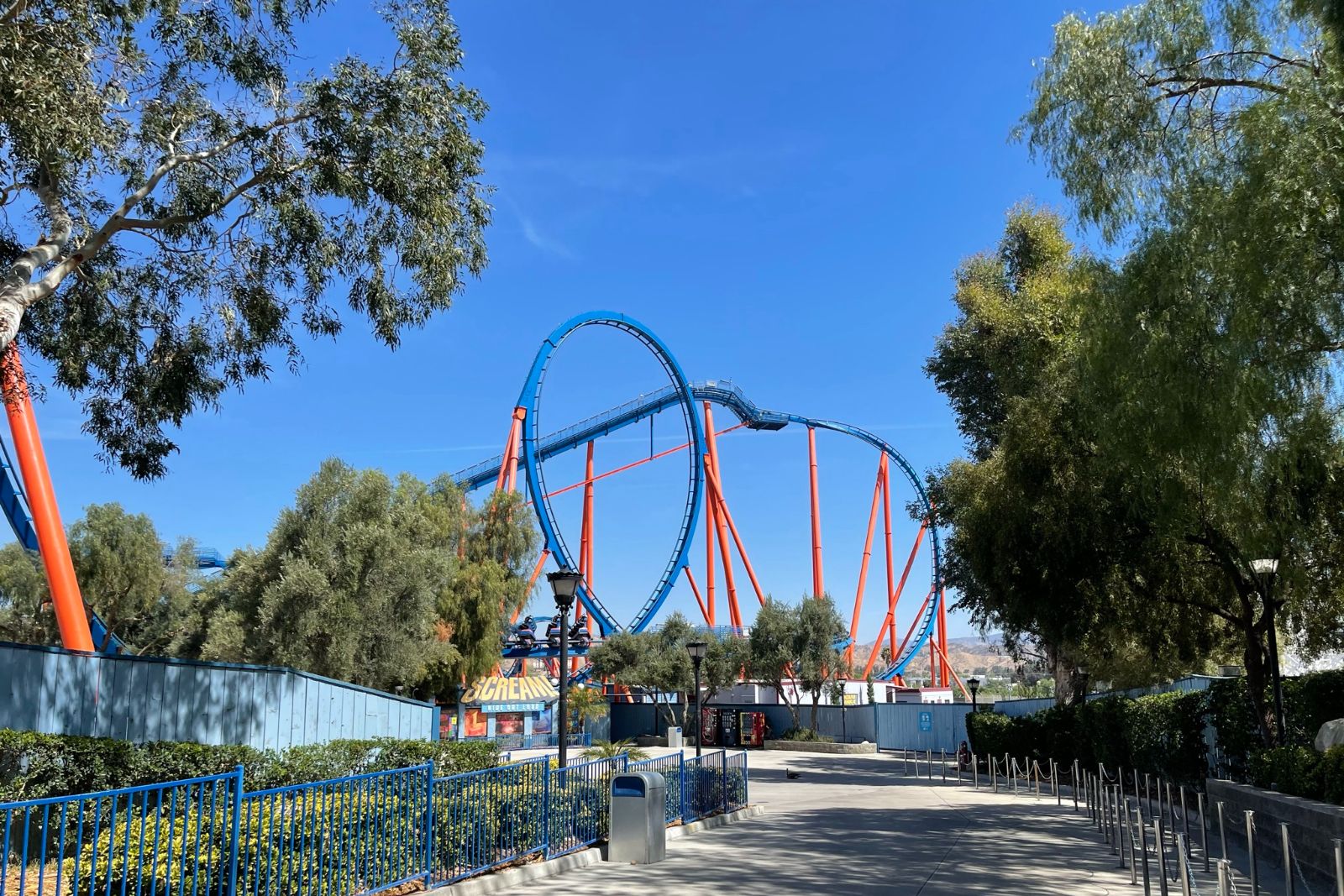 Living in the entertainment capital of the world has its perks.

For anyone who grew up in Southern California, there are at least four major theme parks about an hour away in each direction: Six Flags Magic Mountain, Universal Studios Hollywood, Disneyland and Knott’s Berry Farm.

As California eases its COVID-19 restrictions, one of the first theme parks to reopen is Six Flags Magic Mountain.

Located in Valencia, which is about an hour north of the Los Angeles metropolitan area, Six Flags Magic Mountain has been the place where you can escape from the hustle and bustle of the city and scream your way through more than 100 rides, including 19 roller coasters.

For locals, it’s simply known as “Magic Mountain” or “Magic.”

When Six Flags Magic Mountain announced that it would reopen at the beginning of April, I decided to check it out.

Magic Mountain sits on 260 acres and is also known as the “Thrill Capital of the World.”

Because of its vast acreage, the property’s parking lot has also been used as a Los Angeles County Department of Health Mega Point of Dispensing (POD) site for the COVID-19 vaccine since January.

The park officially reopened on April 1 to members only. I went on April 3, the first day it reopened to the general public. However, there were still capacity limitations per California state requirements. At this time, only California residents are allowed to buy tickets and the entire guest party can not exceed more than three households.

When I arrived at the site, there were two lines: one going to the park and the other going to the vaccination site.

As I pulled up to the entrance, I was charged $25 for a parking permit.

Then I was waved to the parking lot and directed to a parking spot. Just on the other side of the lot were the vaccination stations.

Once I parked, I headed to the entrance where I was immediately sent to park staffers checking for tickets and then sent to a covered contactless thermal imaging area that checks for temperature. Similar to the setups at some airports, I walked through that area with no issues.

Then I walked through the touchless bag checks and metal detectors before reaching one last gate where staffers scanned my ticket.

A reopened park in the age of COVID-19

From the moment I was let into the park, I was immediately greeted “welcome” by staffers in blue uniforms.

On a typical Saturday, this park would be teeming with crowds. But due to COVID-19 restrictions, theme parks in Los Angeles County are only allowed at 15% capacity. That capacity will move up to 25% on April 5 when the county moves into California’s orange tier reopening plan.

So the crowds were sparse at best. It felt as if you rented the entire park for only you and your friends.

It was clear how COVID-19’s impact on Six Flags is something that cannot be ignored.

There were multiple signs to remind guests to “Do the six”: wear your masks, wash your hands, cover your cough, keep your space, sanitize often and have fun.

Special mask “break zones” were available but otherwise, I had to keep my mask on at all times.

And it was all about contactless.

Cash wasn’t king here. The park was only accepting card or mobile payments. If you had cash, you could convert it to a prepaid Visa debit card through a special ATM.

There were several posters and signs encouraging people to pre-order their food on the Six Flags app and reserve an arrival time to pick it up. Unfortunately, not all restaurants were on this system. I found it easier to look for the places with the shortest lines rather than use the app.

The hunt for open rides

Despite having a large variety of rides to choose from, there were only a few open.

You could download the Six Flags app to check what’s open and how long the wait was but I found that it was not so accurate. Your best bet is to just go straight to the rides to find out yourself.

Many of the rides I wanted to check out were either closed or were not working at the time -- most notably the water rides, Jet Stream and Tidal Wave and Roaring Rapids. A water ride would have been nice in the 80-degree weather.

So I started exploring the park counterclockwise from the location I entered and looked for the first ride that was open.

First one up: Goliath.

Since this was early in the day, the wait time for this ride was less than 15 minutes. The ride itself was not at capacity, with only a few riders per car.

This roller coaster features a 255-foot drop at 85 mph.

I was not allowed to film on any of the rides for safety reasons so enjoy this official video of what it was like to ride Goliath.

The video doesn’t do it justice as you can’t feel the excess of 4.5 G’s running hitting your body. I can’t count how many times I screamed through my mask — at one point I thought it was going to fly off of my face.

Next, since the “thrill was calling,” I rode the following rides that were rated “Maximum Six Flags Thrills”: Riddler’s Revenge, Tatsu and West Coast Riders.

My favorite of the bunch was West Coast Riders, dubbed the “world’s first single track quadruple launch racing coaster.” It’s also one of the newest rides as it just opened last year. This had the longest wait of my day but was worth the wait for its four inversions that featured three zero-G rolls and a zero-G stall.

This ride was also located in a new LA-centric style of the park called The Underground.

I had not been to Magic Mountain in more than two decades. I remember it as a place to hang out with my group of friends during my middle, high school and college years. And it looks like not much has changed.

Many of this weekend’s park attendees reminded me of those youthful days of just letting go and enjoying the rides -- of course now under the backdrop of COVID-19.

In many ways, this reopened Magic Mountain offered something that the pre-pandemic park didn’t: space and time.

Magic Mountain is already a large park to explore and with the reduced capacity, it even felt larger. But that really allowed for safe social distancing.

As for time, because there were fewer people at the park at any given time, I could really take my time and enjoy the outdoors and not rush to the next ride or attraction.

While the park wasn’t at 100 percent in rides, it still offered a momentary escape for thrills, even for a day.

Related stories
Here are the best Black Friday travel deals of 2022
Great deal: Book business class tickets at premium economy prices with this Avianca LifeMiles sale
Holiday gift guide: TPG’s 22 travel-friendly picks for 2022
Vail Resorts lift-ticket sales capped; buy your Epic Pass by Dec. 4
Featured image by (Photo by Leezel Tanglao/The Points Guy)
Editorial disclaimer: Opinions expressed here are the author’s alone, not those of any bank, credit card issuer, airline or hotel chain, and have not been reviewed, approved or otherwise endorsed by any of these entities.