Articles
Alberto Riva Alberto runs our flight reviews and oversees special projects across several verticals. Previously, he was the managing editor of Vice News and worked at Bloomberg and CNN, where he was constantly trying to convince people to do more stories about airplanes. He speaks Italian, French and Spanish and one day he’ll be better at German.
Follow
July 17, 2018
•
5 min read 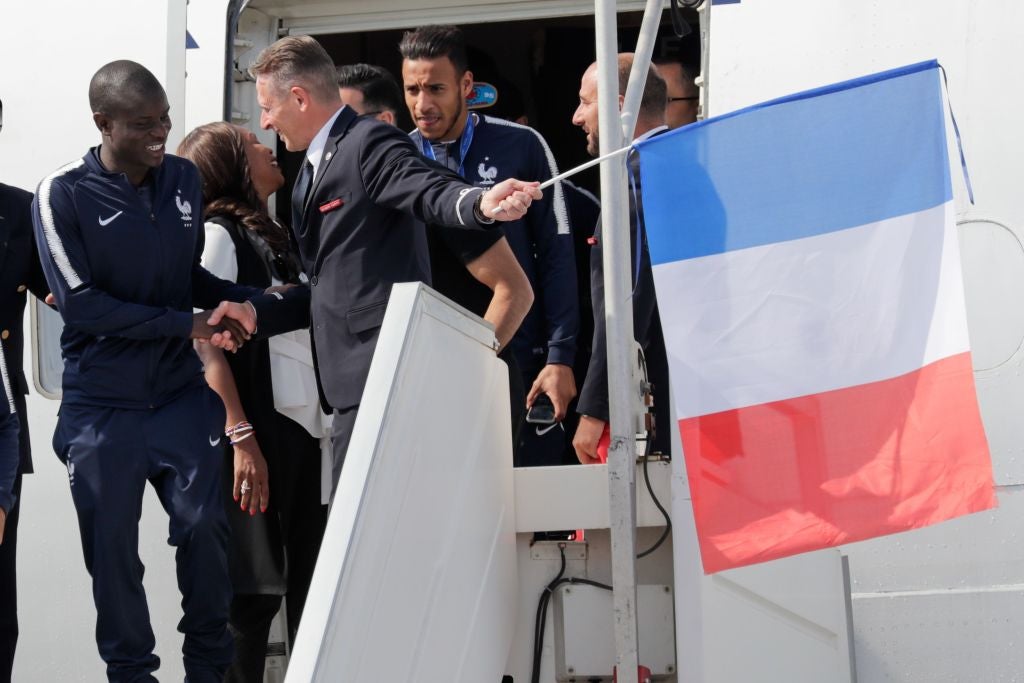 See the French World Cup Team Parade the Trophy at Paris' CDG Airport
This post contains references to products from one or more of our advertisers. We may receive compensation when you click on links to those products. Terms apply to the offers listed on this page. For an explanation of our Advertising Policy, visit this page.

You're at Paris' Charles de Gaulle Airport (CDG), waiting for a flight back to JFK. There are delays. Ho-hum.

But it's the Monday after the World Cup final, which France has won, and the entire nation is in a jubilant mood, so the airport personnel looks happier than usual... but wait, what's this commotion? Why are the ramp workers assembled on the tarmac, as if waiting for something big? And who are these athletic guys in blue walking into the terminal? Could it possibly be that they are the....?

That's right, it's the French national soccer team returning from Moscow, with the actual World Cup in their hands, right there under your eyes. The very trophy you've seen them hoist the day before, in front of a TV audience estimated at half the population of the Earth.

Such was the experience TPG Lounge member Cody Pope had Monday at CDG. He immediately posted about it in the Lounge, our Facebook group for TPG readers — and because this is 2018, he had the footage to prove it: There's French captain Hugo Lloris, walking off the plane and casually toting the most coveted sports trophy on the globe like it's just something he picked up at the duty free shop. Flanking him, coach Didier Deschamps, and right behind, bearded striker Olivier Giroud, and then the whole team following, with a bunch of really excited French people howling joyfully for a soundtrack.

Since we are TPG, when we saw the footage we were just as excited as those bystanders — but to find out what the French team had flown on their way back from the victorious Russian campaign. A quick look at the news agency images just beamed in from CDG revealed the team had just walked off an Air France Boeing 777 sporting the letters PK on the nose gear doors.

That identified it as a 777-200ER with the registration F-GSPK. Usually, Papa Kilo plies the Air France world network, but on Monday it was on a special mission. A check of tracking site FlightRadar24 revealed that in the past few days it flew to China, Panama, the US and Brazil, and that Monday morning it left Paris early to fly to Moscow's Sheremetyevo Airport (SVO) and bring back the winners, operating as a one-off flight, AF4001.

The players were welcomed, not surprisingly, as heroes, paraded down the Champs-Elysées and received by President Emmanuel Macron.

But what about their Croatian opponents, defeated but unbowed after fighting bravely until the last minute, in a 4-2 final that will be remembered as one of the most thrilling in World Cup history? They landed back in Zagreb to a welcome just as heroic as the victors', including a pretty unusual honor guard of majorettes. Their plane was a bit smaller, a Croatia Airlines Airbus A319, but their smiles were almost as big: They had just shown the world that their tiny nation of four million had a rightful seat at the biggest event on Earth.