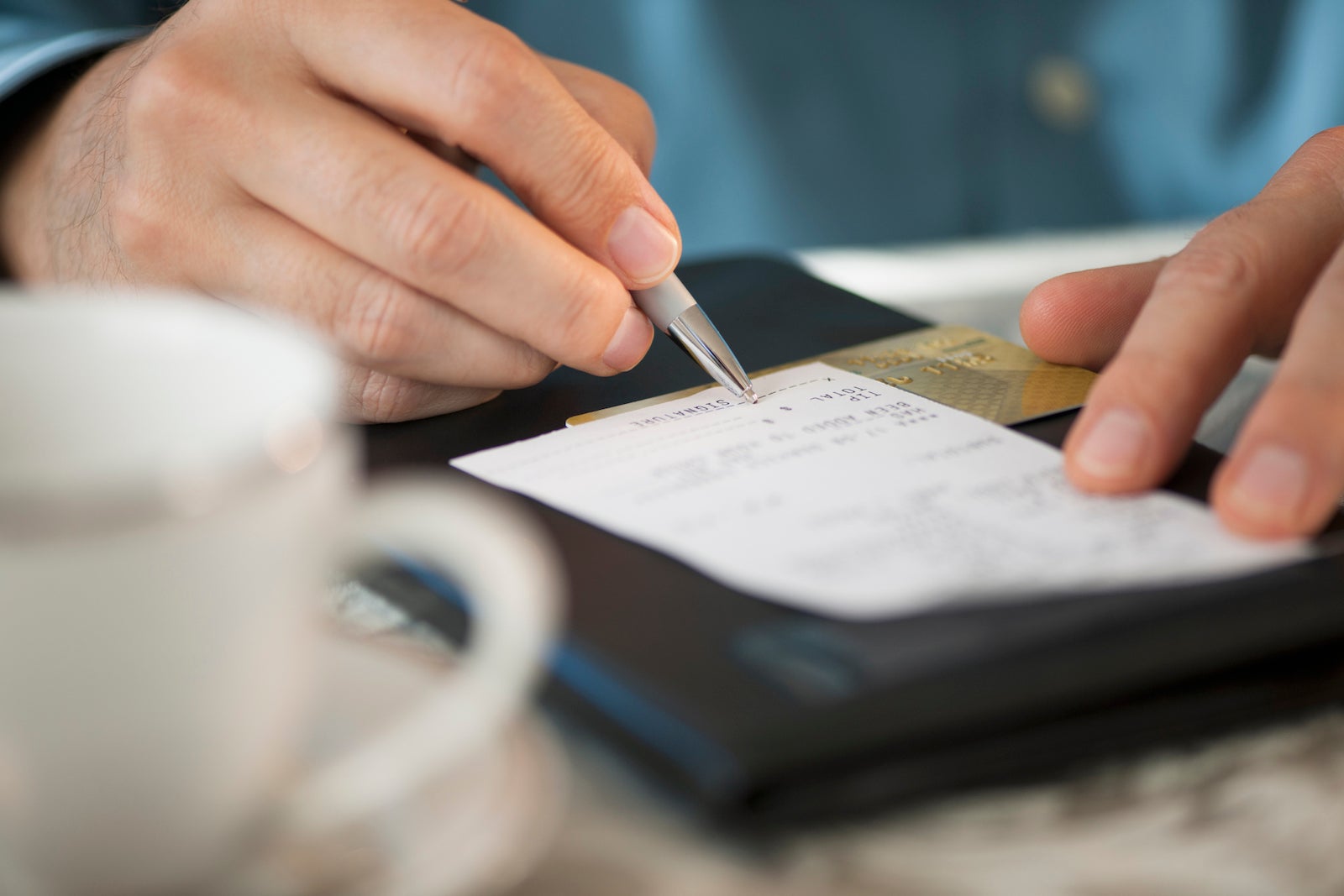 Why Your Favorite Restaurant May Soon Charge You More for Paying With a Credit Card
This post contains references to products from one or more of our advertisers. We may receive compensation when you click on links to those products. Terms apply to the offers listed on this page. For an explanation of our Advertising Policy, visit this page.

If you’ve dined out in the state of New York recently, you might have noticed that your bill was higher than you’re used to. And it may have been thanks to an extra line besides the usual tax and tip: a surcharge for paying for your meal with a credit card instead of cash.

Credit card surcharges are becoming a fact of life in New York now, because a decision by the highest court in the state has given restaurants and other retailers permission to charge us more when we pay with plastic.

In January, seven states had laws on the books that banned retailers from charging consumers extra for using credit cards. The New York legal case — which went all the way up to the US Supreme Court before being sent back down to the state’s highest judicial authority — reduced that list by one, and it could pave the way for credit card surcharges to be allowed across the entire country.

This is bad news for those of us who maximize the points and miles we earn from our purchases, since dining and retail purchases are such a huge category for earning bonus points. In an effort to make their card the go-to for purchases, credit card issuers have been leapfrogging each other particularly when it comes to the dining bonus category, starting with 3x on the Chase Sapphire Reserve, then 4x at restaurants on the American Express® Gold Card and now 5x for dining on the Citi Prestige® Card.

But if you see a surcharge like this on your bill, don't reach for your cash quite yet.

Whether or not you should pay a surcharge to use a credit card depends on how much value you're getting from your purchase. If you're only getting a flat 2 percent cash back on your credit card spending, there's no sense in paying a 3.5 percent surcharge — unless you're simply caught without cash.

However, if you're maximizing your dining expenses by getting 5x points on the purchase, those points can be a lot more valuable than the surcharge. After all, if you spend $200 at restaurants each week, that can earn you up to 52,000 points in a year -- enough to start you on a great vacation.

While the points certainly add up, there's no doubt it's psychologically painful for us consumers to have to pay a surcharge when we aren't used to doing so. If you're earning 5x points and paying a surcharge of 3.5 percent, you're effectively buying points at 0.7 cents each by using a credit card instead of cash. Yet it still can feel like we're getting overcharged, since this is a fee that we haven't had to pay before.

Why are restaurants adding this surcharge? When you pay for a meal or a product, the credit card company -- be it Visa, Mastercard, American Express or one of the others -- charges the merchant anywhere from 2 to 4 percent of your purchase as a fee for letting you use their card at that establishment. In 2013, credit card companies agreed in a settlement with merchants to let those surcharges get passed on to consumers.

But New York’s law effectively dictated how much retailers were allowed to tell their customers about the extra charges. They were free to call the lower prices on cash-paid goods and services a “discount,” but could not describe the extra they wanted to charge credit card users as a “surcharge.”

“Essentially, this case was really not about wanting a surcharge but the freedom to offer discounts for cash purchases and not get caught up in the semantics of whether it should be called a discount or a surcharge,” said J. Craig Shearman, vice president for government affairs public relations for the National Retail Federation.

Merchants argued that that was merely semantics — whatever you called it, credit card users were paying more, and by forbidding terms like “surcharge,” New York’s laws were trampling over the businesses’ freedom of speech. The US Supreme Court agreed, and at the beginning of 2019, New York’s high court did the same and effectively neutered the law.

It didn’t take long before several New York businesses started adding the surcharges to their menu and price lists, fully legally. In tabloids and online stories, the expected outrage ensued.

"I was on my ninth-anniversary dinner with my wife, and we went to a great fish place in Astoria, and the owner came by to say hi, so I said, 'Let me ask you what this service charge is on the bill,'" said Brian Odabashian, 36, a network engineer in Queens, New York. "He told me it was for a fee that the credit cards were charging him and that it only happens when you pay with a card. He said the credit card companies were passing it on to him, so he was passing it on to us."

But the reality isn’t that simple. New York legislators and courts, credit card companies and retailers all already agreed that it was OK for businesses to charge consumers different prices depending on whether they paid with cash or plastic. So you may have been paying more for whipping out your card anyway. The credit card companies and retail businesses all knew that we wouldn’t be happy about it. What they were really arguing about was which of them would get the blame.

The Supreme Court ruling simply forced New York courts to change sides. And now your favorite restaurant can be upfront about charging you more to cover the fee it pays to credit card companies to use their services, and why it’s doing so.

“It’s really more about showing a difference in price than showing a surcharge,” Shearman said. “90 percent of the time, it’s because the retailer is showing a cash discount.”

But why add a surcharge at all? The vast majority of retailers aren’t, at least for now. They’re simply absorbing the merchant fees charged by the credit card companies. Bigger merchants and chain restaurants bring in enough business to offset those charges, especially since the credit cards charge the lower end of the rates to places that do more business.

It’s the smaller places, the mom-and-pop joints, that can’t shrug off losing that little slice of the pie with every purchase. And in restaurants, where profits are notoriously razor thin, that 2 to 4 percent could make a huge difference. Sure, more and more merchants are going cashless, but critics have pointed out that there's a classist aspect to that, with a widening gulf between restaurants and stores catering to the well-off and those serving people for whom credit cards aren't an option.

(Representatives for Mastercard and American Express didn’t respond to requests for comment. A spokeswoman for Visa referred TPG to frequently-asked-questions and infographic pages on its website explaining surcharges to new merchants.)

At Mondayoff by Plant Love House in Brooklyn, New York, owner Benjaporn Chua has been offering a cash discount of 10 percent for the last year in an effort to persuade customers to give up plastic. The Thai restaurant pays credit card companies thousands a month, and is charged about 3 percent for each credit card transaction plus a variable add-on that fluctuates all the time. The restaurant had to encourage cash payments not only because they don’t eat into profits but because, as a new restaurant, it simply never had enough cash on hand to keep the place running day to day.

“Customers don’t really see the whole picture,” Chua said in a telephone interview. “They don’t realize we have so many expenses to pay — rent, ingredients, kitchen supplies, heat, gas, oil, staff. They only think of how the credit card is a convenience, but it hurts. We don’t even get paid by the credit card company on the same day. Let’s say a customers comes in Friday. We don’t get the money on Saturday or Sunday. We’ll probably get the money on Tuesday.”

In the case of the family-owned Greek-Albanian seafood restaurant Odabashian went to with his wife in April, the owner said that the business couldn't absorb the cost of the surcharge because New York City raised the minimum wage starting Jan. 1, 2019.

"I just said, 'OK, I"m going to pay it,'" Odabashian said, adding that, as an avid points collector, he rarely carries cash anymore anyway. "These small-business owners have so many fees and are on a tight budget, and I think with our bill of 100 and change, the fee came to like $6 or $7."

But even proponents of striking down the New York law said that tacking on surcharges to everything isn’t sustainable. After all, it’s common sense that when things cost more, fewer people will buy them, and that’s bad for business all around.

Odabashian said that he internally shifted the onus to credit card companies for the extra charges.

"People are going to stop using the cards with these fees," he said.

Featured image by Getty Images/Tetra images RF
Editorial disclaimer: Opinions expressed here are the author’s alone, not those of any bank, credit card issuer, airline or hotel chain, and have not been reviewed, approved or otherwise endorsed by any of these entities.