Articles
Clint Henderson is the managing editor for news at TPG. He worked in TV news for 20 years, including stints at ABC, MSNBC and Fox, before landing his dream job. Send tips to Clint.Henderson@thepointsguy.com.
Follow
March 12, 2020
•
5 min read 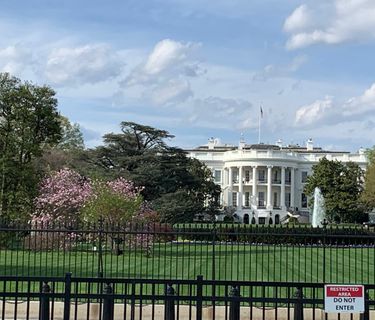 President Donald Trump bans travel from Europe for 30 days over coronavirus outbreak
This post contains references to products from one or more of our advertisers. We may receive compensation when you click on links to those products. Terms apply to the offers listed on this page. For an explanation of our Advertising Policy, visit this page.

President Donald Trump has ordered a ban on travel from Europe as coronavirus continues to spread in the United States. The ban will be in place for the next 30 days, and Americans currently in Europe will be allowed to return home. After the president spoke, the Department of Homeland Security clarified the president's remarks and walked back some of the comments.

Related: Should I travel?

Also tonight: Is the U.S. about to ban travel to Europe?

In an Oval Office address on coronavirus March 11 at 9pm ET., President Trump said, "We are marshaling the full power of the federal government. I am confident that we will significantly reduce the threat.. and defeat this virus."

The ban on travel from Europe will go into effect Friday, March 13 at Midnight and does not include Britain, Ireland, Scotland, Northern Ireland or Wales. The president had originally said last night that trade and cargo will also come to a halt under the new guidelines. That turns out not to be the case.

It also doesn't impact Turkey, Russia or other non-Schengen nations. The Schengen Area has free trade and open borders within much of Europe and includes countries like France, Austria, Germany, Estonia, Czech Republic, Italy, and Holland among others.

The ban will allow exemptions for Americans who have undergone screenings before returning home, but it is unclear at this point how they will be screened.

The president suggested it was partly Europe's fault that the outbreak is now spreading in the U.S., saying, "The EU failed to restrict travel."

President Trump's new policies on coronavirus and travel were not without critics. Sara Nelson, President of the Association of Flight Attendants, said on Twitter following the announcement, "This is outrageous. President Travel Ban is destroying everything that makes our country great. No consultation with experts or stakeholders. Dismantled vital government programs that actually help. He’s isolating us from the world and destroying freedom."

As part of the new coronavirus policy, President Trump also stated that hospitals in the U.S. will waive co-payments for coronavirus treatments, and that his administration is "cutting red tape to make antivirals available." He also pointed to the newly-passed $8.3 billion coronavirus funding bill.

The president also said that, for the vast majority of Americans, risk of contracting the virus is low. He did acknowledge, however, that the highest infection risk is for the elderly and warned that this group in particular should avoid non-essential travel.

He also encouraged all Americans to follow the CDC's hygiene guidelines including:

More than 1,000 people in more than 35 states are sick, and testing has not been widespread.

Dr. Anthony Fauci - the director of the National Institute of Allergy and Infectious Diseases - said today, "Things will get worse than they are."

"Today President Donald J. Trump signed a Presidential Proclamation, which suspends the entry of most foreign nationals who have been in certain European countries at any point during the 14 days prior to their scheduled arrival to the United States. These countries, known as the Schengen Area, include: Austria, Belgium, Czech Republic, Denmark, Estonia, Finland, France, Germany, Greece, Hungary, Iceland, Italy, Latvia, Liechtenstein, Lithuania, Luxembourg, Malta, Netherlands, Norway, Poland, Portugal, Slovakia, Slovenia, Spain, Sweden, and Switzerland. This does not apply to legal permanent residents, (generally) immediate family members of U.S. citizens, and other individuals who are identified in the proclamation."

The president said towards the end of the address, "Americans always rise to the challenge."

Photo of the White House from Spring of 2019 by Clint Henderson/The Points Guy.

Featured image by The White House in Spring of 2019. (Photo by Clint Henderson/The Points Guy)