Nonstop Flights Between Alaska and Russia Are Coming Back This Summer 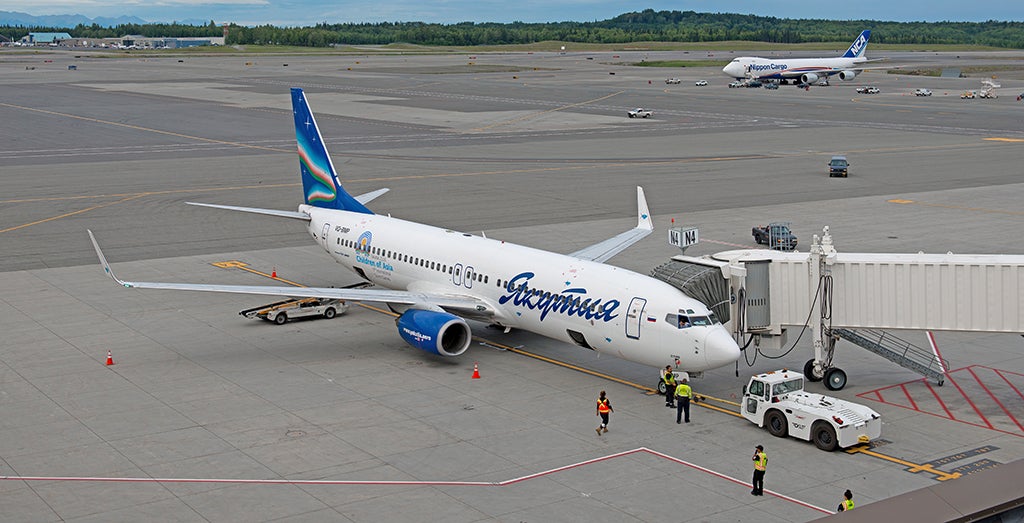 Nonstop Flights Between Alaska and Russia Are Coming Back This Summer
This post contains references to products from one or more of our advertisers. We may receive compensation when you click on links to those products. Terms apply to the offers listed on this page. For an explanation of our Advertising Policy, visit this page.

The United States and Russia are very close. No, this isn't the setup of a political joke — they really are. Less than two and a half miles, in fact, between the US island of Little Diomede and the Russian island of Big Diomede, in the Bering Strait off the western coast of Alaska. At the peak of winter, if the sea ice is thick enough and if you have the right permits, you may even be able to walk between the islands. That's kind of like what the very first Americans did, when they walked from Asia to America over the land exposed by the dropping sea levels during the last Ice Age. Today, you can move between Alaska and Russia far more easily than that.

This summer Air Russia will launch, for the seventh consecutive year, direct seasonal flights between Anchorage, Alaska, and Petropavlovsk -Kamchatsky, the capital of Russia’s remote Kamchatka peninsula. Russian carrier Yakutia Airlines actually operates the flight — Air Russia is a brand of InterPacific Aviation and Marketing, a travel distributor based in Seattle that sells the Alaska to Siberia flights.

On this route, Yakutia uses a Boeing 737-800 in a two-class configuration, featuring 8 business and 162 economy class seats. Flights run once weekly between July 16 and September 3. It's not exactly cheap at $1,150 roundtrip from Anchorage (ANC) to Petropavlovsk (PKC), but there aren't many more ways of getting to Kamchatka from Alaska. If you're thinking of earning of redeeming frequent flyer miles on Yakutia, well, it isn't going to happen — the airline does have a loyalty program, but it's not linked to any others, and the English-language version of the page explaining it is pretty much incomprehensible.

Although the segment between Anchorage and Petropavlovsk - Kamchatsky and vice versa is by far the most popular with travelers, the route continues to the Siberian city of Yakutsk (known for being one of the coldest places on Earth), where Yakutia Airlines is based. Travelers wishing to travel further into Russia from PKC have a choice of domestic connections to cities such as Vladivostok, Moscow and St. Petersburg.

But exactly who flies between these two destinations?

"50 to 60% of our passengers are American outdoorsmen, people that visit Kamchatka because of the great fly-fishing or hunting opportunities there," Mark Dudley, Air Russia's regional director for North America, said.

The Kamchatka peninsula is a natural wonderland, known for its snow-capped volcanoes, pristine salmon-packed rivers, and exuberant wildlife with an abundance of bears, whales and other wild animals that thrive in this unspoiled wilderness.

Another 30% of passengers are either Russian citizens or Americans of Russian ancestry, Dudley said, and the rest are mostly adventurous travelers drawn to this route because of the chance to explore a truly off-the-beaten path destination.

Tickets can be booked through Air Russia’s and Yakutia Airlines’ websites as well as through all major GDS systems and some tour operators. "We are starting to see some interest from the cruise industry too, as a hop to Kamchatka can be a truly original way to prolong an Alaskan vacation," Dudley said.

Success on this route has prompted InterPacific Aviation and Marketing, whose parent company is Japanese, to launch new flights to Kamchatka from Japan. These will also be operated by Yakutia Airlines, although for now on a rather more modest scale — two flights per week over a two-week period.

Dudley isn't worried, he said, about the geopolitical tensions and deteriorating relations between the US and Russia. There hasn’t been any drop in the number of reservations so far this season, he said.

To be fair, although Yakutia Airlines is the only scheduled operator, this is not the only air link between Alaska and Russia. Bering Air offers charter flights between Nome, at the westernmost tip of Alaska, and Chukotka, Russia’s Easternmost region. This however, remains a rather local operation, with the occasional on-demand flights operated by small 19-seat turboprop aircraft. Alaska Airlines flew from Anchorage to several destinations in Russia's Far East from 1991 to 1998, but no other year-round regular service between the two regions exists.

History buffs may have noted that this flight roughly follows the Alaska to Siberia air corridor (aka "ALSIB"), a supply route that played a key role during WW2, delivering tons of American supplies to the Soviet Union for use on Europe’s Eastern Front. This historical episode was recreated in 2015, when two restored WW2-era C-47 aircraft flew all the way from Montana to Moscow, where they were exhibited at the MAKS Air Show.

A previous version of this story stated incorrectly that Mark Dudley is the CEO of Air Russia; he is in fact its regional director for North America. The reference has been corrected.