This Oregon Town May Be the Ultimate AvGeek Vacation Spot 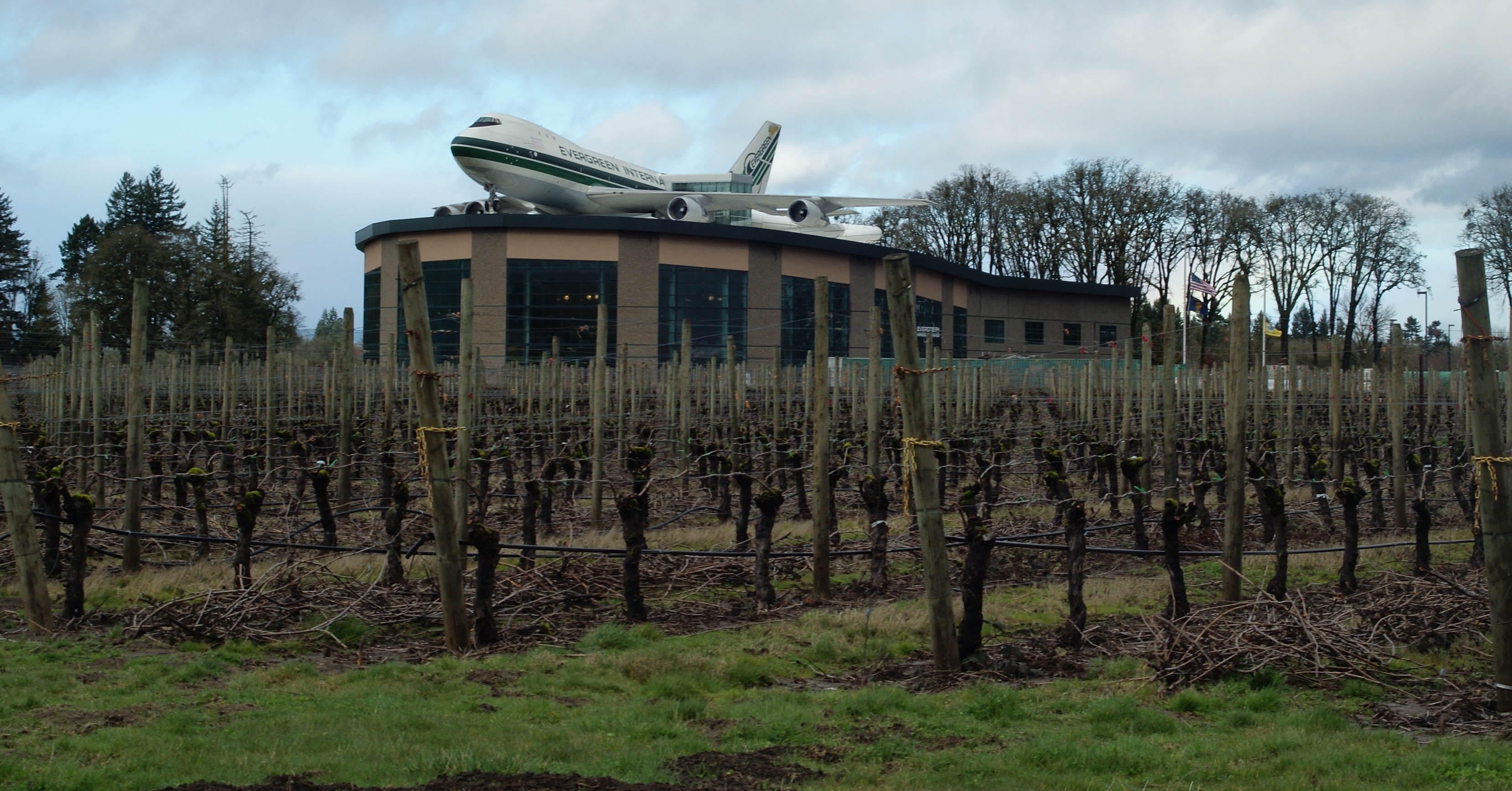 This Oregon Town May Be the Ultimate AvGeek Vacation Spot
This post contains references to products from one or more of our advertisers. We may receive compensation when you click on links to those products. Terms apply to the offers listed on this page. For an explanation of our Advertising Policy, visit this page.

If baseball's field of dreams is in an Iowa cornfield, aviation's is among a vineyard 40 miles southeast of Portland, Oregon. It's here in McMinnville that you'll find a world-class air and space museum that's home to the Hughes H-4 Hercules, aka The Spruce Goose, as well as the incredible aviation themed Wings and Waves indoor waterpark.

McMinnville was the home of Evergreen International Aviation, an aviation services company which operated from 1960 to 2013, before going bankrupt in 2014. Nevertheless, it left behind quite an impressive legacy in an otherwise sleepy town in northwest Oregon. In the early 1990s, the Evergreen Aviation & Space Museum began with a small collection of aircraft owned by Evergreen founder Delford Smith, but it soon won a bid to become the new home of the Spruce Goose once its owners lost the lease to its previous space in Long Beach, California.

The giant aircraft, the largest to have ever flown, was disassembled and transported to a purpose-built museum in McMinnville (an even larger aircraft was recently constructed, but it hasn't yet flown at the time of this writing). There, it underwent an eight-year restoration before becoming the centerpiece of the museum.

Other notable aircraft in the museum's collection include:

In 2006, the museum expanded to include an equally large space museum that houses numerous American and Russian artifacts. In between the two buildings is an IMAX theater that primarily shows aviation- and space-related films. There are also quite a few aircraft on display outside the museum. And just in case you didn't get the point, there's an old Evergreen Aviation 747 parked on the lawn in front of the museum.

We took a tour of the Spruce Goose, and where I had a chance to have my picture taken in the pilot's seat of this monster. But even more fascinating were some facts that the museum's guide was able to share. For example, several old beach balls were found in the floats of the plane during its restoration, which were put there to provide backup buoyancy in case of a rupture. I was also told that during the plane's only flight, which lasted just about 30 seconds, occupants reported hearing several loud popping and cracking noises coming from the tail, and there were even some pieces that broke off inside the aircraft.

To me, this is the most likely explanation for the mystery of why Howard Hughes never attempted to fly it again. Finally, several experts on the aircraft were quick to point out that Hughes himself hated the Hercules's nickname "Spruce Goose," and there was actually very little spruce used to build it.

The Wings and Waves Waterpark

Although any self-respecting AvGeek would love to spend an entire day exploring the museum, children and less enthusiastic family members will gravitate to the aviation-themed Wings and Waves Waterpark next door. The centerpiece of the waterpark is another Evergreen Aviation 747 that's placed on its roof, perched as if it's just about to take off. Visitors can actually climb an enclosed set of stairs that rises into the former Pan-Am jumbo jet, only to exit the aircraft in one of four fantastic water slides.

Other attractions include a wave pool, a hot tub, and several smaller slides and play areas that are suited to younger children. Between the models of the space shuttle, fighter airplanes and a helicopter that dumps water everywhere, it's impossible not to get caught up in the AvGeek fun. And because the whole park is indoors, we were able to enjoy it in the middle of February, just as the town received a light dusting of snow.

Visitors over 42" tall are charged $29, while admission for those under 42" is $20. A non-swimmer day pass is just $10. We were able to use a Groupon for $87 for four tickets, which was a significant savings.

As vacation destinations go, McMinnville is pretty easy to get to. Nearly every airline in the United States offers frequent service to Portland International Airport, about 50 miles away. Nevertheless, you should plan on at least an hour and a half to drive there, as there isn't a highway connecting it to McMinnville. We were happy to fly into Portland on Southwest using the Companion Passes my wife and I both have to book tickets for our children.

If you're looking a place in McMinnville to use your points from a major hotel program, then you've picked the wrong destination. This town of 34,000 is the home of many nice independent hotels and bed and breakfasts, but the Comfort Inn and Suites near the museum and waterpark is the only property that's part of a major loyalty program. Award stays there cost 20,000 - 25,000 Choice points per night.

Instead, we redeemed our Chase Ultimate Rewards points to stay at the family-friendly Red Lion hotel nearby. It has an indoor pool, free breakfast and plenty of rooms with two beds and a fold-out sofa. Using my Sapphire Reserve card, we received 1.5 cents per point when redeeming our points through the Chase Ultimate Rewards Travel Center. I prefer to use my points this way rather than paying cash.

Beyond the museum and the waterpark, McMinnville also happens to be a charming town to visit. It has a cute main street with plenty of wine tasting rooms, microbreweries and independent local shops and restaurants. Just outside of town, you can tour the wineries, take a bicycle ride or visit a park. During our most recent stay, we took a scenic hike through the temperate rain forests of Tice Park, just north of the city.

This year's trip was our second family vacation to McMinnville and we'll definitely be back. After having another chance to explore the Spruce Goose, learn about aerospace and enjoy a day at the waterpark, I'm now convinced that McMinnville is the ultimate AvGeek destination — especially for history buffs.

Related stories
Legislation that could gut credit card rewards set to move through Congress
Would you stay at 1 of these 8 haunted hotels this Halloween?
Southwest winter flash sale: Get one-way flights for as low as $29
You can currently buy points and miles with up to a 100% bonus — but should you?
Featured image by SONY DSC