Martha Stewart Is Expanding Her Empire to a Major Cruise Line 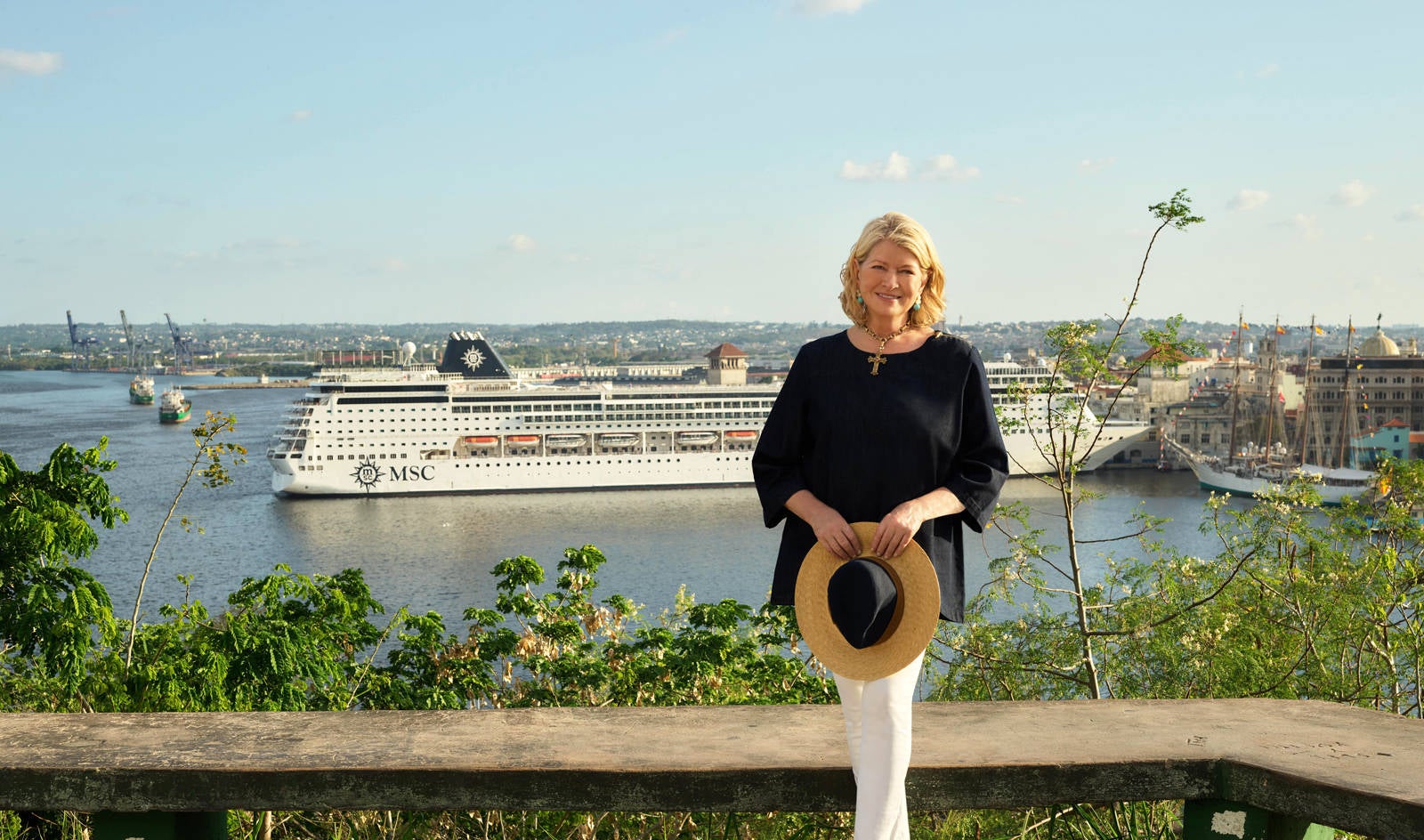 Martha Stewart Is Expanding Her Empire to a Major Cruise Line
This post contains references to products from one or more of our advertisers. We may receive compensation when you click on links to those products. Terms apply to the offers listed on this page. For an explanation of our Advertising Policy, visit this page.

Add cruising to the list of good things in the Martha Stewart universe.

The 77-year-old lifestyle guru is putting her stamp of approval on the fast-growing travel sector by partnering with one of the industry’s biggest players, MSC Cruises.

Announced on Wednesday morning, the alliance will bring Stewart-branded shore excursions to the line’s North America-based ships starting in June. Stewart will also design holiday menus for MSC Cruises vessels sailing out of North America, as well as surprise gift packages that can be delivered to passenger cabins.

“Really excited,” is how Stewart described her feelings about the deal during an exclusive, pre-announcement interview with The Points Guy and a handful of other media outlets at her New York City offices. “It’s a lot of fun to create [new] experiences.”

Priced from $115 to $199 per adult, the new shore excursions will be intimate, one-of-a-kind outings that tap Stewart’s passions for food, crafts and gardens. Nine initial offerings will include a food and culture walking tour of San Juan, Puerto Rico with five stops featuring local cuisine and drinks. Another tour in the Cayman Islands will feature a horseback ride along a beach followed by a vegan tasting experience with the chef at a celebrated local restaurant.

In response to a question from The Points Guy, Stewart said she wasn’t just agreeing to have her name pasted on the new tours.

“I can’t do that,” she said. “This is licensing a personality’s suggestions to a cruise ship. But the suggestions are actual, valid suggestions [from me], tested and tried-and-true.”

With the tours, “We want to send people where we would go ourselves, or where we have been ourselves and know,” she said. “It’s authentic. Put that word in there: authentic.”

Stewart said she had just returned from a scouting mission to Grand Cayman during which she tested out the horseback ride for herself.

“It was gorgeous,” she said of the location, which is within Grand Cayman’s Barker’s National Park.

Stewart also promised authenticity with the on-board holiday menus and gift packages that will carry her name. She says she and her team are carefully curating them.

The menus, which are still being created, will appear at dinnertime in the main restaurants of MSC Cruises ships on Easter, Thanksgiving, Hanukkah, Christmas and New Year’s Eve. They’ll also be served at the private restaurants in the exclusive MSC Yacht Club suite areas on MSC Cruises ships.

And the gift packages — designed for passengers celebrating special occasions such as birthdays, honeymoons and anniversaries — will be available for purchase before or during a cruise. There will be three options, priced at $10, $30 and $89. The basic option, called the Martha Stewart Delightful Surprise, will include a personalized letter from Stewart, a Stewart-designed dessert and a recipe card. Both the more expensive options add a bottle of wine, with the top option incorporating a photo taken by a ship photographer; a Stewart-selected picture frame; and a Stewart and MSC Cruises co-branded canvas beach tote bag.

Samples of the desserts to be included in the gift packages were arranged on a table where Stewart met with The Points Guy during the interview. They included chewy, chocolate-gingerbread cookies and lavender-hued, white chocolate ganache-covered brownie cupcakes finished with sugared pansies.

“These are our recipes,” she noted. “The cookies are from [our] cookie book and the chocolate cupcake, there, with the pansies on top [is] from our baking show on PBS.”

The new partnership comes as MSC Cruises focuses more on drawing North American passengers. A giant of cruising in Europe, the Switzerland-based company traditionally has drawn a large percentage of its customers from the continent. But it increasingly sees its path to growth as being centered around North America and its market.

The company has been rapidly expanding its deployment in North America in recent years and now has two of its 16 ships based in Miami year-round, with two more sailing out of the city seasonally.

Bringing an iconic American brand such as Martha Stewart to MSC Cruises ships based in North America makes sense given the North American push, the EVP and chief operating officer of the line’s US division, Ken Muskat, suggested at the event. Plus, Stewart’s core values match up nicely with MSC Cruises tentpoles such as offering enriching experiences to passengers.

“She’s obviously somebody who likes to experience new things herself, and then figure out how to teach other people about them.” Muskat noted. “Her passion for discovery and exploration is something that fits perfectly with our brand.”

The deal with Martha Stewart is just the latest between MSC Cruises and a brand that is well-known to North Americans. The line has also pursued partnerships recently with Japanese-American celebrity chef Roy Yamaguchi to develop shipboard restaurants and North American entertainment powerhouse Cirque du Soleil to create shipboard shows.

Meanwhile, Stewart and Muskat both hinted there was more to come out of the new partnership.

“We’re just starting,” Stewart said. “This is just the beginning.”