LGA's security system has caused problems for some despite overall upgrade

Articles
Caroline Tanner covers news and travel for TPG. She is a journalism graduate of Mizzou and Northwestern.
Follow
March 07, 2022
•
8 min read 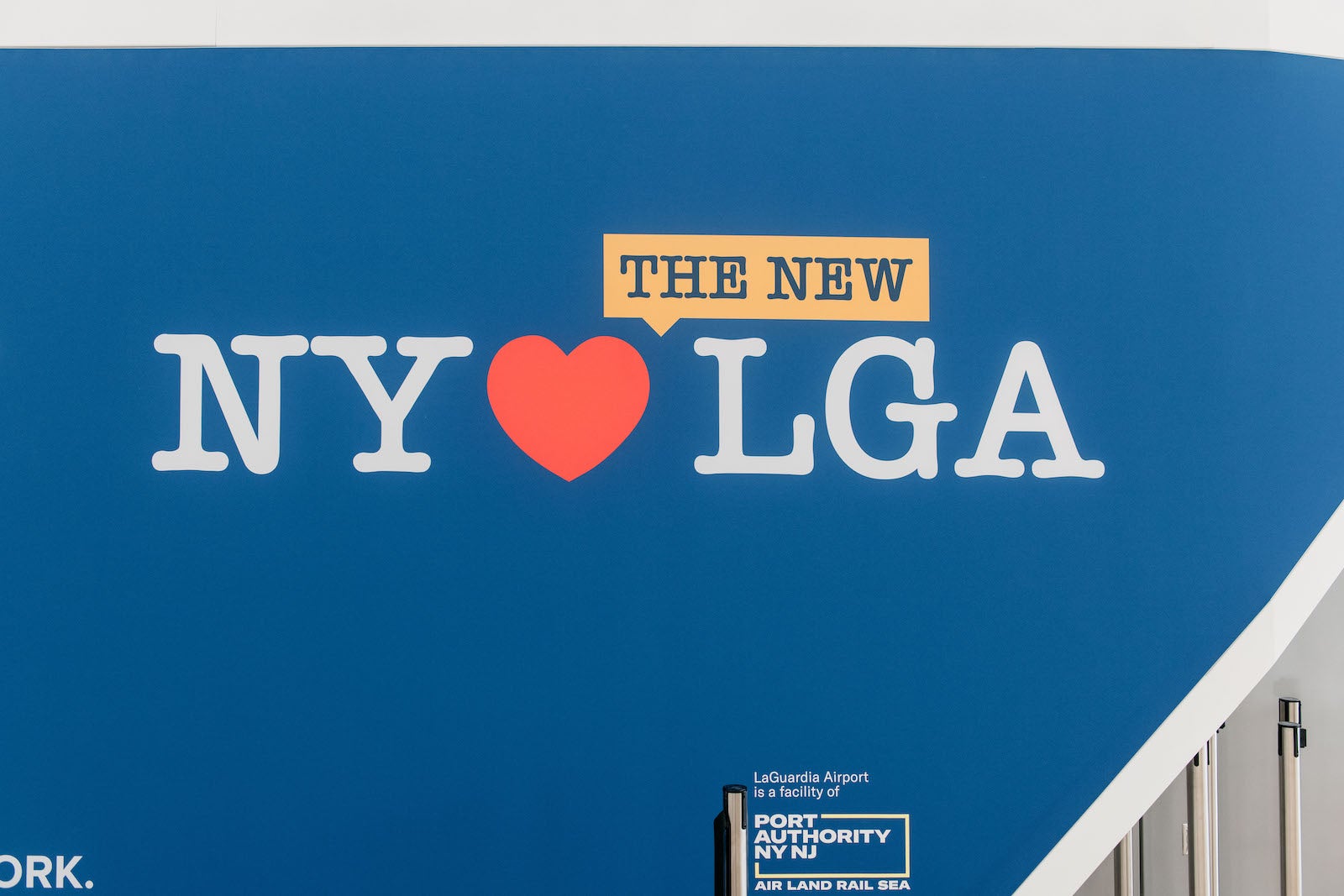 If you've traveled through Terminal B at LaGuardia Airport (LGA) since its $4 billion renovations, you may have used the automatic TSA security bins, as I did a week ago, traveling back from Massachusetts from a ski trip you can read about on TPG soon.

Recent experiences -- by both TPG staffers and readers -- offered mixed reviews on the revamped Transportation and Security Administration security line screening process. However, there's no denying that the terminal itself is a major, major improvement.

ICYMI, automated security bins have been at LGA Terminal B since June 2020

Although Terminal B renovations were not complete until last month, the current TSA screening technology has been in place since the Terminal B Arrivals and Departures Hall opened in June 2020. However, the bins seemed to have gone under the radar thus far.

"The security screening area is more than three times the size of the security area in the Central Terminal Building that the new terminal replaces," a spokesperson for Port Authority said via email. "And it features the ability to load five bins simultaneously, which is a big improvement."

As for the rest of the terminal, renovations were completed last month, per an official unveiling by LaGuardia Gateway Partners, Port Authority of New York and New Jersey and relevant government officials, marking the completion of a $4 billion portion of a total $8 billion airport-wide renovation project, designed to "provide a brand new passenger experience for everyone traveling through Terminal B, easing connections and creating lasting impressions."

As I said, I think we can all agree the new Terminal B is much improved, a vibe which I felt immediately upon first entering the terminal. Personally, I was more than pleasantly surprised at the new food options, especially one that provided the opportunity to get in my daily green juice, a habit usually disrupted by the uncertainty of traveling.

However, as much joy as that $16.22 Green Leaf green juice brought me, I was already miffed by the time I discovered the juice thanks to my experience just minutes before as I made my way through the terminal's "new automated bin sequencing and retrieval system."

I'm not the only one, either.

Reviews of the automated security bins are mixed, coupled with low awareness

Despite the bins being in existence for nearly two years, only one TPG staffer had something to say about them. Here's what TPG director of content Nick Ewen said about his recent experience:

"I was passing through Terminal B security around 6:30 p.m. I have TSA PreCheck, and the line was only a few people deep. However, once I placed my carry-on bags in the provided bins and went through the metal detector, I waited for roughly 10 minutes (along with a dozen or so other travelers) for the bags to come through.

The first issue was that my two bins were separated -- by at least eight others. So when my roll-aboard suitcase finally came out, I had to wait for several other passengers' items to come through before my laptop bag was available for me to grab. In addition, the automatic belt meant that, even after the bins were "cleared" by security, they still sat behind the plexiglass.

This was a frustrating delay, as I could see my already-screened bag just sitting there, waiting to be pushed down the ramp so I could be on my way. All told, I felt that these machines, which must have a hefty price tag, not only didn't fulfill their goal of speeding up the security process. They actually slowed it down."

As for me, I was unaware of these bins until two weeks ago when my brand new coat ended up below a bin. I could see the coat just sitting there, being damaged in real-time, with TSA officers in zero hurry to address it. After a few minutes, an employee told me they would have to place the coat through the security conveyor belt a second time since it fell out of the bin. Then, that same TSA employee handed it to me, only for me to notice fresh marks and rips on my vegan leather coat.

Among TPG readers who responded to a request for this story in the TPG Facebook Lounge, few people indicated awareness of the updated security process, and reviews varied upon those who were familiar, including the below readers from the lounge who found the bins to be "confusing" and "slow as hell."

Even so, readers agreed with the general consensus about the terminal's upgrade being long overdue, albeit still somewhat unfamiliar.

"It's beautiful, and I think it's a massive improvement from the passenger experience perspective," said TPG senior reporter Zach Griff. "The only downside is that it takes much longer to get from the curb to the gate with the new terminal. Other than that, big improvement."

Tips to speed you through security

Whether you're going through security at LGA or another airport, there are still steps you can take to decrease the likelihood of a frustrating experience.

As previously reported, TSA PreCheck is one tool that can help you speed through the TSA security line faster. For just $85, you can skip the oftentimes arduous process of removing your shoes, food, laptop, liquids, belt or light jacket at participating airports, including LGA.

Another expedited security program to consider is Global Entry, which is an expedited customs screening program you can use when you return to the U.S. from abroad. It also includes a membership to TSA PreCheck.

Read more about Global Entry vs. TSA PreCheck in our guide here.

If you primarily fly from U.S. airports, I would also highly recommend getting Clear, which for $179 annually, maximizes the chances of speeding through security at any entry point, as Clear enables you to skip the two-step security process biometrically by verifying your identity in a Clear-only line at more than 40 airports.

Check out our TSA PreCheck vs. Clear guide here.

If you have Clear and also have TSA PreCheck, you are escorted to the front of the TSA PreCheck line for your final security screening. Just note that Terminal B at LGA does not have Clear, but terminals C and D do.

Also, several credit cards offer up to $100 for reimbursement for the fees associated with Global Entry or TSA PreCheck, in some cases fully covering the cost of signing up.

If you're like me and prefer to stress out about cramming everything you need into a carry-on suitcase rather than check a bag, remember that's always an option. One less bag equals less time waiting for the said bag to go through security, with the potential for fewer issues -- in theory at least. Lost bags are a whole other matter.

Despite the headaches for some caused by the updated security system at LGA's Terminal B, the terminal is a major upgrade overall. I look forward to not dreading flying out of LGA, thanks to its cleanliness, room to spread out and expansive food options.

Excluding the damage that resulted to my coat, I went through security that day, on a Monday around 4:30 p.m., in less than 10 minutes, most of which was spent waiting for the coat.

The next time I know I'll be flying out of LGA, I'll reconsider my coat choice.

Our points-obsessed staff uses a plethora of credit cards on a daily basis. If anyone on our team wouldn’t recommend it to a friend or a family member, we wouldn’t recommend it on The Points Guy either. Our opinions are our own, and have not been reviewed, approved, or endorsed by our advertising partners.
See all best card offers
Related stories
News
NASA unveils futuristic plane we'd love to fly — someday
Guide
The best credit cards for concert tickets and VIP access
Guide
Quick Points: Use Flying Blue's hidden calendar search tool to find better award tickets
Guide
Amex credit card showdown: Blue Cash Preferred vs. Blue Cash Everyday