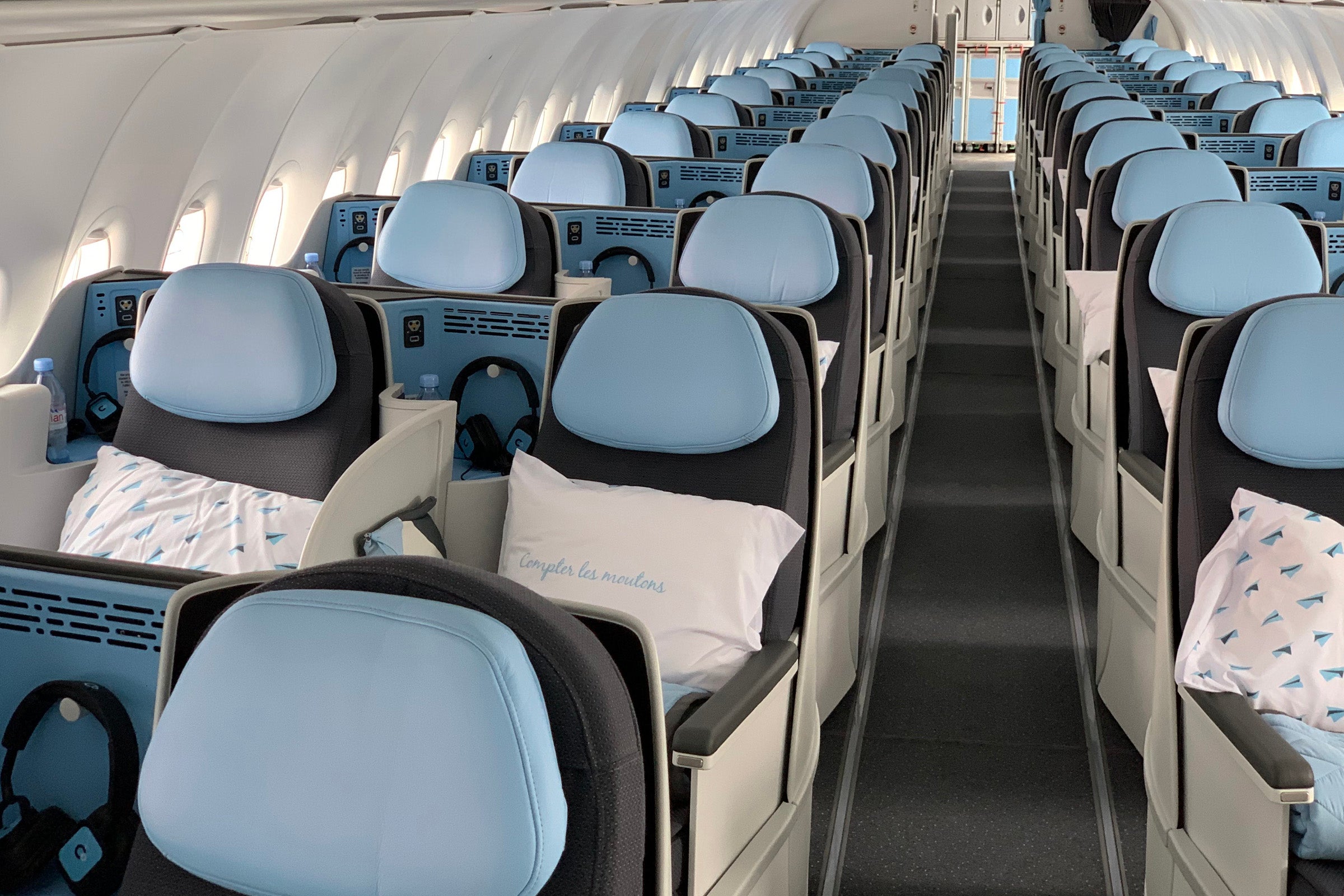 Take a Tour of La Compagnie's All-Business Airbus A321LR
This post contains references to products from one or more of our advertisers. We may receive compensation when you click on links to those products. Terms apply to the offers listed on this page. For an explanation of our Advertising Policy, visit this page.

La Compagnie has made a name for itself with unbelievable (and very frequent) business-class sales between the East Coast and Europe. But, until a few weeks ago, the carrier's product was lackluster — to say the least.

At the end of May, one of the carrier's daily round-trips between Newark (EWR) and Paris (ORY) got a massive upgrade, in the form of a brand-new Airbus A321LR with true lie-flat seats, on-demand entertainment and speedy ViaSat Wi-Fi. I was able to take a tour of the aircraft on the ground at the Paris Air Show. Here's what I saw:

This is the first A321 with an exclusively business-class configuration — 76 seats in total, in a 2-2 arrangement.

With a total of 19 rows, it is a very large cabin.

There are two lavatories at the rear of the cabin, along with one upfront, just behind the cockpit.

Most rows are more or less identical, but seats at row 9 have a bit of extra room due to the over-wing exit. Rows 15 and 16 are missing one window.

Passengers at the window seats will need to step over their neighbor to get out; while direct aisle access would certainly have been a plus, it's not practical for a single-aisle plane.

Forward storage is limited to a shelf beneath the 15.6-inch display, in addition to a compartment beneath the ottoman that's large enough to accommodate a small bag.

You can store loose items to the side of the seat, which is also where you'll find noise-canceling headphones, a headphone connector and USB charging port.

My only real complaint is that the windows are obstructed by (what I imagine was well-intentioned) art. Fortunately, it's only temporary — some windows are already clear, and unobstructed views are coming to the rest soon!

If you've been avoiding La Compagnie because of the carrier's dated Boeing 757 and angle-flat seats, you now have a really great reason to fly. While this is hardly an industry-leading product, the all-business cabin is fun and unique, and the carrier's sale fares cannot be beat.

La Compagnie has just one Airbus A321LR at this point, though the carrier expects to take delivery of a second in September, at which point it'll retire one of its two Boeing 757s. Both lie-flat A321s should be used for both daily Newark-Paris flights shortly after, with an angle-flat 757 remaining on the sole Newark-Nice flight, which may be extended beyond the fall.

Do note that substitutions are possible in the meantime, though, and it's not yet clear whether or not the company will re-accommodate passengers facing a Boeing 757 swap.