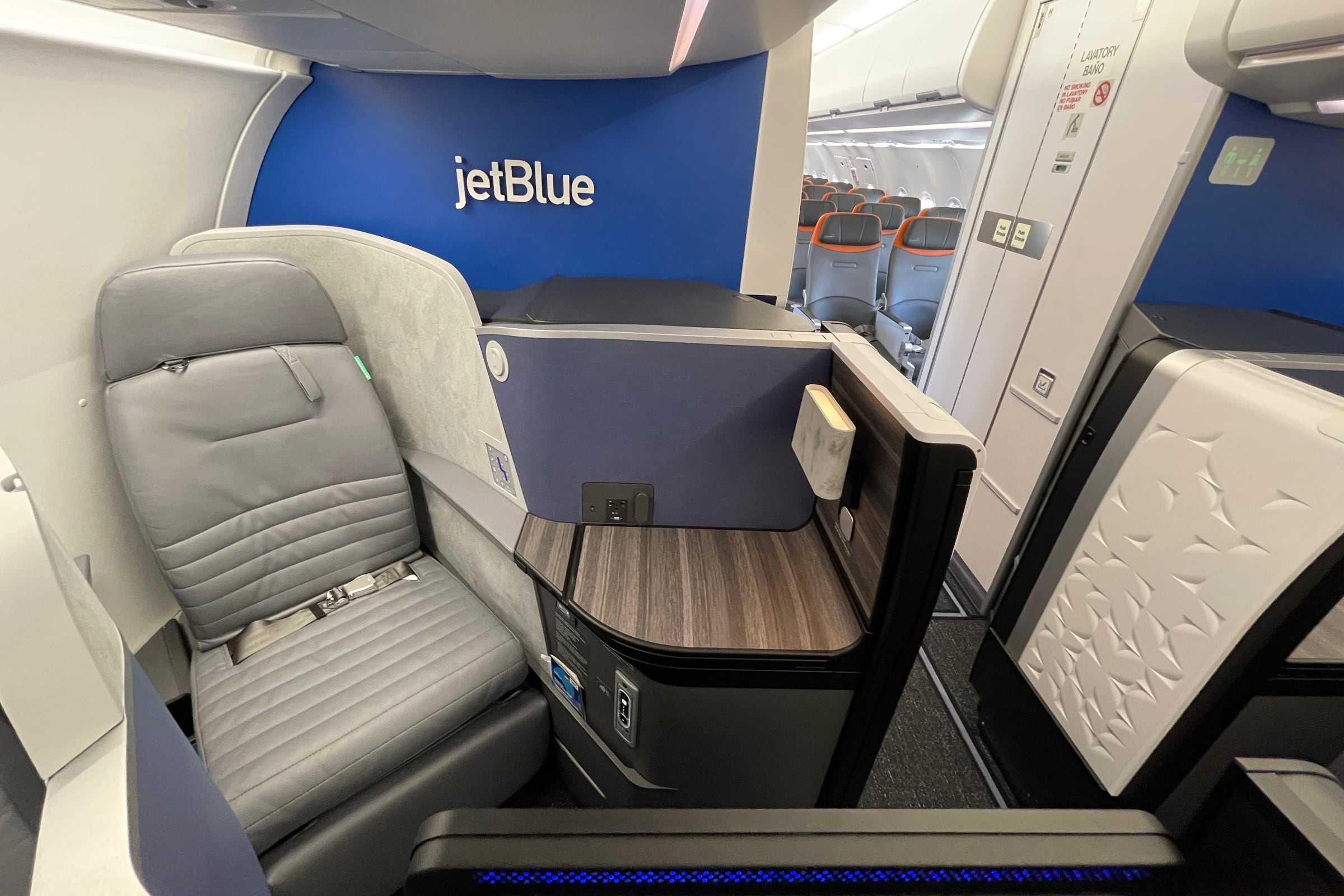 If all goes to plan, JetBlue flyers traveling on select flights between New York-JFK and Los Angeles will soon have a chance to experience the carrier's next-generation Airbus plane — the A321neo — offering JetBlue's new-and-improved Mint business class, Even More Space coach and a large "Core" economy cabin.

Of course, Mint is the real star of the show, but JetBlue's economy product has seen some notable upgrades, too. The airline is rolling out two slightly different neo models — one, the regionally configured A321LD, will offer 16 Mint suites, while the upcoming A321LR will have 24, and will be used for flights between the U.S. and Europe.

You're likely to have a good experience regardless of where you land, but as with all airliners, some seats and suites are definitely more appealing than others. Let's see which you should pick, whether you're traveling in Mint, core or Even More Space.

Of course, Mint is the real star of the show. This A321neo version offers eight rows of JetBlue suites, arranged in a spacious and private 1-1 configuration.

Everyone gets direct access to the aisle, and a sliding door for extra privacy — other passengers can see into your suite as they walk by, but the door definitely helps to create a more peaceful environment, especially with the seat in bed mode.

JetBlue's biz product has been completely redesigned. You'll find a more comfortable seat and additional storage, plus a 17-inch HD display in Mint suites and a 22-inch screen in the carrier's slightly elevated Mint Studios, available in the first row.

So, where should you sit? If you can score a Mint Studio, that's definitely your best pick. These bulkhead suites have significantly more space, a special seat so a friend can join you for meals and two full windows. They'll also likely come along with an additional charge.

Studio passengers also get extra storage, including a bulkhead closet, along with larger 22-inch displays.

Behind the studios, you'll find seven rows of "regular" suites. They're still quite posh, and include sliding doors and a fair amount of space. They're all more or less identical, with the exception of the final row, which might be my last pick.

At first, suites in row 8 appear to be a solid pick, since they do feel a bit more spacious — there are a few inches of open space behind, rather than another seat.

The challenge is that 8A and 8F are located just in front of the economy cabin — the lavatory and self-serve snack and beverage bar, to be more specific. There's no curtain dividing the two, so I'd expect a bit of traffic, and jealous looks from economy flyers coming up to sneak a peek as they grab themselves a drink.

Also of note, suites at row 8 only include one window instead of two — you'll probably have it closed most of the flight to reduce screen glare anyway, but it's still worth pointing out.

With all passengers boarding through the front of the plane at most airports, you'll be getting up close and personal with JetBlue's latest business-class product, even if you're seated in coach. In other words, if you're feeling some buyer's remorse after passing up on a great Mint fare when you book, it'll really hit after you walk past 8A.

If you're traveling on a coach ticket, Even More Space is definitely where it's at — you'll get at least three inches of additional legroom, and even more in the exit and bulkhead rows. Mosaic elites can request Even More Space seats free of charge at the airport, if there are still any left to reserve.

Normally I might suggest that bulkhead, but that's not the case here, as I'll explain in a moment. Instead, I'd go with seats in row 14, the second emergency exit row. You'll have enough legroom to get in and out of the window seat without asking your fellow travelers to move, and plenty of space to stretch out otherwise. Just note that window seats (14A and 14F) don't include armrests.

And, because there's a window exit in the row, you won't have to worry about passengers in front reclining into your space. (Side note: don't pick a seat in row 13.)

From there, I'd pick any other other Even More Space seat, except for the bulkhead row or row 12 — seats there don't recline because of the exit in row 13.

So, to summarize, in Even More Space, row 14 is where it's at, along with rows 10 and 11, plus 15, all of which also offer considerable space and full recline.

Normally, I might consider sitting in the bulkhead row, to take advantage of extra legroom — just not on this plane.

While the bulkhead is the place to be in Mint, in the economy cabin, the lavatory and snack bar are positioned just inches away from row 9, making this an especially high-traffic area.

The snack bar is another big concern — chips, candy and drinks available free of charge, so expect a steady stream of passengers coming up for a refreshment, even on shorter flights (where "to-go" items might be especially in-demand).

These bulkhead seats also have slightly reduced width, since the display folds away and down between each seat. Another reason to avoid sitting there.

As a reminder, you'll also want to avoid the first exit row, 13, along with row 12 in front, since seats in both rows don't recline.

Beyond Even More space, you'll find 17 rows of regular economy, which JetBlue calls "Core." The airline offers 32 inches of pitch — an inch of two more than you'll find on most competitors, but less than the 34 inches the carrier once provided in economy.

All seats include on-demand entertainment and power outlets — two per row in Core, compared with three in each Even More Space row.

Regular economy starts at row 16 — while it's perhaps a bit annoying to be just inches away from passengers with extra legroom, they're also a bit less likely to recline their seats all the way, given that they have more space to begin with. Row 16 also has the benefit of having excellent window alignment — passengers in 16A and 16F have almost two full windows to enjoy.

You may want to avoid rows 23 and 24, since there's a missing window. That's not to say you'll have two windows at every other row in economy, but you definitely won't in this row. Personally, I could work with row 24 — the only window you can see in row 23 is blocked slightly by the seat in front, though, and may not be visible at all with 22A or 22F reclined.

I'd also consider avoiding the last row of the cabin, 32. Window alignment is fine, and the seats do recline, but you'll be just steps away from the bathroom, and, like the bulkhead, it's an area where passengers are more likely to gather as they wait for the lav.

Overall, I'd be happy flying in just about any seat on JetBlue's new A321neo — which the exception of the middle, unless I were traveling with family members or friends.

Mint should obviously be your first pick, but you'll generally pay a fair bit more to sit there. JetBlue's fares can be somewhat wonky at times, though — I've noticed some flights where Mint is cheaper than coach on flights to leisure destinations, especially in the Caribbean.

Still, thanks to speedy onboard Wi-Fi, on-demand seat-back entertainment and a fun snack bar/drink fridge, regardless of where you sit, you're likely to enjoy your ride.

Related stories
After 19 months, United Airlines is officially suspending flights at New York's JFK airport — again
17 ways to earn lots of Marriott Bonvoy points
Delta SkyMiles Gold Amex card review: Perfect for casual Delta travelers, now with a 65,000-mile offer
Fast-growing Viking doubles down on adventure cruising with a second expedition cruise ship
Featured image by (Photo by Zach Honig/The Points Guy)
Editorial disclaimer: Opinions expressed here are the author’s alone, not those of any bank, credit card issuer, airline or hotel chain, and have not been reviewed, approved or otherwise endorsed by any of these entities.