Hurricane makes second landfall; Is it safe to travel to Florida? 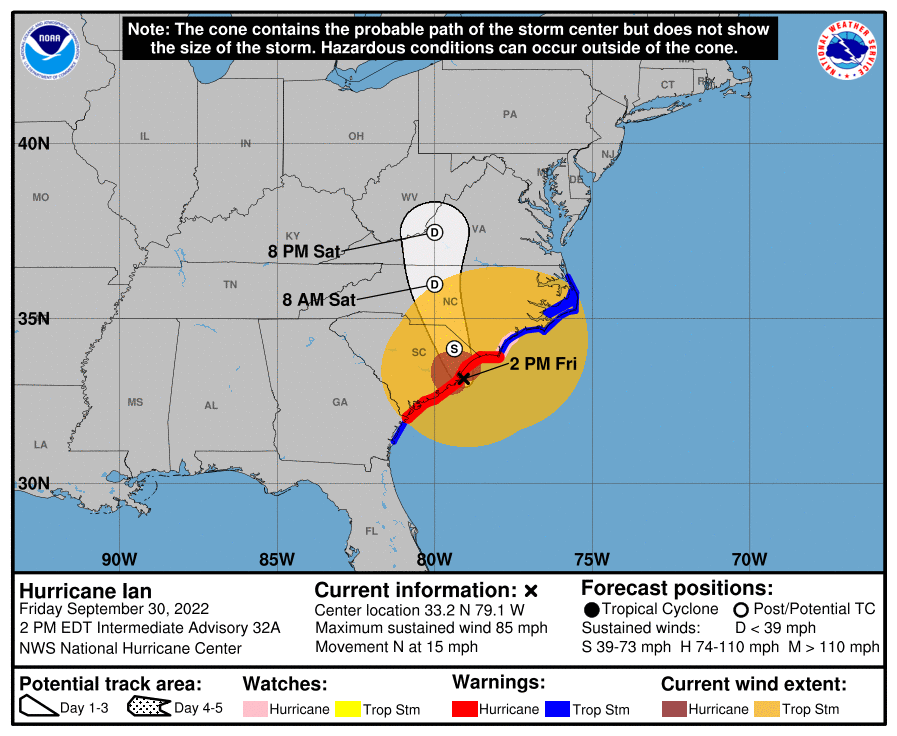 Hurricane Ian continues to disrupt travel as it churns across the Southeast, making its second landfall today in South Carolina as a Category 1 storm at approximately 2:05 p.m. ET, per the National Hurricane Center.

The National Weather Service warns of life-threatening storm surge and hurricane conditions from Georgia to North Carolina this afternoon and evening. Meanwhile, Florida begins the cleanup process two days after Ian plowed into the Gulf Coast as a Category 4 storm. Popular vacation areas like Fort Myers, Naples and Sanibel Island were hard hit, while heavy rain plagued many parts of the state, including Central Florida and parts of Florida's eastern coast.

So what does all of this mean for travel to and through the area? Here's what we know:

Which Florida airports are operating as normal?

Airline service to Florida began to pick up Friday as several of the state’s airports along the storm's path resumed or announced plans to resume operations after closing for Hurricane Ian.

At Orlando International Airport (MCO), the state’s busiest airport in 2021, operations were resuming at noon. However, many of the day's flights are still showing as canceled as delayed — so double-check your flight's status if you are planning to fly in or out in the coming days.

Sarasota Bradenton International Airport (SRQ) reopened to both air carriers and general aviation traffic on Thursday evening, though both American Airlines and Delta Air Lines have canceled all of Friday’s flights. Southwest Airlines plans to operate some flights later Friday. An American Airlines spokesperson told TPG on Thursday that the carrier does not expect to resume operations there until Sunday.

Southwest Florida International Airport (RSW) in Fort Myers is, as of now, formally closed until Wednesday, though that date could be pushed forward — or the closure could be extended. United Airlines on Thursday announced a waiver for its flights to and from RSW until Oct. 11.

Daytona Beach International Airport (DAB) is formally closed until Monday, though that is also subject to change.

About 2,000 flights that were scheduled to depart Florida’s airports were canceled between Tuesday and Thursday afternoon, according to FlightAware data.

Meanwhile, as Ian bolts toward the Southeastern U.S., airports in that region are beginning to announce their own closures.

For example, Charleston International Airport (CHS) formally closed on Friday morning as Ian’s winds exceeded 35 knots at the airport — the threshold for a closure. Boeing, which assembles its 787 at the North Charleston, South Carolina, airport, announced in a tweet on Thursday afternoon that it will suspend operations until Sunday.

Related: What it's like on a cruise ship that is waiting out the storm at sea

The closures have forced five cruise lines to cancel voyages out of the three ports that had been scheduled for Thursday and Friday.

At the same time, two of Florida’s three largest ports — PortMiami and Fort Lauderdale’s Port Everglades — are back open with cruise departures scheduled to take place as normal over the next few days.

The three ports that are closed were the closest to the track that Ian took as it barreled into Florida and crossed the state on Wednesday and Thursday. The U.S. Coast Guard and port workers at the three ports will do damage assessments over the next day or two to determine when they may be safe to reopen.

All Orlando- and Tampa-area theme parks closed temporarily in preparation for Hurricane Ian. Now that Central Florida is on the other side of the storm and moving into the damage assessment and cleanup phase, local theme parks are reopening.

That said, many parks suffered damage, debris, flooding and high water levels. Even as area theme parks do reopen, select attractions and experiences may be unavailable.

Additionally, the parks may not be fully staffed in the coming days, since some staffers live in areas that saw extensive flooding and damage, affecting their ability to come to work.

Related: Here’s what happens when a hurricane comes to Disney World

If you currently have tickets affected by the closures, some parks are giving refunds while others are automatically extending expiration dates. Check with the park you had plans to attend for details.

Is it safe to travel to Florida?

If you have an upcoming trip scheduled to Florida, you'll want to stay abreast of the developments in your specific area, as the fallout from the damage from Hurricane Ian largely depends on the area you are planning on visiting.

The most severely affected areas — including Naples, Fort Myers and the islands of Sanibel and Captiva — are unlikely to resume normal tourist operations for an extended period of time. Representatives of the Collier County Sheriff’s Office and Lee County governments in the area said Thursday that they were focused in the near term on things like recovery efforts and assessing damage to infrastructure like bridges.

Officials from Cape Coral, which is just southeast of Fort Myers, were also urging people to stay off the roads on Thursday.

In Sarasota, which sits between Tampa and Fort Myers Beach, damage assessments were also underway.

"We are in close communication with government officials to understand when it will be completely safe to welcome visitors again to our destination. Efforts are currently underway to ensure roadways are clear and all critical assessments are made," a spokesperson for Visit Sarasota said. "It is our number one priority to continue to provide the enjoyable experiences we are known for, in the safest environment possible."

For travelers who had planned on visiting Disney World, Universal Orlando and other Central Florida locations that have begun a phased reopening, Orlando Police officers said Thursday that they continued to asses flooding in the area.

"The City of Orlando experienced historic flooding throughout the city due to the amount of rain. Many areas of the city experienced water in excess of 14 inches," Orlando Mayor Buddy Dyer and the City of Orlando said in a joint media release on Sept. 29. "This water must recede naturally reiterating the shelter in place precautions as these bodies of water can be electrically charged and/or contain debris."

Visit Orlando, the city's official tourism organization, is urging travelers with plans to visit Orlando to reach out to the organization's Vacation Planners for more information, which can be reached via phone, email or live chat here.

Just about the only city affected that has issued a clear statement indicating it is safe for travelers to resume travel thus far is Tampa.

"Tampa was extraordinarily lucky, and Mayor Jane Castor and other leaders are busy mobilizing resources to help our neighbors south of us," said a spokesperson for the City of Tampa. "Tampa is absolutely safe for tourists."

There, the Tampa Bay Buccaneers will host the Kansas City Chiefs for a home game as scheduled on Sunday night.

Here are some resources for the most up-to-date information on these locations:

In the hardest hit areas, including Naples, Fort Myers Beach and Sanibel, expect reopening efforts to take some time as those communities grapple with immense damage.

However, in Orlando, the main theme parks tourist attractions -- and the infrastructure that supports them -- will be mostly back up and running in the coming days, with a phased opening already underway.

As we look into the weekend, expect the storm's immediate impacts to shift to the Carolinas and potentially beyond.

While the airlines, theme parks, and more have activated more flexible change and cancellation rules, remember that if you booked an trip with a credit card that provides for some built-in trip insurance, look at the terms of those benefits to learn what expenses you may be able to recoup in the event of any non-refundable expenses you may have incurred.

Although this goes without saying, you should not travel to any hurricane-impacted part of a state where local officials are urging residents to stay off the roads. Check back with TPG regularly for the latest information on what is open and what remains closed.

Related stories
What are points and miles worth? TPG’s December 2022 monthly valuations
Capital One Venture X to lose Priority Pass restaurants and spa services as of Jan. 1, 2023
December 2022
Current Hyatt promotions: Bonus points on stays and dining plus double stay credits
Featured image by NOAA
Editorial disclaimer: Opinions expressed here are the author’s alone, not those of any bank, credit card issuer, airline or hotel chain, and have not been reviewed, approved or otherwise endorsed by any of these entities.