How Kim and Trump Will Fly to the Singapore Summit 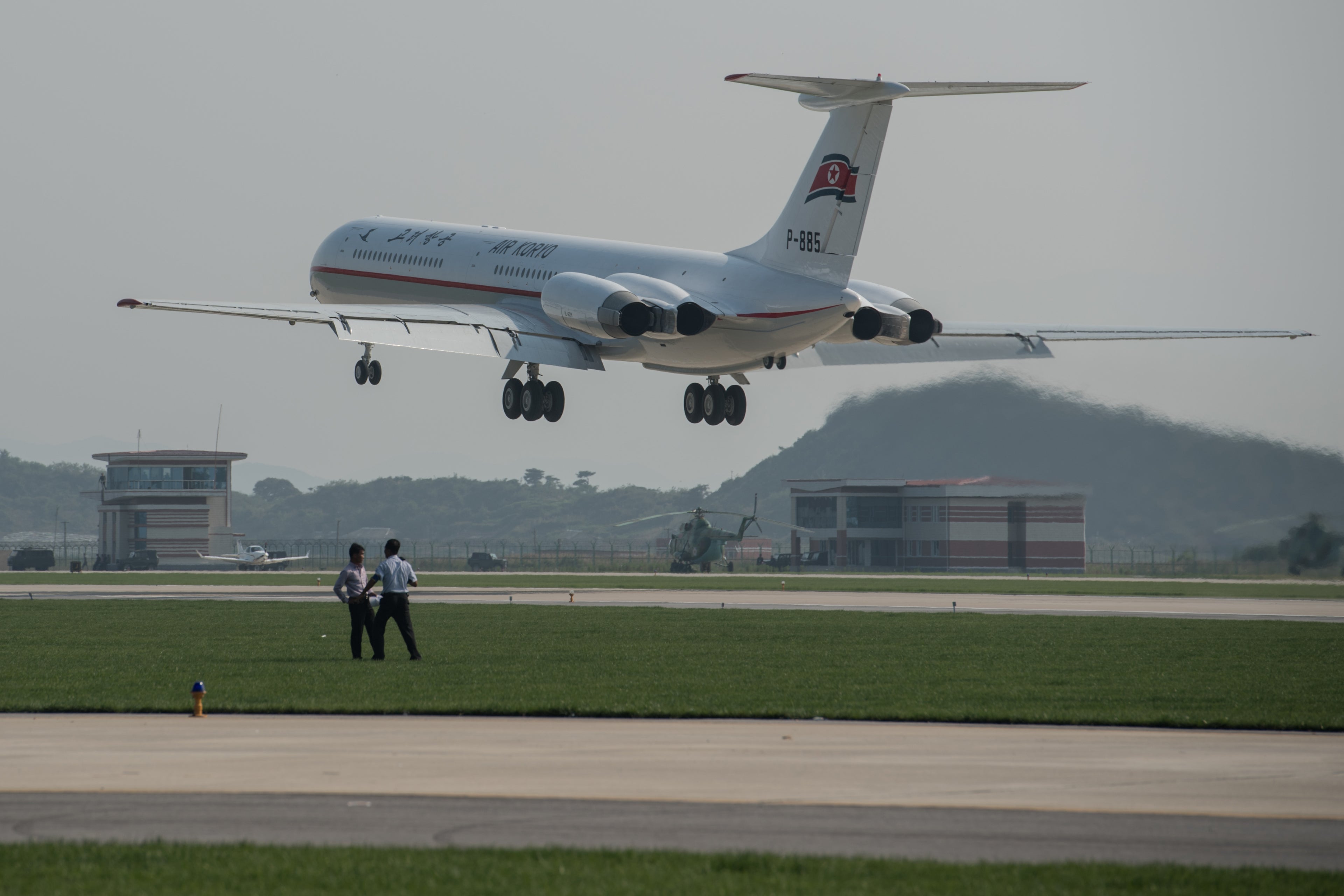 How Kim and Trump Will Fly to the Singapore Summit
This post contains references to products from one or more of our advertisers. We may receive compensation when you click on links to those products. Terms apply to the offers listed on this page. For an explanation of our Advertising Policy, visit this page.

Things seem to be moving pretty fast in the Korean Peninsula. And now, we have a date and place for the summit between US President Donald Trump and North Korean leader Kim Jong Un: Singapore, June 12. What the two leaders might actually discuss, and what could be the outcome of a meeting that until recently was unimaginable, is still a complete unknown. But aviation geeks are salivating over another detail of the summit: How will they get there?

North Korea, AKA The Hermit Kingdom, has been so isolated for decades that its state airline Air Koryo flies a tiny fleet of mostly old planes made in the USSR — including Kim's own VIP jet. Seeing the North Korean leader's Ilyushin 62 in the wild is a lifelong dream for many AvGeeks. And now it looks like they will get their wish in Singapore.

Kim Jong Un’s father and previous leader Kim Jong Il, who was said to suffer from a serious fear of flying, once travelled all the way to Moscow in his armored train. However, land transportation seems to be out of the question this time. It's not as easy to get to Singapore from Pyongyang by train. And in any, case Kim Jong Un does not seem to share his father's concerns about flying.

In fact, as soon as the prospect of a summit being held in a third country became real, media began to question whether North Korea’s aging fleet was up for the job, should Kim Jong Un need to venture far from the Korean Peninsula. The speculation was kind of moot anyway — Kim could easily have made fuel stops along the way. But the Ilyushin Il-62M used by Kim is more than capable of getting to Singapore nonstop.

The North Korean flag carrier has four of the type, with two of them serving as VIP transports. This is in fact one of the aircraft types that tourists can fly on during the aviation-focused tours of North Korea that have become an AvGeek bucket list item. (You can't fly on Kim's actual plane, but Air Koryo will gladly put you on the passenger-configured version.)

In principle, the 2,943 miles that, using a great circle routing, separate Pyongyang (FNJ) from Singapore Changi (SIN) or the Singapore Air Force's nearby base at Paya Lebar are comfortably within the theoretical 6,000 mile range of the Il-62M. And with the lower cabin density and therefore lower weight in a VIP configuration, Kim's plane can totally make it in one go just fine.

Bear in mind that, for decades, Soviet airline Aeroflot operated the Il-62 successfully between Moscow and numerous long-haul destinations, including New York JFK. True, some of these routes, such as Moscow to New York, required an intermediate refueling stop at Shannon, Ireland (SNN), but this is something that, if necessary, the North Korean Il-62M could do as well. After all, the North Korean “Air Force One”, called “Chammae-1” (after a species of hawk), is no stranger to Chinese airports.

And speaking of Air Force One, that's of course what Donald Trump will fly on to get to Singapore. And because he's got a lot more ground to cover than Kim, about 10,000 miles from Joint Base Andrews outside Washington, he's the one who will end up having to make a fuel stop to get there.

It's true that flying nonstop between the East Coast of the United States to SIN is not beyond the realm of possibility. Singapore Airlines used to run the ultra-long-haul, all-business-class, flight to Newark (EWR) with Airbus A340-500 aircraft. It was the longest nonstop in the world, and it's about to make a comeback thanks to the entry into service of more efficient A350-900ULR aircraft. But while it made commercial sense to tout a nonstop flight to New York, there is no point to doing so in Air Force One.

The US Air Force's Boeing VC-25A, the heavily modified Boeing 747 popularly known as “Air Force One” (only when the president is on board, though!) has a range of “just” 7,800 miles. It is, of course, capable of mid-air refueling, but this has never happened while a president is on board, and it is unlikely to be the case this time. It's a procedure not without some risk, and it's there in case of emergency, but in peacetime AF1 does what its civilian 747 brethren do if they need to: It lands to get refueled. Typically this is done at a US airbase in a friendly nation.

This time it will be most likely on US territory, for example at Elmendorf Air Force Base in Alaska, which has a long tradition acting as Air Force One's "gas station" whenever US presidents travel to and from Asia.

In any case, what is sure is that Singapore-based plane spotters are likely to have a field day.

Related stories
Legislation that could gut credit card rewards set to move through Congress
Would you stay at 1 of these 8 haunted hotels this Halloween?
Southwest winter flash sale: Get one-way flights for as low as $29
You can currently buy points and miles with up to a 100% bonus — but should you?
Featured image by AFP/Getty Images