What happens when a hotel sells everything it has?

Articles
Tanner Saunders is a senior hotels reporter for TPG, a corgi dad and chicken fried steak fanatic. Originally from Texas, Tanner now lives in Brooklyn, but you are more likely to find him scouting out your next best home away from home.
Follow
Oct. 07, 2022
•
6 min read 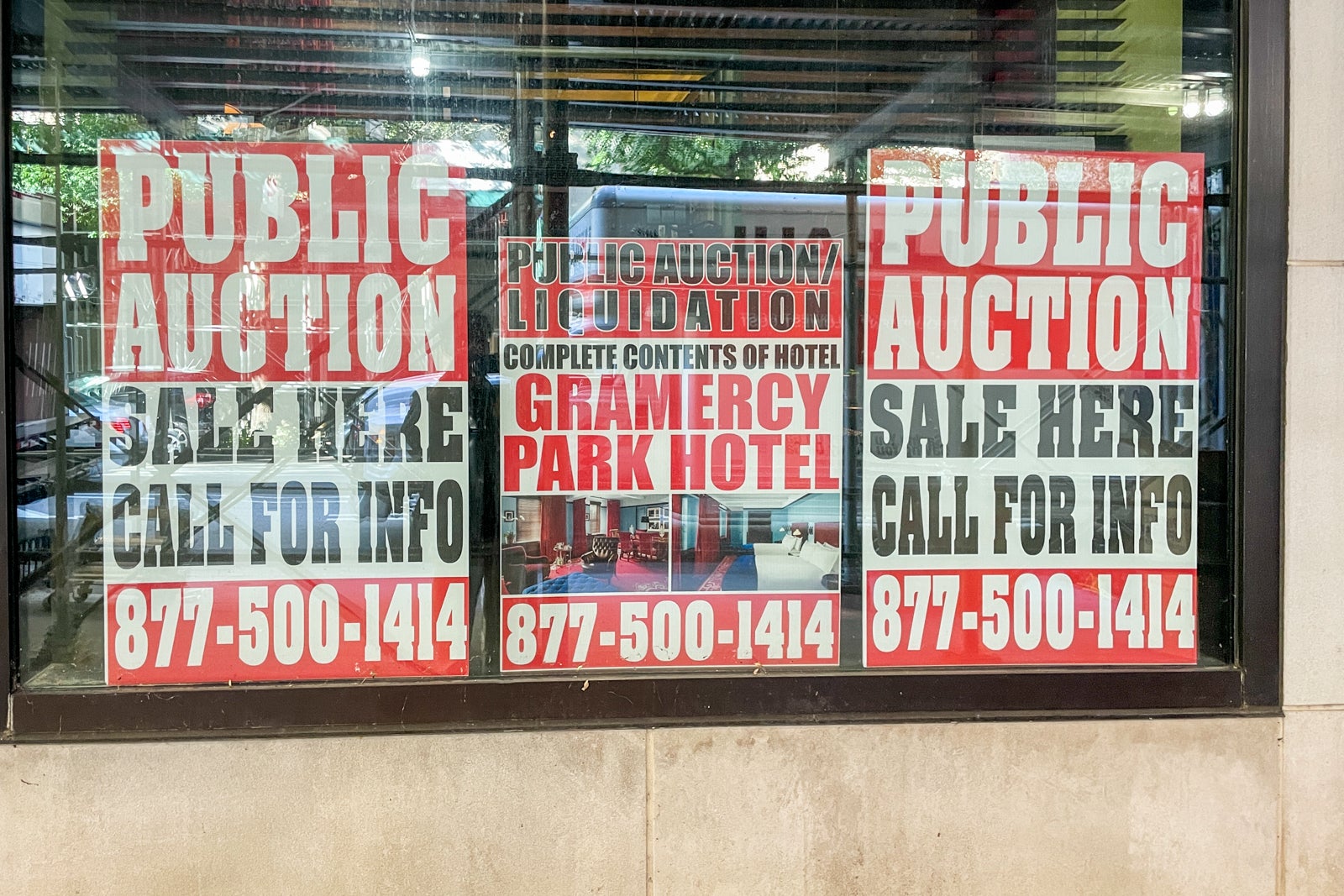 What happens during a hotel liquidation sale? Chaos, that’s what happens.

Last week, a New York City socialite I follow on Instagram posted that the Gramercy Park Hotel — a posh hotel heavy on design that closed during the pandemic — was selling everything it had.

As a hotel reporter and fan of the now-defunct hotel that was once a fixture of New York's social scene, I grabbed my bag and bolted. Who wouldn't want to own a piece of the storied hotel or of the Rose Bar, which played host to some of the world's most famous celebrities? Thankfully, the hotel was just a few short blocks from the office.

Arriving on the scene, I felt like I was back at college move-in day. People stood in corners holding large framed prints and chic gold lamps trying to call Ubers. Multiple moving trucks were double-parked on the street while muscled-up men were loading them with massive wooden bed frames, velvet wingback armchairs and mattresses.

Welcome to the world of hotel liquidations, the art of clearing a defunct hotel of all of its possessions to make way for a new owner, a demolition or an overhaul of the building. In the case of the Grammercy Park Hotel, a messy legal dispute led to the liquidation.

We’ve all seen a version of a liquidation sale, though more likely in a mall or shopping center where a closed store hangs massive signs reading, “EVERYTHING MUST GO.”

And when they say everything, they mean everything.

At the Gramercy Park Hotel, the signs outside read in all caps, "PUBLIC AUCTION/LIQUIDATION COMPLETE CONTENTS OF HOTEL."

Though I heard rumors of long lines to enter, visiting at the end of the day got me through the doors immediately. There were dozens of moody black-and-white framed prints, lamps of different heights and colors, massive wooden bed frames with mattresses, fancy china and crystal glasses, coffee-table books, industrial kitchen equipment and mountains of minifridges.

“Let’s get one and I can charge you for everything you drink in the apartment,” I overheard a woman say to another with a laugh.

Items were not tagged with individual prices but a local news station reported that prices would run between $25 to $2,500. To pay, cash was king but Venmo and Zelle were also available.

Inside, people stood over items they liked and shouted into the void of the former lobby asking for prices. It was bedlam, but the auctioneers from Best Buy Auctioneers were doing their best to keep up with the constant requests.

Though I wasn't trying to spend any money, I did find out that the large framed photo prints started at $200. I decided to pass on the options I saw that were a little too abstract for me.

Near a large couch, I overheard a couple with a toddler in a stroller debating whether or not they should buy some decorative pillows. The woman made her case for the purchase by reminding her partner that they had their very first date at the Rose Bar.

Items that were already sold had stickers with names on them — and at that time the majority of items were stickered up. "But don't worry," we were told by voices coming from different directions; more furniture was being brought down from the rooms as space was made on the crowded lobby floor.

The following day, after word had really gotten out about the sale, I returned to the Gramercy Park Hotel. This time there was a line down the block, around the corner and down the subsequent blocks. People were waiting hours for the chance to buy a used hotel bathrobe, a rug or a crystal Champagne glass.

The first time I heard about a major sale was back in 2017 when hundreds of people lined up to buy anything and everything from the shuttered Trump Taj Mahal casino in Atlantic City, New Jersey.

The Gramercy Park Hotel had just 180 rooms, but the Taj Mahal had more than 1,200, meaning there was a lot to be had. Some of those items included poker tables for $550, $8 irons and even three $250,000 chandeliers that a potential buyer from Texas flew in to check out, according to The Guardian.

Sometimes, hotels get rid of historic loot through more organized auctions, as was the case with New York's Waldorf Astoria. In 2020, over 80,000 items from the defunct hotel were sold via online auction, including items from the Peacock Alley bar and the Elizabeth Taylor Suite.

These items were all moved from New York to a mall in Massachusetts for in-person viewing prior to the online auction. Guests were told to expect to bid between $80 and $100 for a Venetian silk pillow, between $800 and $1,200 for a 13-piece tea set and between $300 and $500 for the door to the Churchill Suite, where Winston Churchill stayed during visits to New York, the New York Post reported before the auction two years ago.

In Las Vegas, hotel liquidations might be even more common. Just think about how many major casinos operate there that semiregularly refresh rooms or change hands and rebrand — and think about how massive they are. In fact, there are year-round liquidation showrooms where you can snag pieces from Strip and off-Strip resorts.

In New York, word of sample sales and one-of-a-kind shopping experiences spread fast — and getting to be one of the early few to poke around the treasures on offer at a much-loved and storied hotel was a really exciting experience.

I'm bummed that I left empty-handed, but I also wasn't in the market for an oversize green velvet couch at that exact moment.

However, if you do happen to hear of a hotel liquidation (from an iconic hotel or not) why not take a peek? Maybe you can snag a cheap minifridge for a kid off to college, lightly worn furniture for a guest room or even that big piece of wall art you've been looking for.

Featured image by TANNER SAUNDERS/THE POINTS GUY
Editorial disclaimer: Opinions expressed here are the author’s alone, not those of any bank, credit card issuer, airline or hotel chain, and have not been reviewed, approved or otherwise endorsed by any of these entities.