Articles
Edward Pizzarello covers family travel for TPG Family and also blogs at Pizza in Motion. You can find him hosting the Miles to Go podcast and eating doughnuts on Twitter and Instagram.
Follow
March 06, 2019
•
6 min read 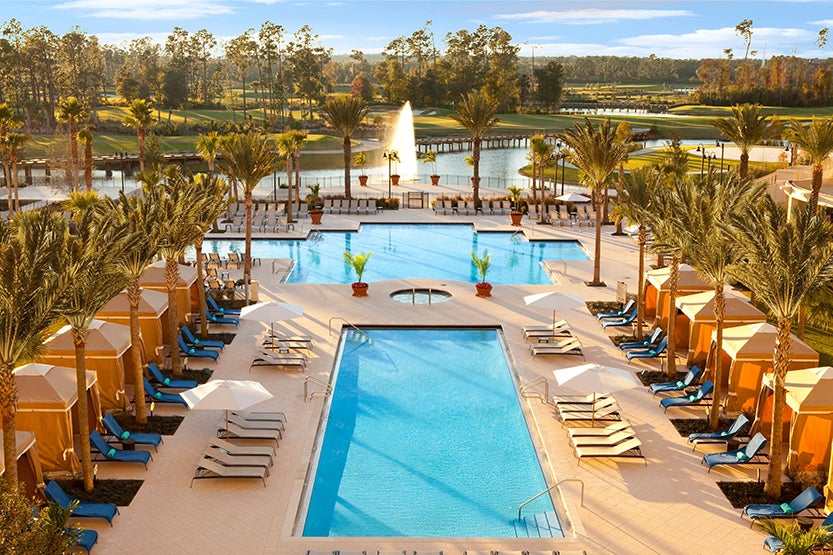 Once upon a time, only on-site true Walt Disney World Resorts got you a host of in-park benefits such as Extra Magic Hours and extended FastPass+ bookings. However, in January 2018 chain hotels within Disney Springs began to enjoy Extra Magic Hours and a jump on making FastPass+ ride bookings. At first, the Disney extended perks were just promised for 2018, but they are now running at least through 2019.

Now Disney World has extended Extra Magic Hours to two additional Disney-area hotels that are points-friendly -- the Hilton Orlando Bonnet Creek (with great waterpark and on a 482-acre nature preserve) and the high-end Waldorf Astoria Orlando. For those not familiar, guests with access to Disney Extra Magic Hours can enter a select Disney World theme park for a little longer each day than non-resort guests as a rotating park opens early or stays open late.

If you've got a healthy Hilton points budget and want a little luxury with your Disney, the Waldorf Astoria usually has award availability at 80,000 Hilton Honors points per night. It helps that Hilton Gold and Diamond elites now get included breakfast at Waldorf Astoria properties. This could be a great spot to use your weekend anniversary award nights, available with the Hilton Honors Aspire Card from American Express.

If you don't want to use Hilton points, but have The Platinum Card® from American Express, price out a stay at the Waldorf Astoria via the‘ Fine Hotel and Resorts program to get a $100 spa credit, 4:00pm checkout, breakfast for two and other perks included. Rates for this hotel are often around $400 per night via Amex FHR, which is a lot, but can still be less than paying for a Deluxe Resort at Disney, such as the Contemporary and Animal Kingdom Lodge.

Hilton Honors no longer maintains a published award chart, so it's hard to say exactly what a property will cost on any given date. However, looking at a variety of dates, the Hilton Orlando Bonnet Creek generally costs 50,000 Hilton points per night, while the Waldorf Astoria Orlando will usually fetch 80,000 points per night. The Hilton Amex welcome bonuses are a great way to get a head start on a Disney vacation.

Is FastPass+ Coming to These Hotels?

When the Disney Springs hotels became members of the extended Disney family, it was a bit odd that Hilton Orlando Bonnet Creek and Waldorf Astoria Orlando didn't join them. Both properties are technically just a bit closer to the parks within the Bonnet Creek development. It's also curious that the properties are now being announced with just the Extra Magic Hours benefit and not the extended 60-day FastPass+ booking capability (rather than the standard 30-day opportunities). After digging around a bit, I found this note from WDW Info, a reliable source on Disney World. At the bottom, it lists the following disclaimer:

*Guests at these Official Walt Disney World Hotels must present an official voucher, which they may obtain at the hotel, and a valid Theme Park ticket to utilize the Extra Magic Hours benefit. Guests without the Park Hopper® Option or Park Hopper Plus® Option must use their ticket for admission to the same theme park where they would like to enjoy the Extra Magic Hours benefit.

This is the first I've heard of a voucher that gets you access to Extra Magic Hours. For all other properties, your Magic Bands will indicate your linked hotel stay to get you access. This seems to indicate that perhaps these two hotels have not completed the full integration with Disney World's systems and may not yet be able to offer these benefits in the seamless nature the other hotels do. In other words, stay tuned.

As it has gotten harder to use points at Disney World with the on-site Swan and Dolphin going up to 50k Marriott points per night and Chase Ultimate Rewards removing all Disney Resorts from its points-booking engine, it's great to see expanded park perks to some points-friendly hotels near Disney World. If these aren't the right off-site properties for you, here's a list of the best points hotels near Disney World.

Featured image by Pool at the Waldorf Astoria Orlando. (Photo courtesy Hilton)
Editorial disclaimer: Opinions expressed here are the author’s alone, not those of any bank, credit card issuer, airline or hotel chain, and have not been reviewed, approved or otherwise endorsed by any of these entities.