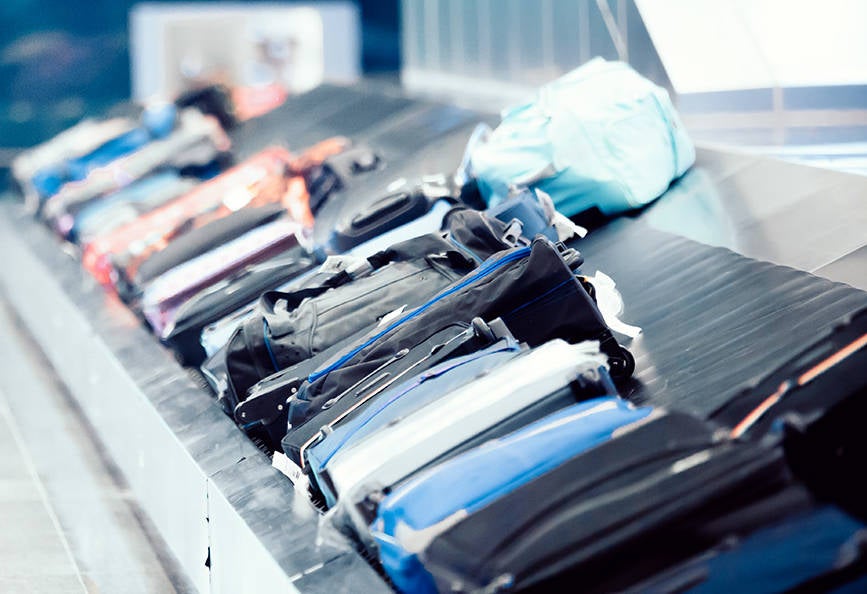 London's Heathrow Airport (LHR) has asked airlines to cancel 10% of their flights while it deals with a "baggage mountain" that has grown at the hobbled hub.

More than 15,000 passengers across 90 flights have likely been affected, according to reports. The “technical failure” — which occurred on Friday at Heathrow’s Terminal 2’s handling division — led to thousands of suitcases becoming stuck in transit as staff struggled to sort them out.

Some travelers were told it could take days to reunite them with their bags.

Get the latest travel news, tips and deals by signing up for TPG’s free daily newsletter.

While the airport says the issue is now fixed, Virgin Atlantic has already canceled at least three transatlantic flights today, including to New York and Los Angeles, while other canceled flights include Air Canada to Toronto, Air India to Ahmedabad and Aegean to Athens.

Air France, Aer Lingus, Eurowings, KLM, Lufthansa and Swiss are other lines believed to be affected.

A small number of British Airways routes from Terminal 3 are also affected. This includes all of its three daily departures to Toulouse, France, and two of its four flights to Marseilles, France.

Related: I got caught in last week’s travel mess; here’s how I avoided waiting on hold to rebook my flight

“We’re in contact with affected customers to apologize, advise them of their consumer rights and offer them alternative options, including a refund or rebooking,” a British Airways spokesperson said.

One Virgin passenger, Chelsea Alison, had arrived from San Francisco with her husband and 10-month-old baby, but then waited hours for their bags to be unloaded and delivered to them in baggage claim.

She told The Independent: “Our flight from San Francisco was delayed by nearly two hours because of problems in London [affecting the outbound flight].

“Getting off the plane was delayed because of staff issues. We’ve been sitting in the luggage hall for three-and-a-half hours.”

A spokesperson for the airport said, “We apologize unreservedly for the disruption passengers have faced over the course of this weekend."

“The technical issues affecting baggage systems have led to us making the decision to request airlines operating in Terminals 2 and 3 to consolidate their schedules on Monday, June 20. This will enable us to minimize ongoing impact and we ask that all passengers check with their airlines for the latest information.”

It's the latest in a string of problems that have hit Heathrow since travel restrictions were lifted in March, as the air industry continues to struggle with an unprecedented surge in demand for travel.

How can I avoid losing my luggage?

As long as airlines have carried bags, they’ve lost them. Every seasoned traveler has experienced the loss of luggage at some point in his or her life. However, there are steps you can take to mitigate the risk.

This is by far the most foolproof way of keeping track of your luggage. There are a number of trackers on the market, including LugLoc, Trakdot and, of course, Apple’s AirTags.

The trackers have some minor differing features but ultimately all do the same thing: allow you to keep track of your luggage via Bluetooth or GSM tracking technology on your phone.

While this won’t prevent your bag from being lost, it will at least help you recover your stuff once it’s misplaced.

At the very least, you won’t have to wait for all the bags to come off the carousel if you already know yours isn’t among them. A luggage tracker also enables you to tell the airline exactly where your bag is, so that it can hopefully be retrieved more easily.

Just like the British royal family never flies together on the same plane, you should never pack all your stuff in the same bag (unless you’re traveling alone and have no choice, of course). Share a few essentials with a travel partner so that if one person's bag is lost, you can share the misery a little rather than one person suffering a lot.

Related: The 10 incredible deals I found at the Unclaimed Baggage Store

Make sure your bag is labeled with at least two forms of identification. It’s also important to remove any old airline baggage tags, as you don’t want your bag to be accidentally re-routed to your previous destination (it can happen). It’s also smart to put some identification inside the bag as well, such as a business card.

This is the oldest trick in the book to ensure someone else doesn’t take your bag (or you don’t take theirs) at the carousel.

If you have the generic sort of suitcase that could easily be mistaken for another (like a black wheelie case), tie a large colorful ribbon on the handle that only you will recognize. That way you will know exactly when your bag comes onto the carousel, regardless of how many other black wheelies are on the same flight.

What if the airline does lose my bag?

Sometimes it happens, no matter how many steps you’ve taken to prevent it. Here’s what you should do.

This is absolutely key. Do not go home to phone the airline; you must file your claim with the airline’s baggage service office before leaving the airport.

To do this, you will need to fill out a property irregularity report (PIR), the form you get from customer services in the baggage claims hall. Keep a copy of this in case you need it to follow up on your claim.

If for any reason the airline’s baggage office isn’t open, then you need to document that fact by taking a picture of it, and then call the airline before leaving the airport. Remember, the claim process has not begun until you have a written copy of the claim that includes both a claim number and a telephone number to follow up.

Under the Montreal Convention, airlines have 21 days to return your luggage or they must compensate you for what you have lost.

What is the Montreal Convention?

The Montreal Convention is a treaty signed by most of the world’s developed countries that includes strict rules for how airlines handle claims for luggage delay, loss or damage compensation.

So, in assessing your claim, an airline may well ask for a list of the items that were in the missing bag, and possibly for original receipts, just as an insurance company would.

This only applies to international flights.

What is the maximum compensation I can get?

The Montreal Convention caps an airline’s liability at 1,288 Special Drawing Rights (SDR) for lost luggage. An SDR is a "basket" of currencies set out by the International Monetary Fund (IMF). The 1,288 SDR is roughly equivalent to $1,683 as of June 2022.

What do I need to file for compensation?

In order to make a claim, according to the Citizen’s Advice Bureau, you’ll need:

As for the claim itself, you’ll need to provide:

Related stories
Here are the best Black Friday travel deals of 2022
Great deal: Book business class tickets at premium economy prices with this Avianca LifeMiles sale
Holiday gift guide: TPG’s 22 travel-friendly picks for 2022
Vail Resorts lift-ticket sales capped; buy your Epic Pass by Dec. 4
Featured image by Getty Images/iStockphoto
Editorial disclaimer: Opinions expressed here are the author’s alone, not those of any bank, credit card issuer, airline or hotel chain, and have not been reviewed, approved or otherwise endorsed by any of these entities.