In pictures: Grounded aircraft around the world

Articles
Nicky Kelvin is the director of content and face of TPG UK, and is also an award-winning photographer. Before joining TPG UK, he was a record label lawyer and avid traveler sharing points wisdom as the "Miles Mogul."
Follow
March 23, 2020
•
6 min read 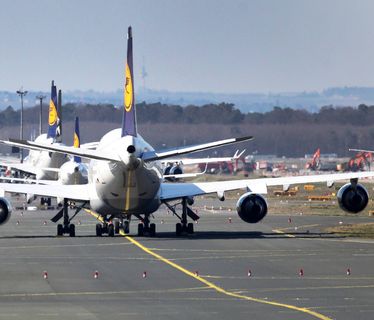 In pictures: Grounded aircraft around the world
This post contains references to products from one or more of our advertisers. We may receive compensation when you click on links to those products. Terms apply to the offers listed on this page. For an explanation of our Advertising Policy, visit this page.

The coronavirus crisis has affected everyone and everything — from individuals who are isolating to the health care system and the travel industry. Specifically, airlines.

Carriers from around the world have been forced to cut capacity, with some even grounding entire fleets. As a result, bizarre scenes are cropping up all over the globe as the aircraft take a rest on stands, aprons and even runways.

Here are 10 of the most beautiful and haunting images from airports around the world in the past few days.

Related: The logistical problems with grounding aircraft and pilots

Korean Air has drastically cut many of its routes, especially in Northeast Asia. It's taken to grounding a number of its fleet at its hub airport of Seoul Incheon (ICN).

Cathay Pacific will cut 96% of its passenger capacity in April and May, leaving lots of aircraft lined up at its hub airport, HKG.

Parts of the world's busiest airport are starting to look like a parking lot. Delta Air Lines, which is based in Atlanta, is parking more than 600 of its 1,340 aircraft, with the airline's expectation to come back much smaller after the coronavirus.

KLM will reduce its network by up to 90% in the coming days, and in a devastating blow for AvGeeks, the airline will retire its Boeing 747 fleet.

Whilst repatriation efforts continue, Lufthansa is paring down its network. During its period of capacity cuts, it will continue serving select destinations in the U.S. and other countries.

Following news that Austrian Airlines will temporarily suspend all operations beginning March 18 through at least March 28, it's in the process of bringing most of its aircraft home to Vienna (VIE).

British Airways' parent company International Airlines Group announced last week that it is slashing capacity by 75%, with aircraft being parked across many airports. While BA's long-haul fleet is quite spread out right now — from Heathrow to Cardiff and even Manila — most of its A321s are grounded at Glasgow.

SriLankan Airlines has a huge swathe of cancellations across its network. As such, it's taking to parking most of its aircraft at Bandaranaike International Airport (CMB).

For those of us who love the aviation industry, it's upsetting to see so many aircraft parked, with nowhere to go. As airlines around the world continue to suspend operations, it's likely many of these aircraft will remain grounded for several weeks — if not longer. Hopefully, soon enough, we'll see them return to the skies.