Articles
Caroline Tanner covers news and travel for TPG. She is a journalism graduate of Mizzou and Northwestern.
Follow
July 20, 2022
•
8 min read 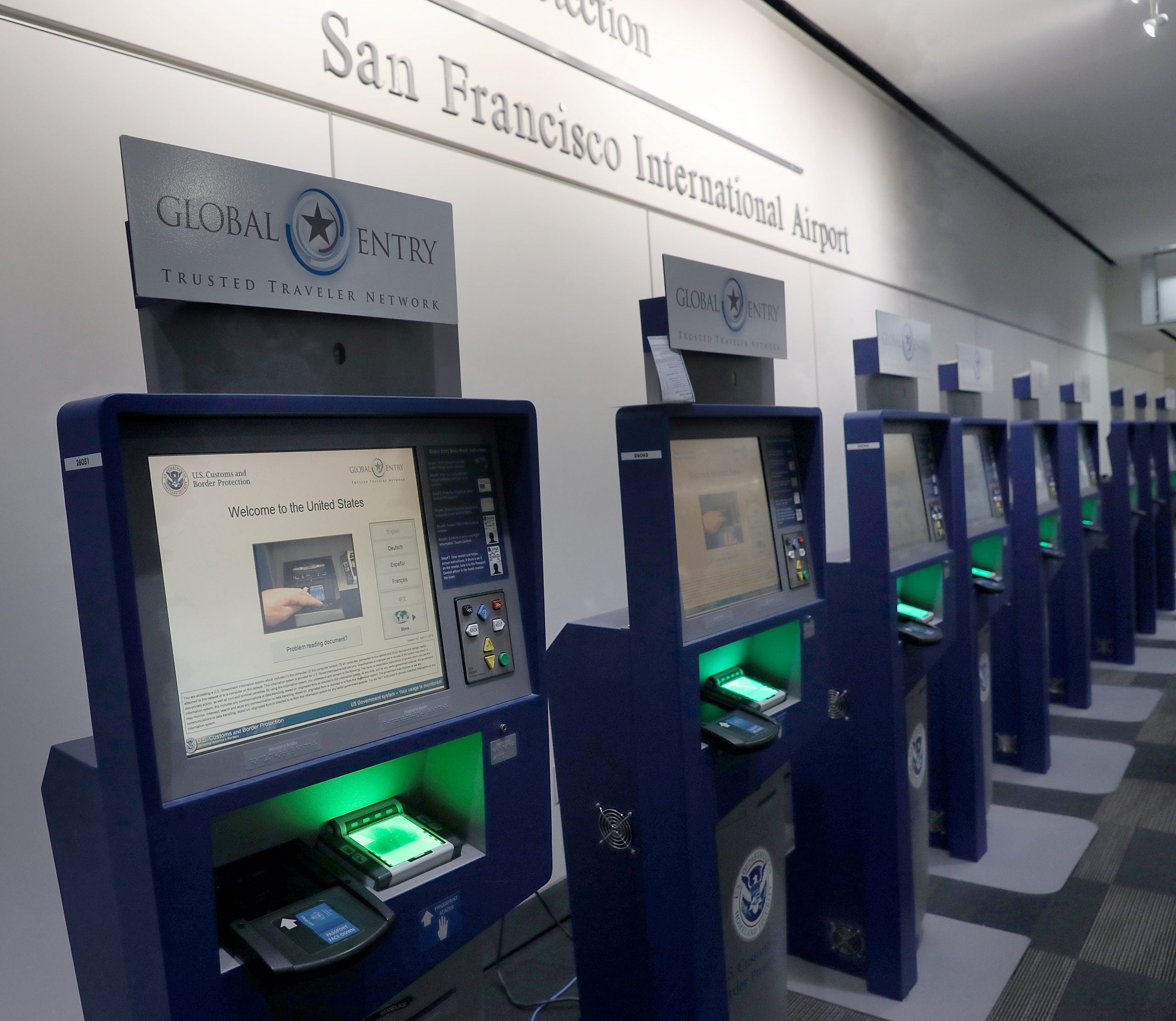 If you've ever signed up for Global Entry, you know that seven to 10 business days after being approved for the program, you're likely to receive a physical Global Entry card via snail mail. You may have very likely stuffed that card into a desk and not thought about it since.

That makes sense, especially since Customs and Border Patrol (CBP) provides corresponding literature with the card suggesting travelers do just that: keep it in a safe place to avoid losing it.

Global Entry users have come to expect expedited entry upon return to the U.S. through automatic kiosks at more than 50 U.S. airports and a handful of airports abroad, including ones in Canada and Europe — with no flash of that card required.

However, often not needing the card isn't the same as never being asked to show the card.

In fact, dozens of TPG readers (and plenty of our staff members) have recently told us they have been asked to show their physical cards at specific entry points into the U.S., including airports in Canada such as Toronto Pearson Airport (YYZ) and Calgary International Airport (YYC). And this isn't just a Canada issue.

So why is this happening when CBP clearly states a card is not necessary to use Global Entry lanes?

We've dug in and outlined potential scenarios when it could happen, so you'll know when to pack your Global Entry card — just in case.

Travelers are being asked to show their Global Entry cards

Although CBP says "it is not necessary to obtain a Global Entry card to continue using Global Entry at airport kiosks," 60-plus TPG readers responded "yes" to a question posed in the TPG Facebook Lounge asking if they had ever been asked to show their physical card to use Global Entry.

The majority of respondents said this occurred at airports in Canada, but other airports mentioned include the U.S. Virgin Islands, Mexico and domestically at John F. Kennedy International Airport (JFK) in New York, among others.

At TPG, Content Director Nick Ewen was recently asked to show his card to use Global Entry at the Toronto airport, as was editor Summer Hull in Calgary.

"I cleared security at Terminal 3, and then I could [either] go to the right to get in the regular customs line for preclearance or there was a door on the left through which I could see the Global Entry kiosks," Ewen told me. "There was an airport employee by the door on the left, asking to see my Global Entry card."

When asked about this, representatives from the Greater Toronto Airports Authority and Port Authority of New Jersey directed my query to CBP, which reiterated its policy listed online.

"Although the Global Entry card is not required for air travel, every international traveler is subject to random checks or additional questions by a CBP officer when they are entering the United States," said an agency spokesperson. "There have been no changes in the processing of Global Entry members other than the transition to facial comparison technology...[where] a person could be asked for evidence of program affiliation in order to direct them towards processing kiosks or portals or otherwise assist them in navigating the arrivals area."

Read more: Another way to speed through security: Answers to your questions about Nexus

Hull ultimately was able to access the Global Entry line in Calgary without her card, but only after being told it was a one-time courtesy. The person staffing the line said that screeners have no way to know if travelers are eligible to use that line without seeing a physical card.

Does this have to do with passing through airports with pre-clearance?

In reviewing where this is happening the most, the common thread appears to be airports that also allow those with Global Entry to preclear security, including at Cyril E. King International Airport (STT) in St. Thomas, U.S. Virgin Islands, for example.

"St. Thomas, U.S. Virgin Islands is a Pre-Departure inspection site where passengers are already in the United States. Because of this fact, passengers are not deemed as arriving from foreign where there are Global Entry Kiosks available for inspection," a spokesperson for the Virgin Islands Port Authority told me via email. "To use the Global Entry lane, U.S. Customs asks for their physical Global Entry cards to verify that they partake in the program. Absent the card, an officer will have to conduct further system checks to verify that a traveler has Global Entry."

This appears to be a requirement at Canadian airports as well, per the Canadian Air Transport Security Authority, CBP's Canadian counterpart, which said that members of Trusted Traveler Programs, including Global Entry, must show their "document of entitlement" to access those lanes. That aligns with what TPG's Summer Hull was told in Calgary.

"Passengers with a Global Entry card or sticker can access the Trusted Traveller Screening Lines at Canadian airports," a CATSA spokesperson said.

Therefore, passing through airports that allow Americans to pre-clear U.S. customs in a foreign territory before entering the U.S. might result in you being asked to show your Global Entry card as an added verification layer.

Read more: All you need to know about Sentri, the only trusted traveler program available widely to foreign travelers

When you should carry your Global Entry card

Here are the scenarios when you should plan on showing your Global Entry card.

When you are at an airport that provides preclearance

As outlined above, if you are traveling to a destination where you will use Global Entry before returning back to the U.S., then you may be asked to show the card to access that line and those kiosks.

Even though you shouldn't need your physical card to use Global Entry at U.S. airports, you should be prepared to show your card if entering the U.S. by car via Sentri or Nexus lanes, per CBP.

Sentri is another trusted traveler program that allows U.S. citizens and lawful permanent residents; Canadian citizens/permanent residents; and all other foreign nationals to enter the U.S. from Canada and Mexico via Sentri-specific lanes. Sentri users also have access to TSA PreCheck lanes at airports within the U.S. and overseas territories.

Nexus, on the other hand, provides pre-screened travelers expedited processing services when entering the U.S. and Canada by plane, car or boat, providing access to Nexus-only processing lanes at designated entry ports along the northern border, kiosks when entering Canada by air and Global Entry kiosks when arriving a preclearance airport.

As a reminder, Sentri and Nexus members also get access to Global Entry, and that card serves as membership to all three programs, which is why these individuals would need to show it.

In addition to entering the country via land and air, cruisers may want to carry their card with them since specific cruise ports may require a physical card.

For example, Port Everglades Cruiseport in Fort Lauderdale, a popular port for many cruises, including Royal Caribbean International and Celebrity Cruises, says travelers must show their cards.

"Cruise guests enrolled in CBP's Global Entry program should follow the signage directing them to the front of the line and present their Global Entry card to the Customs agent for processing," TPG cruise editor Erica Silverstein said.

If you're a Global Entry member who will be preclearing before returning to the U.S., especially if your flight is originating in Canada, strongly consider bringing your physical Global Entry card with you to ensure you are able to access the line to use the Global Entry kiosk.

Additionally, if your travels include cruising or a border crossing by land, you may want to have it handy as well.

While you won't always need it, the last thing you want is to have gone through the effort of getting Global Entry but not be able to use it.

Related: What happens if you accidentally let your Global Entry expire?

Related stories
Chasing American Airlines elite status? Here are 14 ways to earn Loyalty Points
Fly to Greece from multiple US cities for less than $700
American Airlines restores free 24-hour hold option
Holiday airfare is rising: What to know if you haven’t booked yet
Featured image by San Francisco Chronicle via Gett
Editorial disclaimer: Opinions expressed here are the author’s alone, not those of any bank, credit card issuer, airline or hotel chain, and have not been reviewed, approved or otherwise endorsed by any of these entities.