Frontier Airlines has refreshed their entire loyalty program and co-branded credit card to become more family friendly with perks and benefits that are attainable and valuable to the family and leisure traveler. EarlyReturns is no more and Frontier Miles looks to reward the whole family for their loyalty…

I’m a big time fan of the low cost carriers within the United States. For me, the bottom line is that low cost carriers make it possible for people to fly when they otherwise would often be priced out of even considering air transportation. I don’t fly low cost carriers super frequently myself, but they are a solid back-up plan for when rates go crazy, and a good primary strategy for those who simply want the cheapest way to get from Point A to Point B. I can say with 100% certainty that the availability of low cost carriers and their $14 – $29 airfare has changed the way my parents travel in a major way. In their retirement years, they imagined taking one or two trips a year, but in reality, low cost carriers, miles, and points, have allowed them to take a trip every one or two months.

Fares can be so inexpensive on low cost carriers, that earning miles and using their frequent flyer programs can seem like an after-thought. But what if a low cost carrier introduced a frequent flyer program and co-branded credit card that ramps the perks up several notches with perks that stack on low fares? What if you could earn elite status on a low cost carrier simply by using their credit card? What if this allows you to unlock perks such as family pooling of miles, free full sized carry-on bags, free seat assignments, and more?

These aren’t just theoretical questions, but they are now the reality for Frontier Airlines. I recently spent some time at the Frontier Airlines headquarters in Denver learning first-hand how they plan to revamp their program to become more family-friendly and meet the needs of the occasional leisure traveler in a way that no other airline in the United States has. Frontier made it a point to bring in travel writers (and their kids!) with a family-focus, because their announcements are going to help families the most.

Before we go any further, I have to say that if you hate the low cost carrier model, nothing in this post is likely to change your mind. No one way of traveling is right for everyone, and that is more than okay. However, if low cost carriers, and specifically Frontier Airlines, is a part of your overall travel strategy, then you are going to have some really cool new things to consider.

Let’s start with looking at the revamped Frontier Airlines World Mastercard issued by Barclays. The card has a welcome bonus of 40,000 bonus Frontier miles after you spend $500 in the first three months. Domestic award flights on Frontier Airlines price at 10,000 miles each way at their saver level, so 40,000 miles is enough for two round trips at the lowest redemption levels. That is solid, but not all that different than the version that came before. What is different is that the credit card now offers multiple new built-in perks. 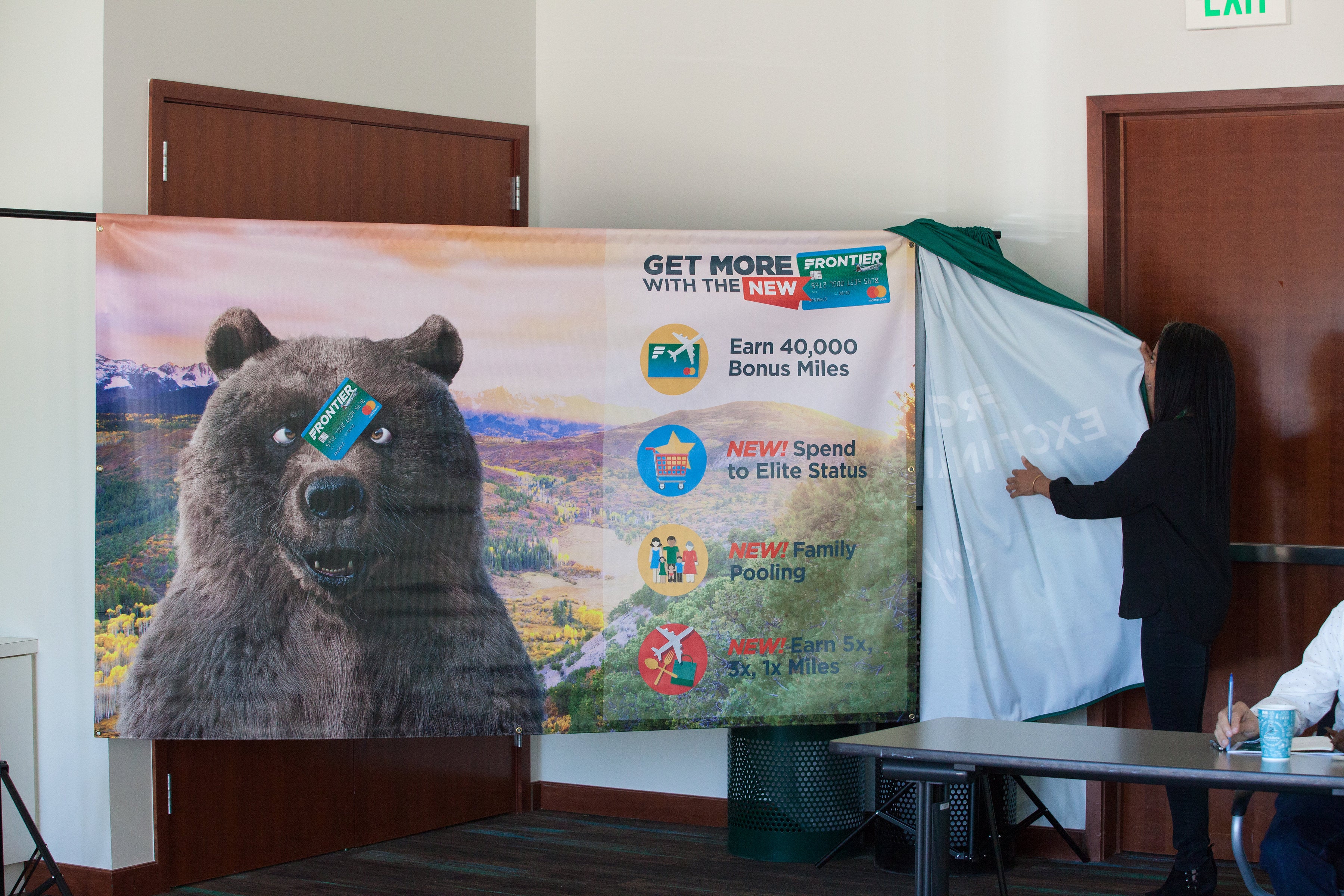 Frontier introduces family pooling for miles for cardholders and elites

First, a huge win for families is that having the Frontier World Mastercard now means that your Frontier frequent flyer account is eligible for family pooling! The cardholder and up to eight others can pool their Frontier miles together into one account in order to secure award bookings faster and have fewer random account balances to have to keep up with. This is the first time that Frontier has offered family pooling, and very few airlines in the United States offer this sort of benefit at all. The notable exceptions to that general rule are JetBlue and to a lesser extent Hawaiian Airlines. To be eligible for family pooling with Frontier, you must either have the co-branded Frontier World Mastercard or Frontier elite status.

This Frontier credit card and frequent flyer program refresh were designed to not just reward the one frequent flyer in the family, but instead reward the entire family, especially at the two higher tiers. For those not familiar with the Works Bundle you now get at the 100k elite level, it includes basically everything you could need out of a Frontier reservation. It covers your seat assignment (including stretch and exit row seats), carry-on bag, checked bag, gives you Priority Boarding, and allows you to change or refund your ticket with no fees.

The Frontier World Mastercard will continue to offer a $100 Frontier Airlines flight voucher that is awarded at each account anniversary if you spend $2,500 or more on purchases using the card each cardmember year. There is a $79 annual fee associated with this card, but if you use the flight voucher, then you obviously come out ahead on the annual fee before you factor in any other benefits.

A final major change is that the Frontier credit card has a new everyday earning structure. While the previous version of the card only offered 2x on Frontier Airlines purchases and 1x elsewhere, the card now earns:

While these are not all new offerings, it is still worth knowing that having the Frontier World Mastercard gets you a redemption fee waiver when you book an award tickets, Zone 2 boarding, and if you make at least one purchase on the card every six months then your Frontier miles won’t expire.

This is not all just about the Frontier credit card, although it does fit in very nicely with Frontier’s overall new approach and changes. The ‘old’ Frontier EarlyReturns frequent flyer program had just one elite status level that was unlocked with 20,000 miles of Frontier flying in a calendar year or 25 flown Frontier segments. Now their Frontier Miles frequent flyer program retains those requirements for the base elite tier, but there are new tiers and lots of new benefits to be unlocked. 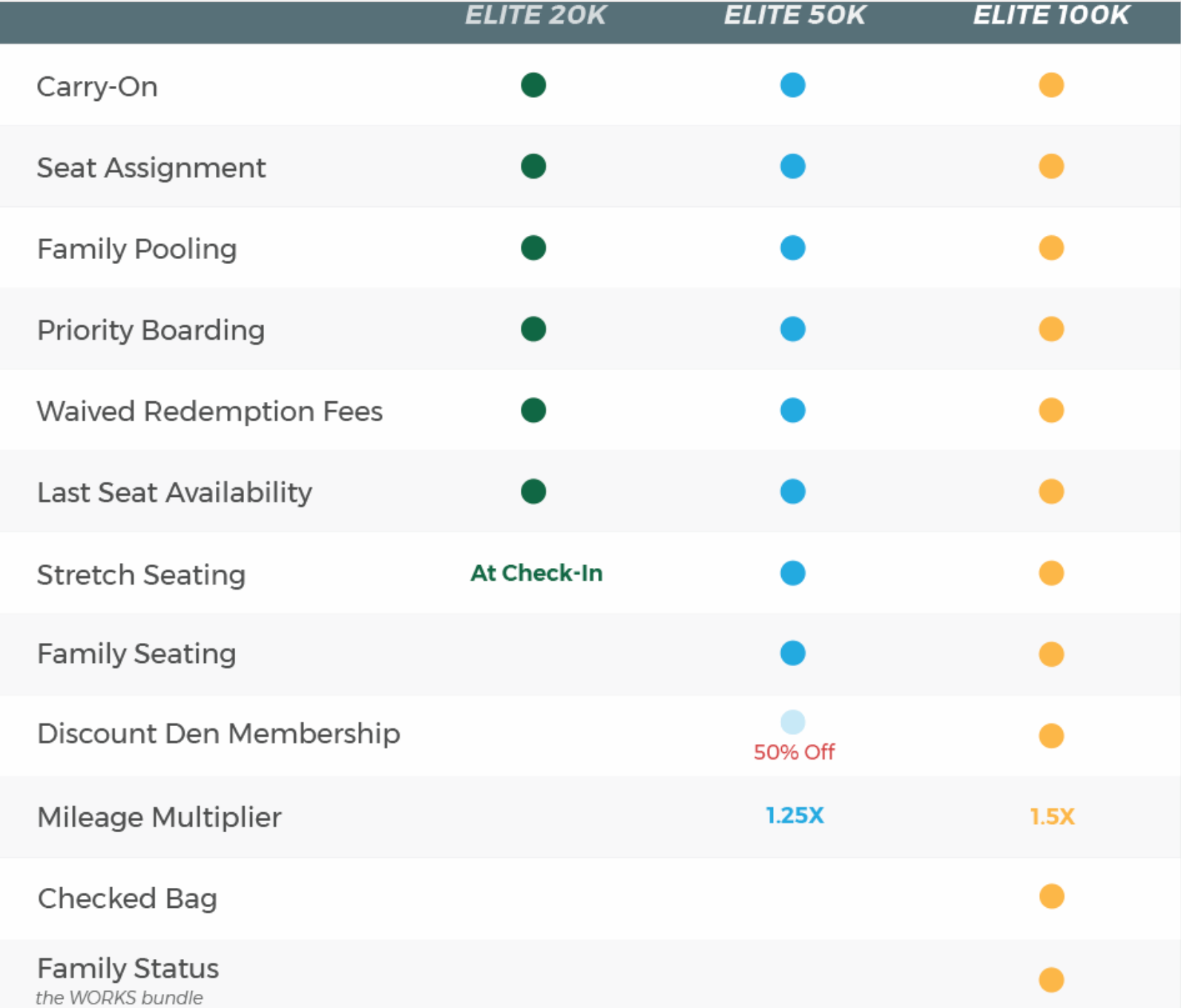 Even though it is very cool that you can earn top tier Frontier elite status simply by using the credit card, I know not everyone is going to charge $100,000 per year on a Frontier Airlines credit card. However, I think it is very reasonable for Frontier flyers to achieve the Elite20K status with either an average of $1,667 spent on the card each month, or less than that if you mix in some paid Frontier flights.

As an example, if a Denver-based Frontier cardholder flew three round trip paid Frontier flights in a calendar year to Orlando, Houston, and Seattle, they would earn about 6,864 Frontier miles from their time in the air. That leaves just $13,136 left to charge on the Frontier card in a calendar year, which is just $1,095 per month. Obviously, the more you fly Frontier, the less you need to charge on the card to unlock elite status.

While the 20k elite status level is very in range for many traveling families, it is the 50k elite status level where things get really good with included seat assignments for the entire family of up to 9 people on the same reservation and 50% off the Discount Den membership. Being Houston-based, my primary airline is United since I like to fly nonstop as much as possible and Houston is one of their hubs. I flew over 25,000 paid miles with United last year to earn their base level elite status. I also charged close to $25,000 on their co-branded credit card, even though those charges do not count towards earning status with United.

If I did those exact same totals with Frontier, I would now be able to earn their valuable Elite50K status with perks that confer to others in my traveling group. This status level won’t be within range for everyone, but if you combine some moderate paid travel with the use of the co-branded credit card, it starts to look like a reasonable goal.

I’m genuinely excited about the changes that have arrived for the Frontier Airlines World Mastercard and the new Frontier Miles frequent flyer program. The program did not go revenue based or take away the award chart or pull perks away. Instead, it found a way to make achieving elite status easier, make the perks more meaningful for family and leisure travelers, and it introduced a way for families to share miles with each other.

This will not make Frontier my primary airline, in part because their route network out of Houston is pretty limited. However, they are growing like crazy in many areas with plans to serve 28 new airports in 2018. My parents already fly Frontier several times a year and are now strongly considering getting the revamped credit card, and could push for elite status in their new program with a mix of paid flights and charges on the credit card.

If you are like them, and already use Frontier some in your travels, then everything announced today should be good news for your family. Let’s hope that Frontier starts a trend and more US based airlines and loyalty programs put families and leisure travelers at the heart of their program improvements. 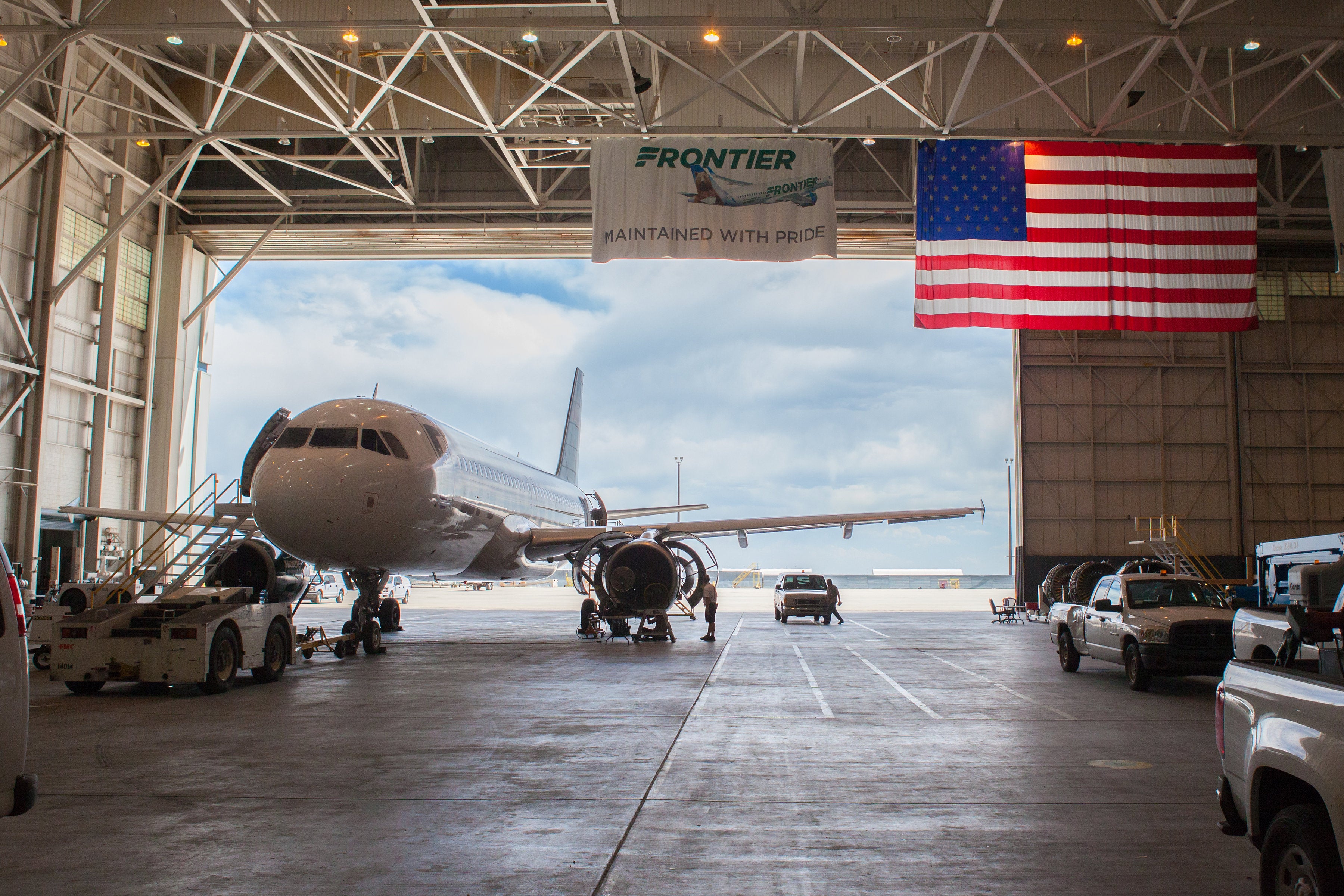 Summer Hull , aka Mommy Points, ran the Mommy Points site for families who want to travel more for less using miles and points for seven years. She now heads up a variety of special projects at TPG when she isn't exploring the world with her own two girls.
You might like
Turkish Airlines debuts its 12th US gateway: Seattle
News
1h ago
Kimpton’s newest secret password can help you ‘stay cool’ with a fun surprise at check-in
News
2h ago
United finally expands its domestic first-class meal service
News
2h ago