Articles
Max Prosperi is a part-time frequent flyer and travel writer and full-time student. Based in St. Louis, Missouri, Max covers a variety of topics with a focus on points, miles, and aviation.
Follow
Dec. 02, 2018
•
3 min read 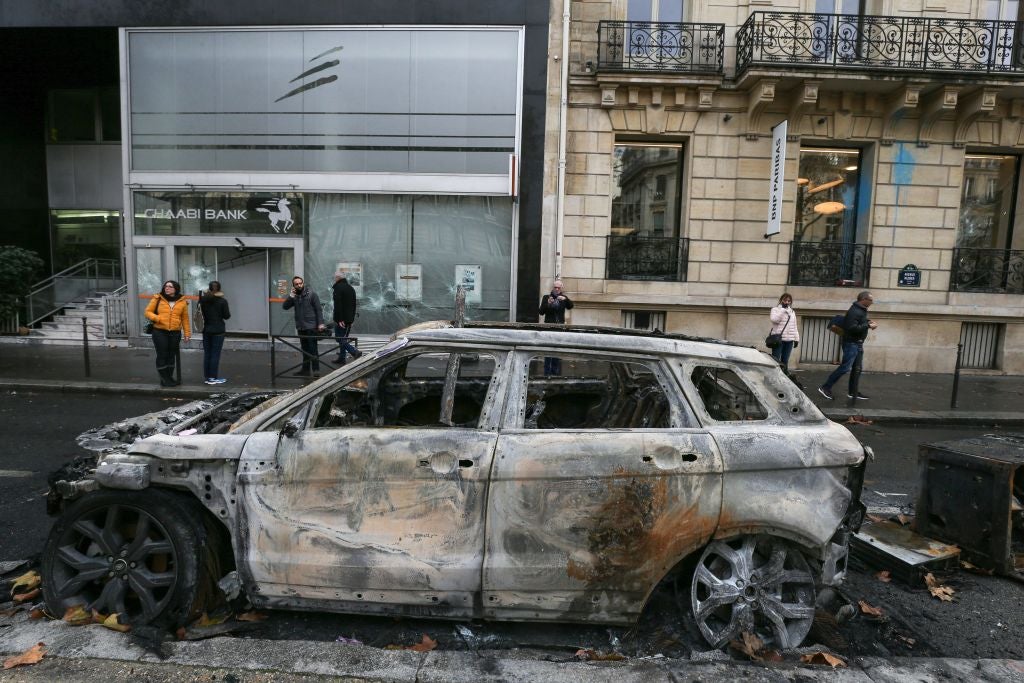 France Considers Declaring State of Emergency After Violent Demonstrations Continue
This post contains references to products from one or more of our advertisers. We may receive compensation when you click on links to those products. Terms apply to the offers listed on this page. For an explanation of our Advertising Policy, visit this page.

For the third week in a row, demonstrations across France have turned violent. The demonstrations, which began in mid-November, are the result of new fuel taxes that increased the average price of fuel across France. The first round of protests attracted upwards of 300,000 demonstrators and was, for the most part, peaceful. Now, as the anti-fuel tax movement gains support, protests have lingered into December and have grown violent.

A week after the first round of riot-like demonstrations in Paris, the Arc De Triomphe has been vandalized and popular department stores in the city are closing as French authorities consider declaring a state of emergency.

Early last month, the French government under President Emanuel Macron continued the policies of former president Francois Hollande, further increasing taxes on fuel across the country. According to CNN Money, the average price of fuel in Paris is now around $5.54 per gallon. The fuel taxes were established to encourage a reduction in gas consumption and an increase in electric cars and public transportation ridership. The new fuel taxes have faced widespread criticism and backlash, prompting the ongoing Gilets Jaunes, or Yellow Vests movement. The name Yellow Vests come from the garments that demonstrators are often seen wearing.

While demonstrations have largely left tourism unaffected, this appears to be changing. Just last week, protests in France resulted in the closure of the popular Avenue Champs-Élysées, home to the Arc De Triomphe. This past week, the Arc De Triomphe was vandalized. Now, popular department stores across Paris are closing their doors as riots become more widespread.

According to Reuters, stores including the Galeries Lafayette and Printemps closed their doors as the riots grew dangerously close. The report from Reuters also noted that a fire had been reported at a building on the Avenue Champs-Élysées. Nearly 35,000 demonstrators participated in the Yellow Vest protests this past week.

CNN reported that a French official on Twitter stated that while many protestors were peaceful, there were upwards of 1,500 "troublemakers" who worked to create riot-like conditions across France. Among incidents that created chaotic conditions throughout Paris were the construction of makeshift barricades and the torching of multiple vehicles. French police used tear gas and water cannons to disperse violent and unruly crowds, with 200 arrests reported.

Demonstrations continue to take place across popular avenues of Paris near tourist attractions, landmarks, luxury hotels and high-end shopping centers. Neither French authorities nor the US Department of State has urged travelers to reconsider visiting France or any of the country's major cities. Airlines and hotels have yet to issue any travel waivers. Though demonstrations continue and occasionally grow unruly and violent, protestors are not concerned with tourists but rather government policy.

However, if you are planning to travel to France, we recommend you prepare for travel delays and demonstrations. If you’re booking flights or hotels on a card that offers a bonus for travel purchases like the Chase Sapphire Reserve, you’ll likely have certain kinds of built-in protection if things go wrong. Here's a full list of cards with travel protection. If you do not hold a card with travel insurance, consider reaching out to your airline or hotel to inquire about a penalty-free cancellation.