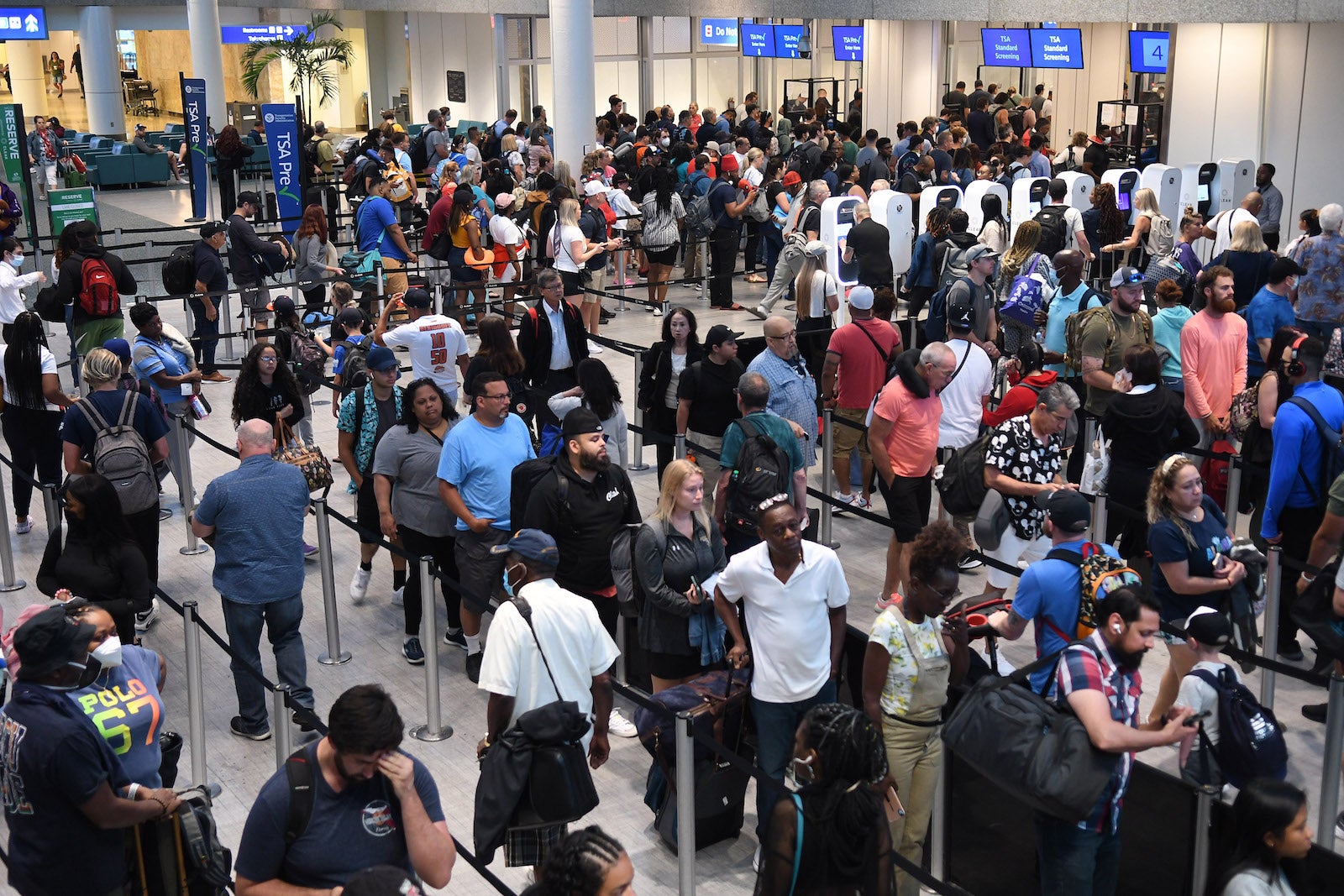 With U.S. transit officials keeping a close eye on airline performance this Fourth of July weekend, Mother Nature did not help operations. So far this weekend flight cancellations have not quite reached the levels we've seen in recent weeks, but five of the largest domestic carriers saw more than 4,000 flights delayed Friday, on a day that the TSA shattered the record for passenger traffic during the pandemic.

Airlines had thousands more flights delayed Saturday, according to data from FlightAware. That's after Federal Aviation Administration (FAA) had warned more disruptions were likely amid bad weather in parts of the country, including along the East Coast.

The disruptions started early in the holiday weekend. In the midst of bad weather in several key cities Friday afternoon, the FAA's website at one point showed ground stops in place – meaning no planes could take off or land – at all three major New York airports, all three major Washington, D.C., airports, along with Atlanta (ATL), Charlotte (CLT), Orlando (MCO), Philadelphia (PHL) and Chicago-O’Hare (ORD).

New York LaGuardia Airport (LGA) got hit the hardest on Friday with nearly 45% of its departing flights experiencing some delay.

These disruptions impacted the start of what’s shaping up to be the busiest holiday travel weekend for Americans in over two years. The TSA reported its agents screened 2,490,490 passengers Friday – tens of thousands above the record set on Sunday and the third time that pandemic-era record has been broken in a week.

Related: Why is my flight canceled because of ‘weather’ when it’s clear outside?

Friday’s weather threatened to further unravel challenged airline operations, with some carriers having days in recent weeks in which they canceled 100-200 flights. Delta Air Lines made a pre-emptive move this week by offering travel waivers for the holiday weekend, allowing those with reservations to change their flights cost-free.

Related: I got caught in a recent travel mess. Here’s how I avoided waiting on hold to rebook

Meanwhile, as of Saturday evening, American Airlines led the way with 96 cancellations – around 3% of its operations. Delta had canceled 68 flights on Saturday and Republic (a regional carrier operating flights for American and United) canceled about 8% of its schedule.

The delays mounted Saturday, too, with more than 2,400 delays Saturday among American, Delta, JetBlue, Southwest and United by early evening.

These latest hurdles come as airlines are under scrutiny after challenges over the last couple of months – heightened as travel demand has surged close to pre-pandemic levels in recent weeks – all while airlines navigate staffing shortages and what airline industry officials say are air traffic control challenges stemming from the FAA.

“We’re watching closely to see how airlines are meeting their responsibilities to get passengers where they need to go this weekend,” U.S. Transportation Secretary Pete Buttigieg said in a tweet Friday, elaborating on those expectations in an interview this week with NBC News, where he mentioned the need for airlines to be more resilient in the face of weather disruptions.

If your itinerary is disrupted this weekend, TPG Managing Editor for News Clint Henderson recommends a multi-faceted approach to getting your trip back on track.

“Consumers have to be their own best advocate,” Henderson said in an interview Friday with CNN, suggesting flyers should try to be among the first to re-book their flight before seats fill up.

“You should have the airline’s app downloaded on your phone, so if things go sideways you can potentially re-book yourself. But at the same time you’re doing that, get in the customer service line and also ping them on social media.”

What about a refund?

While a weather disruption may mean the airline won't pay for your hotel if you get stuck somewhere, federal transportation regulations do entitle you to a refund when your flight gets canceled if you choose not to re-book. Buttigieg took to social media Saturday to remind passengers that under federal transportation rules, flyers are entitled to get their money back when an airline cancels their flight -- regardless of the reason -- if they choose not to travel.

Department of Transportation (DOT) rules also specify that customers are entitled to a refund if the airline makes a “significant schedule change and/or significantly delays a flight” and the passenger chooses not to travel. However, the department has not specified what constitutes a “significant delay” and notes that the particular circumstances can determine whether the customer is refund-entitled, with DOT handling these situations on a case-by-case basis.

Buttigieg pointed out that while customers are always entitled to a refund when their flight is canceled, airlines will sometimes offer miles as an alternative. He encouraged travelers to research the value of airline miles. TPG regularly updates our points and miles valuations, which show you how many cents a mile is worth in a particular airline's loyalty program. For instance, TPG values Delta Air Lines SkyMiles at 1.41 cents per mile. If the airline were to offer you 5,000 miles as compensation for a canceled flight, that'd be worth around $70. Using this tool could help you determine whether you're better off taking a cash or miles offer from the airline.

Driving has its downsides

Even with a record number of passengers in the air, most holiday travelers are on the road. While drivers won't have to contend with TSA checkpoints, baggage fees or cancellations, they do face the continued crush of high gas prices.

As of Saturday, AAA shows the national average for a gallon of gas is $4.82, down about 20 cents from a peak of $5.01 in mid-June. California drivers are paying an average of $6.25 per gallon, with $4.90 the current average in New York. This can make your trip expensive, but there are some nice points earning opportunities that could help offset the cost if you pay with the right credit card.

For instance, a driver getting an average of 25 miles per gallon on a 485-mile road trip from New York City to Bar Harbor, Maine, this weekend would pay approximately $190 round trip. The Citi Premier® Card earns you 3 points per dollar spent on gas stations and so does the Marriott Bonvoy Boundless® Credit Card (for the first $6,000 annually, combined with groceries and dining spending) so you could earn 570 points if you have one of those cards.in your wallet. The Hilton Honors American Express Surpass® Card gets you 6 Hilton Honors points per dollar spent on gas, translating to 1,140 points for your gas spending.

Related: The 4 best cards for fueling up may surprise you

In recent weeks we’ve seen bad weather at the beginning of the weekend snowball into a flurry of cancellations over the ensuing days. Certainly, disruptions at a majority of major east coast airports Friday did not get things off on the right footing this holiday weekend.

With hopes of things running more smoothly through the rest of the weekend – but more stormy weather forecasted in some parts of the country – it’s a good idea to be prepared as you head to the airport with your airline app downloaded and an understanding that things might not go entirely according to plan.

Related stories
Great deal: Book business class tickets at premium economy prices with this Avianca LifeMiles sale
Holiday gift guide: TPG’s 22 travel-friendly picks for 2022
Vail Resorts lift-ticket sales capped; buy your Epic Pass by Dec. 4
These Black Friday hotel deals can save you hundreds on your next stay
Featured image by SOPA Images/LightRocket via Getty Images
Editorial disclaimer: Opinions expressed here are the author’s alone, not those of any bank, credit card issuer, airline or hotel chain, and have not been reviewed, approved or otherwise endorsed by any of these entities.