Articles
Summer Hull , aka Mommy Points, ran the Mommy Points site for families who want to travel more for less using miles and points for seven years. She now heads up a variety of special projects at TPG when she isn't exploring the world with her own two girls.
Follow
July 05, 2018
•
8 min read 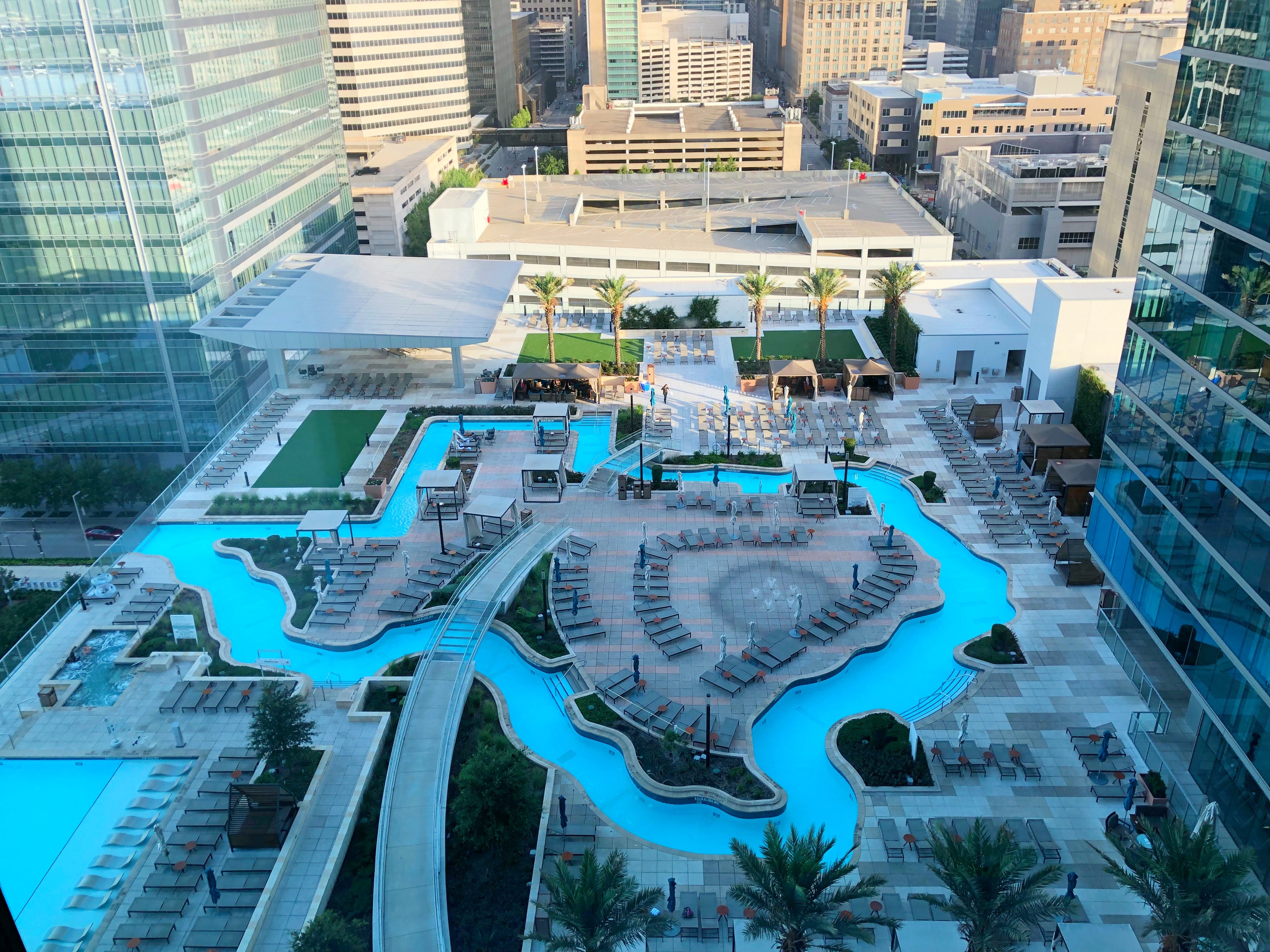 Float a Texas Shaped Lazy River in Downtown Houston
This post contains references to products from one or more of our advertisers. We may receive compensation when you click on links to those products. Terms apply to the offers listed on this page. For an explanation of our Advertising Policy, visit this page.

Who doesn't love the idea of relaxing in a lazy river and then having almost immediate access to all the activities and attractions of a major downtown? Normally, you can't have both of those things at the same time. However, this is Texas, and at the Marriott Marquis in downtown Houston, you can have a rooftop lazy river in the shape of Texas just steps away from some of the best that Houston has to offer!

We recently got the itch to get away, but it was not the right time for a long or crazy trip. Instead, it was the perfect time for a one-night family staycation where we packed up the car and drove less than an hour into Houston to arrive at this very unique destination.

The Marriott Marquis Houston opened just a few months before Houston hosted Super Bowl 51 in early 2017. It is a sleek, massive 1,000+ hotel room property that is right across the street from downtown attractions such as Discovery Green, and just a stone's throw from the Astro's baseball stadium.

Downtown Houston is great, but the star attraction of this trip for us was unquestionably the Lone Star State shaped lazy river on top of the sixth floor of the Marriott Marquis. To get into this one-of-a-kind lazy river, you have to have a wristband...and yes, they check. To get a wristband, you need to book a room and secure up to four wristbands for the room's occupants. Summertime rates can easily be $200 - $300 per night, but thankfully you can also use 35,000 Marriott Reward points per night to book a room for up to four people so you can sleep and swim without dipping into your savings.

We went on an early July weekend and the place was hot, sunny, and packed. In fact, if you can avoid a weekend day, it will probably be to your benefit.

Alternatively, plan on getting out to the river first thing in the morning when it is much easier to find a spot to relax and enjoy, rather waiting until than once things get going later in the day by 11AM.

While the adults felt a little cramped by the crowd at times, the kids didn't care one bit. They grabbed a tube and went on lap after lap around the shape of Texas, coupled with short breaks to take in the view.

There is a shaded area you can camp out under, which is very important as there is little 'natural' shade over the lazy river during the heat of the day.

If you want something a little more private than a shared covered area, you can rent a small covered area or cabana from $110 for a half-day, which isn't the worst idea. If you are out there for any length of time, sunscreen, sunglasses, hats, and shade are an absolute must.

Be sure to also pack flip flops or water shoes because the concrete gets to be about 8 million degrees in the pounding sun. The water itself was surprisingly cool, but the pavement will burn your feet.

There is poolside food and drink service that came by pretty regularly, even on a very busy day. While the service was totally adequate, none of us particularly liked the poolside chicken quesadillas, fries, or chicken fingers. I'd recommend saving your appetite for some of the much better downtown Houston dining options and just grab a cool drink by the pool.

The lazy river is open from 6AM - 10PM and people were out there every single one of those minutes, even into the night.

In addition to the lazy river, there is also a heated hot tub and a gorgeous infinity pool that becomes adults-only after 6PM when they bribe the children out with free popsicles...which was pretty brilliant.

Tips for booking a stay at the Marriott Marquis Houston

In terms of booking a room at the Marriott Marquis in downtown Houston, I would not recommend paying extra for a lazy river view unless you just have money to burn. We booked a lazy river view room to test it out, but from our floor, you couldn't really see the shape of Texas.

Not only that, but you can get a free birds-eye view by just riding the elevator up to the high floor and looking out of the window near the elevators. Next time, I'd save my money and book a standard room rather than worry about watching people hang out by the lazy river. Otherwise, the room itself was very quiet, comfortable, and provided our family of four a great night's sleep.

Other than the lazy river, the standout of the Marriott Marquis Houston was the M Lounge. Our Marriott Platinum status got us complimentary access and the lounge was not only massive, but stocked with better than average food and drinks for a domestic club lounge.

Marriott Gold status would also get you in the lounge, or you can pay a higher rate for included club access. While club access here was quite nice and helpful, since you are in the middle of downtown with lots of nearby options, it really isn't essential at this property.

What I loved about the M Lounge was that for breakfast, there wasn't just one or two hot items, but several options. This included bacon, an egg white veggie scramble, breakfast potato casserole, pigs in a blanket, scrambled eggs, and more. In addition to the hot items, there was a large spread of pastries, cereals, yogurts, cheese, meat, and fruit.

We also appreciated that throughout the day we were able to pop in for sodas, waters, and snacks. If I had one suggestion, it would be to make juice available during the day, at least upon request. Our two-year-old really wanted some juice at one point during stay, but it was only available in the lounge during breakfast and not when we asked in the afternoon or evening.

If you are making the trip to the Marriott Marquis Downtown Houston with kids, I highly recommend pulling yourself away from the lazy river for a little bit and walking across the street to Discovery Green to play and explore in the splash pad, kayak, climb the playground, roll around in the open spaces, and more.

From the Marriott Marquis Houston, you are also not far from Minute Maid, the Toyota Center, the Underground Tunnels, the Downtown Aquarium, and the original Ninfa's on Navigation, which is more than worth a stop for some solid Tex-Mex in my opinion.

Putting a lazy river on the top of a hotel in the middle of downtown is such a Texan thing to do, so it truly is fitting that the river is in the shape of its home state. If your travels bring you to Houston, or you live in the area and want an easy staycation, I recommend a night or two with your family at the Marriott Marquis Houston. The only real issue to deal with is simply how hot and busy it can get on a weekend afternoon in the summer.

Otherwise, the perks of a resort plus the convenience of downtown means that we are very likely to be return guests.