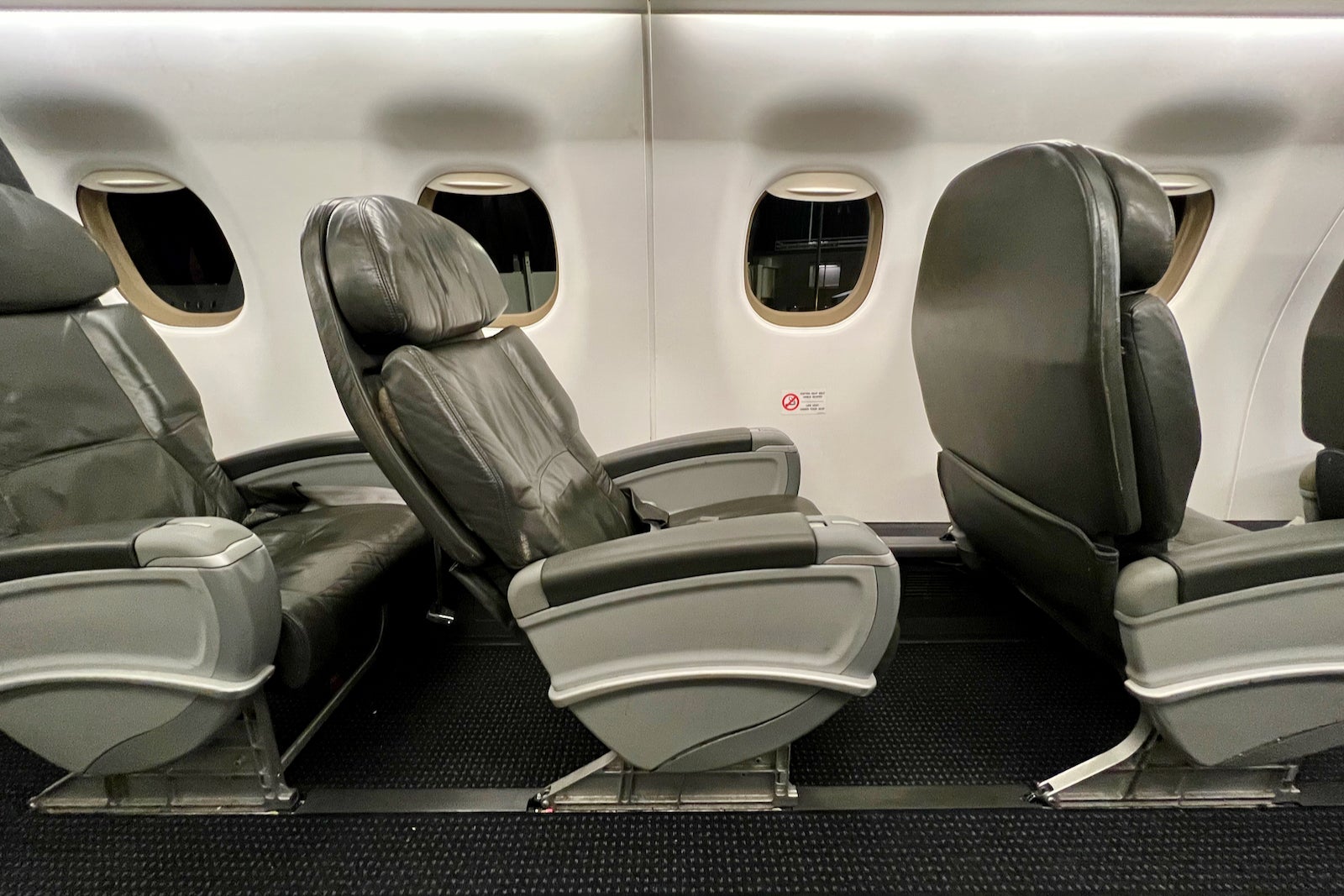 Flying within the U.S. is generally a pretty consistent experience, especially if you’re seated in the pointy end of the plane.

Traditionally, domestic first class offers a spacious 2-2 configuration without any middle seats. Plus, the recliners are wider and offer more legroom compared to economy.

While there are occasionally times when internationally-configured wide-body planes (with lie-flat pods) are deployed on domestic routes, you should expect the more “traditional” first-class experience when flying on an aircraft operated by one of the Big 3 U.S. carriers.

But, you don’t necessarily need to luck out with a twin-aisle plane to upgrade your next domestic first-class experience.

As surprising as it may seem, a subset of the regional jets operating for American, Delta and United actually offer a much improved premium-cabin experience.

In fact, in my mind, the Embraer E170 family offers my favorite domestic first-class recliner in the sky — and here’s why.

Perhaps the biggest reason for flyers to choose the Embraer E170 family (which consists of both E170 and E175 variants) is the spacious and more comfortable configuration.

Instead of the traditional 2-2 arrangement on most mainline jets like the Airbus A320 or Boeing 737, these smaller regional jets have just three first-class seats per row.

There is a “throne” seat on the port side of the aircraft, and two seats next to each other on the starboard side.

For those flying alone, there's no better domestic recliner better than the solo ones on the "A" side of the Embraer E170 and E175. You get a prime window view, as well as direct aisle access, so you won't need to interrupt your neighbor to use the lavatory or share your armrest with anyone else.

The single seats are quite popular with business travelers, and they are often the first to be selected. So, before your next flight on this regional jet, be sure to check the seat map to see if the “good" seats are available.

Those who enjoy the view from the outside will especially appreciate the Embraer E170 family. It appears to have larger windows than its mainline counterparts, giving aviation enthusiasts like me great views for miles.

Plus, the windows are closer to eye level than you'll find on some of the smaller regional jets, like the CRJ-200.

That said, my all-time favorite airplane windows are those on the Airbus A220 (that measure 11 inches wide and 16 inches tall). Nevertheless, as far as domestic jets go, the Embraer E170 family comes in a close second.

Frequent travelers who spend time on regional jets may be familiar with the “gate valet" system.

The smallest planes don’t usually have space for full-size rollaboards, meaning that you’re forced to gate-check your larger carry-on during the boarding process. That can be especially inconvenient if you're connecting.

Fortunately, it’s not something you generally need to worry about with the Embraer E170 — that’s because the planes have larger overhead bins that can fit full-size rollaboards. (Note that the bins above first class are a bit smaller, so you may need to use space above coach if you board last.)

They may not be as spacious as the new Airspace XL bins installed on select mainline Airbus jets, but those boarding an E170 in the first few groups shouldn't need to worry about gate checking their bags.

The Embraer E170 is also a desirable plane for elites looking to score complimentary upgrades. Statistically speaking, it’s easier to score an upgrade on an E170 than it is on a mainline jet.

For example, some of United‘s E175s are outfitted with 12 first-class recliners and 58 coach seats — first class accounts for nearly 20% of the entire plane.

Meanwhile, the airline's newest signature domestic jet, the Boeing 737 MAX 8, has 16 seats in first class and 150 in coach, meaning that the forward cabin accounts for under 10% of the entire plane.

The percentage of first-class seats on the E170 family is about as high as it gets for a domestic route.

Coach is good too

The economy cabin on the E170 family is also better than your traditional domestic experience.

For one, there are no middle seats on the plane. The 2-2 configuration means that everyone will end up in either an aisle or window seat.

While the exact configuration varies by airline, the coach seats on the E170 jets are (generally speaking) wider than those on larger mainline planes.

In American's case, the main cabin seats on the E175 are about 18.5 inches wide, which is nearly two inches wider than the economy seats on the Oasis-configured Boeing 737 MAX.

Wi-Fi can be hit or miss

If there's one downside to the regional jet onboard experience, it’s the connectivity. Due to the narrow fuselage of the Embraer E170 family, there's less room to install a large (and heavy) satellite internet radome.

Historically, that's meant that the plane is stuck connecting to the slower air-to-ground spectrum (though some internet providers have recently built smaller satellite radomes that fit on top of these jets).

This slower system doesn't just offer inferior performance, it also can’t be used during taxi, takeoff or landing. Due to potential interference, the system will only work when the plane is above 10,000 feet.

For those who absolutely need to stay connected while traveling, it’s worth noting that there are some reasons to avoid the E170 and E175 jets.

If you're looking for the best domestic first-class experience, look no further than the Embraer E170 and E175 regional jets.

Even though these planes are smaller than their mainline counterparts, they offer a more spacious 1-2 first-class configuration, with large windows and space for full-size carry-on bags.

Plus, with a greater proportion of first-class seats, your upgrade odds are even better on these regional jets.

Those seated in coach will also enjoy wider seats, and no one will be forced to sit in a middle since they don't exist on these planes.

Aircraft seats aren't created equally — and those looking for some of the best in the domestic skies will find them on regional jets, as surprising as that may seem.

Related stories
17 ways to earn lots of Marriott Bonvoy points
Delta SkyMiles Gold Amex card review: Perfect for casual Delta travelers, now with a 65,000-mile offer
Quick Points: These award tickets are best to book at the last minute
21 pro budget travel tips expert travelers use all the time
Featured image by Zach Griff/The Points Guy
Editorial disclaimer: Opinions expressed here are the author’s alone, not those of any bank, credit card issuer, airline or hotel chain, and have not been reviewed, approved or otherwise endorsed by any of these entities.