How small should airplane seats be? The FAA wants to hear from you

Articles
Bill Fink is a senior writer for The Points Guy covering travel news, trends, and cool adventures. His award-winning stories have been featured in AARP, BBC Travel, Frommer's, Lonely Planet, National Geographic, Outside, Yahoo Travel and many others.
Follow
Aug. 03, 2022
•
8 min read 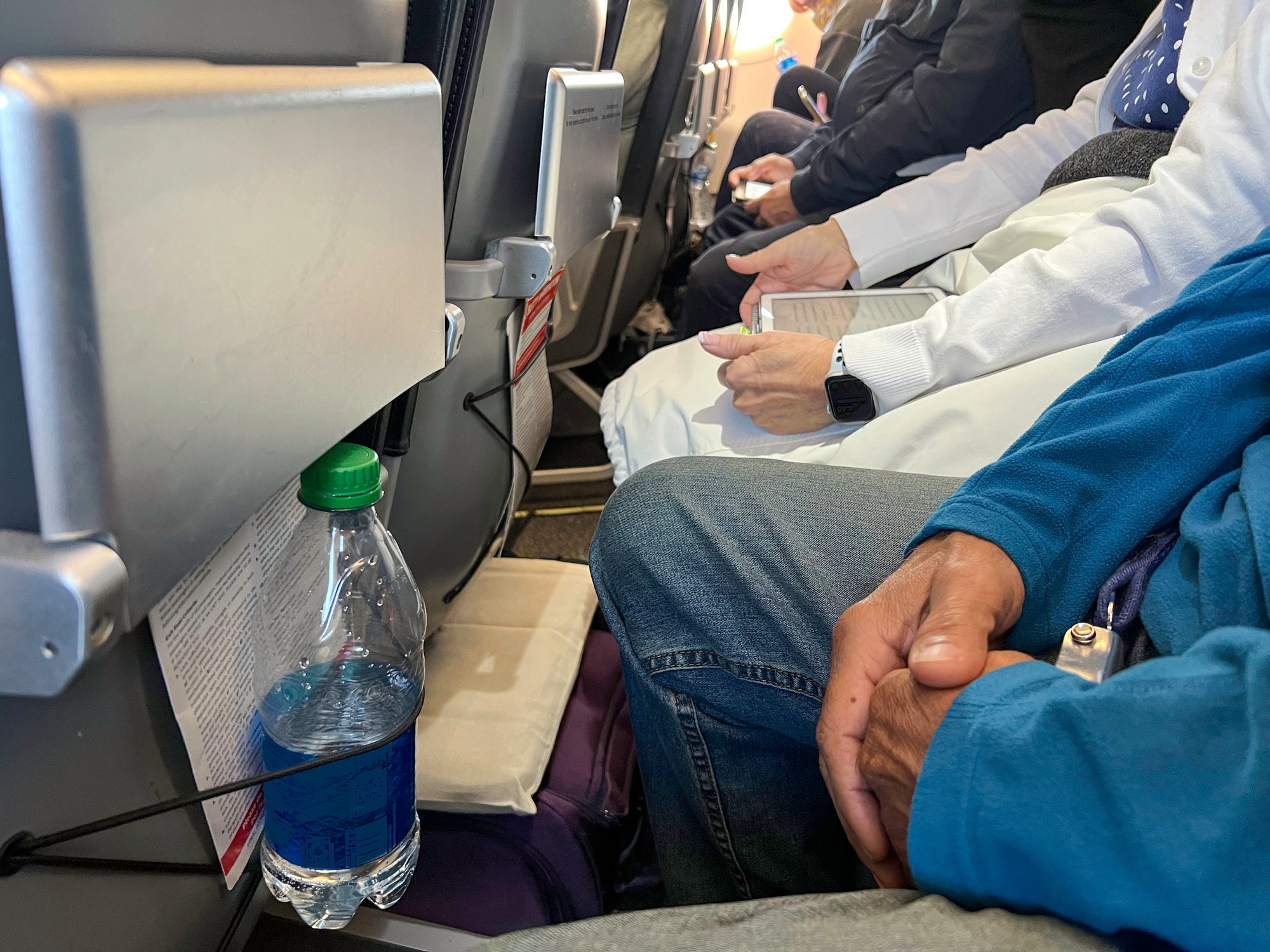 How small should your airline seat be?

Beginning Aug. 3, 2022, the Federal Aviation Administration will seek public comment on potential regulations guiding minimum seat dimensions and spacing on commercial aircraft. This is a long-overdue follow-up from the 2018 FAA Reauthorization Act, which directed the FAA to issue rules about seat sizing.

Such regulations may seem like a good thing for consumers who for years have been increasingly squeezed by airlines' shrinking seat sizes. However, a closer look at the proposed legislation points to several reasons why this process may end up making your plane trip even less comfortable.

This potential downside is because the FAA's directive on seat sizing is related to safety, not comfort. The focus of the effort is primarily related to airplane evacuations, according to the FAA's draft document.

Nevertheless, safety regulations could still translate into a better trip for you, and it may be worth your while to share your thoughts with the FAA here on the Federal Register.

TPG took a look at some of the background of this proposed legislation to help you better understand what it might mean for you.

FAA mandate is for safety, not comfort

Will this regulation make your flight more comfortable? Look no further than the FAA's draft form requesting input.

The agency states it is not requesting any comments related to "how the dimensions of passenger seats might relate to passenger comfort or convenience."

This lack of concern for your comfort isn't necessarily out of spite. The FAA only has a "statutory authority governing aviation safety," not consumer satisfaction, for airlines flying within the U.S.

Under part of the FAA's safety mandate, commercial airplanes used in the U.S. must be designed in such a way as to enable all passengers to evacuate the plane within 90 seconds during an emergency situation. This is the time determined to escape the potentially fatal fire and smoke in airplane crashes where the fuselage remains intact.

While regulations exist for aisle width, emergency lighting, emergency exits and evacuation slides, among other features, no current regulation exists for seat sizing. Airplane seat sizing measures include the width of the actual seat and the distance between seats, referred to as the pitch.

Typical pitch length in economy class for the main carriers is 30 to 31 inches (down from an average of 35 inches a couple of decades ago), with discount flights cutting pitch down to as low as 28 inches.

As someone who is 6 feet, 3 inches, I've found it to be physically impossible to sit with my knees straight forward on some discount carriers, even with the seat in front of me in a fully upright position. Factor in an emergency situation where you and everyone else wedged into tight seats need to quickly exit the plane and I can easily imagine just how much seat sizing matters.

In 2019, the FAA tested evacuations from planes for various seat sizes and pitches, as TPG reported. To simulate an emergency situation, the FAA paid test subjects a 25% bonus for being in the first wave to escape the plane.

This resulted in some "advanced egress techniques," including "swimming" on top of other passengers and seats, according to the FAA's 2020 summary report.

Despite a few injuries during the escape drills, the FAA declared the simulation a success and took no further action related to seat width or pitch. However, the agency faced quite a bit of criticism when it revealed that the test subjects only included able-bodied individuals ranging in age from 18 to 64, with almost all being younger than 60 years old. Any given flight could also include the elderly, children and people with limited mobility or other handicaps, so the test was far from an accurate representation of an everyday flight.

“I am disappointed but not surprised that the flawed study came to the foregone conclusion the airline industry dictated," said Congressman Steve Cohen in a press statement regarding the FAA's inaction on seat sizing that was released earlier this year. His Seat Egress in Air Travel Act had directed the FAA to establish a minimum seat size back in 2018.

"I repeatedly called upon the FAA to reexamine its study parameters and take into consideration the time it takes for elderly travelers, children and people who have disabilities to safely evacuate aircraft," Congressman Cohen continued. "I look forward to participating in the FAA’s forthcoming public comment period and hope the input is taken seriously before the FAA makes its final determination on minimum seat dimensions that are necessary to ensure passenger safety."

Related: Travel etiquette: The final word on the right to recline

What are people saying about seat sizing?

So what are people saying about seat sizing, and will it even matter?

When the public comment period opens for the seat sizing rules, you'll have the chance to write anything you'd like on the topic. However, the FAA emphasizes that "comments that include technical data and information will be the most helpful."

While it may be fun to suggest the FAA declare that all economy seats have lie-flat beds, as frequent flyer Jesus Andujar suggested to TPG, know that the FAA is under no obligation to take any public comments provided into consideration, as Andujar correctly stated.

Airline lobbyists will likely fight any proposal by the FAA to limit the size or number of seats in a plane. Any mandate of a seat pitch measuring more than 28 inches may put some discount airlines out of business (or, at least, have them claiming it will do so).

Some TPG readers have shared that they don't believe the FAA should be mandating seat size at all, saying that it's a free market so you should pay for more legroom if you want it. However, as airlines continue to consolidate, consumers — especially those on a budget — are left with fewer choices. If the top three airlines (or maybe four if the JetBlue-Spirit merger wins regulatory approval) all decide to shrink their seats, travelers on a tight budget don't have many choices when flying.

Along with seat pitch, seat width is a hot topic in Facebook's TPG Lounge, with more than 100 members discussing the matter. Reader Patrick Atagi noted that there may be a connection between seat width and "behavioral problems on planes," asking the group if limited seat space can lead to some passengers being violent toward flight crewmembers and those sitting near them. Anyone who has spent a cross-country flight battling over an armrest or dealing with "body overlap," as one reader delicately put it, can attest to the feeling of frustration experienced while in cramped quarters.

Beyond the concerns about more violence and slower evacuation times, smaller seats may also increase your odds of getting blood clots induced by deep vein thrombosis.

"Our estimate is that only 20% of the population can reasonably fit in these seats now," said Paul Hudson, president of the advocate group FlyersRights, in a statement on the organization's website. "It’s beyond a matter of comfort, or even emergency evacuation; there are serious health and safety issues when you’re put in cramped conditions for hours on end."

Related: 7 tips for picking the perfect airplane seat every time

The FAA's introduction of a public comment period regarding potential regulations about minimum seat sizing is a signal that a mandate may be on the horizon.

While the agency is under no obligation to implement any of the comments left on the Federal Register website, the sum total of input may impact the congressional debate for the FAA Reauthorization Act in 2023, a required part of that department's funding.

Who knows, maybe your suggestion for beer taps in all seats will be read as part of the permanent congressional record.