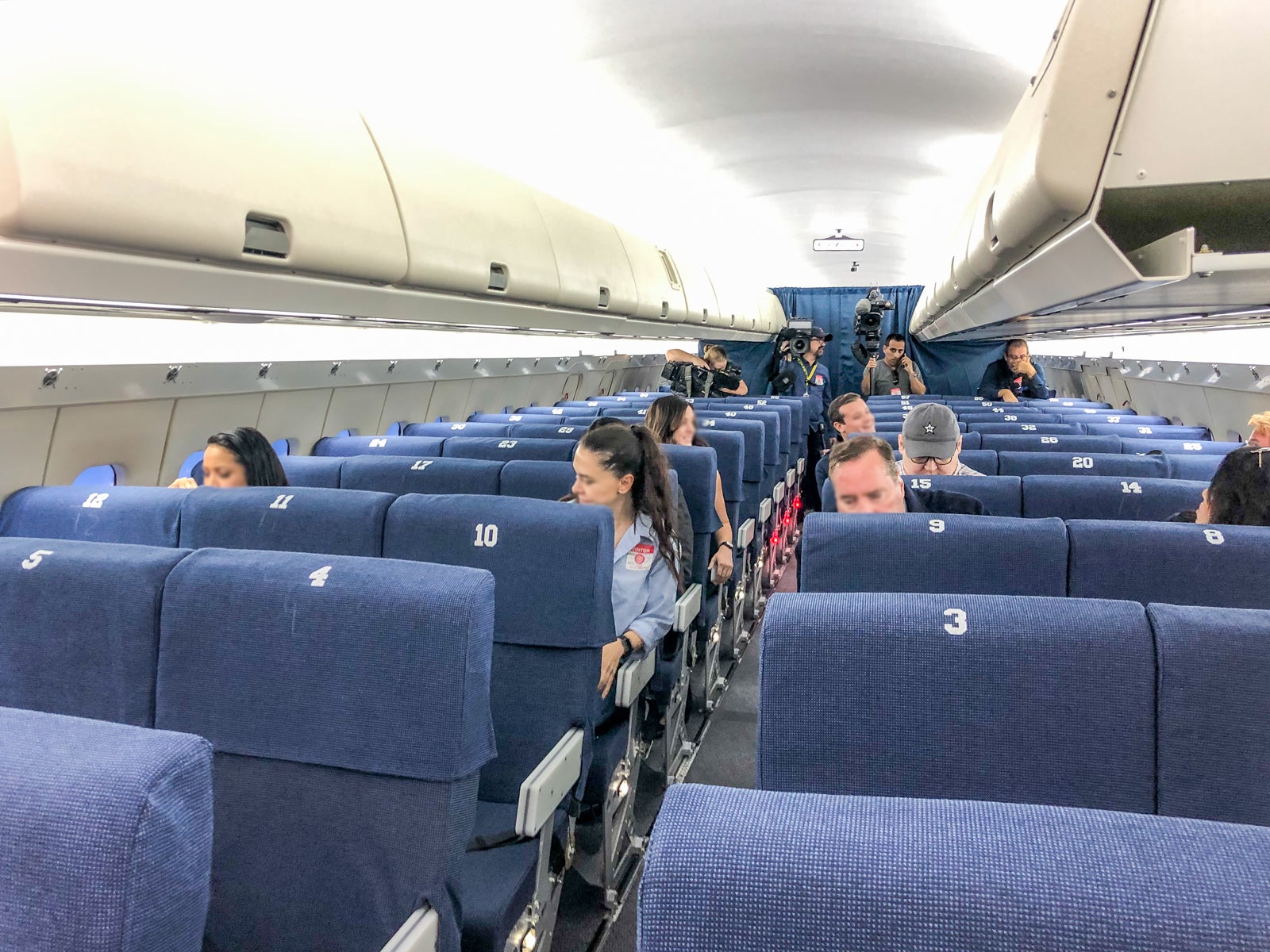 This is where the FAA does its tests to determine minimum dimensions for plane seats
This post contains references to products from one or more of our advertisers. We may receive compensation when you click on links to those products. Terms apply to the offers listed on this page. For an explanation of our Advertising Policy, visit this page.

When the Federal Aviation Administration received its new round of funding last year, it was ordered by Congress to set minimum dimensions for airplane seats.

Passenger advocates have long said that ever-densifying airplane cabins are not just increasingly uncomfortable — they may also be increasingly unsafe.

Paul Hudson and others at Flyers Rights, one such advocacy group, contend that tight airplane seats can raise the risk of health complications like deep vein thrombosis (DVT) and can also hinder evacuations.

As part of the mandate to determine minimum safe seat dimensions, the FAA will begin conducting live evacuation tests next month at its Civil Aerospace Medical Institute (CAMI) at the Mike Monroney Aeronautical Center in Oklahoma City.

The tests will focus on gathering data about how efficiently passengers can evacuate in different seating configurations. Groups of able-bodied, adult participants (the study is not going to include disabled passengers, children or animals) will be timed as they evacuate seats of different widths and pitches. Pitch, in this study, is considered the distance from the occupant’s seatback to the back of the seat in front of it.

The study will not make any specific recommendations for minimum seat dimensions, but will provide data to the rule-making committees as they set those determinations. The results are expected to be published in summer 2020.

Because the tests will not be open to the public, the FAA invited a group of reporters to tour the facility before they begin.

The Mike Monroney Aeronautical Center, where the tests are going to be conducted, is located adjacent to the Oklahoma City Will Rogers World Airport (OKC). It is a major training and evaluation facility for the FAA. Before we saw the evacuation simulator, we were given a briefing and taken on a tour to learn more about the other work carried out there.

In addition to safety testing, the facility offers a number of trainings for aviation professionals. Melchor J. Antuñano, CAMI's director, told the group about a full-day "global survival training" that teaches aviators survival skills in the event they crash-land in an inhospitable environment.

Participants learn skills like how to survive in sub-zero temperatures and how to respond during a water evacuation.

The center also has a number of spatial-disorientation simulators, which help pilots learn how to respond and trust their instruments if they lose situational awareness.

Crash tests also happen at the facility, which help determine the safest seat design for passengers.

There is also an oxygen deprivation chamber, which can help pilots and crews recognize the signs of hypoxia and learn how to respond in depressurization emergencies.

After learning about some of the other work that goes on at the site, we were taken to hear more about the seat study. The researchers, led by David Weed, a human factors research specialist and coordinator of the cabin safety research team, explained that the evacuation tests are essentially a fact-finding mission. He also debunked a popular misconception: these tests aren't evaluating seat configurations against the so-called "90-second rule." That regulation has to do with airplane certification, and the upcoming study will not affect an airframe's airworthiness; they're simply meant to examine what effect seat dimensions have on passengers' evacuation efficiency.

Following the briefing about the study, the group was led to the evacuation tester: the flexible aircraft cabin simulator, or flex sim.

As its name suggests, the flex sim can be configured in a variety of different ways. Seats can be moved close together or farther apart, and their armrests can be replaced to mimic different widths.

The simulator can also project a variety of images on its "windows," to reflect different possible evacuation conditions.

During the tour, we were also shown how the simulator uses smoke machines to replicate evacuation conditions during a fire, though that feature won't be in use during the seat dimension testing.

To make the upcoming tests more realistic, the researchers explained that flight attendants will be in the mock cabin yelling evacuation orders. And, to add to the urgency, evacuees will be given a financial incentive if they are among the first to exit the simulator.

Although the results won't be published for some time, the tests are likely to be a key component as the FAA weighs eventual seat dimension standards. It's unclear exactly how the rules will ultimately be written, but these tests will provide the authors with the most up-to-date and relevant data as they weigh their options. What it means for passengers will remain unknown at least until the results are published, and more likely until the new rules are written, so watch out for developments as the process moves along.