Articles
Caroline Tanner covers news and travel for TPG. She is a journalism graduate of Mizzou and Northwestern.
Follow
Aug. 23, 2022
•
9 min read 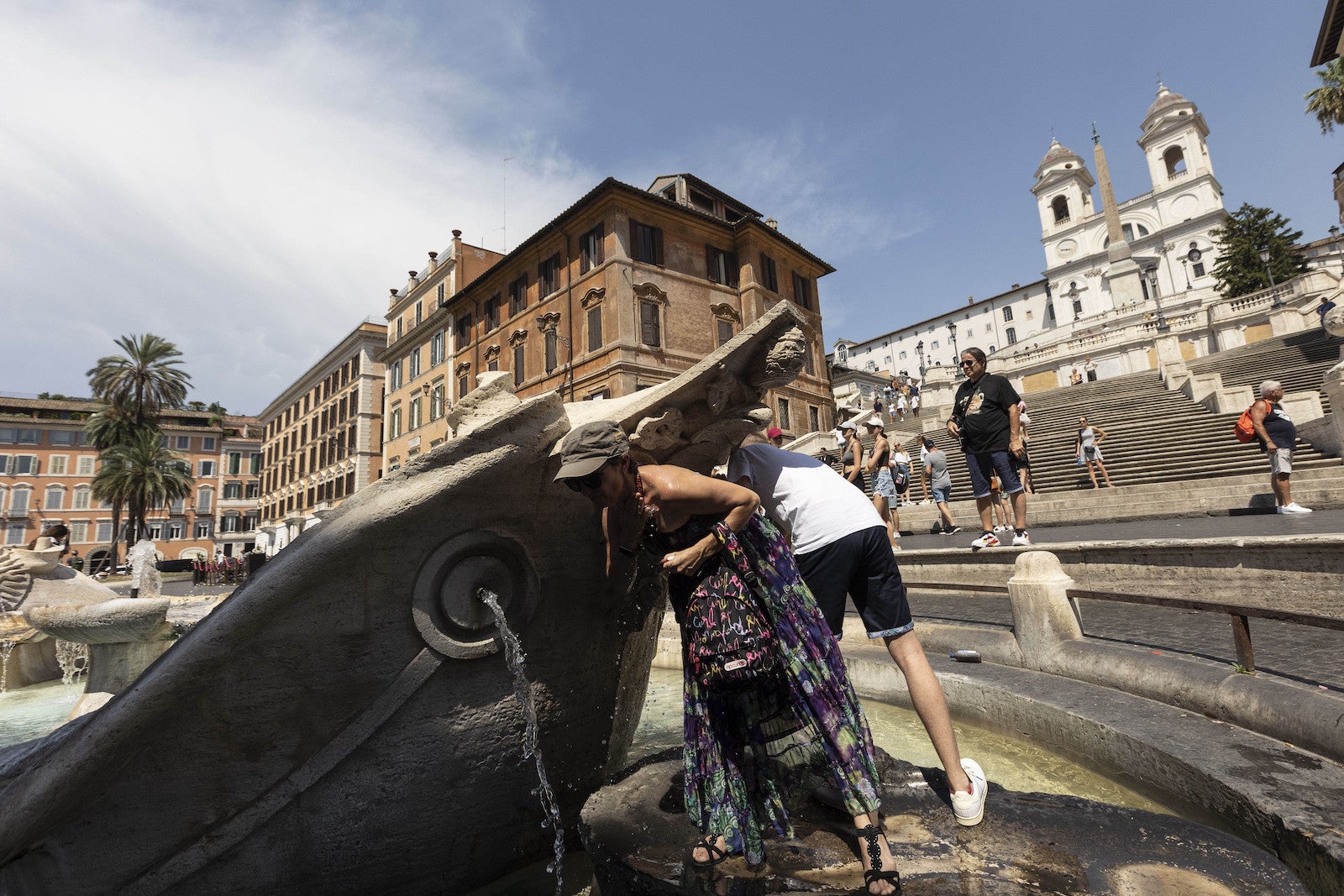 If you know me, you know that my love for air conditioning knows no limits. When booking travel, it's something I make sure my hotel room has, regardless of the time of year or destination.

Turning on the A/C is usually the first thing I do when I step into a hotel room. However, because A/C isn't available in many private homes and public buildings in Europe, including hotels and other lodgings, I try to avoid visiting the region from May through August.

Travelers like me who are obsessed with air conditioning should be aware of new measures in Europe limiting the use of A/C in summer and heat in winter. It's part of a wider effort by the European Union to reduce natural gas demand by 15%. The EU hopes to meet that target by March, though individual countries have implemented varied enforcement measures, some effective through the end of 2023.

So far, only governments in three countries — Italy, Greece and most recently Spain — have announced temperature limits affecting public spaces, such as airports, hotels, restaurants, movie theaters, museums and shopping malls. These come at a time of extreme heat throughout various parts of Europe this summer, including a heat wave that brought triple-digit temperatures not seen since 1757.

For those planning on visiting Europe soon to enjoy one last taste of summer or shred powder on its ski slopes this winter, there are a few things you'll want to keep in mind as you finalize your trip. Here's all you need to know about the EU's recent changes to its laws about air conditioning and heating — and how they may affect your vacation.

As of mid-August, Greece, Italy and Spain have all announced that A/C and heat in public buildings cannot be set lower than a certain temperature in summer and above a specific temperature in winter.

Even with these new rules in place, air conditioning remains rare throughout much of Europe. As a result, travelers will likely face limited access to A/C no matter which country they visit. Ultimately, how noticeable the temperature difference will be will depend on which buildings tourists enter.

In Spain, for example, the rules apply to all commercial establishments, including department stores, shopping malls, cultural spaces, movie theaters, train stations and airports, according to a press release issued by the Spanish Ministry for the Ecological Transition and the Demographic Challenge on Aug 1.

"Both hotels and airports fall under the scope of the energy savings regulations," an EU spokesperson for Spain told TPG via email.

Although Greek and Italian officials have not specified what exactly "public buildings" means, their rules will likely look similar to Spanish guidelines and therefore apply to places tourists frequent, including hotels, bars, restaurants, museums, theaters and other cultural points of interest.

Based on my experience traveling throughout Europe, public transit and restaurants are far less likely to have A/C, while it could go either way with hotels. American hotel chains with properties abroad, such as Hyatt, are far more likely to have A/C than a boutique hotel, for example.

Should you be staying at a hotel with A/C in your room, you can expect to be able to continue regulating it as you please, per the hotel representatives I spoke to.

"Guests can control the temperatures in their individual rooms," a spokesperson for IHG confirmed via email. "We are following the latest guidance on air conditioning in hotels as issued by the local authorities."

However, the hotel's public spaces, such as the lobby, the gym and any bar or restaurant, are where you may feel a difference in temperature.

"At this time, we are advising our hotels to check the local legislation requirements and adapt their procedures by taking appropriate actions in respect of the hotels’ public spaces," a Hyatt spokesperson told TPG. "Globally, Hyatt hotels face different energy efficiency opportunities depending on building type and age, climate, layout and local infrastructure, among other factors. Energy projects include installations of new and efficient air handling systems and implementation of energy optimization systems."

Representatives from Hilton, Marriott, Wyndham, Melia Hotels International, the Italian Ministry of Economy and Finance, the Hellenic Parliament in Greece and the Spanish Ministry for the Ecological Transition and the Demographic Challenge, plus EU spokespersons from Italy and Greece, failed to comment for this story.

Could this be a sign of future A/C charges at hotels?

Some of the European hotels that currently have air conditioning already charge travelers extra to use the A/C in hotel rooms via an amenity fee inclusion noted separately from the advertised price of a room. These fees typically start around 10 euros (or roughly $10) per night.

Though we have yet to see any major hotel chain implement a fee for guests who choose to use air conditioning in their room, it's not out of the realm of possibility. After all, apartment landlords in some major U.S. cities, including New York, charge tenants for using their A/C window units in summer.

"There is a monthly additional fee to the landlord of anywhere from $25 to $50 that buildings charge when utilities are included," said TPG managing editor Clint Henderson. "You pay it on your rent bill."

Unlike in the U.S., most private homes in Europe — including apartments and free-standing options — do not have A/C, as temperatures historically didn't necessitate it until recent years.

Given the dated infrastructure in many European buildings, installing A/C units would be a massive undertaking, which is why many buildings in Europe remain without them. Because of this, outfitting buildings with air conditioning could potentially result in a fee for travelers to help cover the new costs associated with it.

Unfortunately for all of us, extreme temperatures are becoming the norm in many destinations, including here in the U.S.

“This summer, with its oppressive and widespread heat waves, it's likely to be one of the coolest summers of the rest of our lives,” U.S. Secretary of Commerce Gina Raimondo said during a press briefing in July. The statement was in connection with the Biden administration's rollout of a new website, heat.gov, designed to help U.S. communities prepare, plan and respond to hotter temperatures.

Even though air conditioning is a common amenity we have come to expect in the U.S., you can't get around being hot during the summer months, especially if you grew up in the Midwest like me, where the humidity can be brutal at times. If you find yourself in Europe where A/C is less common, there are still some things you can do to manage the temperatures.

To start, do your best to stay hydrated by drinking plenty of water. Plastic water bottles can be hard to find in Europe, so I suggest bringing a reusable water bottle with you. I'm a big fan of my Hydroflask because it keeps the water inside cold for an extended period of time.

Also consider wearing lightweight, sweat-wicking clothing made of a breathable material, such as cotton. You may also want to pack a portable handheld fan and a cooling towel to help you regulate your temperature as you sightsee or spend time in spaces lacking air conditioning. Paper towels can also work in a pinch, though they're not as environmentally friendly and may absorb less moisture, depending on the quality.

Remember to be strategic about when you're outside, too. The sun at generally hottest around 3 p.m., so aim to spend time outdoors early or late in the day. Don't forget to also lather on the sunscreen and reapply it regularly, even when you're flying.

Travelers visiting Europe soon should expect more countries to adhere to temperature limits in public spaces in response to rising temperatures. Know, though, that some hotels still let visitors control the temperatures in their rooms.

To find a place with air conditioning, ask a property directly whether it has A/C. If it does, check and see if there's a charge for using it.

Should your preferred hotel tell you it doesn't have A/C at all and you have flexibility with your schedule, consider adjusting your travel dates so they fall outside the summer months. Not only will you encounter cooler temperatures when you visit during the offseason, but you'll also face fewer crowds while paying less for accommodations.

For more tips on how to navigate extreme temperatures while traveling in Europe, read:

Featured image by Anadolu Agency via Getty Images
Editorial disclaimer: Opinions expressed here are the author’s alone, not those of any bank, credit card issuer, airline or hotel chain, and have not been reviewed, approved or otherwise endorsed by any of these entities.