Articles
Ethan Steinberg has been a frequent flier for as long as he can remember. He went from studying abroad in Paris to moving to Shanghai after graduating college, where he covered all things travel in the Asia-Pacific region for TPG.
Nov. 16, 2019
•
9 min read 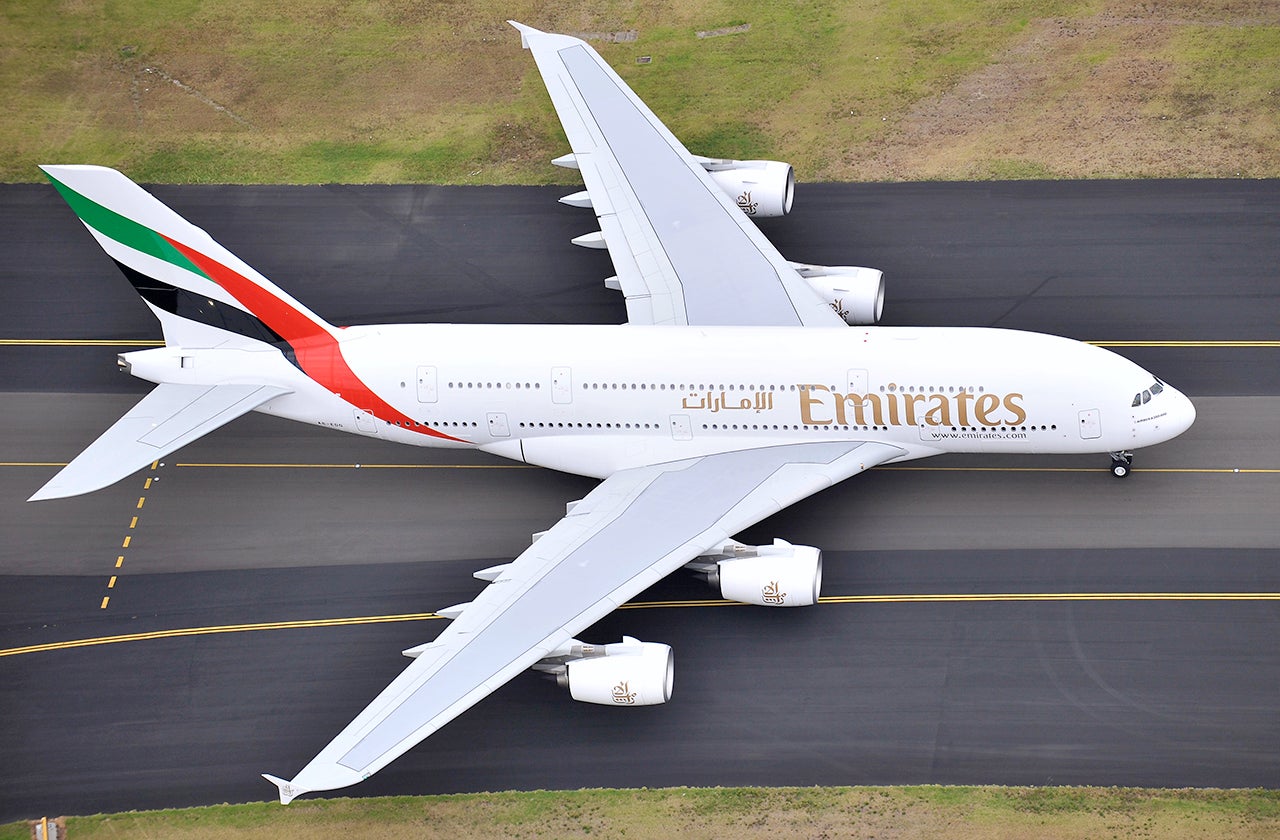 Emirates president explains why other airlines have struggled to make the A380 work
This post contains references to products from one or more of our advertisers. We may receive compensation when you click on links to those products. Terms apply to the offers listed on this page. For an explanation of our Advertising Policy, visit this page.

Over the years, the Airbus A380 has become practically synonymous with Emirates Airline. By the time the Dubai-based carrier takes delivery of its last superjumbo jet in 2021, Emirates will have operated more than half of all the A380s ever produced, or about 120 in total. By comparison, the next largest A380 operator is Singapore Airlines, which only ever ordered 23 of the double decker jets.

Emirates president Tim Clark recently explained in an interview with AirlineRatings why other airlines haven't been able to find the same success with the A380, as reported by One Mile At A Time. Clark is a veteran of the aviation industry, and the man most responsible for turning Emirates into the global heavyweight it is today. Here's what he had to say:

The CEO of Air France has recently disqualified the A380 as having always been difficult and now obsolete. What is your take on this?

Clark: The A380 was a misfit for Air France. They never scaled, they only have ten aircraft. Yes, we faced the same teething problems, but we dealt with them because we were scaled enough to deal with it. If you’ve got a sub fleet of 10 it’s a bloody nightmare and the costs go through the roof, [Anne Rigail] is absolutely right. But if you got a hundred of them it’s a bit different. Your unit costs in operating with that number are a lot lower than having just ten. Secondly, look at their interior. What did they actually do to shock and awe their market community with that A380 when it came to market? Why was it that it was Emirates, who took it after Singapore Airlines, that it lit up the planet in terms of showers and bars and big TV screens? We did it for a very well calculated reason. Not to blow our trumpet. But simply we had taken a huge risk and huge investment. To belittle that investment by putting in a Business Class seat of 1990s-think and a First Class of 1980s-think and Economy Class seating and IFE of 1990s-think was not something we would have done, like Air France. The whole approach to the A380 at Air France and Lufthansa was ‘just more of the same.’ They lost the opportunity to really define it. They never ordered any more. British Airways didn’t order any more. BA should have had the same number of A380s as we have, hundred of those. They got 62 million people in the UK and a congested Heathrow hub, that should have worked easily.

Clark hits on a few key points here, starting with economies of scale. Each new aircraft type, or "sub fleet," that an airline introduces requires new equipment, replacement parts and mechanics who are specially trained to work on that type of plane. When you have over 100 of the same aircraft type you can spread some of those fixed costs out, making each plane cheaper to operate. This is the same strategy Southwest uses with its all-737 fleet, though you can imagine how much more expensive each part for the mammoth A380 is.

Further Reading: Inside North America’s only Airbus A380 hangar

Clark's second point has to do with the interior of the aircraft, an area where Emirates undeniably excels. Emirates first class aboard the A380 isn't the most spacious seat on the market (especially compared to Singapore Suites or Etihad Apartments), but Emirates does the best job utilizing the extra space that the A380 affords. First class on Emirates' A380s is located at the front of the upper deck. In front of the cabin, you'll find two massive bathrooms that double as onboard shower suites, complete with heated floors.

Meanwhile, at the back of the upper deck, you'll find a walk-up bar that's accessible to both first and business class passengers. This is a great excuse to get up and stretch your legs on a long flight, and either socialize with your travel companions or meet someone new.

While other airlines offer onboard showers or lounges, none do it as well as Emirates or on the scale of Emirates' massive A380 route network. These luxurious and unique amenities are a direct contrast to some of the airlines that Clark calls out. The question he was asked specifically references Air France, which holds the dubious distinction of being the only airline where passengers should actively seek to avoid flying on the A380. The exposed seats in first class lack privacy and would be better suited for a business class cabin ...

While the 2-2-2 angle-flat business class seats are simply not competitive in today's market.

Further Reading: Sièges Antiques: A Review of Air France’s A380 in Business Class From Paris to New York

Other airlines like Lufthansa and British Airways aren't as bad, but the first and business class cabins they offer on their A380s are nearly identical to what you'll find on planes in their fleets. Neither one of these airlines makes use off the extra space on the A380 to offer any type of unique amenity like a bar or shower.

Under Clark, Dubai (DXB) has grown into one of the world's busiest airports by passenger traffic each year, in large part because Emirates is able to fill most of the seats on the jumbo jets it operates. His last point, therefore, is perhaps the most scathing. London Heathrow (LHR), which is British Airways' main hub, is a notoriously slot constricted airport. This means that airlines can't just add new flights as they please, they first have to purchase a takeoff and landing slot. These slots have gotten outrageously expensive in recent years, with airlines such as Oman Air and Scandinavian Airlines paying over $75 million for a pair of takeoff and landing slots.

The simple answer, it would seem, is to fly larger planes instead of operating more flights. Clark is implying that if British Airways would fully commit to the A380 instead of sticking to a small sub fleet of 12 aircraft, it could enjoy the same success that Emirates has had with these planes.

Clark and Emirates Airline have long been the A380s biggest (and at times, only) supporters. While Clark might be right that other airlines haven't been able to maximize the A380 in the same way Emirates did, that's partly because of two major shifts in the aviation industry.

Airlines are moving away from the "hub and spoke" model that requires passengers to connect through major hubs on international flights, and launching more direct service to secondary markets, such as British Airways' London to Nashville (BNA) flight, or Singapore's nonstop flight to Seattle (SEA). While these routes might be able to support enough traffic for a smaller aircraft like a 787 or A350, they certainly can't fill an A380 every day.

This change is partly being driven by airlines moving away from double-decker four-engine jets and opting for smaller and more fuel efficient next generation aircraft instead. Economies of scale aside, it's much cheaper to operate a 787 or A350 than an A380 on a per-mile basis. Emirates was the lifeline of the A380 program for most of its existence, but even Emirates has decided to embrace this change, opting to order 40 787-10s, 30 A350-900s and 40 A330-900neos to replaces its A380s. In fact, A380 production will permanently end in 2021 when Emirates takes delivery of its last A380.

Last but not least, Emirates has two unique advantages that give it the ability to scale the A380 in a way that other airlines can't. The first is Dubai's geographical position, and role as a connecting hub between the east and the west. If you're an American passenger flying Emirates from the US to South Africa, for example, there's a chance that you'll be on an A380 for both legs of the journey. Contrast this with a domestic connection on a 737, before hopping on a widebody plane to reach your final international destination. Additionally, Emirates has access to incredible amounts of government funding that allowed it to take a risk on such a large plane order. At list prices, Emirates total A380 fleet would have cost nearly $55 billion, and most airlines can't pull together that type of credit package (however, airlines rarely pay list prices and often negotiate substantial discounts).

While it’s easy to look back and say that every airline could’ve achieved the same success Emirates did with the A380 if they’d fully committed to the aircraft, the truth is Emirates took a huge gamble with these planes and they’re lucky that it paid off. Not only did they grow the airline and hub airport into one of the world’s largest, but the innovative and over-the-top A380 cabins have squarely cemented Emirates’ place as one of the world’s true five-star airlines.