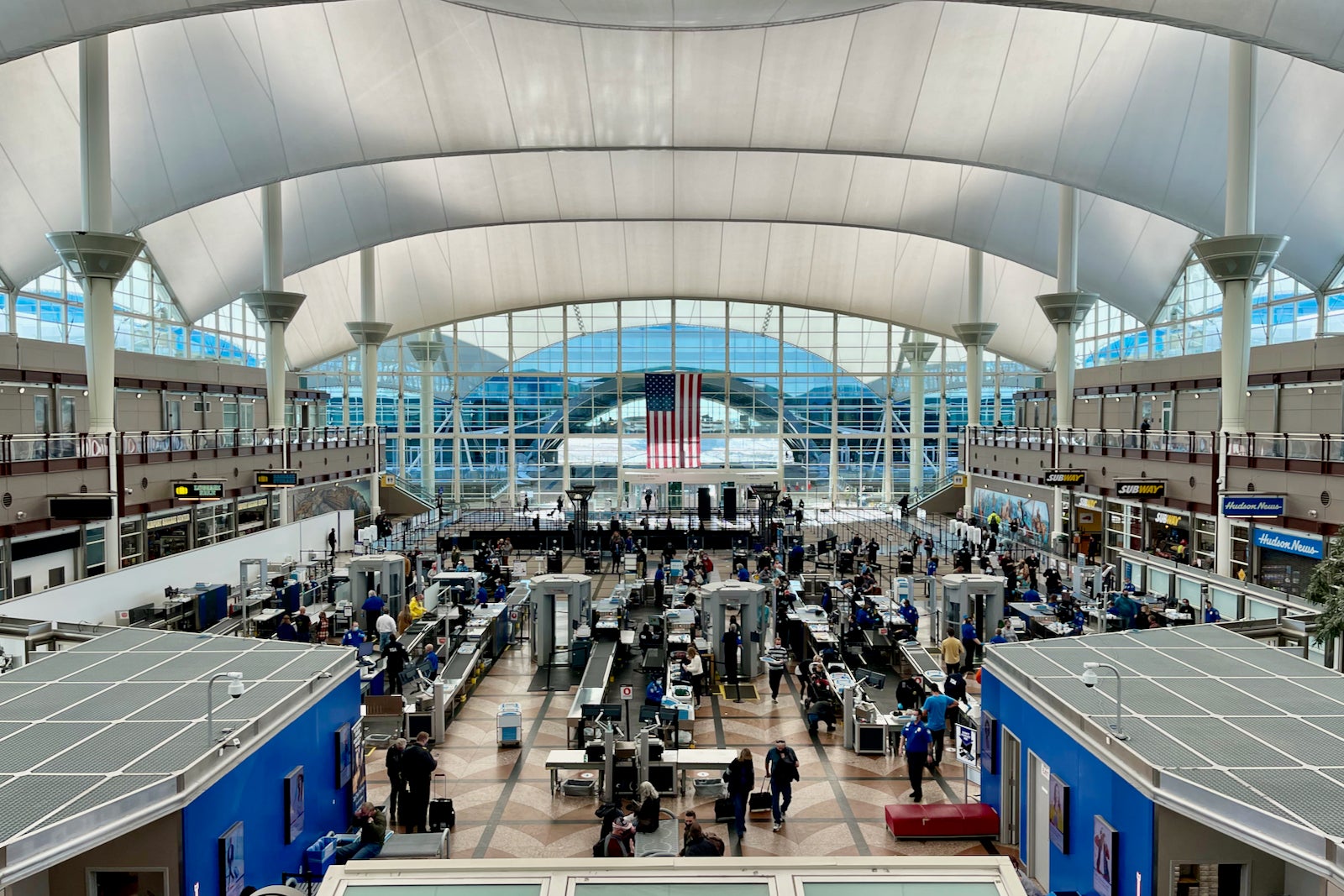 If you've flown through Denver recently, odds are that you've noticed the ongoing construction. When the airport first opened in 1995, it was designed to handle 50 million annual passengers. In 2019, Denver welcomed more than 19 million more than its original capacity, and the airport is hoping to grow to at least 80 million annual passengers by 2025 (depending on the trajectory of the pandemic recovery).

Having outgrown its current infrastructure, the airport is undergoing a massive expansion program, split between two projects. In February 2021, I spent a day in Denver touring the construction.

Since then, progress has been made, moving along the construction over to the meet and greet area, adding walls to the center of the terminal on Level 5. Starting Wednesday, June 23, passengers will find new flooring and revamped bathrooms on both sides of the train exit in the Jeppensen Terminal.

The airport is building 39 new gates, increasing capacity by 30%, in a project that will lengthen each of Denver's three passenger terminals with new gates, concessions, outdoor decks and more.

As Stu Williams, senior vice president of Denver’s airport expansion told TPG: "In essence, we are starting to fulfill the ultimate configuration of the airport on the existing A, B and C concourses."

The first extended concourse — Gates B7 to B12 in B West — opened in November and serves as a preview of what's to come for the airport.

Expect light-drenched hallways, thanks to expansive floor-to-ceiling windows, overhauled bathrooms and a variety of seating areas.

Related: Your inside look at Denver Airport's new terminal expansion

By the end of 2021, construction will be complete on the next concourse extension, C East. I toured the work in progress, and things are definitely coming along.

The C East expansion will feature 16 new gates, all leased to Southwest. The new building will connect seamlessly with the existing concourse; once construction is finished, the temporary wall dividing the two areas will be demolished.

Like the new B West gates, the C East concourse will enjoy more daylight with its full-length windows and taller ceilings.

There will be a new wayfinding system with updated digital signage, too.

The terminal will also have wider hallways, which should hopefully help relieve some of the congestion during peak departure and arrival banks.

C East will also be home to the airport's second outdoor deck with fireplaces, pet relief area, bar and all-weather seating. It'll face the nearby prairie and runways 17L and 17R.

One downside to the extension will be the trek from security. Once complete, the extended Concourse C will be approximately 1,155 feet long. If you're departing from one of the furthest gates, you could hit your daily step goal before departure.

In addition to C East, construction is also ongoing on the Concourse A-West and B-East extensions. Both of these projects are also slated for completion by the end of the year.

According to Williams, "there were some COVID impacts that we had to overcome. The supply chain was not as reliable and crews have been quarantined. We've maintained an aggressive schedule throughout the pandemic and we're opening on time."

In addition to extending the gate area, the main departure hall is also getting an overhaul. Phase 1 of this project will be complete by the end of the year — great news for those who've been inconvenienced by the ongoing work for the past few years.

Starting June 23, passengers will walk North toward pick-up, baggage claim and ground transportation rather than South to the arrivals area, where the rest of Phase 1 will remain.

The 16,000-square-foot Great Hall expansion will include a renovated check-in area on Level 6. Once complete, the check-in area will offer 86 self-bag-drop counters, boosting efficiency and throughput by roughly 30%.

There will also be a re-packing station with scales in the central check-in area should you need to shift the contents of your bags. The new ticketing pods will be split between Southwest and United, the airport's two largest tenants.

When south security moves, the space it currently occupies will be turned into a new meet and greet area with concessions and other amenities.

Despite the pandemic, construction at Denver Airport is ongoing. The next time you transit through the airport, you might even notice some of the improvements, especially if you're departing from Concourse B West.

With 39 new gates and a renovated Great Hall coming soon, it won't be too much longer until the overhauled and improved Denver Airport is ready for prime time.