Some people are delaying travel plans over delta variant fears, according to study 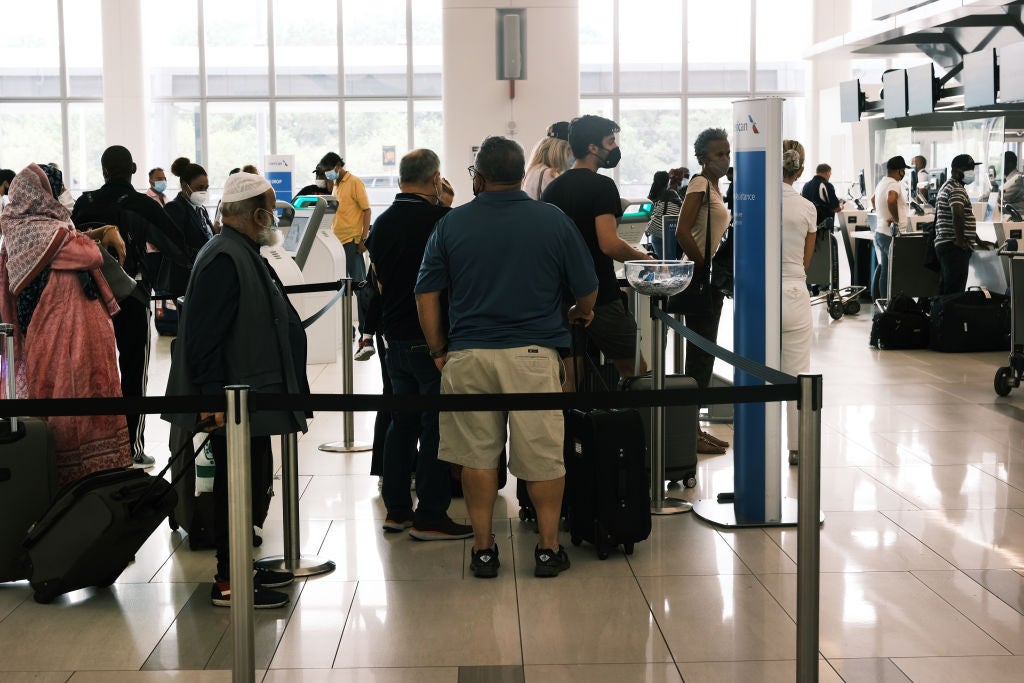 The highly transmissible delta variant, first discovered in India, is the dominant strain of SARS-CoV-2 in the U.S. and has been detected in dozens of countries. It's been observed as 50% to 60% more contagious than the alpha variant that drove the pandemic this winter.

Even with concerns about the delta variant, domestic air travel doesn’t appear to be significantly affected, at least not yet. Domestic demand has reached pre-pandemic levels, and the Transporation Security Administration now regularly screens over 2 million passengers a day. The U.S. hotel industry in June recorded its highest monthly occupancy and revenue per available room since October 2019, an indication that Americans are more comfortable traveling again.

But fears of the delta variant could upend the travel industry’s recovery. Here's what you need to know.

Travelers were also concerned about opening their communities to tourists; support for outside visitors dropped from nearly 70% in early June to 57% in July.

“We may be approaching a new pandemic tipping point, in the battle between the more transmissible Delta variant and the power of vaccinations to prevent or at least lessen the impact of infections,” Longwoods International CEO Amir Eylon said in a statement.

The travel industry is monitoring the variant’s spread, people in the industry told TPG, but they aren’t overly concerned that the variant will result in a return to March 2020-era restrictions. But so far, the variant hasn't been a problem for any U.S. carrier, as the major U.S. airlines have all said. And current travel numbers and future bookings are continuing to trend upward.

“We haven’t seen any impact at all on bookings, which continue to get stronger week after week,” United CEO Scott Kirby said during the company’s second-quarter earnings call this month. “We think the most likely outcome is that the continued recovery in demand continues unabated.”

The travel industry might not be too concerned about the delta variant’s impact on business but across the United States, restrictions relaxed after initial high vaccination rates are returning.

The U.S. Centers for Disease Control and Prevention issued updated mask guidance on July 27, including recommending people in high-risk areas wear masks indoors, regardless of vaccination status. This recommendation is in line with the World Health Organization’s warning that even fully vaccinated individuals — those who received their final dose of the COVID-19 vaccine at least two weeks prior — should still wear a mask.

“In areas with substantial and high transmission, CDC recommends fully vaccinated people wear masks in public indoor settings to help prevent the spread of the delta variant and to help others,” CDC director Rochelle P. Walensky said in a media briefing on Tuesday.

The recommendation comes after increased reports of infections in the United States due to the delta variant in fully vaccinated individuals and in areas whose population remains largely unvaccinated. However, it’s important to note that the CDC stopped short of issuing a full mandate, instead calling the update a “recommendation.”

The new guidance reverses the CDC decision in May that said vaccinated persons no longer needed masks indoors. At the time, the agency cited scientific evidence that suggested vaccinated people remain less likely to become infected with or transmit the virus and that the vaccines had provided protection against the variants.

With the agency's new recommendation, hotels may have to take a renewed look at their mask policies.

Major hotels, including Marriott, Hilton and Hyatt, relaxed their mask requirements after the May guidance which said vaccinated people no longer needed to wear masks indoors. But hotels that have updated guidance are largely following the CDC's lead in merely suggesting — not mandating — mask-wearing for fully vaccinated guests.

"All hotels are required to follow state and local requirements, if stricter than Hyatt’s recommended guidance," the spokesperson said.

A Hilton spokesperson told TPG that fully vaccinated Hilton employees in the U.S. are only advised to wear face coverings if they are based in high-transmission areas.

"We will continue to evolve our approach with a focus on the wellbeing of our guests and team members, always informed by the applicable regional health and government authorities," the spokesperson told TPG.

A Marriott spokesperson told TPG that the chain didn't have an update.

A spokesperson for the American Hotel & Lodging Association, an organization that collectively represents 80% of all franchise hotels, told TPG that it encouraged hotels "to monitor (their) specific location and act accordingly."

"The circumstances for a change in mask requirements are local, not national, and may be temporary depending upon location," the AHLA spokesperson told TPG.

Some destinations return to requiring masks in public, indoor settings

But several jurisdictions didn’t wait for the CDC’s recommendation, instead recommending or enforcing mask mandates independently. For instance, in mid-July, Los Angeles County announced that all people — vaccinated or not — would be required to wear a mask indoors when in public. Other areas of California recommended that everyone wear masks indoors at public places but stopped short of making masks a requirement.

And in Sin City, Las Vegas employees who work indoors are now required to mask up again, as local officials try to contain the concerning upswing in COVID-19 cases related to the delta variant.

The requirement comes as several jurisdictions, including Chicago and the island of Kauai in Hawaii, have advised their residents to avoid travel to Las Vegas or Nevada due to high rates of positive COVID-19 cases. Clark County, which includes the city of Las Vegas, has seen a surge in positive cases. The CEO of MGM Resorts urged his employees to get vaccinated against COVID-19 and feared a "return to social distancing and capacity restrictions" could be on the horizon if conditions in Las Vegas didn't improve.

Other jurisdictions have indicated that they aren’t as keen on enforcing a mask recommendation or mandate.

New York Gov. Andrew Cuomo is reportedly considering requiring masks in places with a high risk for COVID-19 transmission. Such a requirement will likely irk New York City Mayor Bill de Blasio, as the two men have a publicly contentious relationship. De Blasio has previously said that the city would not require face masks indoors. The mayor touted the city’s rebound from the coronavirus, which slammed into New York City early in the pandemic and killed thousands. After mounting an early vaccination campaign, the city was declared “fully reopened.”

However, de Blasio recently ordered that New York City employees who are unvaccinated would be subject to weekly COVID-19 testing.

Some countries are reopening, while others remain shut

Even with the delta variant’s spread, some countries are moving ahead with reopening plans.

England announced that it would allow fully vaccinated travelers from the United States and European Union to enter its borders without quarantine, a move expected to boost the tourism industry. Canada on July 19 said it would reopen its borders to fully vaccinated U.S. citizens beginning on Aug. 9, the first phase of a two-step reopening process. Canada also said it intends to open its borders to citizens of other countries as of Sept. 7 if the conditions didn’t deteriorate. Singapore has indicated that it hopes to ease restrictions in September if 80% of the population is vaccinated.

As countries close and far away reopen, the United States will remain firmly shut — at least for now. The U.S. said that it wouldn’t lift any of its existing travel restrictions “at this point” over concerns about the delta variant. Most non-U.S. citizens of China, Iran, the United Kingdom, Ireland, Brazil, South Africa, India and Schengen Area countries are banned from entering the United States.

“British government leaders have made a wise decision in reopening England to vaccinated travelers from the United States,” said Tori Emerson Barnes, executive vice president of the U.S. Travel Association, in a statement in response to the U.K.’s announcement that it would reopen to vaccinated Americans.

“It’s time for U.S. leaders to do the same and set a timeline to reopen our national borders—and we encourage them to start with vaccinated travelers from the U.K., E.U. and Canada.”