Articles
Summer Hull , aka Mommy Points, ran the Mommy Points site for families who want to travel more for less using miles and points for seven years. She now heads up a variety of special projects at TPG when she isn't exploring the world with her own two girls.
Follow
Feb. 08, 2022
•
8 min read 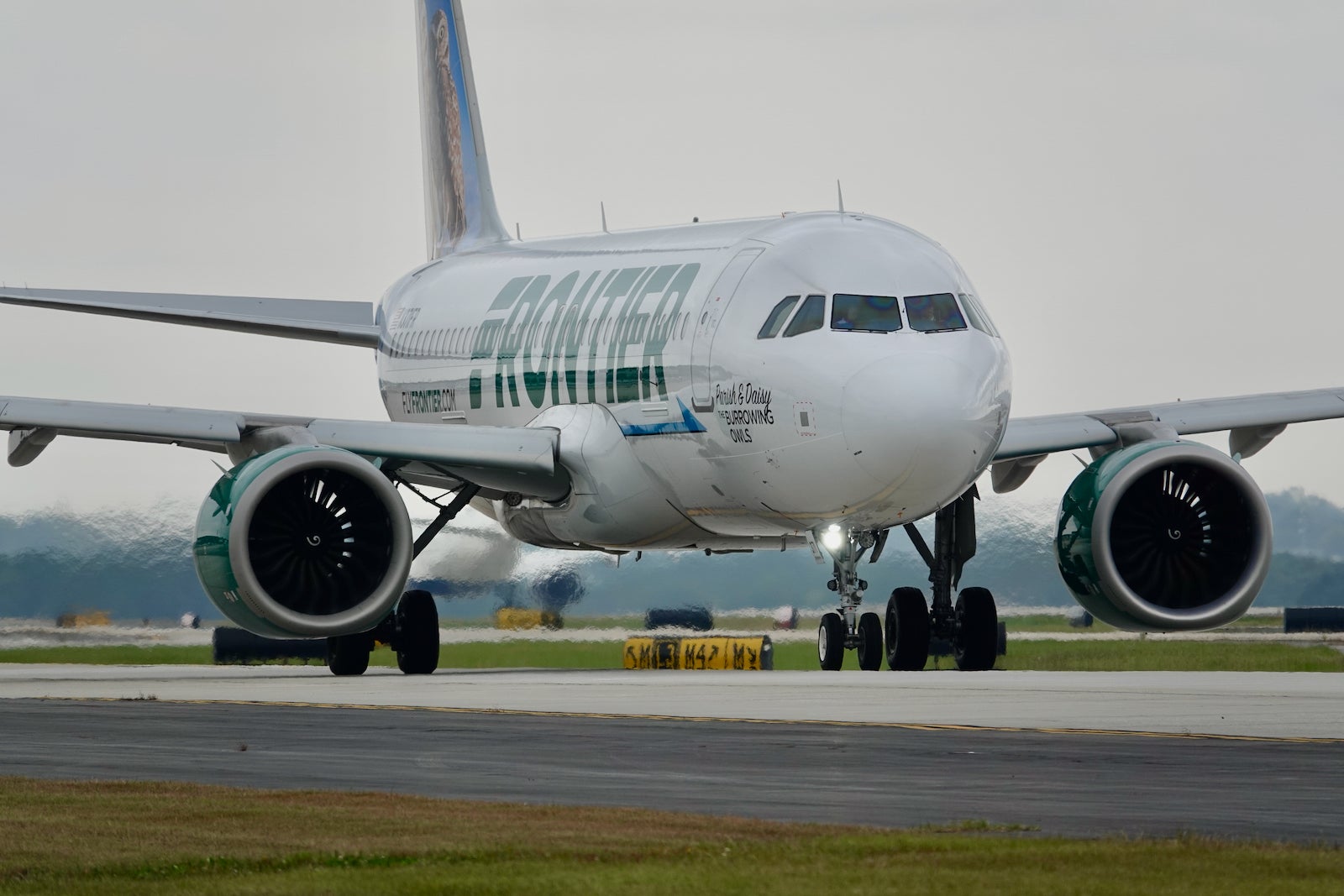 One likes yellow planes, has first-class sized Big Front Seats and a route network heavy on the Caribbean and the eastern U.S.

The other likes animals, has a more subdued approach to cheap airfare and is stronger in the west.

Both have an a la carte approach to how you purchase your travel, run membership programs and have relatively recently revamped their frequent flyer programs. Now these two divisive airlines — Spirit and Frontier — have shared their desire to become one large low-cost airline. If the merger occurs, the combined airline will become the nation's fifth-largest, serving more than 145 destinations.

While Spirit and Frontier are certainly more similar than they are different, they are not the same airline by different names. Each brings with it some unique approaches to low-cost airfare.

While I am nervous about the risk of higher fares in the low-fare market with decreased competition between these similar carriers if the merger is approved, I’m also excited about the potential.

I’ve long loved both Spirit and Frontier when price and schedules align, and I’m intrigued with the prospect of what the combined route network could offer ... especially when it comes to a combined frequent flyer program.

The Free Spirit frequent flyer program was just overhauled in early-2021. It did away with award charts but introduced true frequent flyer perks to correspond with its two elite status tiers: Silver and Gold.

Normally doing away with award charts in favor of dynamic pricing is terrible news to frequent flyers, but in this case, it was actually OK. Tying award prices to Spirit’s usually low cash fares actually increased the value of its miles from 0.4 cents per mile to about 1.1 cents per point in our tests.

At the Gold level, having access to complimentary seat assignments (but not the Big Front Seats), a free carry-on bag and a snack and beverage on board makes the experience feel like basically all the major U.S. airlines.

The biggest problem with this otherwise pretty solid offering, given the airline’s fee structure, is that the perks don’t extend to anyone else on your reservation. This makes them more beneficial to small business travelers than leisure travelers, which is interesting given Spirit's overall approach to travel.

There also is no pathway to the Big Front Seat with status, though all other seats on the aircraft are available at no extra fee with Gold status. This missed opportunity to offer a very valuable benefit could be solved with another tier of benefits over the current two-tiered structure.

And as it happens, Frontier already has a three-tiered elite status system.

Related: I flew Spirit home with $3 WiFi and it was great

While you can spend your way to even top-tier status with Frontier just like you can with Spirit, Frontier’s program is actually most similar to a traditional frequent flyer program. Frontier still has an award chart and awards miles based on distance flown — not dollars spent. That places it as one of the few left in the country that does it that way.

Frontier has three elite status tiers: 20k, 50k and 100k. Solid benefits like free carry-on bag and seat assignment kick in at the 20k level — and extend to others on the reservation at the 50k level.

While Spirit has the wing up when it comes to some elements of the frequent flyer program and in-flight experience, Frontier stands above when it comes to the elite status perks being most applicable on a typical leisure trip.

What a combined Spirit and Frontier program could look like

While a combined program could differentiate itself from the pack by keeping the miles earned based on the miles flown approach that Frontier uses, I’d put those odds at slim.

I see it far more likely that they would take Spirit’s approach and award miles based on how much you spend on everything from the base fare to seat assignments, with amounts that increase as you increase in status levels.

Speaking of status levels, Frontier’s three tiers of status may be the way to go, with perks extending to others on the reservation starting at the mid-tier level.

The top tier could be made even more enticing with some sort of Big Front Seat inclusion. If the economics didn’t work to offer it outright at the time of booking, since it is a real stand-alone revenue driver, it could be considered as a space-available check-in option, be given as an annual upgrade certificate or even offered at a 50% discount for top-tier members.

Either way, Frontier currently has extra legroom rows (named Stretch Seating) and Spirit has the Big Front Seats, so those should be used in some way as a carrot at the top-tier levels.

And since both airlines already allow you to earn elite qualifying miles at a rate of 1 dollar per 1 dollar charged to their respective co-branded credit cards, it is a reasonable assumption that that would remain unchanged in a combined program.

Both also already have a membership club that provides access to discounted fares, among other things.

Frontier offers this Discount Den membership to its top-tier members while Spirit does not with its Spirit Saver$ Club. However, if there is a third tier in the future for a combined program that Spirit participates in, then there could be room for that perk at the top.

When it comes to award prices, Spirit may have the better approach for an ultra low-cost carrier with awards starting at just 2,500 points for each direction of travel. However, on the flip side, that same route could cost 40,000 points per direction of travel, so there's a downside to dynamic pricing.

With Frontier, that same route to Orlando is never going to cost less than 10,000 miles but it's also never going to cost more than 20,000 - 22,500 given the award chart. There are pros and cons to each approach, but cheap award flights that start cheaper and are dynamically priced tied to the fare are probably more on-brand for a combined Spirit and Frontier frequent flyer program than a traditional award chart.

A combined frequent flyer program from a Spirit and Frontier merger could become much more interesting than the individual programs of either airline as they stand. Less than 20% of the airlines' routes are duplicative, meaning that this would really open up a lot of additional flight options for those in a larger frequent flyer program.

Low-cost airlines are never going to be for everyone, but $25 fares are certainly enticing in the right situation. And if Spirit and Frontier combine the elite status tiers and benefit model of Frontier with the low-cost award flights from Spirit, with some new perks sprinkled in, this could be the start of a very interesting opportunity for several time per year low-cost travelers.

Even if you'd never have enough trips on just Spirit or just Frontier, that scale could tip with a suddenly much larger combined network. All of the sudden, elite status could be within reach. That's especially true if they lean into the spend-your-way-to-status opportunities with their co-brand credit cards and partners.

It will be a while before we learn any official details of a combined Free Spirit/Frontier Miles program, assuming the merger comes to pass, but that won't stop us from thinking through the possibilities with a larger route network, more elite status tiers and the opportunity to pull from the best of two airlines that truly have opened up the sky to travelers who otherwise wouldn't be able to fly nearly as often.

Related stories
Chasing elite status on Alaska Airlines? A flight to California this fall could help
The ultimate guide to earning elite status with United cards
American Airlines forgot it had landing slots at JFK. Then it lost some of them
After 19 months, United Airlines is officially suspending flights at New York's JFK airport — again
Featured image by (Photo by Zach Griff/The Points Guy)
Editorial disclaimer: Opinions expressed here are the author’s alone, not those of any bank, credit card issuer, airline or hotel chain, and have not been reviewed, approved or otherwise endorsed by any of these entities.

Our points-obsessed staff uses a plethora of credit cards on a daily basis. If anyone on our team wouldn’t recommend it to a friend or a family member, we wouldn’t recommend it on The Points Guy either. Our opinions are our own, and have not been reviewed, approved, or endorsed by our advertising partners.
See all best card offers
Related stories
News
Chasing elite status on Alaska Airlines? A flight to California this fall could help
Guide
The ultimate guide to earning elite status with United cards
News
American Airlines forgot it had landing slots at JFK. Then it lost some of them
News
After 19 months, United Airlines is officially suspending flights at New York's JFK airport — again