Articles
David Slotnick is a senior aviation business reporter at TPG. He covers anything and everything to do with the business of running an airline.
Follow
Feb. 07, 2022
•
6 min read 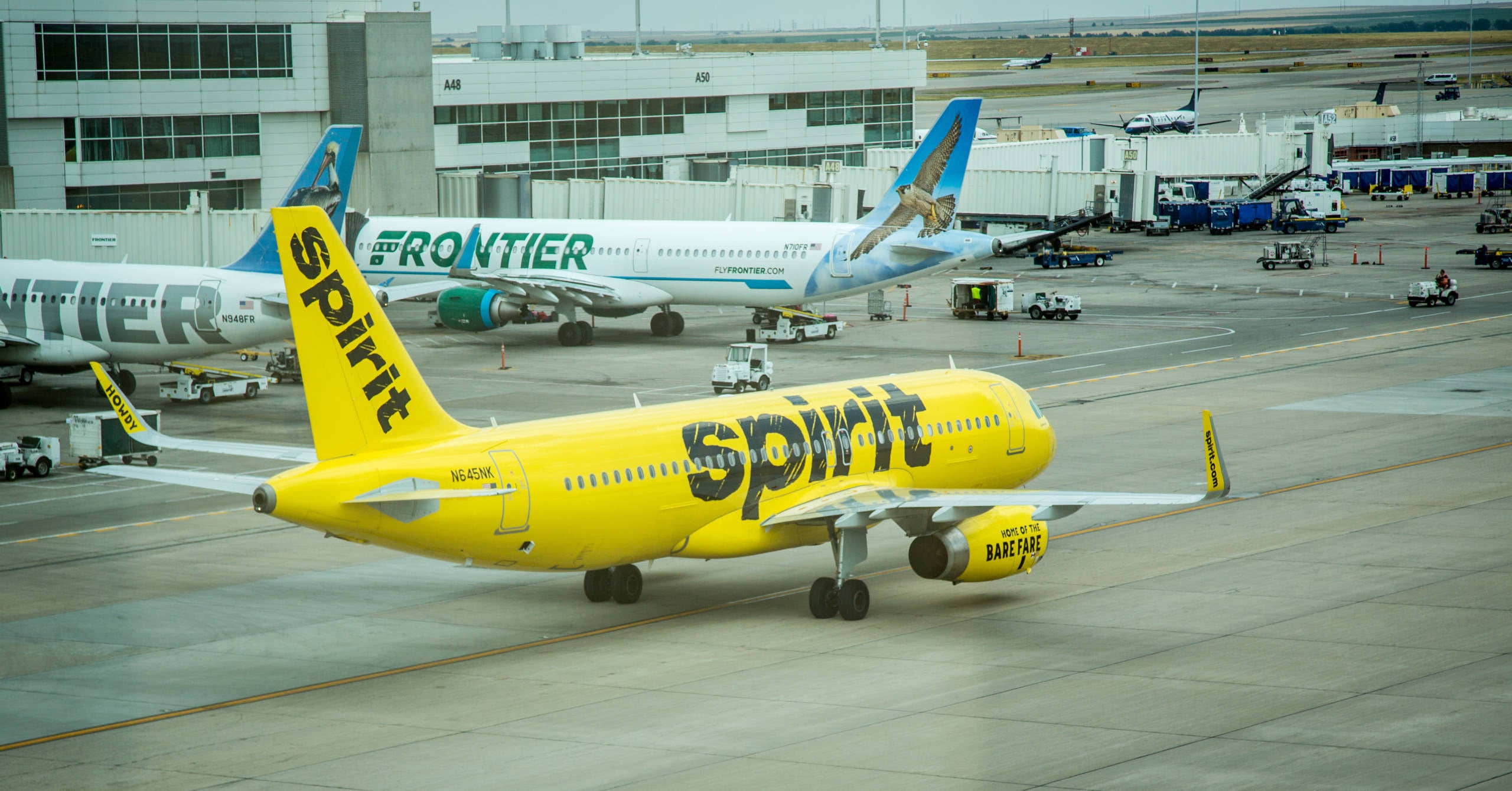 Frontier and Spirit airlines unveiled a blockbuster merger Monday, announcing plans to combine operations and fly as a single company.

The move marries two ultra-low-cost carriers that have complementary fleets and route networks. If approved, it would create an ultra low-cost juggernaut that would dominate the segment in the U.S.

Monday’s announcement gave few details on the consumer-facing make-up of the new airline, including whether Frontier and Spirit will continue to exist as separate brands, combine under one of the existing brands or combine under a new airline. Spirit CEO Ted Christie said in an appearance on CNBC Monday morning that the combined company’s name and headquarters location will be revealed “in due time.”

Frontier and its private equity firm parent company Indigo Partners are expected to take a leading role in the company’s management. The airlines said that Frontier equity holders will own roughly 51.5% of the combined airline, while Spirit will own 48.5% after closing.

Currently, Frontier is headquartered in Denver while Spirit is based in Miramar in South Florida, while Indigo Partners is based in Phoenix.

Indigo Partners was previously the majority shareholder of Spirit Airlines, but divested its stake in July, 2013. The company purchased Frontier towards the end of the year.

Impact on prices and consumers

Both airlines framed the merger as a win for everyone affected, including customers.

"I'm confident that today's announcement will change the industry for the benefit of consumers, shareholders, as well as the team members for both Spirit and Frontier," Bill Franke, chairman of Frontier's board and managing partner of Indigo Partners, said during an investor presentation on Monday.

"This transaction will take us from the event and eighth-largest airlines in the United States by [available seat miles] to fifth, enabling us to be a more effective alternative against the 'big four,' among others," Christie said during the presentation.

"When you combine this with the fact of our greater scale and our low fares, we become an even better option for consumers," he added.

Frontier had about 2% of the U.S. commercial air travel market by capacity in 2021, while Spirit owned about 3% of the market, according to Cirium.

The combined airline would serve upwards of 145 destinations with more than 600 nonstop routes across the United States, Latin America and the Caribbean, the airlines said.

"The combined airline will also have the ability to succeed in cities our companies have previously exited such as Jackson, Mississippi, as well as expand into new small cities like Eugene, Oregon," Christie said.

By combining resources and coordinating their schedules, particularly in cities where the airlines overlap, the post-merger airline "will be able to utilize efficient scheduling and high utilization to drive ultra-low-costs," he added.

Although the airlines operate in many of the same markets, only 519 of their combined 2,832 routes overlap, or 18%, according to data from Cirium.

The combined fleet would also help the airlines recover from operational disruptions, Christie said, something that low-cost carriers have had particularly difficult times managing.

"The combined airline will offer strengthened operational reliability through a variety of efficiencies," Christie said. "Further, with a larger combined fleet and deepened services to cities across the United States, we will be better positioned to improve recoverability during irregular operations."

The point was unintentionally underscored on Monday, when Frontier appeared to suffer a complete operational meltdown. The airline's entire fleet was on the ground at noon, ET, according to FlightRadar24. As of 12:30 p.m. ET, 111 of Frontier's flights for the day had been canceled and 112 were significantly delayed — about 44% of the airline's operations for the day, according to FlightAware.

A young and modern fleet

Both airlines exclusively operate the Airbus A320 family of aircraft, making for a relatively easy task integrating the two airlines' fleets.

The combined airlines will operate the largest fleet of A320neo family aircraft in the U.S., Christie said. By the end of 2026, nearly 80% of the airline's fleet will consist of neo aircraft, with older generation A320ceo aircraft making up the remainder.

Indigo Partners signed a purchase agreement for 255 new A320neo-family aircraft at the Dubai Airshow in November, including 91 A321neos designated for Frontier.

"We will be America's greenest airline, operating the youngest, most modern fleet in the United States," Franke said.

One of the most immediate challenges for the new carrier will be winning regulatory approval for the new carrier. A raft of airline mergers reshaped the U.S. industry during the 2000s and 2010s, but there’s thought to be a cooler sentiment from the current administration in Washington after the previous wave of consolidation.

The Biden administration has previously given indications of reluctance to approve mergers and coordination in the airline sector. In 2021, the Department of Justice filed an antitrust suit against American Airlines and JetBlue, alleging that their "Northeast alliance" amounts to unfair, uncompetitive practices.

American and JetBlue have argued that by coordinating in the Northeast, they can better compete against entrenched airlines Delta and United.

It's possible that Spirit and Frontier would use a similar argument. The combined airline would be the fifth-largest in the U.S., behind only American, United, Delta and Southwest. It appears likely that they will argue that the combined size would allow them to compete against the majors, driving fares down across the board.

On the other hand, combining the nation’s two largest ultra-low-cost operators into one would eliminate one of the nation's biggest budget airlines in the process.

Frontier and Spirit addressed that in their merger announcement, pledging that the tie-up would enable faster growth and allow the combined carrier to "compete even more aggressively, especially against the dominant 'Big Four' airlines."

"Our all-in costs for the consumer is the lowest of any airline in the United States, at $108 on average. The big four airlines charge over 80% more than us," Christie said during the investor briefing. "When you combine this with the fact of our greater scale and our low fares, we'll become an even better option for consumers."

"In a competitive industry like ours, the lowest cost always wins, and we're proud to continue to deliver that for our customers day in and day out," he added.

The companies valued the deal at $6.6 billion when accounting for the assumption of net debt and operating lease liabilities.

This story has been updated to reflect the latest information. Additional reporting by Ben Mutzabaugh.

Featured image by Spirit Airlines and Frontier Airlines planes at Denver. (Photo courtesy of Denver International Airport.)
Editorial disclaimer: Opinions expressed here are the author’s alone, not those of any bank, credit card issuer, airline or hotel chain, and have not been reviewed, approved or otherwise endorsed by any of these entities.