Articles
Chris Dong was a reporter at The Points Guy, where he covered the intersection of credit card rewards and travel.
April 21, 2022
•
9 min read 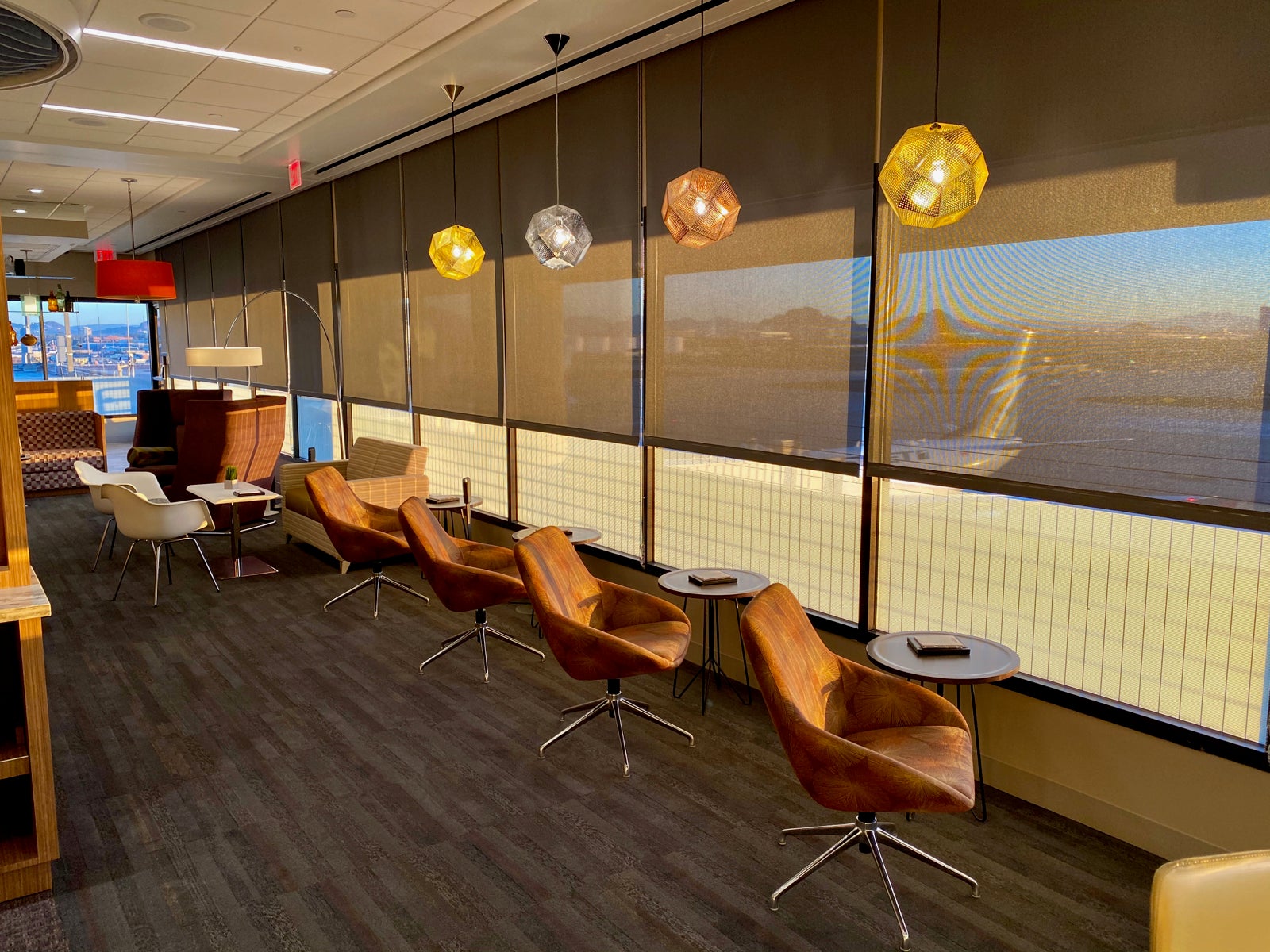 Credit card issuers compete on a lot of fronts, but one area that has been heating up the most is airport lounges.

TPG was the first to report last year that Chase would wade into the fray with its own branded lounges, dubbed “Chase Sapphire Lounge by The Club.” At the outset, there were four planned locations: New York-LaGuardia, Boston, San Diego and Hong Kong.

Since that initial announcement, we've Chase is laying the groundwork for five additional locations: Phoenix, Las Vegas, two yet-unknown locations and the latest announcement of Washington-Dulles.

Although American Express remains the undisputed heavyweight in this arena with its Global Lounge Collection, Capital One has also made a foray into the field with the opening of its first airport lounge at Dallas-Fort Worth (DFW) in November.

Here’s the latest on the upcoming Chase lounges, plus what cardholders can expect when these lounges start opening.

Six Sapphire Lounges are in the works, with the first outpost opening at some point in 2022. Plans call for clubs in the following six airports:

Chase is working in partnership with Airport Dimensions to build out its lounges. Airport Dimensions currently operates over two dozen lounges worldwide, most of which are branded as “The Club” or “Club Aspire” and are largely accessible via Priority Pass membership.

Chase’s lounges are expected to offer more upmarket amenities than you might find in some other Priority Pass locations, including facilities like showers and family rooms, business lounges and both wellness and rest areas.

Although we have yet to see the specific offerings each lounge will have, here’s what we know so far.

Chase's plans to open an outpost in Las Vegas first appeared in public board documents from the Clark County Commission, as first reported by Thrifty Traveler.

At 4,500 square feet, the lounge will be quite small, especially considering how many cardholders will likely have access.

The lease is for a space just past security in the C gates in Terminal 1, which is primarily home to Southwest's operations in Sin City. Travelers flying from Terminal 3 would need to take a train to the C gates to access the lounge.

The Sapphire Lounge in Phoenix (PHX) will be located at the new eight-gate facility in Terminal 4, with the concourse set to open in the summer of 2022. This south concourse will be the home of Southwest Airlines and a connector bridge will link to the north concourses, which includes gates occupied by American Airlines.

Three major players competed for the right to the 3,500-square-foot lounge space, according to Phoenix Airport board meeting documents: Chase with its Sapphire Lounge, Capital One and Escape (in partnership with American Express).

Competition for these types of spaces at busy airports remains fierce, as the number of applicants for this one demonstrates. (Note that there are already two Escape lounges, along with a dedicated Centurion Lounge, located at Phoenix.)

While we don’t yet know of a firm opening date, Chase is expected to commence its contract term in February and begin the build-out of its lounge soon after.

Related: Amex to scale to over 40 Centurion-branded lounges worldwide

In early November 2021, Airport Dimensions (in partnership with Chase) was awarded the contract to build out an 11,000-square-foot lounge in San Diego’s Terminal 2 West.

Chase’s lounge proposal beat out other key competitors, including Escape Lounge (in partnership with American Express), Plaza Premium Group and the Aspire Lounge.

The Chase Sapphire Lounge by The Club has a targeted opening date of November 2023 and will feature “locally inspired design, local food, beverages and art partnerships,” according to San Diego Airport Authority (SDAA) documents.

These same documents indicate that the space, once completed, will be located on the mezzanine level between Gates 46 and 47 and be part of a 10-year lease with a $17.6 million capital investment.

In June 2021, TPG was the first to learn that Chase had been approved to operate a new lounge at Boston Logan International Airport. The 12,000-square-foot lounge will be located in Logan’s currently-under-construction Terminal B to C connector.

According to Massport meeting documents, Airport Dimensions was awarded a 12-year lease at Logan for a new lounge with a $20.4 million capital investment.

Chase’s new lounge at Logan has an anticipated “build-out” date in the first quarter of 2022. According to slides from Massport, lounge amenities will include a wellness area, business lounge, shower suites and a family room.

The Chase Sapphire lounge at HKG will be located in the West Hall of the International Departures area near Gate 40. The lounge will also be accessible for passengers departing from the East Hall via shuttle or a 10- to 15-minute walk. While this lounge was originally expected to open in 2022, continuing COVID-19-related travel restrictions may push this date back.

Details about this location seem the most difficult to find. It will be located in the airport’s new Terminal B, where you’ll also find Amex’s Centurion Lounge (opened in June 2021).

The most recent addition to the list of Chase Sapphire lounges, this location will be approximately 5,200 square feet in size and located in Concourse A, according to the Washington Business Journal. This area is home to many of the international airlines departing from IAD, and lounge plans include two levels, with the lower level being the larger of the two. Plans include a bar, dining area, work area, family room, prayer room and kitchen.

It's worth noting that this location will compete with the planned opening of a Capital One Lounge at the Washington-Dulles airport, slated to open in 2023.

All of Chase’s new lounges are expected to be available to both Chase Sapphire Reserve cardmembers as well as members of Priority Pass. Priority Pass is a perk offered by a wide swath of rewards cards from a number of issuers, including American Express, Citi and Capital One, so it will be interesting to see if folks with premium cards from other banks use them to access Chase’s new lounges.

There’s no word yet on whether folks with other Chase cards, like the Chase Sapphire Preferred Card or the Ink Business Preferred Credit Card, will get access outright, perhaps receive a few one-time passes annually or if they’ll be able to pay for entry.

“Travel has always been important to our customers who aspire for compelling and elevated experiences,” Marianne Lake, co-CEO of Chase, said in August 2021. “We’re investing in meeting our customers where they want to be as more and more of them have the confidence to travel again.”

Aside from simply pleasing cardholders, plotting out a lounge network appears more and more to be a tactic Chase needs to commit to in order to remain competitive in an increasingly crowded field of premium rewards cards, more of which are beginning to offer access to more lounges.

For years, the network of Amex-owned and operated Centurion Lounges was the only major player in the card-run lounge space. In fact, Amex’s Global Lounge Collection, which includes its Centurion-branded spaces, took home the Editor’s Choice prize for best credit card perk at the 2021 TPG Awards.

Just in the past three months, Capital One opened its first airport lounge, operated by the Plaza Premium Group, at Dallas-Fort Worth International Airport. In 2022, Capital One has plans to debut additional locations at Washington Dulles (IAD) and Denver International (DEN).

For its part, Chase will be stepping into the ring with Chase Sapphire Lounges at — so far — six proposed locations, now including Phoenix and Las Vegas. Thanks to Priority Pass, a large number of travelers might have access to these spaces, so we’ll have to see if crowding becomes an issue.