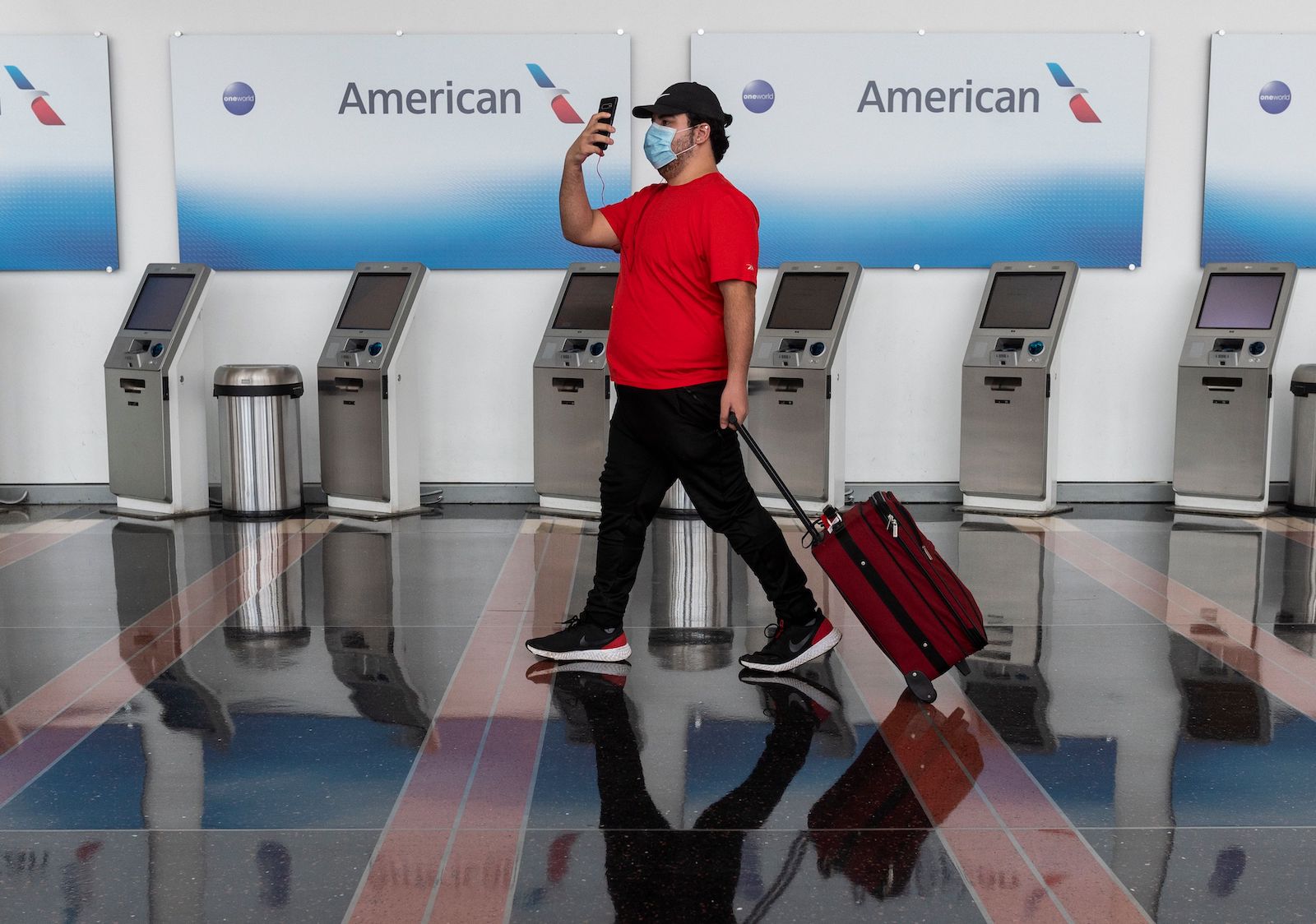 The World Health Organization (WHO) on June 25 warned that even fully vaccinated individuals — those who received their final dose of the COVID-19 vaccine at least two weeks prior — should still wear a mask as the B.1.617.2 strain, also known as the delta variant, spreads.

“People cannot feel safe just because they had the two doses. They still need to protect themselves,” said Dr. Mariangela Simao, WHO assistant director-general for access to medicines and health products.

The U.S. Centers for Disease Control and Prevention (CDC) made waves this week when it issued conflicting guidance. The agency said vaccinated individuals are “safe” from the variant and doubled down on its earlier guidance that fully vaccinated Americans could go maskless.

But amid the fight to end a pandemic that has killed over 600,000 people in the U.S. alone, friction between the two large health agencies has led to uncertainty -- notably as restrictions around the world are loosened.

The WHO’s warning comes as the delta variant of the coronavirus continues to spread worldwide and as travel picks up around the globe. The delta variant is quickly becoming the world’s dominant strain. It has been linked to an outbreak of fully vaccinated adults in Israel, prompting that country to require people to wear masks indoors again. And some countries imposed restrictions on British travelers after an outbreak of the variant in the United Kingdom.

What we know -- and don’t know -- about the Delta variant

The WHO gave a stark warning about the delta variant late last month, saying it would “pick off” the most vulnerable (unvaccinated) individuals. The variant, first discovered in India, is considered “highly transmissible,” according to Johns Hopkins University researchers.

The variant is “more efficient in the way it transmits between humans, and it will eventually find those vulnerable individuals who will become severely ill, have to be hospitalized and potentially die,” said Dr. Mike Ryan, the executive director of the WHO’s health emergencies program, according to CNBC. Twenty-six percent of positive cases in the United States were linked to the delta variant, according to CDC data as of June 19.

The WHO’s recommendation sparked concerns in the U.S., where nearly 60% of adults have been fully vaccinated, but more than half of states fall below the U.S. average. According to Johns Hopkins University, Vermont leads the U.S. in vaccinations, with nearly 60% of residents fully inoculated while just 28% of Mississippians are fully vaccinated.

“If you are vaccinated, you are safe from the variants that are circulating here in the United States,” CDC director Rochelle Walensky told the "Today" show on June 30.

Neither the CDC nor WHO would directly answer an inquiry about whether the two agencies are in communication with each other about mask-wearing. Nor would either directly answer how they drew their conclusions to forgo -- or continue to recommend -- mask-wearing. When asked, a WHO spokesperson directed TPG to a comment Dr. Maria Van Kerkhove, an infectious disease expert, made during a June 30 NPR interview.

“Our guidance is out looking specifically around the vaccines and their ability to prevent transmission,” Van Kerkhove said in the interview.

For its part, it appears as though the CDC is hedging its bets on the effectiveness of the three vaccines currently available in the U.S.: Johnson & Johnson, Pfizer-BioNTech and Moderna. Even with the WHO’s recommendation, the CDC said it had “no plan to update” its guidance, a spokesperson told TPG.

“People who are fully vaccinated are protected, including from the variants currently circulating in the country such as the delta variant,” a spokesperson told TPG. “That is not the case in every country where some of the vaccines they are using are not as effective as the ones we have here in the U.S.”

Dr. Jenny Yu, the senior manager of medical integrity at Healthline Media (which is owned by TPG’s parent company, Red Ventures), citing a May Public Health England study, told TPG earlier this week the Pfizer vaccine was 88% effective in protecting against the Delta variant two weeks after the second dose. Public Health England said it expected to see “even higher” effectiveness against hospitalization and death. Johnson & Johnson said this week its vaccine protects against the variant.

“When and if we will need a booster is still to be determined,” Dr. Yu noted.

What the delta variant means for travel

UK-US corridor is ‘not going to happen soon’

One possibility the travel industry desired -- a corridor between the U.S. and U.K. -- is unlikely to happen this summer.

The Financial Times reported that talks of a travel corridor between the two countries were at a deadlock and unlikely to reach an agreement to open a travel corridor by the end of next month, despite pleas from both travel industry leaders and travelers on both sides of the Atlantic. The delta variant is at least partly to blame for the corridor’s delay, according to reports. The U.K. on Monday reported a nearly 70% increase in new COVID-19 cases from the same period a week prior.

U.S. officials are reportedly concerned about the rise in cases of the delta variant in the U.K., as well as the uncertainty surrounding the effectiveness of the Oxford-AstraZeneca vaccine. And the feeling appears to be mutual: U.K. officials reportedly said a travel corridor between the two countries was “not going to happen soon.”

Several European countries, including Portugal and Germany, imposed restrictions on travelers from certain countries to slow the spread of the virus. Travelers over 18 arriving in Portugal from the U.K. who cannot show full vaccination status must quarantine for 14 days.

And German Chancellor Angela Merkel encouraged fellow European Union countries such as Portugal to tighten restrictions on British travelers due to increasing cases of the delta variant. Germany has already banned British travelers unless they are returning German citizens, residents or have humanitarian reasons to visit. Anyone allowed entry to Germany from the United Kingdom must quarantine for 14 days.

A bipartisan group of U.S. legislators from the Senate Committee on Commerce, Science and Transportation asked the CDC and the Transportation Security Administration (TSA) to review the mask mandate. In a letter to the TSA and CDC, the senators said the committee supported “steps to safely lift restrictions when appropriate.”

“If the requirement for wearing masks while traveling can be safely lifted and would serve the public health interest, then we believe it would benefit the traveling public,” the group wrote on June 30.

But the Association of Flight Attendants-CWA, the union representing nearly 50,000 flight attendants, said it continued to “strongly support” the federal mask mandate, citing the WHO’s recommendation about the delta variant. The union said keeping the mask mandate in place would “help to protect more vulnerable passengers” and others who aren’t vaccinated from the delta variant.

“We certainly look forward to the day that masks are no longer required, but we are not there yet for transportation,” wrote president Sara Nelson in a letter to the heads of the CDC and TSA.

Masks are still required on public forms of transportation for all individuals, including on planes and in airports, through at least Sept. 13.

Featured image by Andrew Caballero-Reynolds/AFP/Getty Images
Editorial disclaimer: Opinions expressed here are the author’s alone, not those of any bank, credit card issuer, airline or hotel chain, and have not been reviewed, approved or otherwise endorsed by any of these entities.