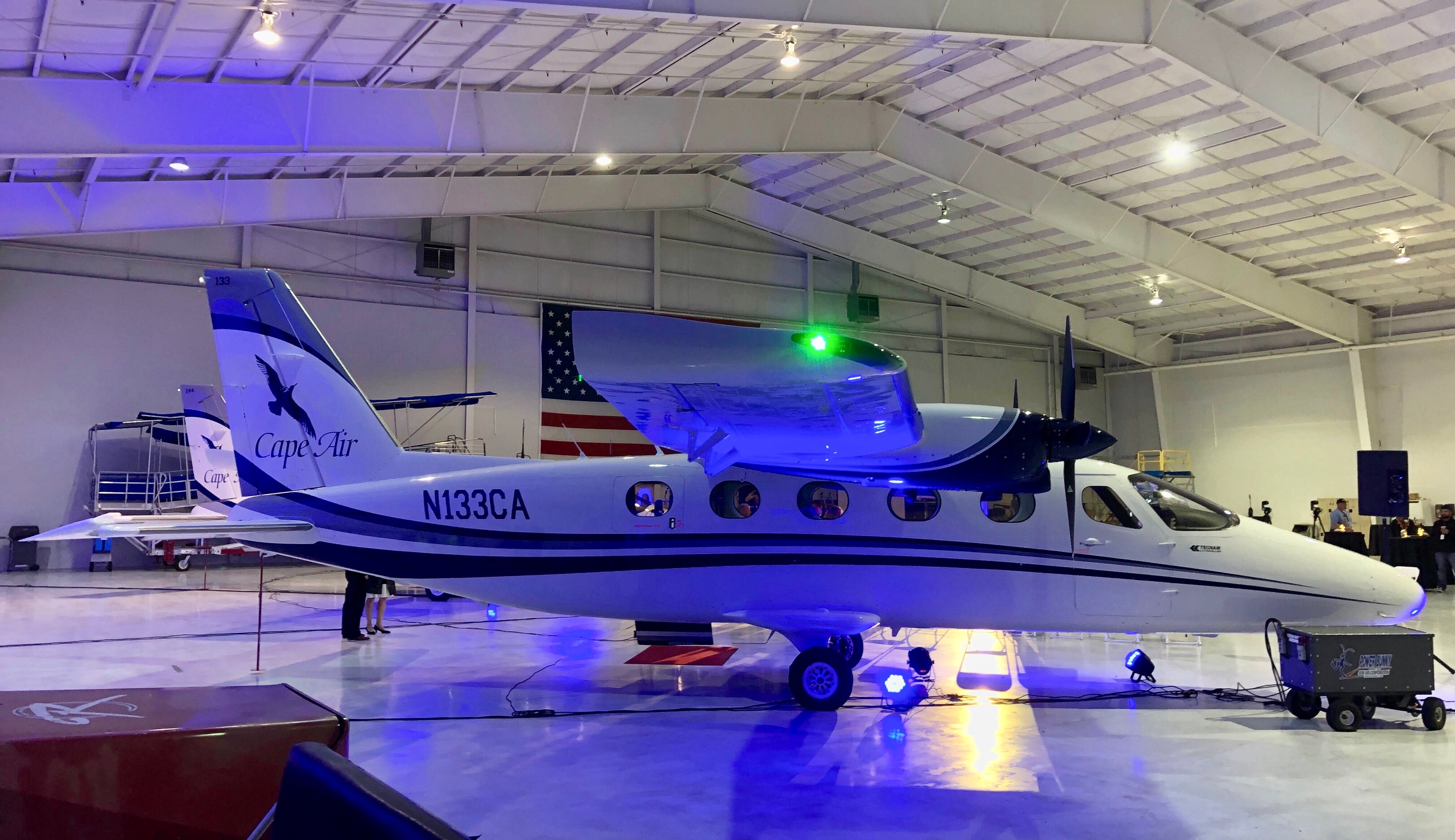 Cape Air shows off brand-new Tecnam aircraft that will replace its Cessnas
This post contains references to products from one or more of our advertisers. We may receive compensation when you click on links to those products. Terms apply to the offers listed on this page. For an explanation of our Advertising Policy, visit this page.

On this day in 1989, the Hyannis, Massachusetts-based carrier’s first flight took off from Provincetown (PVC) bound for Boston Logan (BOS) with three passengers onboard and Cape Air founder and CEO Dan Wolf at the controls.

“Thirty years ago this morning, I had for the first time ever gotten up and dressed as an airline captain,” Wolf told the crowd at an event to mark the delivery of Cape Air’s first Travellers in a hangar at Hyannis’ Barnstable Municipal Airport (HYA) on Wednesday. “I got into what then was a relatively young Cessna 402 and successfully flew what was Cape Air’s first flight between the small town of Provincetown and the hub of Boston Logan.”

The rest, as they say, is history. Cape Air has grown into what is the largest independent regional carrier in the U.S. today. The Traveller is the latest symbol of that success, a decade-long joint effort by the airline’s management and Italian airframer Tecnam to design and build a replacement for the Cessnas.

“What does building an aircraft mean?” Tecnam managing director Giovanni Pascale asked at the event. “Metal sheets, winglets, engines, propellers, some adhesive cement and a bunch of people, right? Wrong. There is only one word to express what building an airplane means for Tecnam – that word is passion.”

The clean-sheet Traveller is a step change from the Cessna for Cape Air. The cockpit is awash in glass displays that do away with the analog controls of the 402. The cabin has room for nine passengers, plus two pilots, with ample legroom and a USB-charging port at every seat. Even the aircraft’s high-wing configuration means better views for passengers.

“Our passengers will be very comfortable in this airplane, not just [with] legroom but also air,” John Peck, Cape Air's training captain, told TPG at the event as he showed off the Traveller’s air conditioning system. That's something Cape Air's Cessnas lack.

One downside, however, is passengers will not be able to sit in the co-pilots seat as they can on some Cessna 402 flights today -- a definite loss for avgeeks.

Cape Air showed off its first two Travellers at the event Wednesday. The aircraft were ferried to Hyannis from Tecnam’s base in Capua, Italy, in late September after being formally handed over in July.

The airframer aims to deliver 13 aircraft to Cape Air by year-end, and around 25 next year, Pascale told TPG.

Delivery numbers for 2020 will depend on how quickly Cape Air firms its commitments for the Traveller. The airline has 20 firm orders and 90 options, Wolf said, but added that they were already in “negotiations” for more aircraft.

“Cape Air would like to see the transition happen quicker than five years,” said Wolf when asked about the company's timeline to replace the 83 Cessna 402s in its fleet. Ideally, the airline could retire the Cessnas in three to four years, he added.

The Traveller is due to enter service on Cape Air flights between Boston and Rutland (RUT) in early December, said Wolf. That's a route Cape Air committed to in its recent Essential Air Service (EAS) contract to serve the community.

The Traveller's December debut is also dependent on pilot training, said Peck. The first class of pilots is scheduled to begin in the next two weeks, pending Federal Aviation Administration certification of the program.

The airline’s core routes to Cape Cod, Martha’s Vineyard (MVY) and Nantucket (ACK) are unlikely to see the Traveller for a while under this plan. However, Cape Air senior vice-president of fleet planning Jim Goddard added that there are likely to be some “surprises” with the aircraft operating flights unannounced.

In time, the Traveller could also open new markets for Cape Air. The aircraft, while it has comparable passenger load and range specifications to the Cessna, has roughly 20% better takeoff and landing capabilities than its predecessor, said Wolf. He explained that this means the Traveller can takeoff and land with a full load at airports with shorter runways than the Cessna.

While Wolf declined to dive into what markets the Traveller could open for Cape Air, he did say that it would improve operations in Provincetown where the runway is only 3,500 feet long. The aircraft could also allow for regular service to the airport on Block Island (BID) in Rhode Island that has a 2,500-foot runway.

Still, Cape Air and Tecnam have challenges ahead. Nearly all new aircraft face teething issues when they enter service, with issues running the gamut from supply chain issues like those that have delayed Airbus A320neo family deliveries to the groundings of both the Boeing 787 and 737 MAX aircraft shortly after their debuts.

Tecnam, for its part, is basing a technician at Cape Air's Hyannis headquarters to support the fleet and ensure entry-into-service goes as smoothly as possible, said Pascale.

“We are committed to this product," said Wolf, expressing his and Cape Air's support for the aircraft they have poured a decade into and bet their future on.