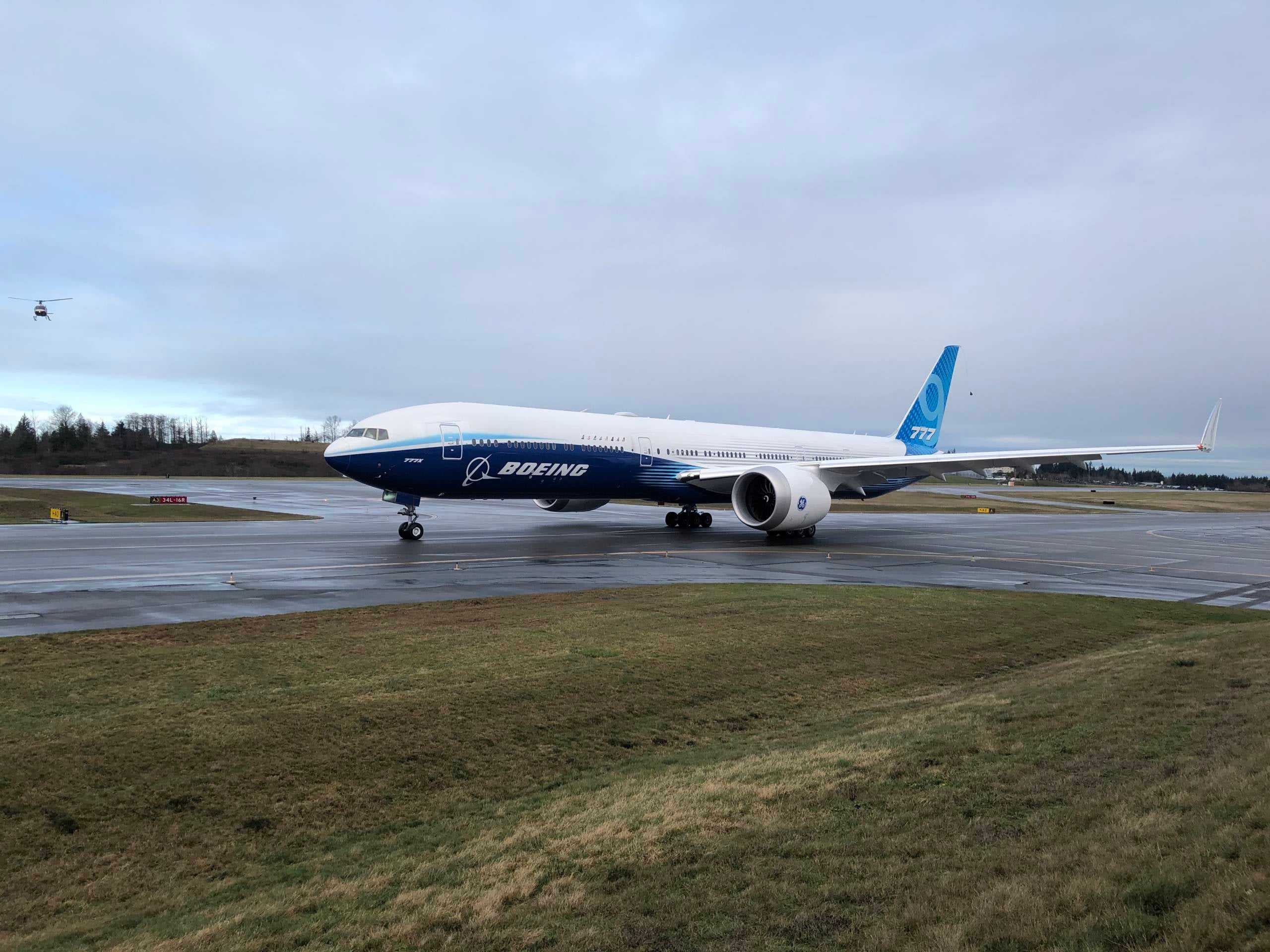 Boeing's 777X completes its maiden flight
This post contains references to products from one or more of our advertisers. We may receive compensation when you click on links to those products. Terms apply to the offers listed on this page. For an explanation of our Advertising Policy, visit this page.

Boeing’s newest flagship twin-engine wide-body has completed its first flight, with the 777X touching down after about four hours aloft.

Saturday's first flight of this new variant of the 777 -- which followed a series of false starts -- departed at 10:09 a.m. under cloudy skies from Boeing’s assembly line in Everett, Washington, and touched down at 2 p.m. at Boeing Field in Seattle.

After exiting the plane through the R1 door and descending the air stairs, Van Chaney, one of the pilots who flew the test flight, was thrilled with how the plane handled.

“It was awesome,” he said. “We would still be flying if we could be.”

The first flight of this new variant of the 777 departed under cloudy skies from Boeing's assembly line in Everett, Washington. A crowd of journalists, AvGeeks and Boeing employees were on hand, most optimistic from the beginning of the day that the flight would finally happen as planned.

The first flight originally had been planned for Thursday, then rescheduled for Friday, before ultimately being postponed to Saturday in a series of weather-related schedule changes. Craig Bomben, the co-pilot on Saturday described the delays as “very frustrating,” but ultimately said that the flight was great.

“We had enough time to do a lap around Mount Rainier,” he said, referencing the iconic peak that's visible from Seattle in clear weather.

But even with more favorable weather, it wasn’t all smooth sailing.

Bomben said the plane got bounced around by turbulence as it came in to land at Boeing Field.

During Saturday's exercise, the pilots conducted tests on the plane’s systems, including an automated retraction-after-landing feature on the aircraft’s signature folding wingtips.

This new wingtip feature is necessitated by the jet’s longer wingspan — a whopping 235 feet, which can make for a tight fit in high-traffic airports. When folded upright, the jet’s maximum width drops to just over 212 feet.

The jet’s takeoff marked the start of a new era for Boeing.

The 777X line is the latest iteration of Boeing's popular wide-body, which was first introduced in 1994.

Now, the jet will take part in a series of test flights this year as Boeing works to win Federal Aviation Administration certification for the jet to enter commercial passenger service.

It's difficult to underscore the importance of the new 777 variant for Boeing, which is already referring to the plane as its new centerpiece product.

"It's the new flagship," Wendy Sowers, a marketing director at Boeing, said during a presentation to journalists on Friday. "It's a great representation of this company."

"It is a changing of the guard," he said while waiting for the Friday takeoff that was ultimately postponed.

He added the 777X will come to fill the role that Boeing's 747 has played for 50 years as the manufacturer's biggest jet.

This newest version of of the 777 will be the biggest twin-engine passenger jet ever built, capable of seating well over 400 passengers for the larger variant that's known as 777-9. Boeing is also planning a slightly smaller variant, the 777-8, which will be able to fly farther. Collectively, the two are referred to as 777X.

Ostrower said that large capacity may ultimately work against the jet, adding that time will tell if it winds up being a commercial success for Boeing.

For its part, the company said that it's optimistic about the 777X family's prospects. During a presentation to journalists on Wednesday, Boeing predicted great demand for the aircraft as many airlines are set to begin renewing their wide-body fleets in the coming years.

The jet's development had previously been delayed by issues with the GE9X engines that power the plane. According to Boeing, those engines have such a large diameter, the fuselage of a 737 can fit inside.

Of course, Saturday's flight with the dash-9 variant covered a much shorter distance.

Boeing Field near downtown Seattle, where the plane is scheduled to land after a flight that is expected to last four to five hours, is only 26 miles direct from Everett's Paine Field, where the 777-9 departed, and although it was aloft for almost four hours, the plane stayed in the airspace around Seattle.

For Boeing, the 777X's first flight was an opportunity to cast itself in a positive light as the grounding of its 737 MAX drags on and questions about the company's safety culture continue to swirl.

"Boeing needs good news, badly," Ostrower said. "Any opportunity to show what the company does in a really big way is all part of rebuilding the public trust since the MAX crashes."

The pilots made sure to underscore how solid the plane felt, and how comfortable passengers will be when it enters commercial service. They said it will undergo a rigorous certification process before it's cleared to fly for passenger airlines.