The 'Beagle Brigade' sniffs out trouble at America's airports

Articles
Bill Fink is a senior writer for The Points Guy covering travel news, trends, and cool adventures. His award-winning stories have been featured in AARP, BBC Travel, Frommer's, Lonely Planet, National Geographic, Outside, Yahoo Travel and many others.
Follow
Sept. 07, 2022
•
6 min read 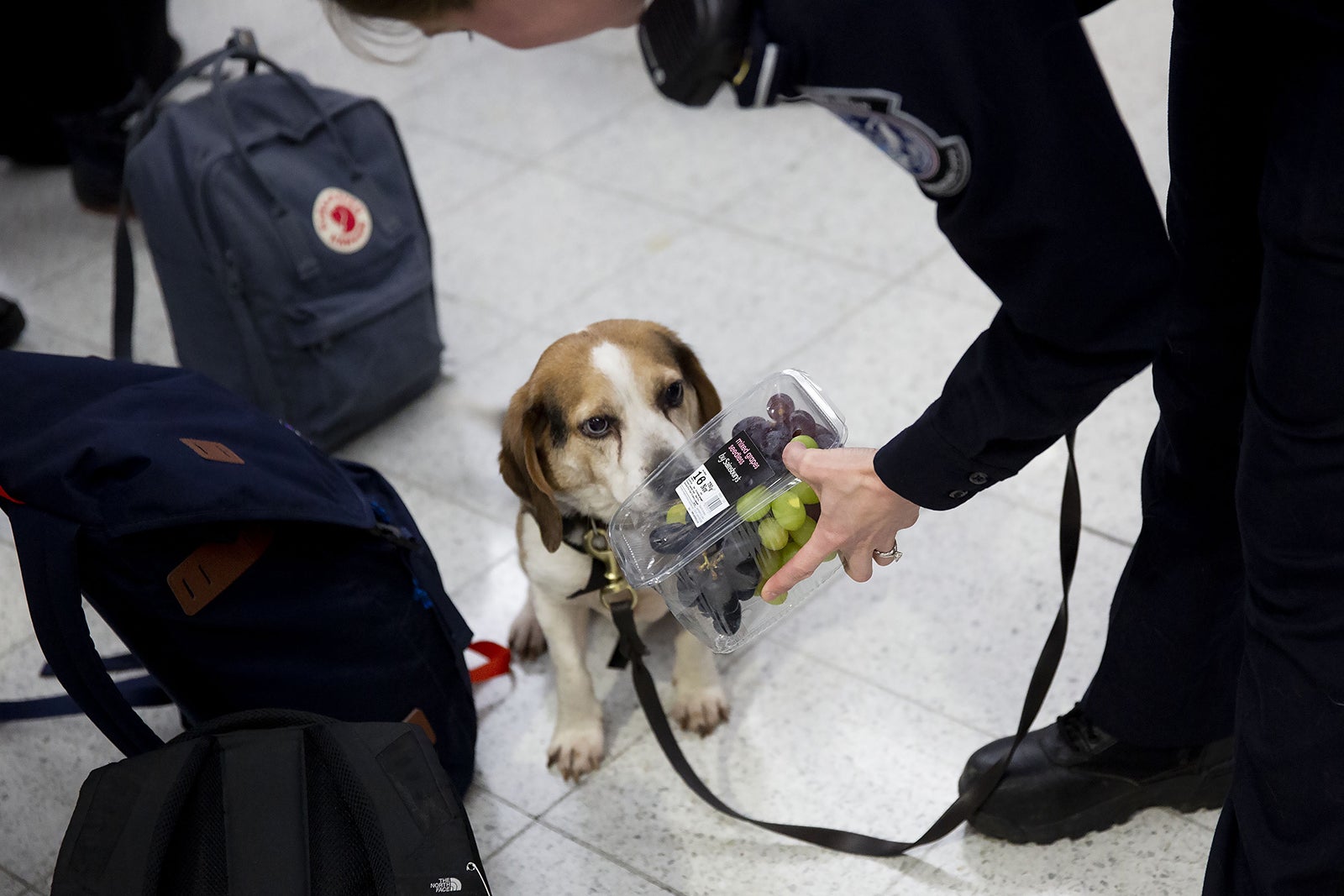 The cute little beagles you see trotting around baggage claim with a handler are often not pets or airport-sponsored therapy dogs, but rather key members of the U.S. Customs and Border Protection team.

The "Beagle Brigade," as these highly trained super-sniffers are called, patrol international ports of entry across the U.S., including in nearly every airport with foreign flight arrivals.

These charming Detector Dogs provide a key line of defense for CBP in its fight to keep harmful agricultural products from entering the U.S. — but there's so much more to know about these hard-working canines.

Here's everything to know about the Beagle Brigade and how its tail-wagging inspection process helps the country — and you — stay safe while traveling.

What is the Beagle Brigade?

The Department of Agriculture first established its Detector Dog program at Los Angeles International Airport (LAX) in 1984, according to Rob Brisley, a representative from CBP's public affairs office. The program began with a single beagle trained to sniff out harmful pests hidden in fruit, disease-carrying meats and other animal products in luggage and carry-on items arriving on international flights.

It has since expanded to include 180 "agricultural canine" teams across the country.

With the help of these trained beagles, which work eight-hour shifts, CBP can detect banned items capable of causing expensive (and potentially life-threatening) outbreaks, such as California's Mediterranean fruit fly outbreak of the 1980s. Eradicating the bugs from this one outbreak cost the state and federal governments approximately $100 million.

"Here in Chicago, we have the apple and cherry crops nearby in Wisconsin," Steve Bansbach, public affairs specialist with CBP's Chicago Field Office, told TPG. "If some pest came into the area on a piece of fruit, or a bug on a leaf, it could have a devastating effect on Wisconsin's economy."

While the number of beagles at each airport varies depending on how many international passengers are expected to arrive at that airport, all of the dogs go through extensive training at a USDA facility in Georgia.

The breed is chosen for a couple of key reasons.

"We use beagles because their sense of smell is incredible," Bansbach said. "It's like our nose on steroids."

In fact, the dogs are capable of easily smelling meat, even if it's hidden inside an air-tight thermos buried deep within someone's baggage, Bansbach said.

In Philadelphia, star Beagle Brigade members Harrie and Bowey were able to detect multiple hidden stashes of prohibited vegetables, beef, pork, fruit, plant seeds, fresh leaves and even powdered chicken bouillon in passengers' bags this month. The seizures were part of more than 96,450 items detected by the dogs across U.S. entry points this year.

Beagles also have a benefit over some other breeds: their approachable appearance.

"If we had big German shepherds or [a] Belgian Malinois getting into a passenger's personal space, it'd raise a lot of eyebrows" and could agitate already stressed travelers, Bansbach said.

Related: 11 therapy dogs — and a pig, cat and rabbit — are calming pre-flight stress at SFO

The Beagle Brigade's effect on travelers

What happens when the Beagle Brigade catches you with a rogue apple? Don't worry, you're not going to be sent to Guantanamo Bay.

If one of the Beagle Brigade dogs stops to sit next to a passenger's bag or otherwise signals its handler, the CBP agent is instructed to politely ask the traveler if they may have a food item they forgot about. If that's the case, the passenger will be advised to either dispose of it or amend their customs declaration.

"If we find something like an apple shoved inside a shirt, we'll probably let it go," Bansbach said. "If we open a bag and find 16 avocados and a thermos of beef, then we have a problem."

Depending on what you're caught with and how many previous offenses you have (if any), you may be subject to fines, citations and potentially arrest. Ultimately, it's at the discretion of CBP to decide the penalty.

"Civil penalties may be assessed for failure to declare prohibited agricultural products and may range up to $1,000 per first-time offense for non-commercial quantities. If the items are determined to be for commercial use, violations will be assessed at a much higher rate," the CBP website states.

Global Entry members and other passengers who are enrolled in Trusted Traveler Programs should be particularly aware of the agricultural customs requirements.

"We hold Global Entry passengers to a higher standard," Bansbach said. "They've gone through an interview process and should be aware of all the regulations."

If a Global Entry member is caught with a prohibited item, they may be fined (even for their first offense) and can have their Trusted Traveler Program status revoked.

Related: How to apply for Global Entry: Tips for first-timers

CBP uses the cute dogs in its Beagle Brigade to keep potentially hazardous food items from entering the U.S. The beagles' powerful sense of smell can catch even the smallest and most well-hidden foods that come into baggage claims and customs areas.

While penalties, including fines or even arrest, may be issued to passengers who do not properly declare items, most travelers who enter the U.S. have nothing to worry about. Should you forget to mention an item when clearing customs, promptly and politely admit your mistake and dispose of the food item right away. Your honesty will likely help you out in the long run — though what happens next will ultimately depend on the CBP agent you speak with.

While abiding by CBP's rules means you likely won't directly interact with a Beagle Brigade member, doing so will ensure these furry agents can devote their time to carrying out their duty to keep the country's agricultural economy safe.