Articles
Emily McNutt is The Points Guy's Global News Editor and is based in London.
Follow
April 11, 2019
•
14 min read 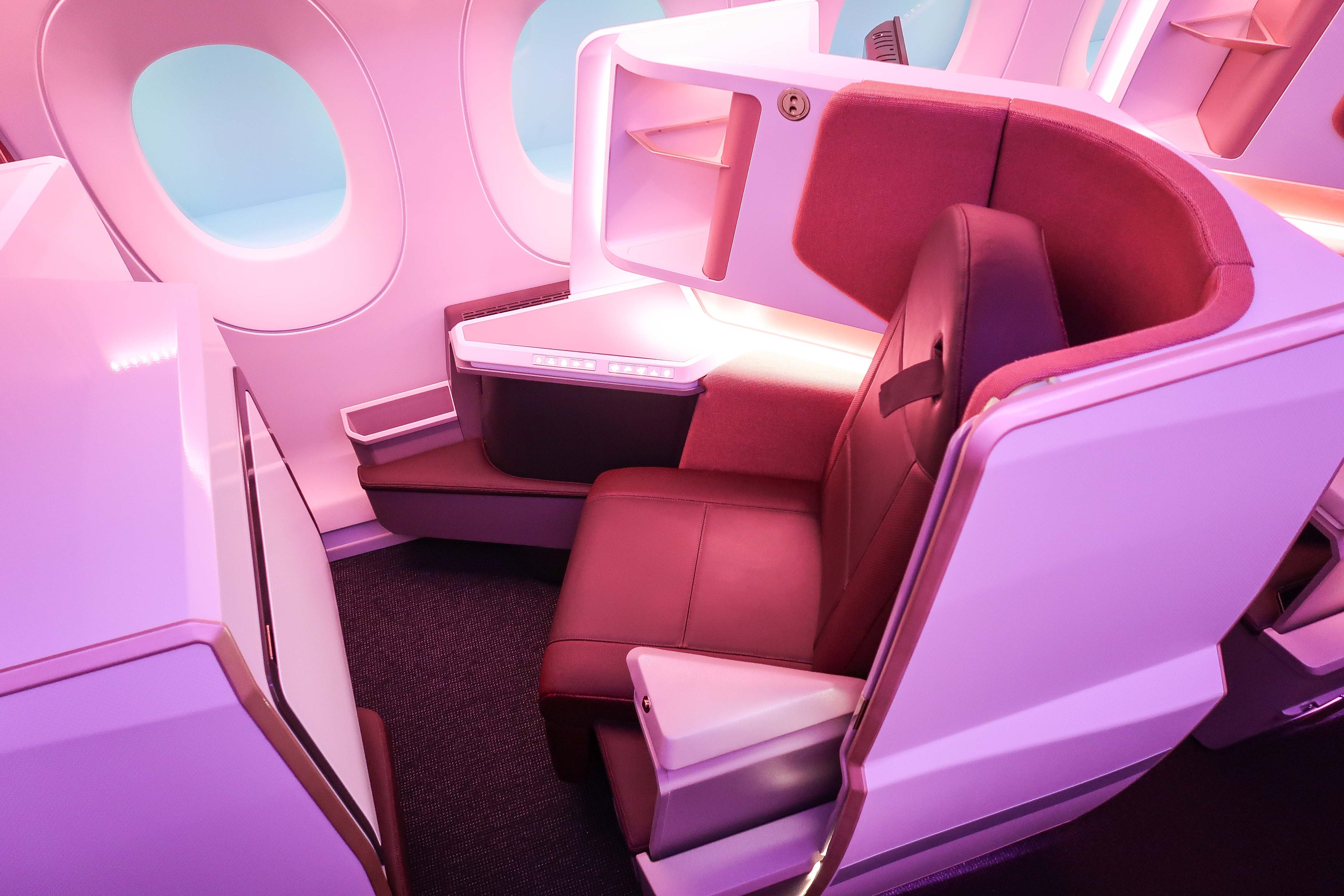 Just a few weeks apart, both major UK-based airlines have gone from having dated, subpar premium-cabin offerings to launching two new products that look like they can hold their own against the best. In March, British Airways unveiled its update to the significantly dated Club World seat with the Club Suite, and just on Monday, Virgin Atlantic introduced its Upper Class suite product.

Both the Club Suite and the Upper Class suite will be introduced on the Airbus A350 aircraft that BA and Virgin have ordered. And because we haven't been on board either of the aircraft and have therefore not yet been able to test the new products -- neither carrier has taken delivery of its new Airbuses yet -- it's hard to tell how they will stack up against each other.

But based on what we know already, we can already make a comparison on paper. Both A350s will be the -1000 version, the largest of the two currently on offer.

British Airways' A350 will feature a total of 56 seats in the Club Suite cabin spread across two cabins, while Virgin's A350 Upper Class suite cabin will feature 44 seats in a single cabin.

At a quick glance, the Club Suite cabin looks bright and airy. With a higher center ceiling with not quite as deep of overhead bins, the cabin feels more airy. The feel is in general modern and fresh. BA chose to utilize charcoal as its main color for the seat, with white stitching. Throughout the cabin, passengers can expect soft hues like gray and white.

It's worth noting that neither BA nor Virgin opted to go with cathedral ceilings on their A350s. The overhead bins in the center of Virgin's cabin make it feel a bit more cramped, but the added storage space will be welcome given the lack of real storage in the seat.

Virgin chose to go with predominantly white surfaces in the Upper Class suite. The upholstery of the seats will feature the iconic Virgin Atlantic red color in two different shades of Claret leather. Because of the cabin lighting and colors in the cabin, it feels bright inside.

The 44 seats in Virgin's A350 Upper Class suite cabin are arranged in a 1-2-1 configuration, meaning each passenger gets direct aisle access. Unlike the existing Upper Class product in which the window seats face inward and away from the window, forcing passengers to crank their neck in order to see outside, the new product faces toward the window. Virgin said that was one of the most common complaints about its current product, and the relatively small change will make a big difference in the passenger experience — especially for AvGeeks.

Similarly, BA's Club Suite on the A350 will also be arranged in the preferable 1-2-1 configuration. The configuration is many steps above the current Club World product, which positions seats in a 2-4-2 ying-yang configuration and limits aisle access to those who are flush against the aisle.

Both the Virgin and BA seats are far better than the existing products. For Virgin, that means not requiring passengers to stand up in order to manually convert their seat to lie-flat mode. And for BA, that means the introduction of fully closed suites, offering excellent privacy.

That's the biggest difference passengers will see between the two products. Each suite features a door that closes nearly fully with the exception of about a one-inch gap. The door must be opened and closed manually, and must be in the open position for taxi, takeoff and landing. Along with three pre-set seat positions, BA's also installed a useful touchpad that allows you to customize just how you want your seat to be situated.

In the new Upper Class suite seat, Virgin opted to stick to its roots and go with the more social-friendly option. Instead of opting for a fully closed suite with a door, it instead chose to give passengers a privacy partition, which closes about one-third of the width of the suite entrance. The partial door provides a decent amount of privacy, but also won't let passengers to completely isolate themselves.

That was Virgin's intention. As the airline's CEO Shai Weiss told the Telegraph, "The people who love us, we love them right back and that means we have to be able to see them."

Passengers who have flown on the airline's current Upper Class product know that already is the case. To the disappointment of some, Virgin's chosen to keep that approach and not offer a fully closed door like its close partner Delta Air Lines offers with its Delta One Suite.

The door/no door debate is where the two products perhaps draw the greatest difference. With legroom the same, width nearly identical (BA narrowly outdoes Virgin's), and with bed length similar in measurement (Virgin narrowly outdoes BA's), the major difference is that door. Additionally, the Club Suite offers a great enhancement when it comes to in-seat storage. There are three compartments located inside the seat, and the space underneath the ottoman is certified to allow passengers to store larger goods — such as bedding or larger personal bags. Virgin missed an opportunity to offer more in-seat storage. Instead of offering true compartments in which passengers can securely store items like phones and passports, the Upper Class suite instead offers just a few shelves. Larger items will need to go in the overhead bins.

So, which hard product is better? That depends on what kind of flyer you are. All other factors being equal, passengers looking for privacy will lean toward the BA Club Suite. People seeking a more social, open experience will likely opt for the Upper Class suite. Ultimately, both products look to be a true upgrade compared to the current offerings, which are really outdated.

Since both of these aircraft will be flying on long-haul routes for the carriers, inflight entertainment will be an important part of the passenger experience.

British Airways says that one of the complaints about its current Club World seat is that the screen cannot be used from gate to gate, since it swivels and must be stored for taxi, takeoff and landing. The 18.5-inch touchscreen monitor in the Club Suite is installed in the seatback and can be used for the duration of the journey. Virgin, on the other hand, decided to go with a pop-out-type IFE screen for its Upper Class suite. Currently, the design does not allow it to be used during taxi, takeoff and landing, however, the carrier is attempting to get certification to allow passengers to utilize the 18.5-inch touchscreen throughout the flight.

In addition to the in-seat entertainment, Virgin's also introduced a common-area TV. The 32-inch screen will be prominently displayed in The Loft and will offer content made specifically for the airline, though what exactly that is has yet to be decided. Much like the in-seat IFE system, Virgin's allowing passengers to use Bluetooth to stream audio from The Loft TV content through their own Bluetooth-equipped headset.

When it comes to IFE as a whole, Virgin's taken the more innovative route. While the exact content has yet to be determined, the Bluetooth and added communal TV in The Loft will likely help set the Upper Class suite apart -- especially if and when it will be certified from gate to gate.

Virgin's long been known to offer a bar for passengers to sit or stand at and mingle while in flight. With the A350, the carrier is completely doing away with that concept, instead replacing it with "The Loft."

The Loft is meant to bring the Clubhouse lounge experience to the skies. It features two red couch-like seating areas, which are meant to offer a social setting on the plane. It has the capacity to fit eight customers, five seated and three standing. The Loft comes equipped with seatbelts, so passengers won’t have to return to their seats if the plane encounters turbulence. Additionally, The Loft is equipped with both USB and power ports so you can charge your devices away from your seat. Cabin crew will be able to serve food, drinks and tea service.

BA hasn't announced any lounge areas on board its A350.

It should also be noted that instead of just installing the Club Suite on the new A350s, BA's also retrofitting some of its existing aircraft. By the end of 2019, two Boeing 777s will have the new Club Suite product, and beginning in 2020, BA will continue to retrofit other long-haul aircraft in its fleet — but not its aging 747s. Additionally, each new aircraft the airline takes delivery of — including the recently ordered 777-9 — will feature the new Club Suite product.

Virgin isn't yet planning on installing the Upper Class suite on any aircraft other than the A350. It's waiting to see how the product is received before unveiling plans to retrofit any of its existing long-haul fleet.

BA is firm on its stance to keep its soft product the same — from the White Company bedding to the amenity kits. Meanwhile, Virgin is keeping the option open to redevelop its soft product offering, though nothing has yet been made official.

British Airways expects to take delivery of the first of the aircraft in July, though an exact date has not yet been set. Initially, the A350 will fly short-haul between London and Madrid for crew to familiarize themselves with the aircraft and new product. Then, as of Oct. 1, the aircraft will fly to Toronto and then as of Oct. 7, to Dubai. However, since there is only expected to be one A350 in the fleet at that time, not every London to Toronto and London to Dubai flight will get the new product.

While an exact date has yet to be set for the delivery of Virgin’s first A350, the airline says that it’ll sometime in “late summer 2019.” The first of the A350s will operate on Virgin’s flagship route between London Heathrow and New York JFK. Following the introduction of the LHR-JFK route, it’ll also operate between LHR and Atlanta.

British Airways has chosen to level itself with other carriers, such as Delta and Qatar, that offer fully closed suites in business class. For the flyer looking for maximum privacy, the Club Suite looks to be a competitive product. Virgin has maintained its party-inspired outlook with the exclusion of a door to encourage passengers to be social. One could draw the conclusion that the carriers are targeting a different clientele in their business-class cabins.

Be sure to check out our other stories for a more in-depth look at the Virgin Upper Class suite and the British Airways Club Suite. Stay tuned to TPG for more information on the roll-out of each of the carriers' A350s and full reviews once they enter service.