Azamara has changed its signature destination-focused programming due to COVID-19, and passengers love it

Articles
Ashley Kosciolek has spent more than a decade writing about travel, with particular emphasis on cruises. Her favorite cities include London; Amsterdam; Krakow, Poland; Phnom Penh, Cambodia; Dawson City, Yukon; and anywhere known for outstanding pizza and theater. You can follow her daily exploits, both at sea and on land, on Instagram or Twitter @slyjabroni.
Follow
Sept. 02, 2021
•
7 min read 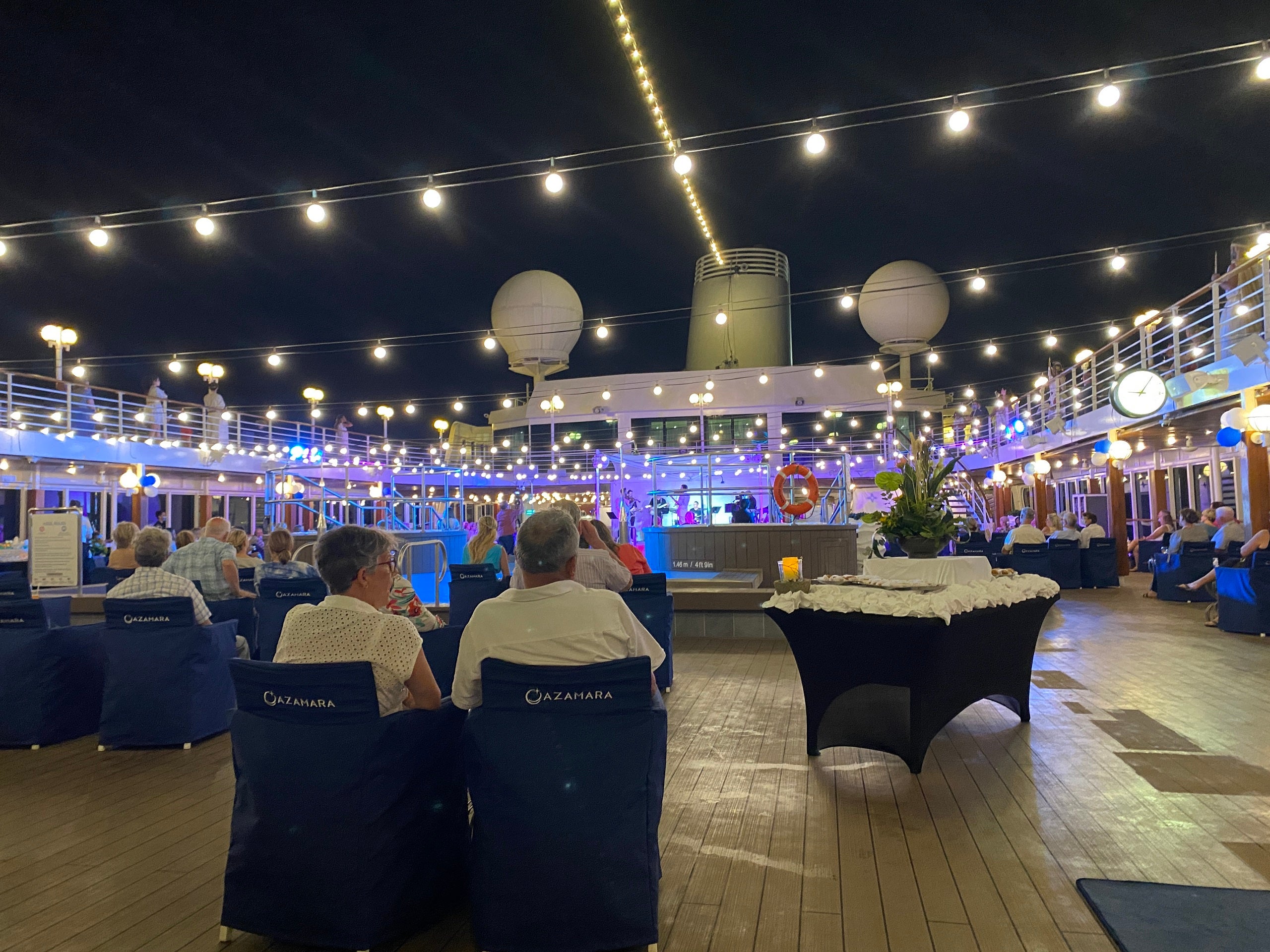 TPG's Ashley Kosciolek is sailing on Azamara Cruises' Azamara Quest as a guest of the line. The opinions expressed below are entirely hers and weren't subject to review by Azamara.

Azamara Cruises finally resumed sailings this week after a 17-month hiatus caused by the COVID-19 pandemic -- a period that saw it sold to a new owner. But due to ongoing COVID-19 restrictions in the places it sails, logistical issues and the need to keep passengers socially distanced, the destination-focused, small-ship cruise line has been forced to alter one of its signature destination-immersion activities, AzAmazing Evenings.

AzAmazing Evenings are free nighttime excursions offered to passengers on most voyages. Under normal circumstances, the ship will stay late in port, allowing Azamara to transport cruisers to a special venue for a performance or activity that highlights the local culture. Examples include concerts under the stars at the centuries-old ruins of Ephesus in Turkey, acrobatic performances in Monaco and nights out at the St. Petersburg Symphony Orchestra in Russia.

Now, for safety and logistical reasons, all sailings until at least January will have what the line is calling Destination Celebrations instead of AzAmazing Evenings. The celebrations will gather passengers on the pool deck for snacks, drinks and concerts by local performers.

Why it's temporarily changing

The change is temporary, Azamara president Carol Cabezas told TPG this week during an interview on board Azamara Quest, the line's first vessel to sail in 17 months.

"With the current environment, some things we've had to adapt," Cabezas said, referring to the temporary AzAmazing Evenings hiatus. "... [Destination Celebrations] will bring the culture to the guests onboard .... Historically, we would take the guests out to a particular venue. Because of the [COVID-19] situation, we can't do that anymore. I don't know how long that will [last], but we remain committed to providing some of these signature types of product deliveries that allow us to really support the destination immersion promise that we make to our guests."

Cabezas explained that the logistics are simply too cumbersome right now. In addition to having to worry about social distancing for a ship full of passengers during a single shoreside event, as well as how to get them to there, she said that many of the venues with which the line previously worked require bookings to be made as far as 18 months in advance -- something to which the line couldn't commit because it didn't know exactly when sailings would resume.

But Cabezas is confident passengers will be impressed.

"We've added lots of special touches and elements that I think the loyal guests who are familiar with what we've typically done are going to appreciate, as well as the newbies," she said. "Of course, what better scenery than a Greek island as your backdrop?"

On this week's sailing of Azamara Quest -- a Greek Isles voyage from Athens with stops at Cyprus, Rhodes, Crete, Mykonos and Santorini -- the first Destination Celebration took place at Rhodes, where the ship remained docked until 10 p.m. The captain kicked off the event that night at 8:15, and drinks were provided, along with a selection of pastries, including baklava.

From there, a group of actors dressed as Greek gods and goddesses appeared to welcome the crowd, and Duo Violins, a Greek string duet, performed under glowing globe lights with Rhodes in the background.

In its entirety, the celebration lasted 75 minutes. The performance was wonderful, and the baklava was tasty, but the wind was so strong that unused chairs set up for the show were blowing across the decks, along with stray napkins.

When I returned to my cabin, I had a small bag of Greek-themed goodies -- olive oil soap, olive oil, oregano, and candy -- waiting for me, which was a nice touch.

What passengers are saying

My first thought was that, although the show was excellent, the only difference between it and any other onboard performance -- yes, other cruise lines do bring local talent onto their ships to perform -- is that it was outside, which doesn't necessarily make it Greek.

The ship stayed docked in port until 10 p.m. for the event; to me, spending that extra hour or so in port, instead of onboard, would have been more culturally immersive. However, I don't fall into Azamara's typical demographic, and I haven't cruised with the line before (meaning I haven't experienced an AzAmazing Evening in order to say, first-hand, how the new concept stacks up).

I spoke with several fellow cruisers who have sailed with the line before; they agreed that the show was spectacular and said it was a decent substitute for AzAmazing Evenings. When I asked whether they would have rather spent the extra time ashore, they said no, noting that the traditionally older clientele on Azamara's ships would likely have returned to the ship on the early side anyway, even if the celebration hadn't been scheduled.

Surprisingly, a few passengers I spoke with said that they aren't excursion people and prefer to explore on their own in port, even if the excursions -- like AzAmazing Evenings, which a few admitted they had never tried, despite being avid brand loyalists -- are included in the price of the cruise.

The Destination Celebrations are a noble attempt by Azamara Cruises to honor the promise of destination immersion it has made to its customers. The initial performance was fabulous and had passengers (including me) dancing in their seats. That said, just don't expect these offerings to feel overly cultural or to have the same "wow" factor as AzAmazing Evenings.

TPG’s Ashley Kosciolek is reporting live from the first Azamara Cruises sailing in 17 months. You can find all of her dispatches on her author’s page.

Related stories
December 2022
Current Hyatt promotions: Bonus points on stays and dining plus double stay credits
Last chance: Earn 75,000 Rapid Rewards points with these Southwest card offers
Quick Points: Triple stack these offers to maximize your next Lyft ride
Featured image by (Photo by Ashley Kosciolek/The Points Guy)
Editorial disclaimer: Opinions expressed here are the author’s alone, not those of any bank, credit card issuer, airline or hotel chain, and have not been reviewed, approved or otherwise endorsed by any of these entities.