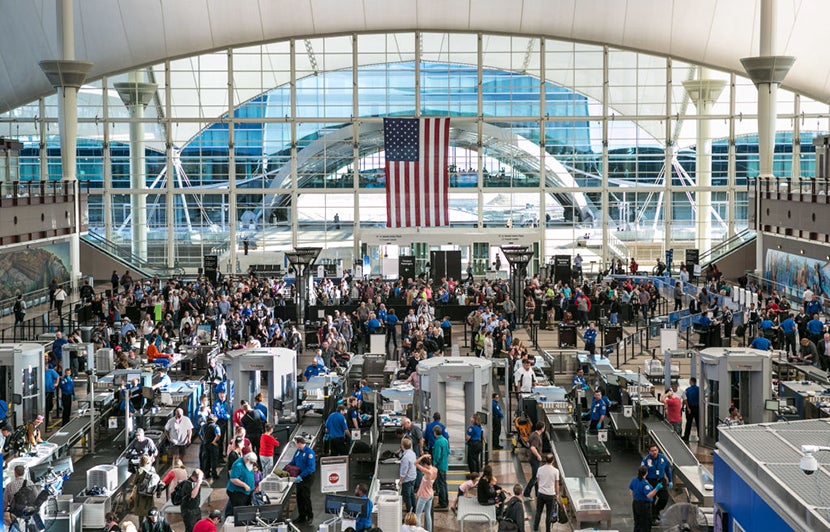 Are Shutdown TSA Check Point Wait Times Really That Bad?
This post contains references to products from one or more of our advertisers. We may receive compensation when you click on links to those products. Terms apply to the offers listed on this page. For an explanation of our Advertising Policy, visit this page.

As the government shutdown passes the 30-day mark — the longest and still counting in US history — the impacts of the shutdown are being felt throughout the aviation sector. Everything from carriers not being able to launch new aircraft, passengers not being able to apply or renew for Global Entry, impacts to opening entire airports and the overall safety of the entire system.

One of the most visible and most widely reported aspects of the shutdown deals with the TSA and its employees who are working without being paid. The Canadians have pitched in to help their colleagues to the South, and there has been a growing effort to help the unpaid workers. This weekend saw the number of TSA agents that didn't show up for work hit the highest rate so far at 8% on Saturday and 10% on Sunday. Last year over the same period, that rate was around 3% according to the TSA. The TSA has admitted that the financial burden on the employees is causing the spike in people not showing up for work.

The TSA has activated the National Deployment Force (NDF). This is a group of agents normally deployed to supplement TSA staff for large events like the Super Bowl or to deal with increased passenger numbers due to natural disasters. These agents have been dispatched to airports across the country to help supplement the current staff.

What Does This All Mean For Your Travel Plans?

For now, the TSA seems to be taking the shutdown in stride. There have been reports of general sporadic delays, but overall the TSA seems to be meeting its own standard for wait times even with agents not showing up for work. It's unclear though how long the TSA will be able to keep this up as the shutdown drags on with no end in sight and the possibility of more workers missing work days.

For travelers, the more immediate question is "How will this impact my travel?" The TSA released its stats for this weekend via Twitter. The report says that on Saturday the TSA screened 1.6 million passengers. Of those travelers 99.9% saw a wait time at the TSA check point of less than 30 minutes and 93.8% waited less than 15 minutes to clear security. For those with PreCheck, the wait time was less than five minutes. On Saturday the longest wait times (non-PreCheck) were reported in Minneapolis (MSP) with a maximum time of 41 minutes. Of the top 42 US airports the TSA releases numbers for, MSP was the only one that had wait times above the TSA standard of 30 minutes.

While there have been reports of long @tsa lines at various airports, my experience with Pre-check has been business as usual (5-10 mins) for my 10 flights this past month. What has your experience been?

On Sunday the numbers were about the same. The TSA screened 1.78 million passengers. Once again 99.9% of passengers waited less than 30 minutes while 93.1% waited less than 15. The wait in PreCheck lines averaged only five minutes. Of the 42 airports the TSA released numbers on New Orleans (MSY) saw the longest wait times at 45 minutes, followed closely by MSP at 35 minutes, LaGuardia (LGA) at 29 minutes, and Tampa (TPA) at 28 minutes.

Overall the TSA standard goal of 30 minutes or less is being met in almost all major airports across the country.

What to Know Before You Go:

There are a number of options to help you stay informed about airport conditions and to clear security faster if you have upcoming travel plans.

If you want to see the average wait time for a given timeframe at an airport, or you want to see what current wait times are, you can check out the MyTSA app, which is available for iOS and Android. With the app you can see the historic average wait times for a given time frame as well as current wait times being reported by other users of the app. Another handy feature is the app also integrates information from FAA about any current delays being experienced at the airport.

Getting PreCheck is a straightforward process and some credit cards include PreCheck for free. If you are interested, check out our guide for everything you need to know. While the Global Entry program isn't currently processing applications or taking appointments, you can still apply for PreCheck as its funding is provided by user fees. PreCheck will cost you $85 for five years of enrollment.

CLEAR is yet another tool you could have in your travel bag to help you clear security faster. The longest part of getting through the two stages of security is often reaching the first TSA agent who checks your ID and adds some hieroglyphics to your boarding pass with their pen. For members of CLEAR you can check in at a CLEAR kiosk, then be taken by a CLEAR agent directly to the second stage of security where your bags actually get screened. This can save you a tremendous amount of time.