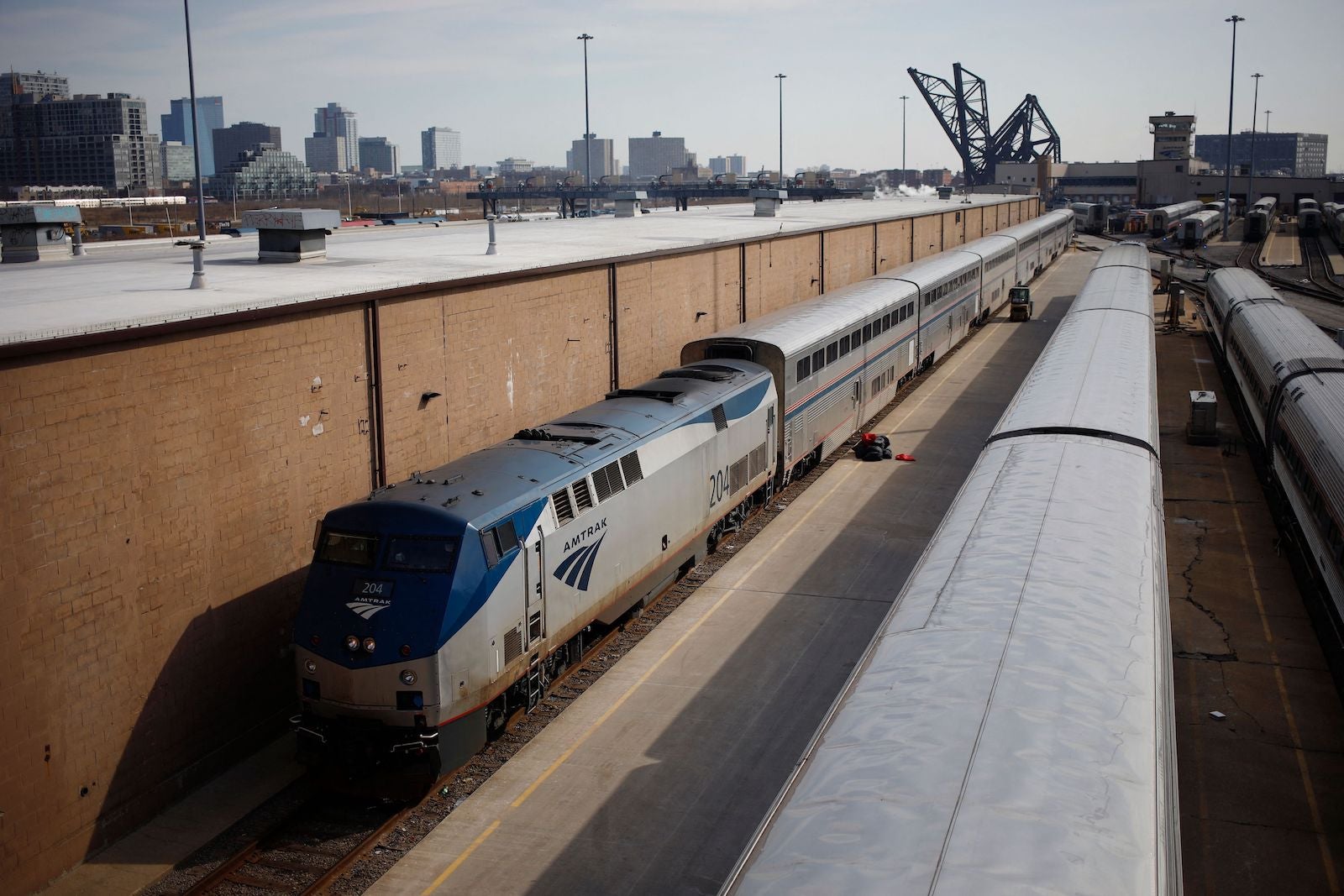 From crowded airports to busy beaches and tourist destinations across the U.S., this weekend’s numbers confirmed what we’ve expected for months: The travel surge is here to stay — for the coming few months at least, as the summer travel season begins in earnest.

U.S. airports have recently seen several of their busiest days of the COVID-19 pandemic, and drivers are leaving home despite record-high gas prices. There’s another section of the travel industry seeing demand like it hasn’t since before March 2020: America’s rail operators.

A longtime staple for business travelers, ridership on trains plummeted during the worst days of the COVID-19 pandemic, just as it did on airlines. Now, the crowds are returning, but the clientele is a bit different.

Subscribe to our daily newsletter for more TPG news, deals and points and miles tips delivered each morning to your inbox.

Plus, Amtrak announced new, targeted services aimed at leisure travel. Combine these elements with the fact that America’s rails are getting an infusion of more cash than ever before, and it all seems to herald a time of change for train travel.

Ridership returning, but in a different way

With the summer season almost upon us, industry leaders say train travel is returning with a "vengeance."

After two-plus tumultuous years for ridership, Amtrak is seeing bookings for some weeks at about 80% of pre-pandemic levels, with ridership at around 70%, the company shared with TPG on Friday. Some days, passenger traffic in and out of New York City competes with pre-pandemic levels, the rail operator added.

It's not an easy comparison when you consider the 30 million people who rode the train in 2019 — Amtrak’s best year ever. However, spokesperson Jason Abrams said leaders are confident that demand and “love for train travel hasn’t gone away” in the years since.

Still, demand is surging. President and CEO of the Rail Passengers Association Jim Mathews likes to call it “revenge travel." In other words, travelers are trying to make up for time lost over the last couple of years.

Mathews told TPG the recovery of travel “across the board” has spilled onto the country’s rails. Many travelers also have a desire to ride not just in coach, but in more "deluxe" accommodations like family rooms and sleeper bedrooms.

The only problem, according to Mathews, is that an unbalanced supply and demand equation, fueled by an industry workforce shortage, has made those accommodations often difficult to find and more expensive as a result.

“It’s terrible when everyone’s running for the door at the same time and they can’t get in,” Mathews said. “They just don’t have the humans to get all the equipment out on the road.”

It seems to be the factor this spring that keeps him up at night, particularly at a time when so many are trying out train travel for the first time.

Related: What it was like riding Amtrak’s Acela first class during the pandemic

A shift in who’s on board

Board an Amtrak train between Washington, D.C., and New York City on any weekday morning in 2019, and you were sure to find cars full of business travelers making their way between the two cities.

However, as the pandemic moved meetings, conventions and even court hearings online, ridership dropped off in ways seen throughout the travel industry.

We already know that ridership is rebounding, but it’s with a different-looking clientele.

During the month of April, 31% of Amtrak train passengers were travelers the rail operator deemed "new riders." The company noted a shift from business travel to leisure travel, including on some of its busiest routes such as the Northeast Corridor’s Acela.

If you ask an Amtrak representative, it makes sense. Amtrak trains can drop you off within walking distance of the National Mall in Washington, D.C., with no traffic. They can also place you in midtown Manhattan with no need for a taxi ride (or any other patchwork of ground transportation you’d need to get from New York City’s airports to its most popular tourist attractions).

It’s not to say people are just taking the train for fun, either, Mathews was quick to point out.

“It’s not really business travel, per se, but it’s not exactly, ‘Hey, let’s go see the country' either," he said of the current trends. As an example, he mentions a college student trucking home 200 pounds of luggage: This person might choose a train instead of an airline (to avoid security checkpoints and rising airfare) or a car (due to record gas prices).

“It’s hard to describe it as leisure travel, but it’s not really commuting, either,” he said.

In other words, train travel as an option has, almost, begun to occur to a younger generation.

It’s a phenomenon he believes represents an opportunity for rail operators.

Looking to the future

You can’t think about the future of train travel in America without considering the $66 billion in funding for rails authorized in the 2021 bipartisan infrastructure bill passed by Congress.

Amtrak alone is approved for more than $20 billion of that money, with tens of billions more to be doled out by the Federal Railroad Administration in grants.

For Amtrak, the money through this bill is greater than every dollar it had previously received in its 51-year history, Abrams said.

Just that amount of money means big changes are on the way.

This summer, for instance, Amtrak is beginning $130 million worth of construction along the critical Northeast Corridor, updating dozens of track switches between Washington, D.C., and New York. Crews will also replace about 25 miles of track along the corridor, according to an announcement Friday from Amtrak.

Mathews sees an opportunity in the recent travel trends to continue appealing to new riders — particularly as some jobs have shifted to be permanently remote.

This could mean new service, or it could mean reminding riders (or potential new riders) how trains can be an ideal option to get to those places they want to visit, Mathews said.

In recent weeks, for instance, TPG reported Amtrak is piloting a new direct, summer weekend service between New York's Penn Station and the Berkshires in Massachusetts, called the Berkshire Flyer. Amtrak sees it as a way to avoid city traffic and give New Yorkers an opportunity for a peaceful weekend getaway. As novel as the service is, though, it will use existing trains and tracks while Amtrak evaluates potential upgrades in the future.

Does Mathews see this as the type of service travelers can expect in coming years?

"Perhaps," he said, but countered.

“Say you’re in New Jersey and [think], ‘It might be fun to go to Colonial Williamsburg in Virginia,'” he said. “Amtrak’s got a train that already does that.”

His point? It’s about reminding travelers of the options out there.

“These trips already exist,” Mathews said. “It’s sort of a discovery for some people that this has been around for decades, and they never really thought of it.”

His view of train travel, years down the road, is that Amtrak will still serve a large business travel clientele as well as some others.

"Are we past the days of the Acela being 98% full of lawyers and bankers paying $300 each way? Yes. Those days are gone,” Mathews said. “But maybe 40%? Maybe. Who knows ... and the rest will be made up of students, family members going back and forth, or people who have a hybrid [work] arrangement.”

At a time when travel is surging in seemingly every way possible, America’s rails are also getting a lot busier.

It’s clear, though, that the pandemic had a major impact on who’s on board. As the industry approaches years of rapid change brought on by new riders and a whole lot of money, industry leaders see an opportunity to make rail travel an increasingly relevant option for the next generation of riders — and not just for workers.

Related stories
Here are the best Black Friday travel deals of 2022
Great deal: Book business class tickets at premium economy prices with this Avianca LifeMiles sale
Holiday gift guide: TPG’s 22 travel-friendly picks for 2022
Vail Resorts lift-ticket sales capped; buy your Epic Pass by Dec. 4
Featured image by AFP via Getty Images
Editorial disclaimer: Opinions expressed here are the author’s alone, not those of any bank, credit card issuer, airline or hotel chain, and have not been reviewed, approved or otherwise endorsed by any of these entities.